It’s tempting to label Quantum Break as Microsoft’s answer to The Order: 1886 – another example of hugely impressive, cutting-edge technology in service to a deeply mediocre game. Tempting, but wrong. The frustrating thing about Remedy’s long-awaited Xbox One showcase is that it has some brilliant mechanics and well-paced action lurking underneath its stunning visuals, but it’s flawed, and sometimes tiresome with ideas that feel under-developed. It’s rarely as boring or infuriating as The Order, but it’s not quite the game it should have been.

At one time, things looked different. Quantum Break was to be the game that cemented the Xbox One’s place as the all-in-one entertainment centre of the future, bringing together the worlds of TV and game together in one compelling cross-media experience. As it happened, the companion TV show was cancelled, leaving us with short 22-minute episodes that do little more than fill-out the storyline of the game. They’re supported by a series of junction chapters which punctuate the game’s five acts, your binary choice in each one affecting the flow of the storyline in both TV episodes and the game. 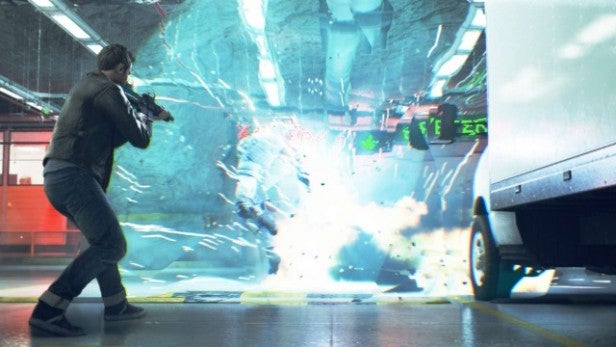 Frankly, you can see why the idea never really reached its full fruition. The junctions affect the content and the tone of the TV episodes and game sequences, but in the end the narrative can only be pushed so far: Deus Ex or Mass Effect this ain’t. Meanwhile the TV chapters are curiously unengaging, focusing on secondary characters you don’t get the time to know, let alone care about. They feel divorced from the gameplay rather than a central part, while the production values are, in some ways, eclipsed by those of the game.

The good news is that the game itself is better, following Jack Joyce (played by X-Men’s Shawn Ashmore) as he gets involved in a time travel experiment gone wrong, then finds himself on the wrong side of the sinister Monarch Corporation and its surprisingly extensive private military force. At first, Quantum Break appears to be your standard third-person cover shooter, but as you blast your way out of a university campus it becomes clear that there’s more to it. The incident has given Jack powers over time, and as endless Monarch goons assault you in each location, you’re going to need each and every one. 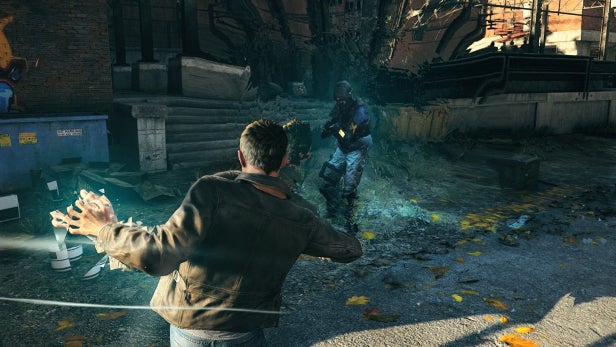 For a start, Jack can freeze time in a local area, halting one or more foes mid-motion before filling them with hot, exploding lead. Tap the left bumper and he can sprint at lighting speed from one position to the next, pausing to target enemies and take them down along the way. Hold the left bumper and he can sprint for longer distances; ideal for last-minute, blink-and-you-miss-him getaways. Press the B button, meanwhile, and Jack’s time shield can stop bullets in their tracks.

The reason you’ll need these powers is that Monarch’s troops are not only numerous, but also highly mobile. Not for them the old duck-fire-duck shooting gallery routine; they like to outflank you, rush you and generally keep you on your toes. And as you explore your powers, you come to realise that this is what Quantum Break brings to the genre – not just some cool slow-mo, freeze-frame, bullet-stopping powers, but a pace and tactical mobility that few cover-based shooters can match. Not that the powers aren’t cool, of course. Freezing a sniper in a time bubble, riddling him with bullets, then watching them make impact never gets old. The game even throws in a cheerful zoomed-in, slow-motion killshot to celebrate the wave’s last foe going down. 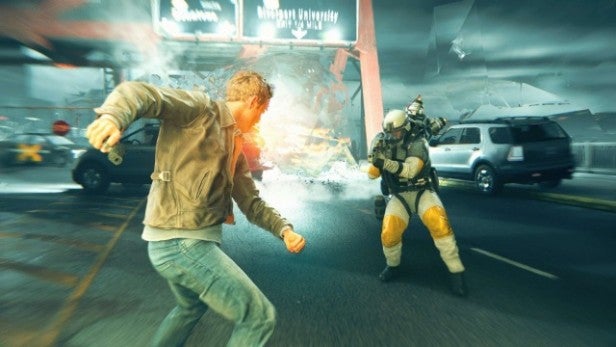 Yet Quantum Break’s spectacle is only getting started. Early on you’ll find chunks of the scenery trapped in some weird quantum state, allowing you to rewind the effects of time so that a crate dropped from a crane becomes a makeshift lift, while a stuck truck provides passage through an impassable barrier. You’ll also encounter stutters – large areas where time is stuck, the people, objects and explosions inside them frozen as you move freely around, or looping backwards and forwards, never quite moving on in time. Oddly enough, stutters seem to happen most where there’s a chance for serious spectacle, as huge cargo ships wreck city bridges or an explosion goes off in a lab. If you’re looking for a game where you can stroll through a firefight or leap across chunks of shattered scenery before they collapse, Quantum Break is the one.

Remedy has tried to incorporate these elements into puzzle and platforming sections, frequently with mixed results. Jack hasn’t been built with the speed or grace of a Lara Croft or Nathan Drake, and only seems to be able to climb selected scenic elements where someone has helpfully draped a blanket over the edge (please note, in real life blankets slip). Many of the puzzles come down to finding the right spot, holding Y and moving fast before time resets, while some of the slower moments of the game – the bits where the exposition is packed in – are combined with oddly workmanlike tasks of the ‘find two switches’ variety. 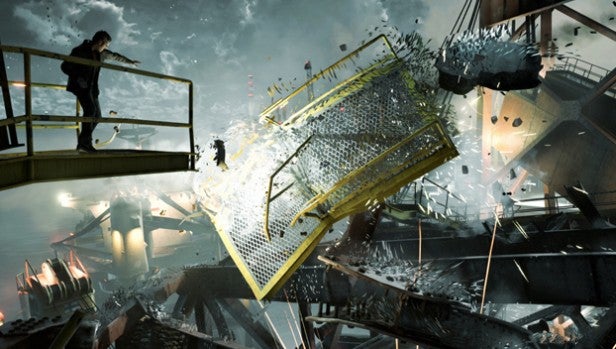 Which brings us neatly to something else about Quantum Break. For a thoroughly decent shooter with unbelievable graphics, it doesn’t half have a weirdly dated feel. There’s something about the level design, with its constrained bubbles of action and its artificial limits on where you can go and what you can do that harks back to the original Gears of War or the first Uncharted, rather than a supposedly cutting-edge game. You’d have to be a confirmed misery-guts to find its time-shifting, super-powered blasting unenjoyable, but after so much hype and so many delays we have a right to expect more.

There are great moments, including some fabulous set-pieces and breathless battles in abandoned warehouses, corporate offices and secret labs. Remedy also knows when to add new enemies, throwing in operatives with their own high-tech, time-twisting powers or heavy armour (complete with regulatory weak spot). However, the good work can get spoilt by a propensity for simply filling the same space with more and more enemies, and by unexpected insta-death moments that see you repeating a while chunk again. And did we really need the worst, most frustrating climactic boss battle since the original Bioshock, complete with a minute of walking just to trigger the damn thing off? 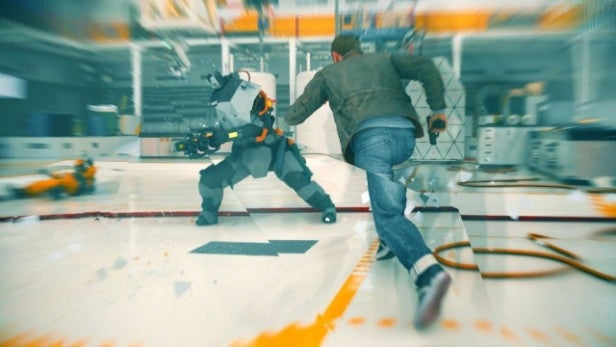 No. Quantum Break is nowhere near as bad as The Order: 1886. It’s fun to play and has a story and characters you’ll actually care about. All the same, it’s no groundbreaking classic. Here the wow factor’s all about the graphics, so it’s lucky that they really are something to behold. It’s not just that the facial capture and animation systems are superb, though we still have some miles in the uncanny valley left to cross, but that the materials and lighting simulations create something that looks like an architectural render – at least before the bullets start flying. Once things kick off Quantum Break resembles nothing so much as the natural next-gen heir to both Max Payne and F.E.A.R. The blur and particle effects are overwhelming. The big set-piece stutters deliver freeze-frame spectacles to die for.

Yet one final disappointment remains: as an experience it’s quite short-lived. I suspect that we’re looking at seven to nine hours for most players with the junction points included, with no multiplayer to fill things out. Now, tacked on multiplayer is nobody’s friend, while Remedy is right in suggesting that there’s strong replay value, particularly at higher difficulty levels. There are a lot of collectibles and story elements to uncover, giving you more details on the plot, plus a character progression system that seems weirdly underplayed; I barely remembered it on my first playthrough. All the same, neither that nor the chance to see how the tale works out with different choices stops you feeling that Quantum Break could have been more. There’s a lot of money up there on the screen, but it’s the graphics, not the gameplay, that will make any lasting impression.

Quantum Break’s no travesty of Order: 1886 proportions, but its gameplay, while fun, can’t reach the level of its stellar graphics. Enjoy it for its engaging time-control gunplay, its spectacular stutters and its sci-fi storyline, but this isn’t the landmark entertainment experience that Microsoft once promised.