A sequel – whether it’s a movie, book or game – has two duties. On the one hand, it has to be faithful to the original; to have something of the old feel, a few old characters, and a few common threads to pull the two stories together. But at the same time, it has to take the series somewhere new – pull the characters and their story into new territories and new situations; embrace new ideas and bigger themes. The thing about iD and Raven’s Quake 4 is that it absolutely aces the first part. It couldn’t be any more like Quake II if it had been designed by the exact same people immediately afterwards. But then it goes and fumbles the second part. If Quake 4 didn’t look so damn cutting-edge, we’d have to label it a retro game and be done with it. 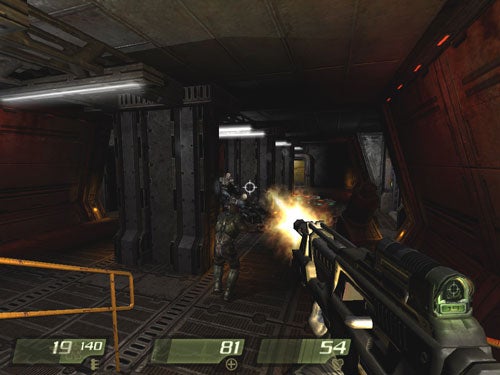 This is Quake II – a gung-ho science fiction war movie of a game – taken to the max. It follows on almost directly where iD’s classic left off, features a very similar weapon set and enemies that are clearly from the same gene pool, and has action modelled very clearly on the Quake II model. It’s really, really intense stuff, with enemies coming from all sides and even bursting through the scenery to get at you, and if it lets up for a few minutes here and there, it’s only to give you enough time for the next big shock. Raven has had the sense to steal some new elements from the likes of Halo and Call of Duty, but Quake 4 has neither the emergent, open gameplay of the former or the tough, squad-based dynamic of the latter. For large chunks of the game you could simply be playing Quake II remixed with the Doom 3 engine. 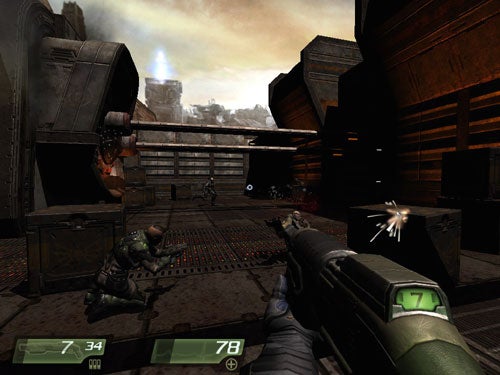 In many respects, this is the game’s biggest selling point. Let’s make no bones about it, this engine produces the most stunning indoor environments and lighting effects around, and lends itself to the most detailed horrific and macabre creatures you could hope for. The Strogg were always a deeply unpleasant bunch, and they’ve only become more so with their new makeover: all the torn flesh, grotesque techno implanting and ghastly rending and tearing implements looks even less wholesome this time around. Admittedly, their taste in interior design has not improved much (brown industrial is still THE look on Planet Strogg) but when the level designers really put their imaginations to work there’s some beautiful alien weirdness on display here. You might have seen the central elements – the fans, the glowing tubes, the weird machinery – in Doom 3, but it doesn’t mean they don’t look fabulous here. 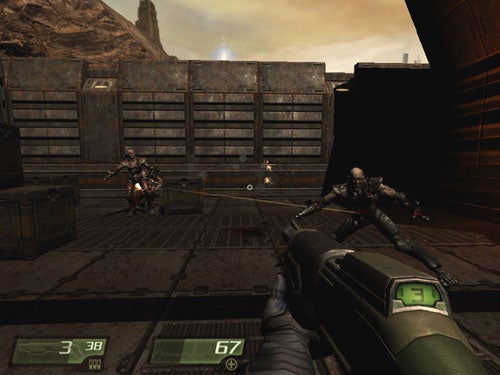 And unlike Doom 3, the pacing is superb. Quake 4 specialises in throwing wave after wave after wave of baddies flying at you, and in the large portions of time when you’re too busy shooting to think, it really does a great job of convincing you that you’ve enlisted in a space-age D-Day. The enemies are varied and unrelenting, and your own comrades give the action a strong sense of personality. With their differing accents and hardnut looks, they seem just like characters in a clichéd war movie of your choice. Really, that’s just as it should be.


What’s more, the game really does try hard to give you variety in your missions. Whereas Halo’s Master Chief is The Man as far as your fellow marines and The Covenant go, in Quake 4 you’re just a grunt; a beefed-up gopher on orders to get this door open, escort that guy to his objective, or take a hovertank to the regroup point and meet up with your unit. In other words, this is a game that’s desperate not to be just kill, kill, kill. 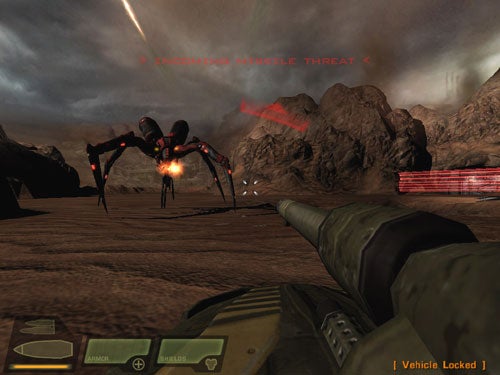 But all this pseudo-sophistication is really just a smokescreen covering the antique game mechanics underneath. Firstly, all that following orders can’t disguise how shockingly linear the level design is. Behind the scenes, all Quake 4 is doing is steering you efficiently from one firefight to the next, with no real opportunity for individual tactics or out of the box thinking. There might be an occasional secret arms cache, but most of the time you might as well be on rails.


Secondly, while your team mates do a great job of looking smart, it’s all an illusion. OK, at their best they can save your bacon or take down larger Strogg with unbelievable ease, but for the most part, all the clever scouting routines and flashlight waving in the world can’t hide the fact that these guys still get in your way, and couldn’t hit a cow’s backside with a bass guitar, let alone a banjo. 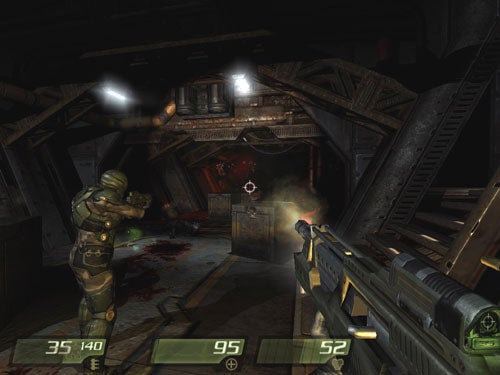 Not that the Strogg would have much chance of beating them in space University Challenge. On harder difficulty levels – and I really would recommend playing this on a harder difficulty level – they are mean shots, but tactically speaking they’re useless. In effect, Strogg strategy hasn’t come on much since last time, with our flesh-moulding fiends stuck with three settings: duck and cover, stand and shoot, or charge oblivious. F.E.A.R.’s smart AI makes it all seem a little bit silly (check out the full F.E.A.R review next week), and Half-Life 2 did a whole lot better last year. 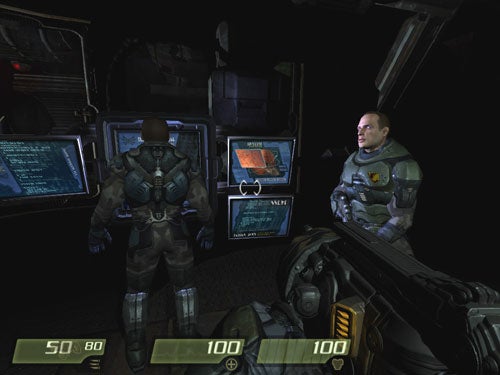 So you’re actually left wishing things had moved on a bit further since Quake II. Didn’t we have a right to expect something more imaginative? I know vehicle combat is a new thing for the series, but even here it all seems very hemmed in and over-controlled. In Halo 2 you felt that taking a vehicle was a valid tactical option. Here it’s your only option, and once you reach the end of the vehicle combat sequence it’s taken away from you. 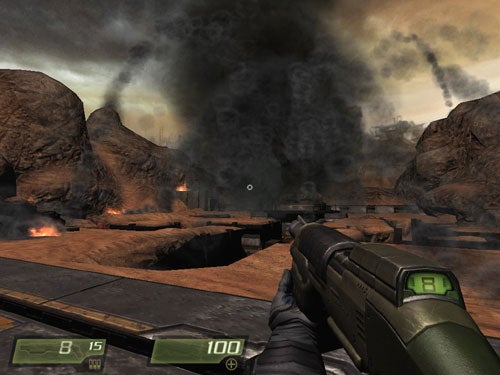 Multiplayer Quake 4 suffers from similar issues. Don’t get me wrong: it’s going to delight the Quake deathmatch hardcore. It’s a big, bloody, fragfest of a game. The weapons are stupidly powerful, yet oddly well balanced, and while there is a fairly meagre assortment of maps, they certainly do their best to encourage all-out carnage. At the same time, there’s little room for subtlety, tactics or anything much beyond sheer reflexes. With little more than the basic Deathmatch, Team Deathmatch and Capture the Flag modes, this isn’t the most versatile of multiplayer games, and you’re left wondering why iD and Raven haven’t done anything to take the genre forward. After Counter-Strike, Battlefield 2 and the last Unreal Tournament, Quake 4 feels like a big step backwards. 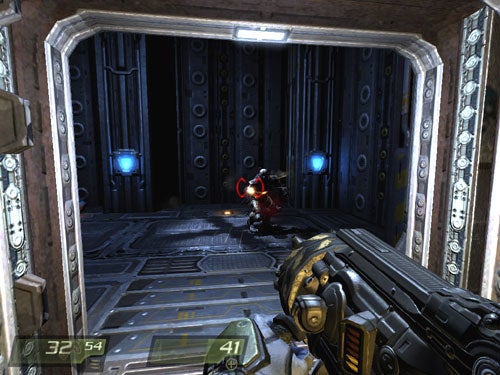 Luckily, the game’s saving grace is that it’s always such an enjoyable step backwards. On its own level of dumb, heady spectacle, Quake 4 constantly delivers. In single-player and multiplayer, it’s a great, bombastic audio-visual experience, and one of the most compelling games around. But when it’s all said and done – when you’ve had your ten to twelve hours of single-player fun and brushed up on those rusty deathmatch skills – you still can’t help wishing for some more signs of real imagination. After the controversy over Doom III, Quake 4 feels more like a rallying point for the faithful than a confident stride into new territory. Come on iD, isn’t it time you headed out to some brave new worlds?


Quake II meets Halo and Call of Duty in the Doom 3 engine, but not quite as brilliant as that sounds. The action is intense and the visuals are gorgeous, next-generation stuff, but the gameplay hasn’t yet caught up with Halo. 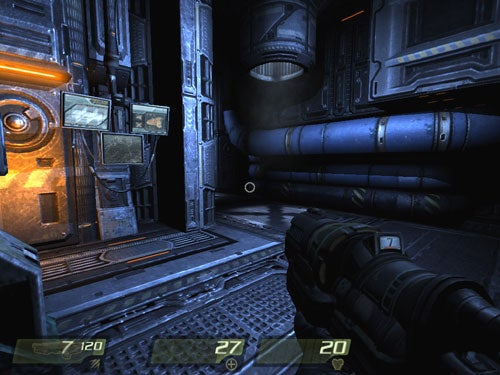