The Qtek 8500 is the first Windows Mobile 5.0 Smartphone to be available in a flip format. There have been one or two other attempts at flip phones with earlier incarnations of the Windows Mobile platform but the format is very far from being the norm.


You may see this handset referred to as the HTC STRTrk (any resemblance to a cult sci-fi TV and movie series is probably not entirely coincidental). To clear up any confusion on that, until the day this review was posted, manufacturer HTC used the Qtek brand to sell its handsets. This has now changed, and Qtek is no more.


The handset has clearly been designed with at least half an eye on luring fans of Motorola’s RAZR V3. The first, most immediate sign of this is the capitalised vowel free name HTC has given it. The second is that Qtek 8500 is available with a significant portion of the front and back fascia in a shade of pink close to that which adorns a version of the RAZR V3.


Those of a nervous disposition can opt for pure black, but will still get a handset that sports a flat number pad and a deliberately thin design. I’ll come to the number pad later. For the record the dimensions – 98 x 51 x 16mm and 99g match up to the RAZR V3’s 98 x 53 x 14mm and 95g pretty well.

However the design doesn’t quite match up to the stylishness of the RAZR. The RAZR in all the variations I’ve seen, feels like something substantial, solid and desirable in the hand, while the Qtek 8500 lacks panache.


The comparison is only really valid if you have both handsets side by side, but even on its own the Qtek 8500 doesn’t feel the solid, polished mobile you might expect a Windows Mobile Smartphone to be.


Like any flip phone worth its salt the Qtek 8500 has an outer display. Its enormous porthole surround makes you think at first that the display is going to be large, and indeed it is a reasonable size at 1.2in diagonal and 128 x 128 pixels. You can configure a number of settings, for example toggling the date and time and SIM status information, choosing between a number of clock formats, and opting for a wallpaper background.


When a call comes in the caller number is displayed, and if the caller is in the Contacts database their name – and photo if you’ve saved one – are also shown. You lift the flip to answer the call.

There are three buttons beneath the front display, picked out in silver. These are music control keys. You can skip about between tracks, pause and restart. I found I could even start playback using these buttons after periods when the handset was powered down. But switching between internal memory and storage card needs Windows Media Player, which you can only access through the main screen.


The buttons around the handset edges aren’t marked with their functions, so you’ll have to remember what they are for. This is not too onerous as there are only three of them. On the left edge is a volume rocker. A long press on one end of this launches the Windows Mobile Voice Tag software while a long press on the other end launches the Windows Mobile voice recorder.


Oddly, the manual attributes these functions to long and short presses of the only other key on this edge, which in fact launches the Windows Mobile Comm Manager, a central control area where you can turn GSM communications on and off, toggle Bluetooth, tweak how your Outlook email works, disconnect GPRS (you can’t connect GPRS from here), switch between ringer and vibrate modes and run ActiveSync. Any options not currently available are greyed out. 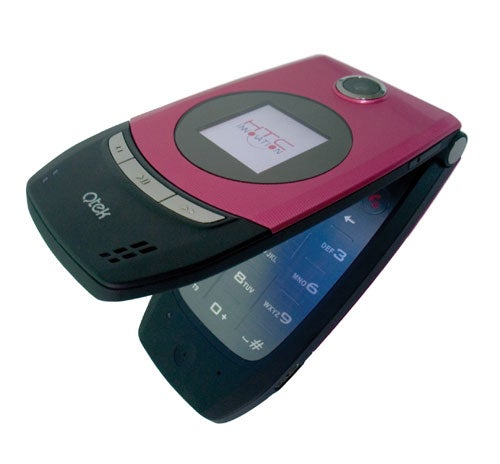 On the right side is a single button, dedicated to the built in camera. Its lens sits on the front of the casing. With the flip closed you can use the front screen to frame pictures of yourself, with it opened you can shoot outwards as you would with an ordinary camera.


The camera shoots at resolutions up to 1.3-megapixels (160 x 120, 320 x 240, 640 x 480 and 1,280 x 1,024), and has a maximum 8x digital zoom depending on the resolution you are shooting at. There are greyscale, sepia and cool effects as well as white balance presets for daylight, night, incandescent and fluorescent conditions and an auto and user tweakable option. Image quality is reasonable, but the software seemed to forget instructions I gave it between instances of turning the handset on and off, so that I had to remind it to save images to a memory card, for example.


With the flip open the Qtek 8500 is a much larger handset. The 2.2in, 240 x 320 pixel main screen looks a little lost in its surroundings. The number pad benefits from the amount of space available to it, stretching almost the full width and height to be had.

As already noted, the numberpad area is flat. This does imbue a certain design chic, but I tend to find that flat number pads aren’t as good for fast data entry as raised keys. In particular this is the case with the Qtek 8500 where SMS creation is concerned.


With 64MB each of ROM and RAM the Qtek 8500 doesn’t have a great deal of room for you to add your own software into the Windows Mobile 5.0 mix. After a hard reset the on-board system info told me I had 13MB of storage memory and 28MB of program memory free.


You can augment the available storage using microSD cards (they are also known as TransFlash). Cards are available in capacities up to 1GB. You’d be advised to buy the biggest capacity card you can afford as changing them is fiddly and you need to remove your SIM card to get to the slot.


Augmenting the Windows Mobile 5.0 Smartphone software is the full suite of ClearVue viewers. This provides you with viewing (not editing) facilities for Microsoft Word and .rtf format documents, Excel spreadsheets, PowerPoint presentations, and PDF documents. 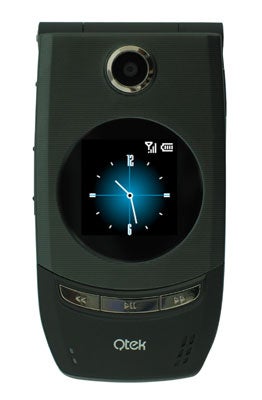 It is a pity that the connector which is shared by the headset and PC synch cable is a proprietary type. In these days of mini USB everywhere, having to carry a separate USB synch or power cable for this device may annoy frequent travellers. The quality of sound output from the provided stereo headset is pretty good, but again it is annoying that you can’t swap the in-ear buds for your own headphones.


Any handset that purports to play music needs to offer good battery life. My standard Windows Mobile Smartphone test forces the screen to stay on and sets the volume as high as possible, leaving GSM turned on and any wireless (Bluetooth or Wi-Fi) turned off. In this case the external display time out was set to 30 seconds, the maximum available. I then looped MP3 music through the device speaker.


I got just over four hours of music, which is pretty poor for a music playing handset. It might not be enough to see me through a day out of the office on business. More worrying, the low battery warning came just six minutes before power failed, so I’d need to be very careful about monitoring battery levels while listening to music to ensure the handset retained enough juice to make an important call late in the day.


It is nice to see Windows Mobile 5.0 Smartphone break away from the candy bar format, and there is nothing amiss with the software itself which stacks up to its appearances in other hardware well. Indeed the inclusion of the ClearVue suite could be quite an advantage for some. The wheeze of offering a pink variant should increase the Qtek 8500’s appeal, too.


But there are plenty of alternatives to choose from in the Windows Mobile 5.0 Smartphone camp, and unless you are a flip phone fan not a great deal to recommend this variant over one of the others.