The Qpad MK-90 is the company’s flagship mechanical-switch gaming keyboard. It offers multi-colour backlit keys, full programmability – and its keys are designed to last an astounding 60 million strokes.

Costing around £110, it’s about £40 cheaper than models such as the Corsair K70 RGB. However, it offers a largely similar feature set, perhaps making it an ideal alternative.

Edit: It has come to my attention that the MK-90 has serious issues with Windows 8 and 10 and possibly some motherboards too. Prompted by a reader I installed this keyboard in my Windows 10 test bench and the bios refused to recognise the keyboard. Once booted to Windows the keyboard works normally but the software completely fails to load, crashing when opened. The keyboard works fine in Windows 7.

For this reason the score on this review has been reduced to 6/10, until these issues are resolved.

The MK-90 isn’t the most striking of gaming keyboards. Its plain-looking, matte-black body has little in the way of extras – and those few design tweaks it does have fall flat.

The Lock key indicators have a slightly odd square design and are surrounded by a number of dimples, while the base has a dip in the middle when viewed in profile. Overall it’s a design that elicits a shrug, rather than anything more enthusiastic or damning.

Build quality is good, however. Although there’s slight flex if you pick up and twist the keyboard, on the whole its steel core helps the Qpad MK-90 to stand firm. I’m also a fan of the off-centre cable – all the better for routing it round your monitor stand. 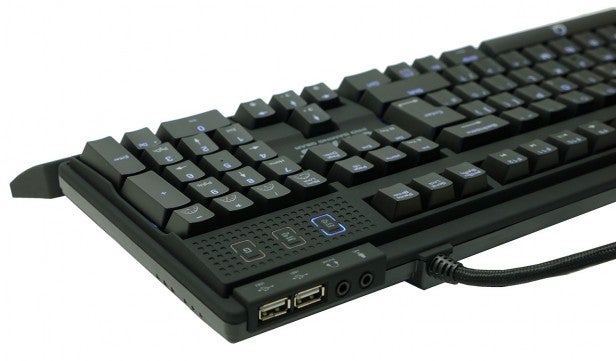 What’s more, next to the cable is a two-port USB hub, alongside microphone and headphone connections. It’s rare to find a proper USB hub, as opposed to a single USB pass-through, and it’s rarer still to get audio connections these days – so both are very welcome additions.

The audio sockets are just pass-throughs, but I prefer these over the poor-quality USB headphone amp built into the keyboard.

Turn the keyboard over and there are the usual flip-up feet for raising the rear edge by a centimetre or so. They’re a little stiff and make a grinding noise when being deployed – but otherwise they do the job.

Another nod to typing comfort comes in the form of the included wrist rest. It’s a solid plastic unit, offering no cushioning, but it’s fairly deep so will add some support. I just removed it and used a squidgy, cushioned wrist rest instead. 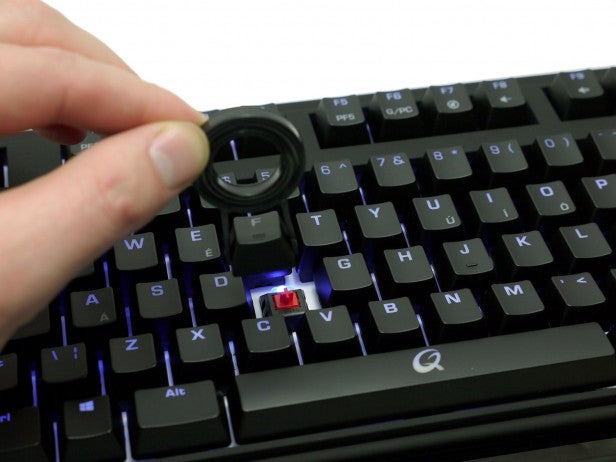 The headline feature of this keyboard is its RGB backlighting, which, via the Qpad software, you can change to a colour of your choice.

It’s possible to assign a different colour to each key, choose from a number of preset lighting animations or even have the lighting follow the beat of your music. However, customisation options don’t extend to the number available on the Corsair K70 RGB, which enables complete individual-key animation.

Nonetheless, the quality is pleasing and the pale-coloured base below the keys means the lighting is spread out evenly. The lettering on the keys is also clear and easy to read, unlike that on some rivals such as the Logitech G710+.

Talking of lettering, it’s via secondary functions marked on the keys that the MK-90 offers most of its extras features. By holding down the Fn key – which replaces the right-hand Windows key – F1-F12 can be used to switch profiles, control media playback and adjust volume.

The cursor keys also have secondary roles for adjusting the brightness of the backlighting and switching between the lighting animations. You can even switch between n-key rollover and 6-key rollover via the Ins/Del keys, plus the keys are fully programmable using the software.

All told, it adds up to a pretty comprehensive set of features, even if not all of them are quite so easy to access as they would be with dedicated keys. 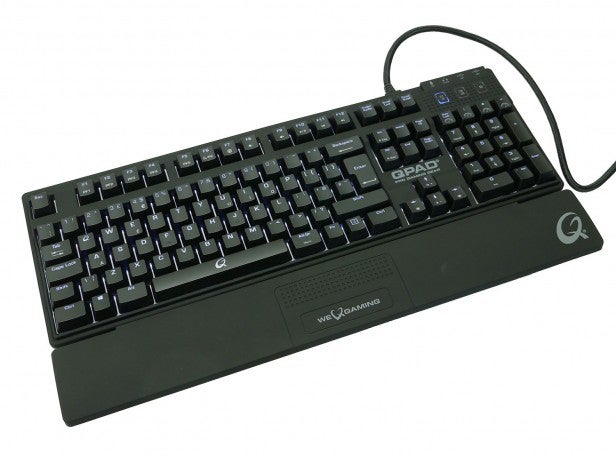 The software itself is a mixed bag. It’s well designed, with a tidy and largely intuitive layout. However, programming the lighting is a little clunky, and there are some annoying quirks. For example, if you have a sub-menu open, you can’t move the window or close it – that’s typical behaviour for a pop-up window, but not for a dropdown menu.

As well as being reassigned to different functions, keys can also be used to launch macros or programs. Up to five profiles are on offer to program all the different functions you need, and you can even set it up so that the software automatically switches profile when a program is opened.