What is the QPad 8K Pro Gaming Laser Mouse?

No prizes for guessing the QPad 8K Pro Gaming Laser Mouse is a gaming mouse aimed at the upper echelons of the gaming fraternity, but what’s the 8K all about? That refers to the mouse’s 8200cpi sensitivity, an impressive figure that’s backed up by further goodies in this surprisingly affordable yet capable computing rodent.

You also get a 32-bit ARM processor, customisable RGB lighting and 128kb of on-board memory for storing all your settings. Its right handed-only grip will limit its appeal for some, as will its dull design, but otherwise this is a good choice for the price.

Just like with the Qpad MK-90 there’s something about the design of the QPad 8K that doesn’t quite work aesthetically. It’s not downright ugly but it doesn’t have quite the flair of something like the Razer Mamba or Corsair M65.

Maybe it’s the use of the same soft-touch black plastic for the whole thing or its curvy shape, or maybe it’s just the QPad logo. Whatever it is I don’t get that feeling of wanting one like I do with the above mice. 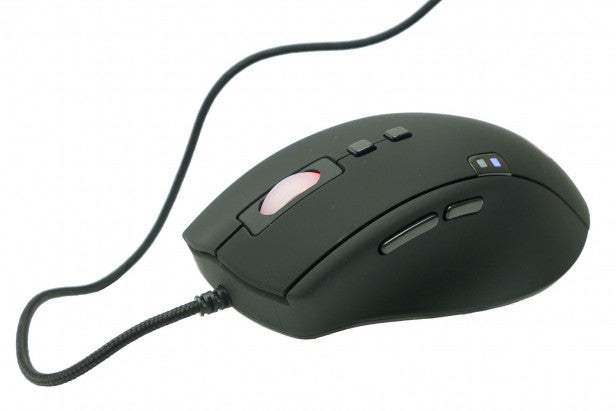 Ergonomically, though, the design works rather well. The soft-touch finish feels great and the contouring sits perfectly for my grip, with the ring and little fingers settling nicely on their ledges and the thumb getting a good grip too.

I’d prefer to see patches of thick rubber under where the fingers rest, such as on the Logitech G402, as this stands up to wear much better than the soft touch finish, which I find tends to wear off after about a year’s use.

Button placement is also nearly perfect for my tastes. The two main buttons are as responsive as you’d expect while the Back and Forward buttons fall perfectly under thumb and the soft, rubber, notched scroll wheel is easy to click. 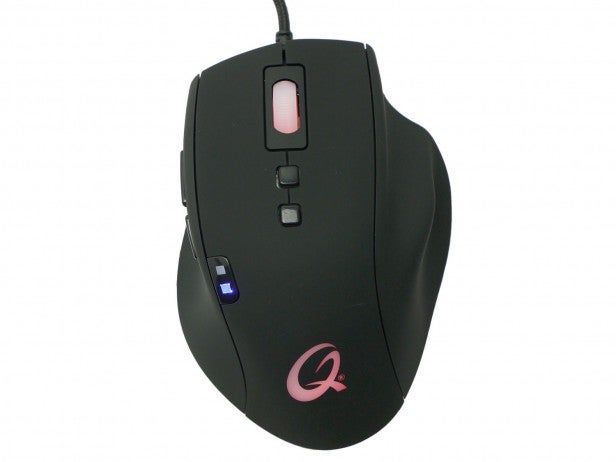 Only the CPI (or DPI if you prefer) adjustment buttons could be better placed. I’ve come to find the placement used on the G402, where they’re just to the left of the index finger, to be ideal as you can actually reach them during the heat of battle. The placement here, under the scroll wheel, is too difficult to reach accurately while gaming, I find. Obviously your mileage may vary, depending on your grip and other preferences.

There are no weights to adjust here, nor replacement panels to adjust the ergonomics, but neither are things I’ve ever put much stock in so they’re not missed. As is, the mouse weighs 112g, which is a touch heavier than even the wireless Logitech G602 but lighter than the Razer Mamba, for instance.

The plentiful two metre long cable is braided (another thing I’ve never been particularly fussed about) and terminates in a gold plated USB 2.0 plug.

In terms of performance, the key feature of this mouse is its 8200cpi sensitivity rating, which means this mouse should be well up to the task for even the twitchiest of gamers. It can be adjusted to anything from 50-8200cpi in 50cpi increments, and you can choose to program up to three quick settings that you can cycle between using the cpi-adjustment buttons.

The mouse can only track up to 150ips (inches/second), though, which is below the 200ips of the Razer Deathadder and some way below the claimed 420ips of the Logitech G402. However, in my tests I’ve never been able to even exceed 100ips in real world usage so it’s perhaps a moot point. 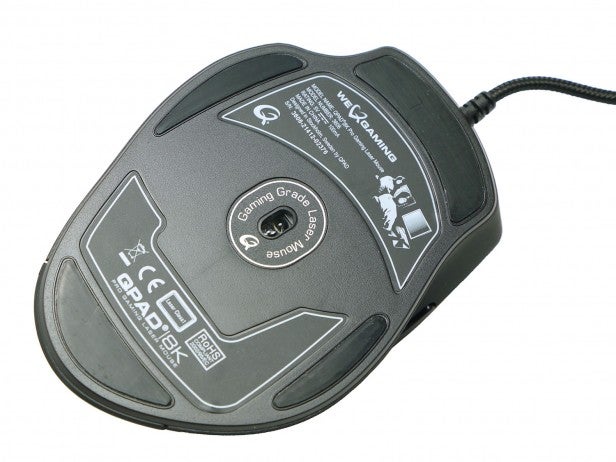 To process the 10.8MP/s the 30×30 pixel sensor churns out there’s a 73MHz, 32-bit ARM processor, which also allows for up to 1ms response time and 1000Hz report rate so that all in all it should be as capable as any other top-end gaming mouse.

The other major feature is the RGB lighting. There are two zones that you can independently adjust to whatever colour you like: the scroll wheel and the Qpad logo. Rather stupidly, though, Qpad has used red and blue lights for the cpi indicator meaning that whatever colour scheme you choose for the other lights it’ll have to be one that fits in with those lights.

Elsewhere you also get on-board memory for storing the mouse’s settings, even when installed in another computer without the optional software. All the button’s are also programmable and the main buttons use Omron switches rated to 20 million activations so they should last a while too.

The QPad 8K Laser comes with one of the more comprehensive mouse drivers I’ve ever seen, with no less than five main sections for adjusting all its settings. You’ve got basic mouse settings, advanced mouse settings, lighting settings, macro recording and button assignment. 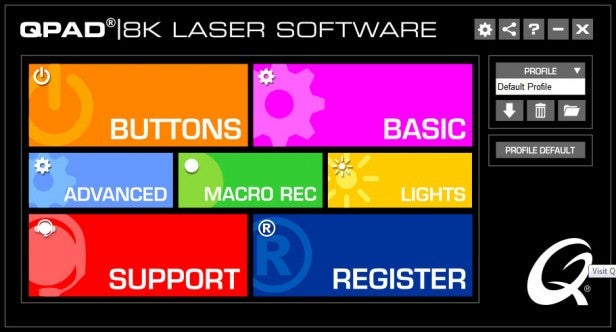 When it comes to lighting, you can manually type in what RGB colour you want for each zone, adjust brightness, adjust the time before the lights dim and select an animation mode – wave (slowly illuminates and dims), pulse (switches on and off) or colour flow (slowly moves between all colours). 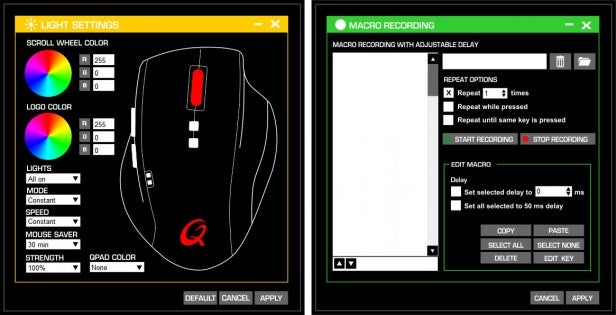 The software itself has a few little idiosyncrasies, such as buttons sometimes not responding very quickly, but largely it’s easy and intuitive to use.

The proof of any mouse is in how it performs both in day to day use and when gaming and, having used it for ten hours a day for a week, the QPad 8K Laser passed with flying colours so far as I’m concerned.

Its relaxed ergonomics make it very comfortable for daily use yet still provide the right grip for more intense gaming sessions while its tracking is never less than excellent. Whether tracing round an object in Photoshop, playing a low-cpi game like Counter-Strike or leaping about in Titanfall I found it entirely up to the task.

The large Teflon glides also make the mouse incredibly smooth-running, despite it being a slightly heavier mouse than some, and it’s perfectly balanced so doesn’t tilt forward or back when raised.

As mentioned above, the cpi switch is not ideally placed for my liking but otherwise every aspect of this mouse performed as well as the very best out there. 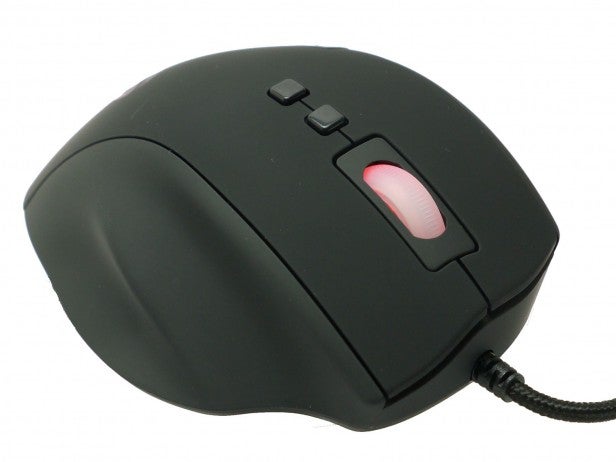 Should I buy the QPad 8K Pro Gaming Laser Mouse?

As has long been the case, in many ways the key criteria for a gaming mouse is actually comfort and making sure you choose a shape that fits your grip style. As such for many people the appeal of the QPad 8K Laser will come down to whether they like its wide, splayed design that’s more generally associated with palm grips. I found it comfortable and easy to use whatever grip style I used but many people simply won’t get on with it.

There’s also the matter of the cpi switching buttons. If you prefer the central placement used here they’re as good, if not better, than most others. However, if like me you prefer them placed off to the left of the index finger then clearly this mouse isn’t for you.

Otherwise this mouse it up there with the best, delivering the sort of performance and feature set you’d expect for its price – I really can’t fault it.

All that is, except for the slightly lacklustre design – in a market dominated by big brands with striking designs, the Qpad doesn’t quite cut it.

The QPad 8K Laser gaming mouse is superb where it matters; it’s comfortable to use and performs brilliantly. However, some may not get on with the ergonomics and the styling can’t rival the bigger brands.