This compact box accepts a single SATA hard disk and its sleek brushed aluminium chassis not only looks good but it is also designed to aid with heat dissipation. It’s endowed with a good specification as it sports a low power embedded 500MHz SoC (System on Chip) processor partnered by 128MB of DDR2 and 8MB of Flash memory. Gigabit Ethernet is on the menu as are a triplet of USB ports that can be used for adding external storage devices or for sharing printers and there’s a high-speed eSATA port to play with as well. 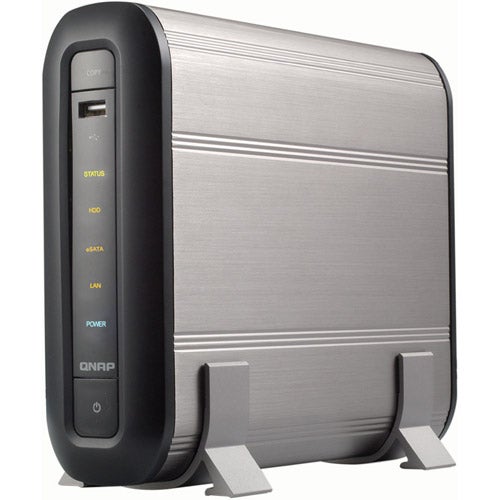 We reviewed the diskless version and dropped in a 150GB Western Digital Raptor 1500ADFD drive. Hard disk installation is simple enough as after unpacking the appliance you pull apart the two halves of the cover to reveal a tray in one side. The hard disk is easily secured using the supplied screws and you then slide the two pieces together and use two more supplied screws to fix them in place.


During testing we found the appliance to be a good silent partner with it occasionally chirping to itself when the disk was being accessed. The casing does get quite toasty during use but this is hardly surprising as it is essentially acting as a heat sink. The bundled Finder software gets you up and running with the minimum of fuss as it automatically locates the appliance on the network and provides a quick start wizard to set up network parameters, initialise the hard disk and download the firmware. For the latter we used the latest v1.1 which adds some extra goodies including secure logins, FTP transfers and remote replication, UPS support and IP address blocking.


For a single drive appliance, the TS-109 has a very good turn of speed although it’s not quite as fast as QNAP claims. We copied a 690MB video file from a Supermicro Pentium D 3.2GHz PC to the appliance and back again over Gigabit Ethernet in 41 seconds and 36 seconds for write and read rates of 16.9MB/sec and 19.1MB/sec respectively. FTP speeds were better as using the FileZilla utility we uploaded and downloaded the same file at rates of 18.2MB/sec and 23.8MB/sec. Expect speed to drop as files sizes increase as FTP operations with a 2.52GB video clip returned 17.8MB.sec and 10.1MB/sec for read and write operations.

If it’s features you’re after then the TS-109 is the one for you as it’s simply crammed with them. Multimedia functions include the TwonkyMedia server which can be configured from the web interface and the appliance runs an iTunes server as well. For the latter you import music to the Qmultimedia folder making it accessible to any user running the iTunes client. The Multimedia Station provides web access to your photographs and thumbnails are created once they have been uploaded. A slideshow runs through them at a preset interval in seconds and you can save them off and print them directly from the interface.


As with Synology’s CS-407e, you have a Download Station for retrieving files using BitTorrent, HTTP and FTP but, unlike Synology, you don’t get a scheduler for unattended operations. You can use the web interface or the bundled QGet utility but both offer precisely the same features. Bizarrely, both tools will only report on file sizes and download averages if you pause an active job and resume it. 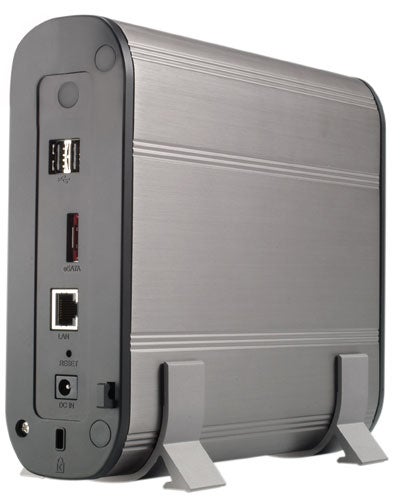 Support for PHP and an integral MySQL server means you can use the appliance as a web server, it supports NT domain and Active Directory authentication and user disk quotas, plus you get some useful backup tools as well. Selected folders can be replicated to another remote TS-109 appliance at scheduled intervals while Windows workstation backup is handled by the bundled NetBak Replicator which also provides a scheduler.


Although the appliance only has room for a single drive you can plug in an external USB or eSATA drive and implement RAID-1 mirroring across them. We connected a 300GB Maxtor external drive and after selecting the Q-RAID 1 setting it was automatically formatted and used as a mirror. If the internal hard disk fails data restoration is a simple process. We reformatted the internal drive and selected the Recover Data function whereupon all the data on the USB drive was restored back to the appliance and the mirror reinstated. A great idea but there is a price to pay as performance takes a hit with our video clip copy tests now delivering a reduced 16.9MB/sec and 13.2MB/sec read and write speeds.


When we reviewed the Synology CS-407e we thought it wasn’t possible to get any more features at this price point but QNAP has proved us wrong. Overall performance is particularly good and although the Download Station feature is of limited value there’s little this box can’t do – the backup features are also a cut above the rest

QNAP provides a smart quick start wizard to get you off the starting blocks.

One interface is provided for accessing various multimedia services and another for administration.

The Multimedia Station lets you publish pictures on the Internet for all to admire.

A USB drive can be used to mirror the internal drive and restore data in the event of a failure.

utilities include the bundled NetBak Replicator for Windows workstation backup.