As computers have become faster over the years, they have also become louder mainly due to increased cooling needs. The larger and larger cooling fans needed to keep today’s high-performance PCs functioning properly have lead to an increase in ambient noise that many users find annoying.


In the last year or so, PC noise has become a big issue and there has been a multitude of new products arriving to combat this problem, from low noise fans to passive coolers and fan controllers.


This is where the Pyrmaid V+ comes in. This little beauty is an automatic fan controller that you fit inside your system. The clever thing about the Pyramid V+ is the fact that it will adjust the speed of up to three fans based on the ambient temperature of the case rather than needing manual adjustment from the user. As you might expect by the name the Pyramid V+ is pyramid shaped and measures 38 x 38mm at the base and is 28mm high.


As the Pyramid V+ is constructed from see-through plastic, you can make out some of the components inside. The two main parts are a small tweeter style speaker and a thermal sensor. All other components are mounted at the bottom of the Pyramid V+ and are hard to make out since the bottom is covered by double sided sticky tape for mounting purposes. One of the components located at the base of the Pyramid V+ does however become aparent as soon as you switch your PC on. This bright LED was blue in our review sample, but other colours are available to suit individual taste.


It is reasonably important to read the instructions before you try to install the Pyramid V+ as it has to be installed close to the CPU and PSU to be truly effective. Since the unit uses its integrated thermal sensor to determine the speed of your fans, it needs to be where the most heat is.


Worth noting is that the manual states that the Pyramid V+ shouldn’t be connected to the CPU fan. This is because many CPU fans are rated at a specific speed to cool efficiently, therefore if you connect the Pyramid V+ to the CPU fan it might slow it down too much or even stop it spinning which in turn could cause damage to your CPU. 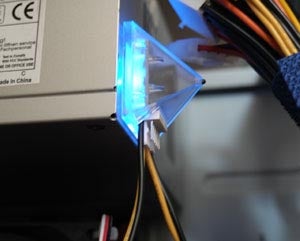 So does it work? Well, yes it works very well and it does exactly what it says it will do. Using a couple of 80mm fans and one 120mm fan the Pyramid V+ slowed them down to a speed that was almost noiseless when the computer was under light load and as the temperature increased the speeds of the fans increased. The manufacturer states that you can daisy chain up to eight four-pin Molex fans to the Pyramid V+ although you’d have to have a pretty big case to keep them all in.


There are several built in failsafe features, such as the integrated tweeter that will activate if the system temperature rises too high. Also, if the Pyramid V+ should fail all the attached fans will default to full speed.


Subjecting the Pyramid V+ to excessive heat did cause the audible alert to sound while the attached fans started spinning at maximum RPM.


The Pyramid V+ is a great product but there are a couple of downsides. For one there is no manual fan control, but to be fair, automatic operation is what this thing is all about. A more important issue is the price. At £25.85 plus delivery the Pyramid V+ is a little on the steep side. At a price of £15 the Pyramid V+ would have walked away with an award, but sadly the price is a little too high even for such an innovative piece of hardware.


I’m affraid that I missed that the prices over at QuietPC are ex VAT, so the price with VAT is even more than previously stated. This doesn’t change any aspect of the review, but it is something I hope QuietPC will try to improve on.