So, you’ve got yourself a PS4 or a brand spanking new Nintendo Switch. Do you really want to splash out on an old-fashioned arcade puzzle game, even with if mashes up two of the best-loved puzzlers out there? After all, it’s not as if it’s a genre that needs the latest graphics or to be played on the big screen. The smartphone you carry in your pocket is probably crawling with the things – perfectly good puzzlers, many of them free.

If that’s what you think – and I don’t entirely blame you – Puyo Puyo Tetris is on a mission to change your mind.

How? By going bigger and further than any puzzle game before. For a start, it takes two of the oldest puzzle games out there and smashes them together, creating a selection of weird hybrid modes. Tetris you’re probably familiar with, while Puyo Puyo is a variant of the classic match-three puzzler, where couples of coloured sentient blobs rain from the top of the board and can be rotated before they hit each other and form stacks.

When four or more blobs join together they disappear with a pop, allowing the blobs above to cascade down and (hopefully) meet more of the same coloured blobs below, resulting in a chain. The longer you keep playing before the board fills up, and the more chains you create doing so, the higher your final score. Easy. 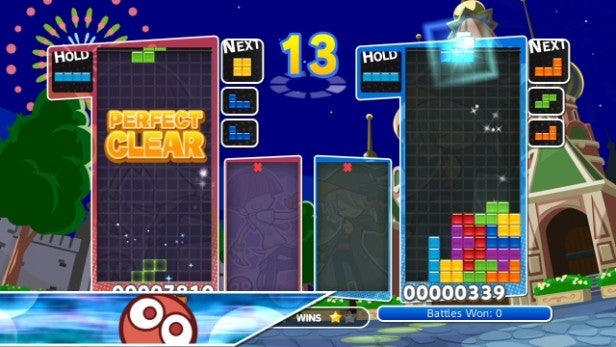 You can, if you like, just play either of the two games, Puyo Puyo as a single-player versus game against the CPU or Tetris, the classic, single-player shape dropping game we all know and love. There’s also a quick-play Fusion mode that mixes up the two, with Puyo blobs and shapes dropping on the same board. To make the most of it, though, you need to dig a little deeper into the main menu and find the host of riches waiting for you.

Go to the Solo Arcade mode, for example. Here you can play Tetris against up to four CPU opponents, Puyo Puyo against the same, or one of the games against opponents playing either of the games. Here chains of Puyos from one player create rains of skull-shaped grey blobs in the boards of other Puyo Puyo players or extra lines rising up from the bottom for their Tetris-playing rivals. In Swap, you play the two games at once, the board switching from Tetris or Puyo Puyo periodically, pushing you to switch with it.

Party is like Versus, with power-ups, activated when adjacent blocks or Puyos disappear, causing you and your opponents grief. If it’s hard enough to position your blobs or shapes at speed, try doing it when you can only see where a spotlight’s pointing, when the drop speed increases, you can’t rotate or your board’s turned upside down.

Big Bang has you working to recognise and then trigger board-clearing chains through a series of phases. The more you fail, the more damage your energy bar takes at the end of the phase until you’re wiped out. Finally, Challenge mode is just a series of bizarre or demanding challenge levels, pushing your Tetris and/or Puyo Puyo skills to their limits. 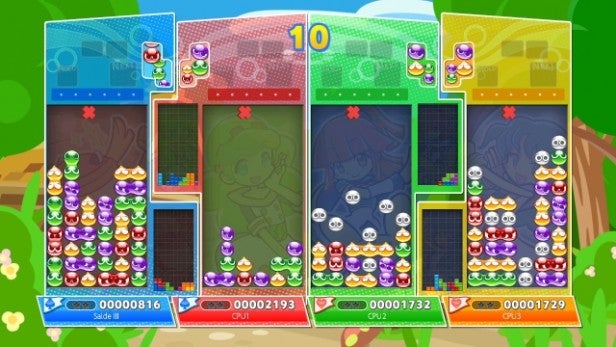 All these modes can also be tackled in the Multiplayer arcade mode, playable with up to four local players on the same screen. And if you haven’t got anyone to play with? Take the action online with two, three and four-player duels, either in ranked matches or easy-going freeplay bouts.

However you play it, Puyo Puyo Tetris just works. It’s an exciting and stupidly addictive solo game, perfect for five- or ten-minute sessions on your Switch (though you’ll find that five or ten minutes tends to double when the ‘one more go’ factor kicks in). You might think that the two-game mash-up and modes might spoil the action, but in fact they add a sense of anarchy, mixing up what might be predictable and turning matches on their head.

And while the graphics aren’t anything to write home about, it’s all done with a certain pizazz. Your characters yelp out threats and celebrations as they dish out another chain of pain to the other player, or moan when the hurt comes the other way. Bright, boisterous comic-book visuals are everywhere you look.

It’s a fantastic multiplayer game when you’re sitting on your sofa, particularly as it’s so accessible and, while experience counts, there’s no knowing who’ll turn out to be a natural champ or a secret Tetris master. I found that playing on the Joy-Con’s analogue stick rather than the D-pad can result in accidentally steering shapes or Puyos when you’re trying to drop them, but it’s something you get used to with a little time. Again, it’s worryingly compulsive; the lure of a rematch is sometimes just too strong. 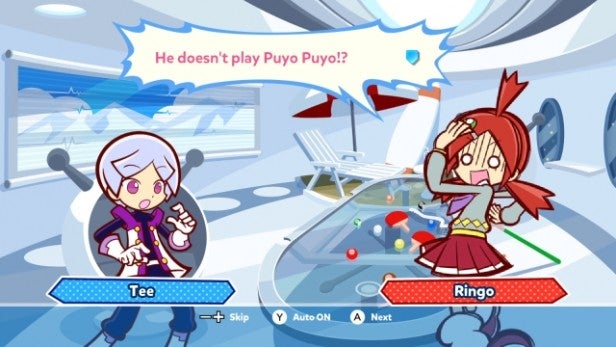 Things are a little slow online at the moment, with most of the Switch player base in Japan, but it’s still easy to find a match, take a pasting and run off to weep in the corner while you lick your wounds. Once that happens once or twice, you’ll realise that there’s a little more to Puyo Puyo Tetris than simply being okay at clearing lines or Puyo clusters. Watch some of the exhibition games available to stream from within the online mode, and you’ll either be slack-jawed with amazement or sitting, head-in-hands, wondering how you’ll cope. You’re going to need some serious skill and strategy to have an impact here.

This is where the game’s masterstroke – Adventure mode – kicks in. On the surface it’s another dim-witted story mode bolted onto a good arcade game, where a bunch of cheerful-looking cartoon kids, aliens, monsters, dog scientists and robots face off against one another according to the machinations of an incomprehensible plot. The voices are really annoying to boot.

Keep playing, though, and you’ll understand how cleverly Adventure mode steers you through a learning process, first getting to grips with the basics of Puyo Puyo and Tetris then running you through the more advanced mechanics, then intermediate and expert strategies. Eventually, you’ll go from storming every match to really struggling – until you finally get your head around the strategy being showcased and incorporate it in your playing style. Ignore the cut-scenes and Adventure mode is actually fun, challenging and addictive in its own right, but it’s also making you a better Puyo Puyo Tetris player.

So, do you really want to splash out on an old-fashioned arcade puzzle game? Surprisingly, the answer might be yes. It’s not much to look at but it’s brilliant fun to play, particularly as a handheld solo game and TV-based party game on the Nintendo Switch. It has great single-player and multiplayer modes not to mention slick ranked and unranked online play, while the Adventure mode does a great job of keeping you entertained while stretching your skills. In fact, there’s just one problem. At £20 on PS4 it’s brilliant value, but at a stonking £35 on the Switch? I’d argue that it’s still worth the money, but if it was selling for around the £20 mark there’s be another half star on the score.