There’s a concern that Kinect might bring to the Xbox 360 the kind of film-adaptation horrors we’ve seen on the Wii. We’re talking compendiums of wretched mini-games, nasty action sequences with poorly implemented motion controls, and titles that last only slightly longer than the running time of the film. This year’s Kung Fu Panda was a case in point, and Puss in Boots has many of the danger signs.

Based on the new Shrek spin-off, it’s effectively a string of motion-controlled action sequences that follows the plot of the new film, tied into some mini-game challenges. You could be forgiven for expecting the worst. 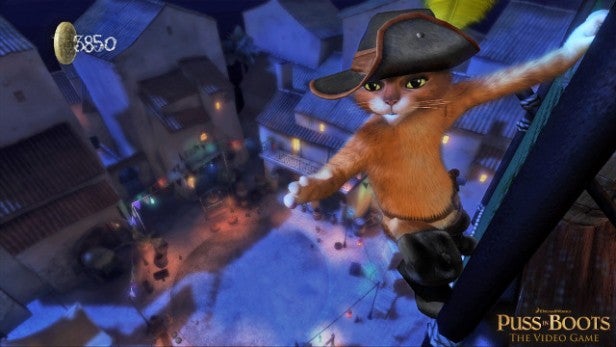 Well, it’s actually better than you might think. Puss in Boot’s biggest issue is its combat. There are a lot of swordfights all through the game, but there’s no real finesse, just some very basic slashing, thrusting and blocking moves that struggle with the normal lag and accuracy problems of so many Kinect games, and some useful kick and cat-scratch special moves that you’ll come to rely on as the game goes on. Fights go on for too long, and while there’s some entertainment to be had in booting Puss’s foes towards various objects that might trap them or knock them unconscious, the fun depletes with repetition. 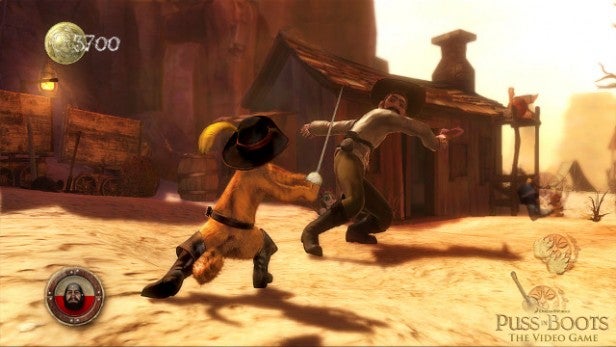 When Puss isn’t fighting, however, the game takes off. Other sections involve stretches of simplified platforming, tightrope-walking and stealth, with some nice bits where you have to adopt a specific pose and even a spot of Latin-flavoured dancing. It’s not the kind of game that requires much skill, but it’s fun to play and arguably just as much fun to watch someone else playing.

Puss in Boots has had some thought put into it, and portions where you have to creep forward then stand still to avoid detection prove that someone has been looking at neat ways to use Kinect. We’ve seen plenty of Kinect games that ask you to do increasingly silly actions in order to get a cheap laugh, but we can’t think of another Kinect game that has you doing so many, so varied and so very silly. It also has a genuinely funny script, helped by voicework from the original cast. 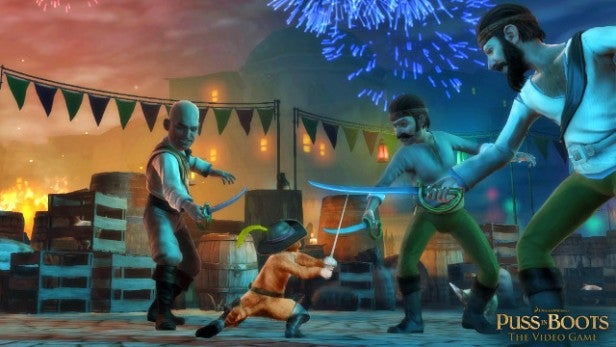 It’s still not all good news. The graphics are a bit unimpressive; instead of scaling down from the movie, the game seems to have been built for the Wii version and then polished up. The multiplayer challenges are only briefly entertaining, and the whole thing can be sailed through within a weekend, though there’s enough replay value to keep younger gamers coming back for more. For these reasons, we can’t recommend Puss – for all its charms – as a real Kinect must-buy,

Verdict
Puss in Boots is an entertaining Kinect romp, with enough running, sneaking, posing, jumping and swashbuckling to keep the family busy for a few wet afternoons. It’s too short and the combat grows dull after a while, but there’s always another silly activity around the next corner, and Puss and his friends lend the game a surprising amount of charm.