A super-affordable gaming headset that won't blow out your eardrums. But the volume restrictions will prove frustrating for most, tempting you to spend a little more for an alternative.

What is the PuroGamer Volume Limited Gaming headset?

When I was a child, I deliberately stapled the tip of my thumb just to see what would happen. It hurt. This was obviously a stupid thing to do, but that’s the point – kids often make poor decisions, and you can’t always be around to keep an eye out for stationery equipment shenanigans.

While not specifically aimed at children, the PuroGamer Volume Limited Gaming Headphones are designed to help ensure that among the copious number of bad decisions made by youngsters and adults alike, ear-damaging volume levels aren’t one of them.

Promising to limit volume to 85dB, while maintaining crisp, pure sound quality, the over-ear cans will also play nice with all devices, from tablets and smartphones, to PCs and consoles. It’s a niche device in a crowded market – but does it deliver? Let’s find out. 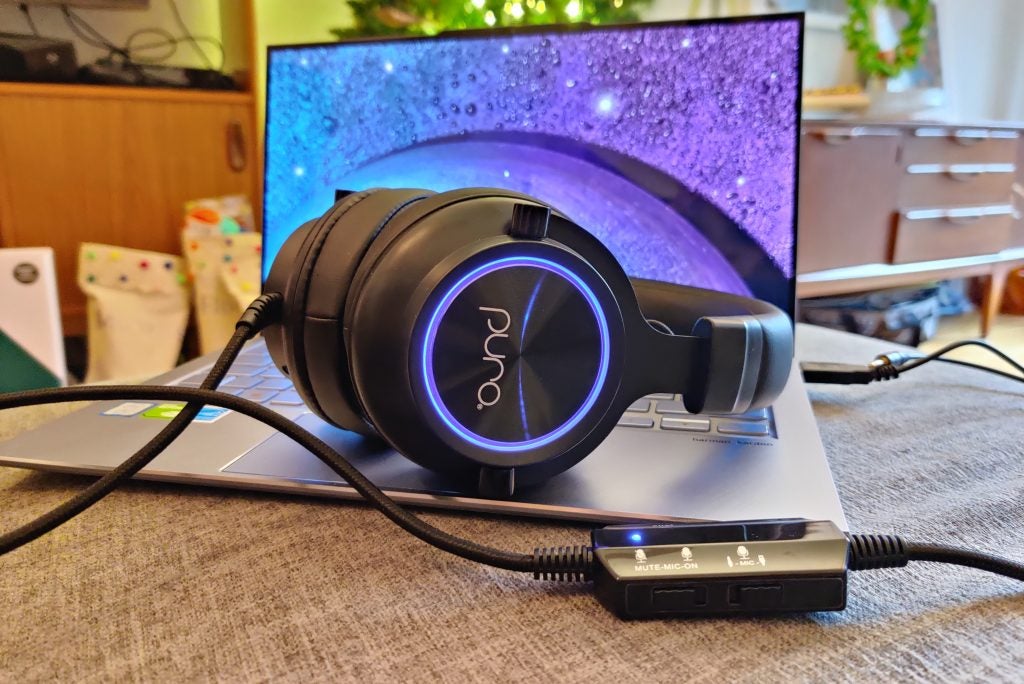 The PuroGamer sports a design of two halves. On the one hand, it’s delightfully minimal – an all-black affair, with a few shiny chrome highlights and smart blue lighting when plugged in.

Its circular brushed plastic, metal connectors and vegan leather headband and earcups all lend it a rather sophisticated look that gamers of any age will be happy to wear.  The set is comfortable, too, thanks to its lightweight  – although, if you suffer from hot ears with all over-ear headphones like I do, you’ll still want a short break after a few hours to let the air in.

Build quality is solid, but its light design and plasticky feel do result in an air of cheapness. But considering the PuroGamer headset costs just £45, I have no complaints about its aesthetics or build quality. Well, almost none.

Despite its handsome minimal appearance, my major gripe with the PuroGamer is its non-removable cable. While it seems incredible sturdy, thanks to its braided design and thick rubber connection points, the fact that it’s non-removable means you’re looking at a complete headset replacement if the cable ends up being destroyed by an over-eager teething puppy, to name but one delightful example.

I’ve got no gripes with the plastic in-line mic and volume controls, but there’s another annoyance at the end of the cable, where it splits into 3.5mm headphone and USB connectors. While this is great for complete compatibility across all devices, both connectors are hardwired, which means you’re going to have the unused one dangling around uselessly at all times.

Volume limiting means some extra electronic trickery is required within the cable. With that in mind, I can see the reason for going down the hard-wired route – it has no doubt allowed PuroGamer to keep the price of the unit down. In an ideal world there would be a premium version of the PuroGamer available for those willing to spend a little more for flexibility – but with a product as niche as this, that’s very wishful thinking. 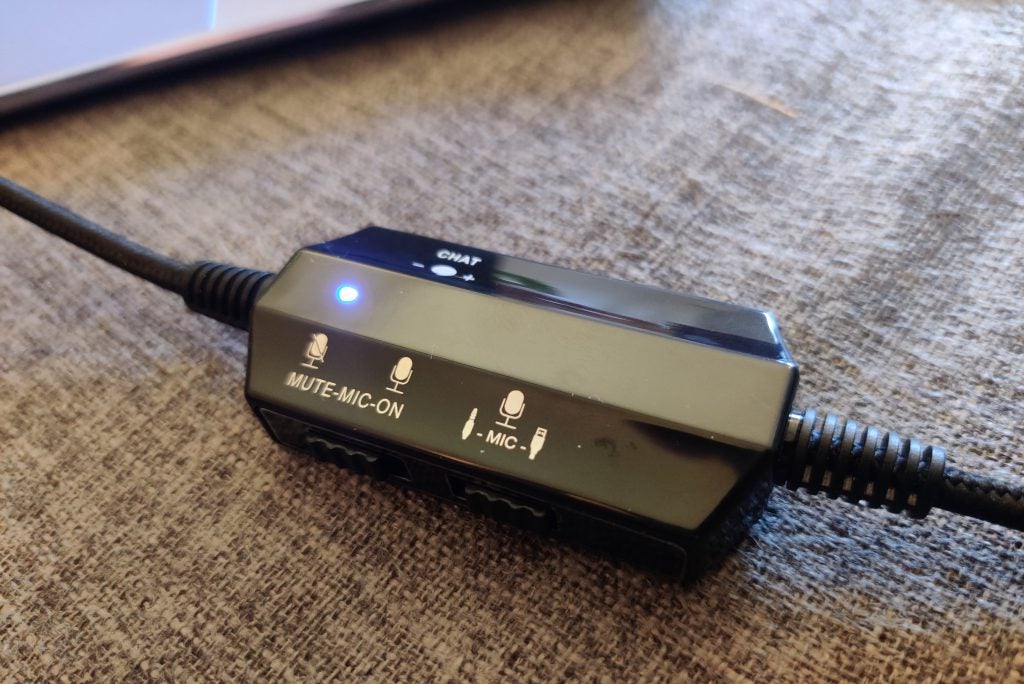 So what does a volume-limiting headset sound like? Pretty good, actually. We’ll arrive at the volume limiting in a moment, but in terms of audio quality for music and gaming, the PuroGamer offers decent, balanced sound.

It isn’t as bass-fuelled as more expensive headphones, as you might expect, but clarity is impressive – especially given its price – and you’ll find yourself clearly picking up nuanced details such as footsteps with no problems.

Ironically, the only slight gripe I have is with the volume-limiting itself. At this price, there’s obviously no active noise-cancelling tech, which is fine. However, if you’re gaming on a PC with someone else watching TV in the same room, you could find yourself being a little distracted, even with the volume cranked to max.

This is only really noticeable during quieter moments in cutscenes lacking music, or solitary exploring – but it’s definitely something to bear in mind if you don’t have the luxury of a dedicated gaming space.

Even in quiet environments with no other distractions, I’d have loved just a tad more volume. I like the way the PuroGamer sounds, so it’s a shame I can’t get just a tiny bit more out of them. The actual sound levels heard will of course vary, depending on the device you’re using. However, their 85db limit is, according to the World Health Organisation, “considered the highest safe exposure level up to a maximum of eight hours”. To be clear, the volume-limiting isn’t a deal-breaker by any means. After all, it’s the only reason you’d want to consider this headset in the first place.

As for the mic performance, I was impressed by its ability to pick up clear audio, even at normal speaking levels. Plus, the fact that it’s completely removable is another bonus – as long as you’re not the type of person that tends to easily misplace things. 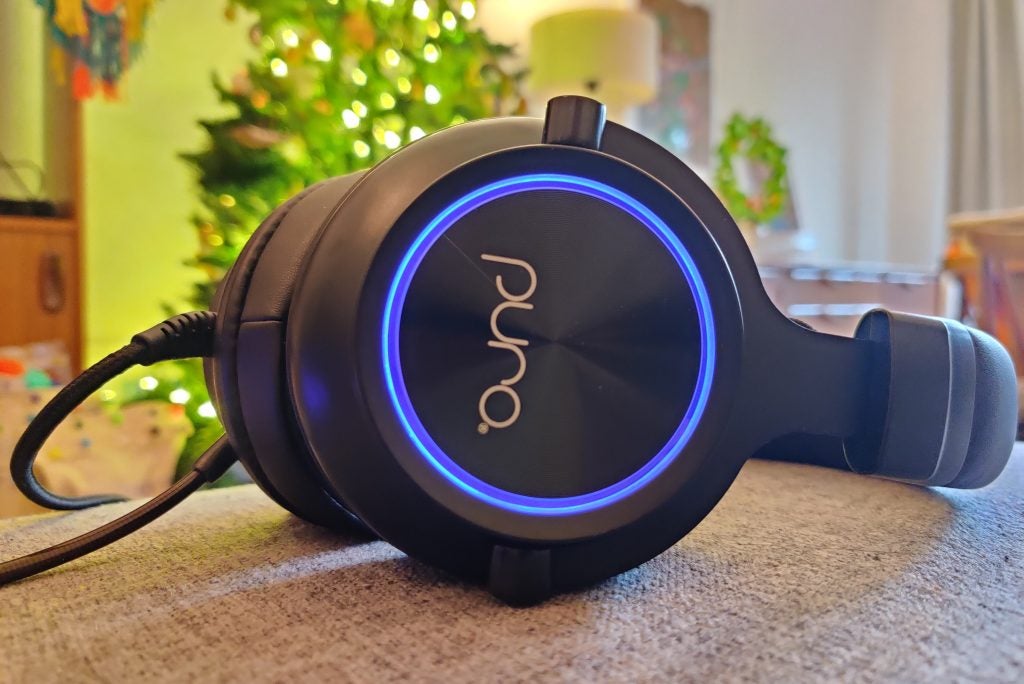 Should you buy the PuroGamer Volume Limited Gaming headset?

There’s plenty to like about the PuroGamer. It’s light and comfortable, with a clean, minimal build; detailed, balanced sound; a clear mic, and the ability to work with almost any device you care to throw at it.

It’s also super-affordable. Most of our top recommended gaming headsets cost more than £100, so to be able to get the PuroGamer for less than half that can’t be understated.

The only real niggles are the non-removable cable options, which I can easily forgive at the price. And while I’d personally have liked just a tad more volume, the headset provides an enjoyable experience nonetheless.