The PureMate 36-inch Tower Fan looks smart and has some decent features, but it isn't as powerful as we expected

Tower fans aren’t usually attractive, but the PureMate Oscillating 36-inch Cooling Tower Fan with Timer is nice to look at. With a sloped top, sizeable control buttons and a decent display panel, this tower fan should easily fit into a typical mid-size room or small office.

The PureMate 36-inch Tower Fan has some excellent features, including a switchable wind mode. Ultimately, though, it isn’t as effective as we’d expect from a large tower fan.

PureMate 36-inch Tower Fan – What you need to know

Smart and sturdy, but the PureMate Oscillating 36-inch Cooling Tower Fan with Timer isn’t so breezy

The Cooling Tower Fan’s controls are arranged in a sloped ring at the top of the unit – which, from a distance, looks a little like an ashtray. Below it is a scooped-out section that reveal’s a temperature display. Although the display looks permanently misted up, you can clearly make out the indicators for the speed, temperature, mode setting and 12-hour timer from across the room.

You can control all the above, along with the 60-degree oscillation, via the remote. The display automatically shuts off a minute or two following your last command, so the lights won’t disturb you at night. Unfortunately, you can’t turn off the command beep. 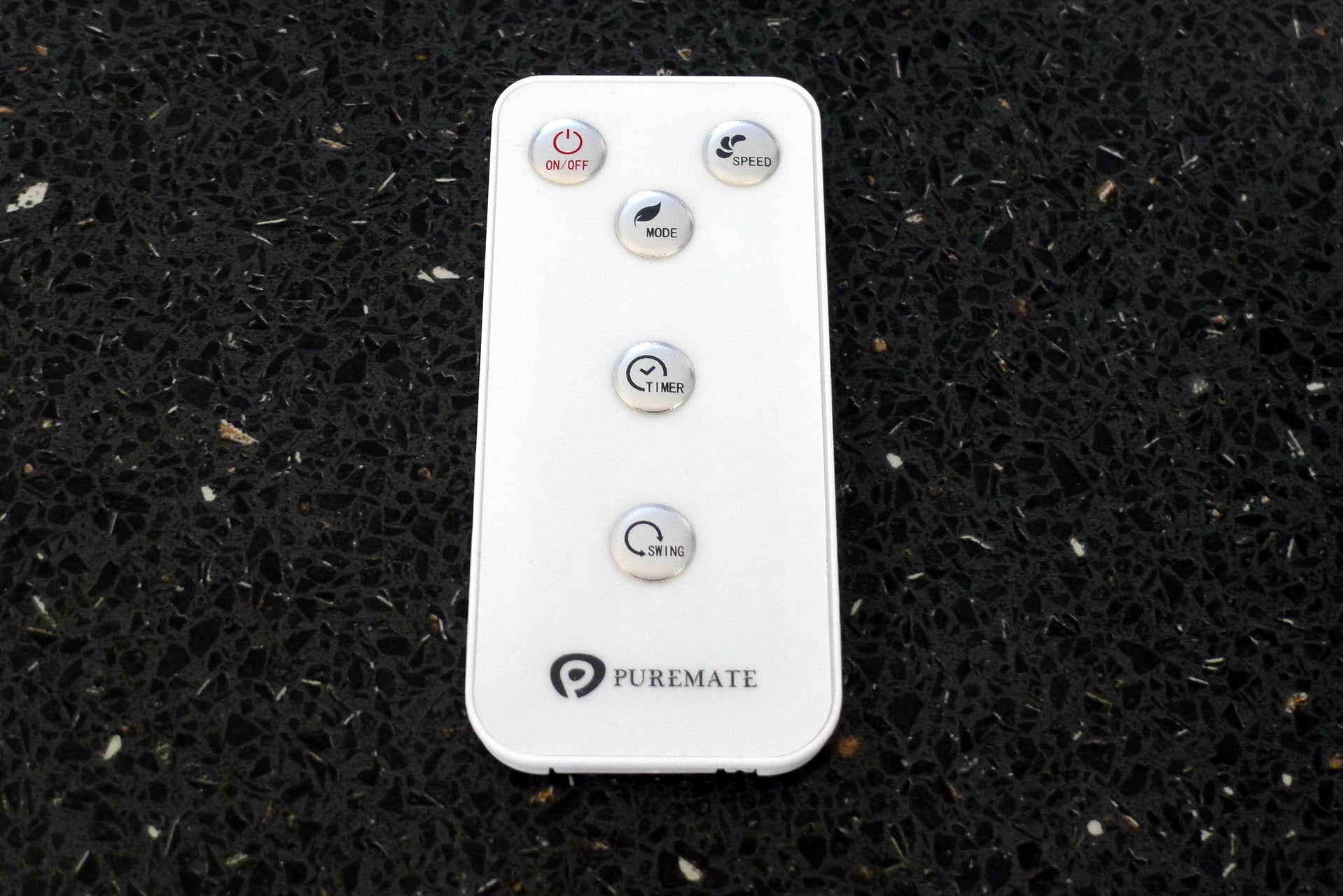 This isn’t an especially loud fan, even at the top of its three speeds, but it emits a slight whine that could stand out in some environments. Unfortunately, while it generates a decent breeze, it isn’t as powerful as we’d expect from this size of tower fan. Aside from the default constant wind mode, “natural” mode aims to emulate random gusts of wind, while three sleeping modes blow intermittent gusts, slowly reducing the power to a minimum.

Like many tower fans, you need to clip this fan’s base together and screw it into place. Whilst doing so you also need to remember to feed through the power cable, which we measured at just 135cm long from the point at which it emerges from the rear of the stand.

Our other measurements revealed some interesting things about the PureMate 36-inch Tower Fan. For a start, we make it only 890mm (35 inches) tall. We measured its grille at 445mm (17.5 inches), which is about 45mm shorter than the grille on the competing VonHaus 35-inch Tower Fan.

The shortish grille may be part of the reason that this fan is less powerful than we’d expect. Even close-up, at 15cm, we measured wind speed at just 2.9m/s on the lowest setting, and 3.8m/s on the highest. From a metre away this fell to just 1.9m/s and 2.4m/s.

We noticed that the output column of air seemed fairly narrow, and was strongest a few degrees to the right of the centreline. Even trying to find this sweet spot, from 2 metres the maximum breeze was just 1.4m/s, and the minimum fell below the 0.8m/s threshold of our anemometer. That’s poor for a big tower fan.

Our noise measurements underline our impression of a reasonably quiet fan. One metre in front, we recorded just 40.9dB at low power, and 47.4dB at full chat. Even sitting idle this fan consumed 1W of power, and its consumption ranged from 25-31W in use. We noticed that while the temperature reading was accurate when we first plugged the fan in, it crept up over time, leaving the fan overestimating temperature by three or four degrees. 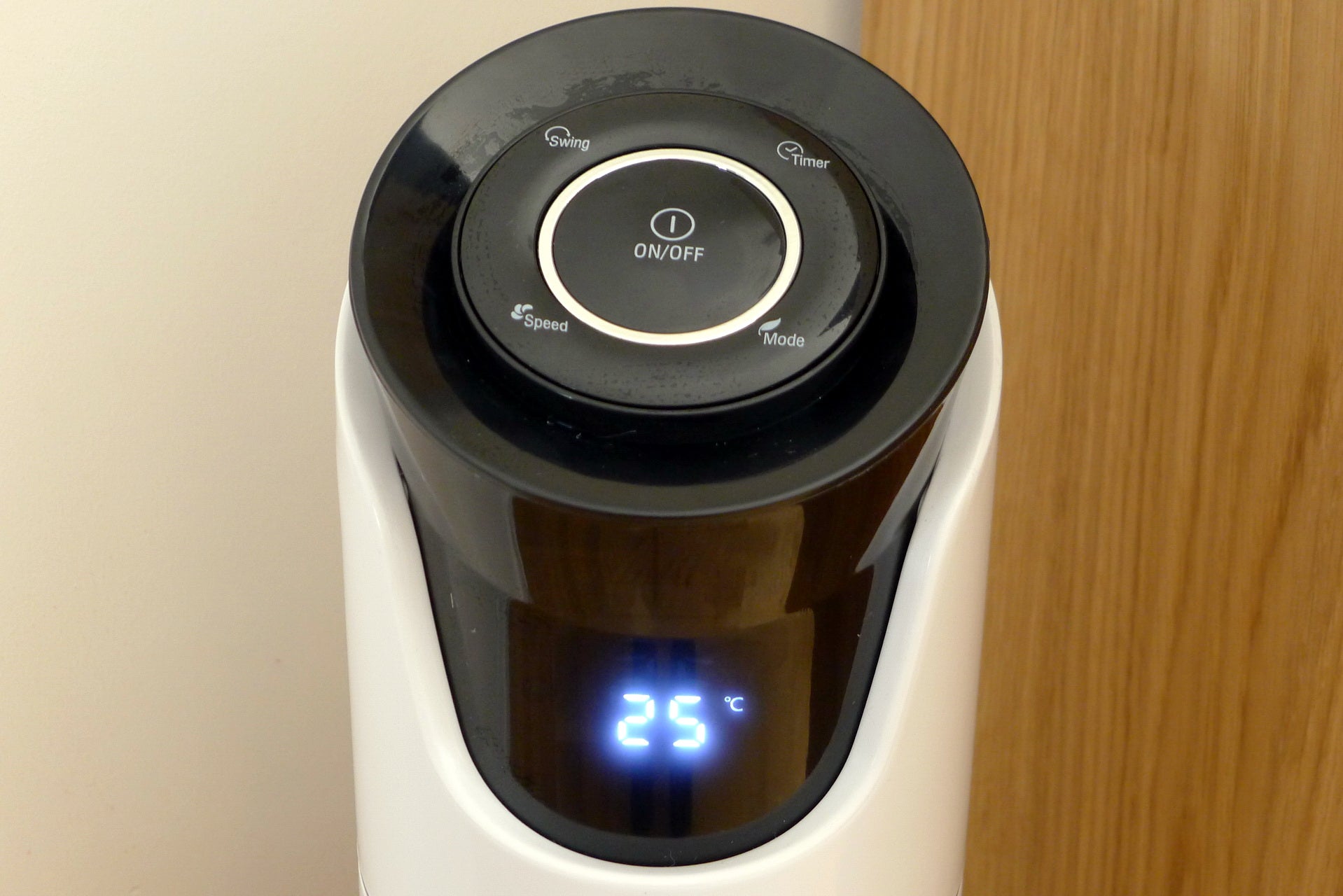 We found that the temperature reading wasn’t that accurate

While this isn’t a particularly powerful tower fan, it isn’t a bad product. It looks fairly good, and pairs an effective remote control with a display you can read from across the room. Its comparative quietness makes it a good choice for bedrooms or other smaller spaces, but it doesn’t stir up the powerful breeze we’d expect from the best tower fans. As such, it isn’t a great choice for larger spaces or very hot environments.