What is the Pure Siesta S6?

As well as DAB+ and FM tuners, this bedside radio has Bluetooth built in. This means you can connect your phone and stream your own tunes through the Siesta S6, rather than having to listen to some unnaturally chirpy breakfast DJ first thing.

But is it worth that premium price tag? 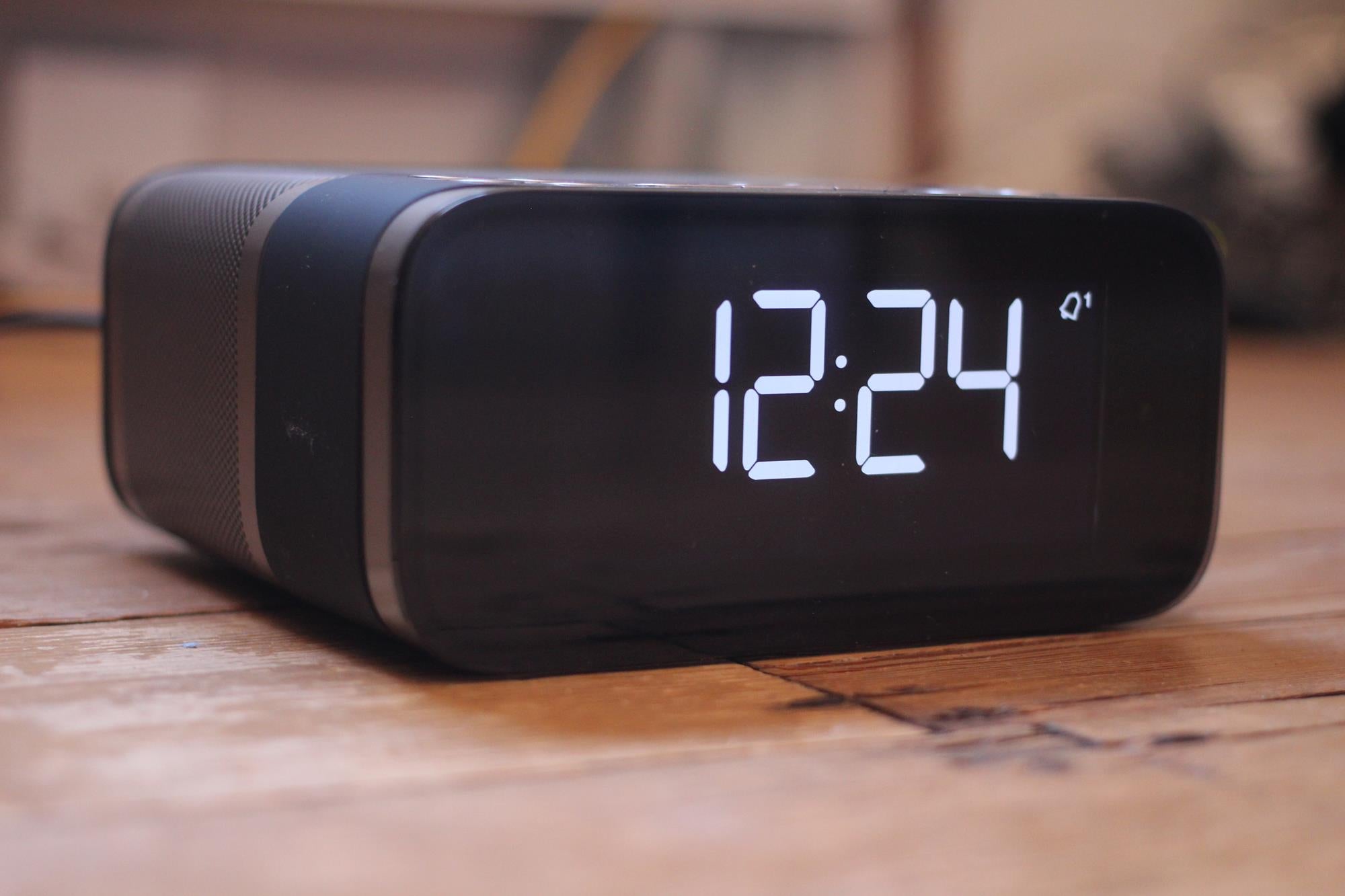 The S6 certainly looks smarter than most clock radios. Its metal chassis is a world away from the cheap boxes of plastic you’d usually see flicking through the Argos catalogue.

Available in combinations of black and grey or silver and white, the S6 is reminiscent of most top-end smartphones – as if it were designed specifically to sit alongside your new iPhone or Galaxy S8.

The Siesta S6 will take up a fair amount of space on your bedside table, mainly due to the large speaker grille, but also a result of the sheer number of buttons on the top. There’s the regular on/off button, volume controls, a select button with directional controls, plus various alarm and snooze buttons – 14 in total. There’s even a Siesta button, which allows you to retreat to bed in the afternoon and be woken up anything between five and 90 minutes later. 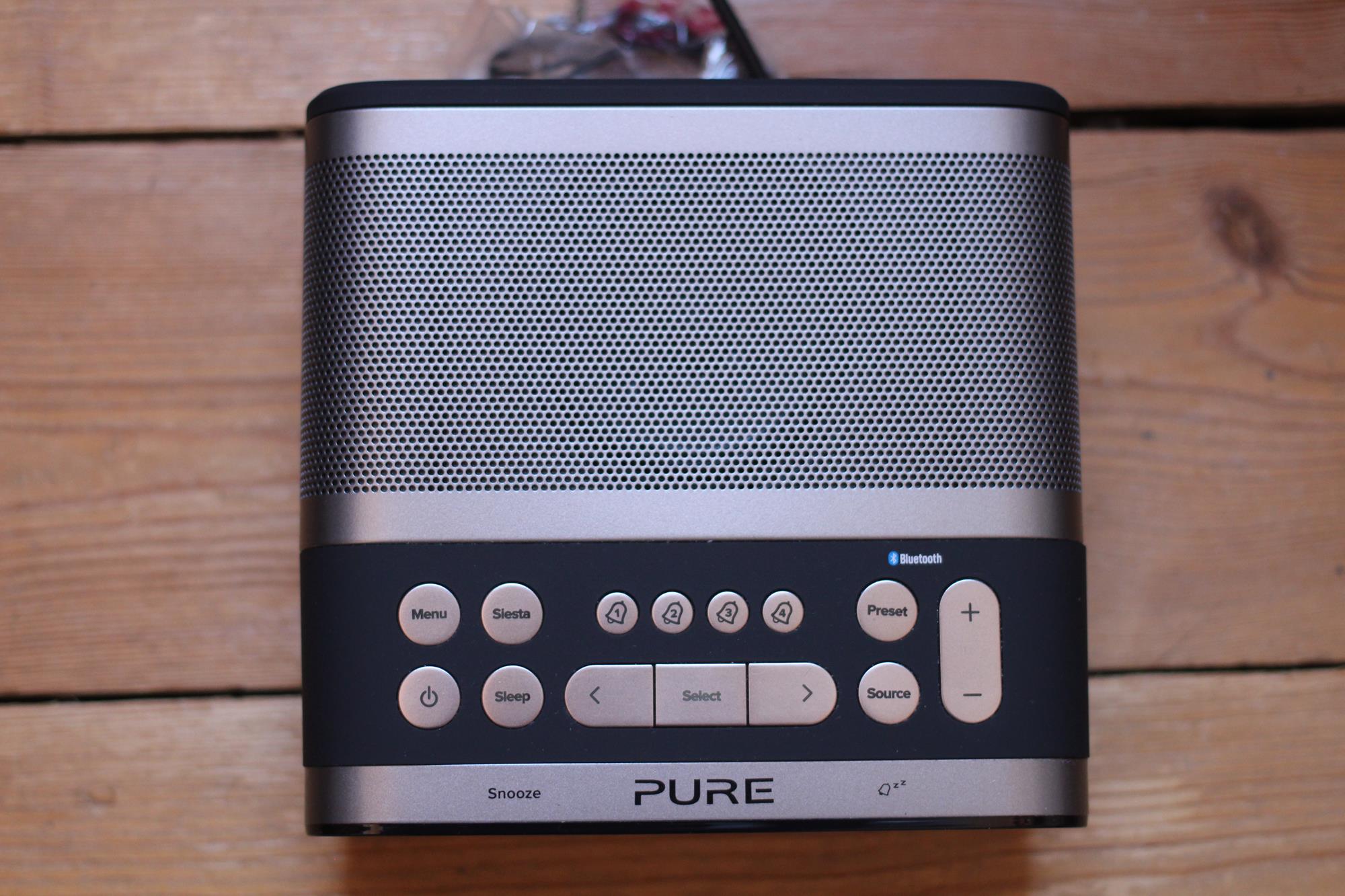 Speaking from experience, the easier an alarm is to switch off, the less likely it is to get me out of bed. With that in mind, the touch-sensitive band at the front of the S6 makes it very easy to delay the day for an extra few minutes each morning – sometimes, even by accident. That could prove dangerous for some.

Unfortunately, the rest of the S6’s buttons aren’t on a par with how the S6 looks. They’re a little on the clicky side and just aren’t as satisfying to press as they should be. Although at the time of the morning you tend to be reaching for them, nothing but more shut-eye is all that satisfying anyway.

Round the back there’s a USB port into which you can plug your phone charger, sparing those valuable bedside sockets, while 40 station presets will cater for even the most hardcore radio fan.

There’s even a 3.5mm socket on the rear, so you can listen to the radio via headphones in bed – which I’m not sure that anyone has, or will, want to do. 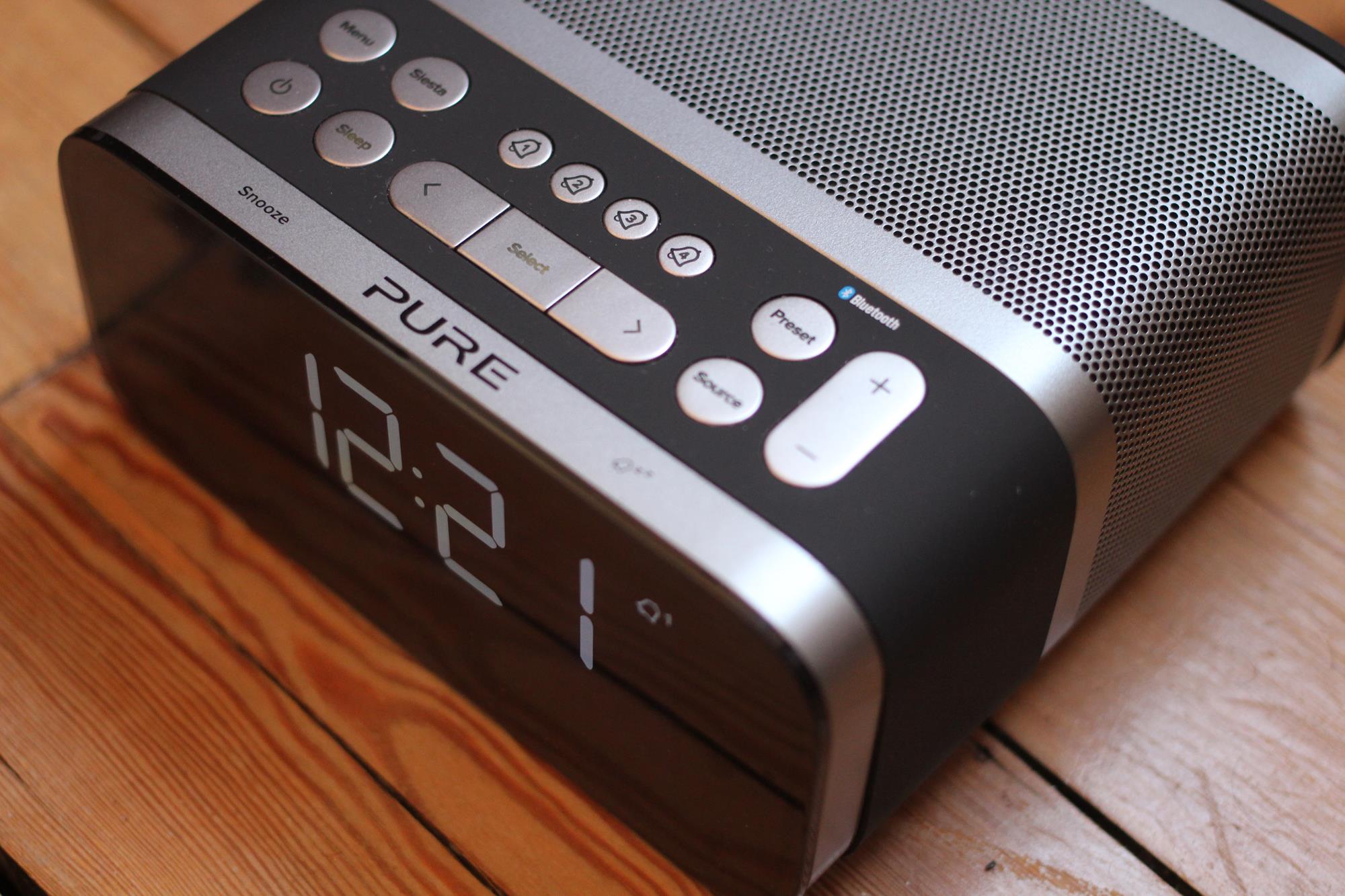 The numerous buttons make it difficult to access everything the S6 can do without consulting the instructions at least once, but setting up its basic functions is easy enough.

It’s possible to set four separate alarms on different schedules, so you won’t get rudely awaken by your weekday alarm on Saturdays. Each one has a dedicated button, making it easy to switch them on and off.

You can choose to either wake up to the radio or a standard alert tone, which gradually becomes louder; it doesn’t sound particularly pleasant, but that’s probably the point. There’s no option to use music from your phone, which is a shame, particularly since it’s likely to be connected via that USB port anyway.

The CrystalVue+ display is of a decent size, taking up the entire front of the S6. The large numerals dim when it’s dark, so you don’t get dazzled when you wake up and check the time in the middle of the night. Display quality is top-notch, with sharp digits and clear icons that show you which alarms are set.

Connecting your phone over Bluetooth is simply a case of switching to Bluetooth mode with the source button, finding the Siesta in the list of Bluetooth devices in your phone’s settings, and selecting it. There’s no PIN code to enter, although a bit of audio feedback to indicate that it had connected might have been nice. Annoyingly, it won’t automatically reconnect each time you switch the source to Bluetooth and your phone is in range – you have to actively select it each time.

Once that’s done, it will play any sound your phone makes through the S6’s 2.5in speaker, including ringtones and notifications. 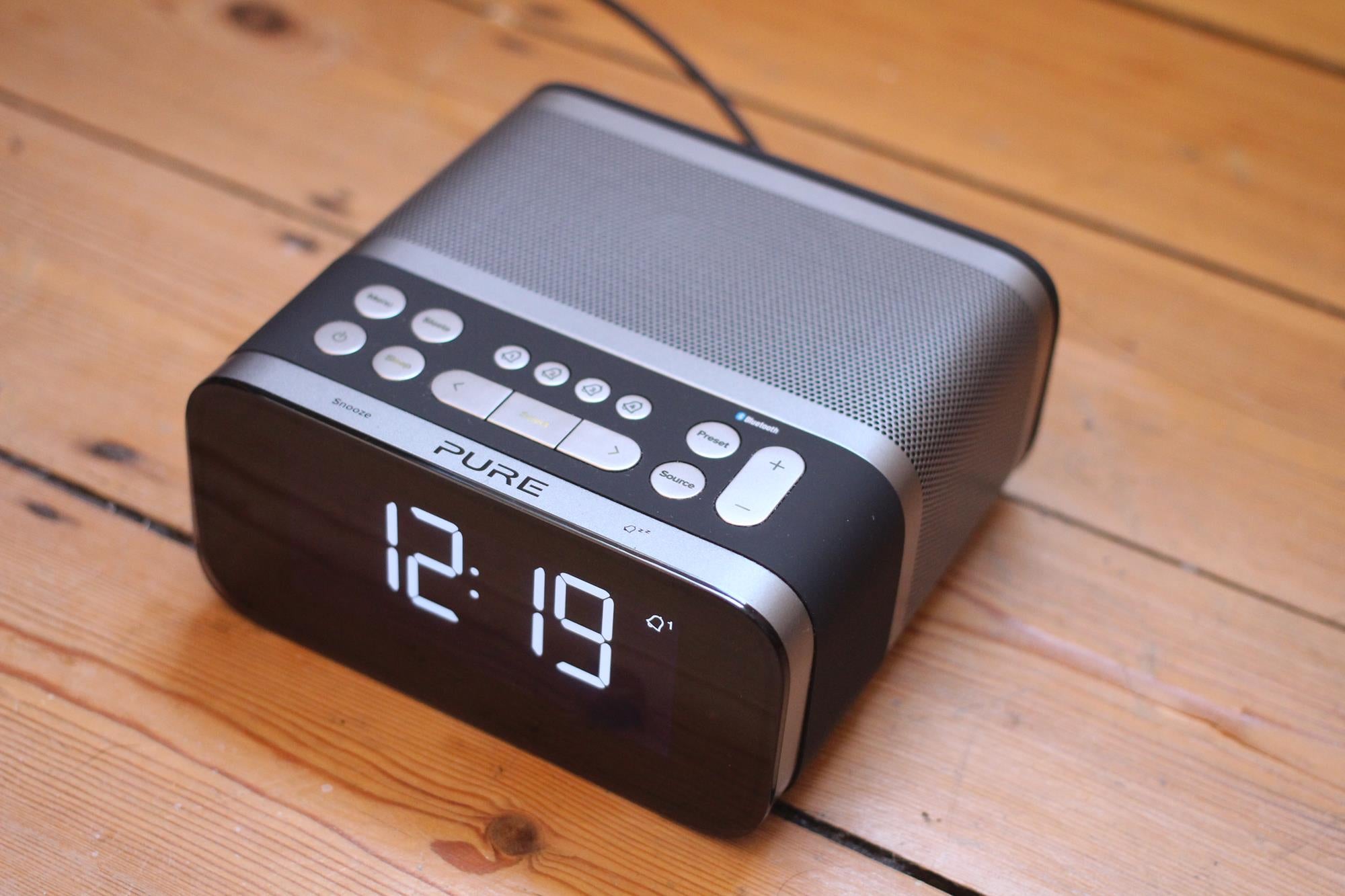 If you wake up to Radio 4 then you’ll be very pleased with the Siesta S6. Voices sound great, displaying a real warmth that will ease you into the day – a bit like being gently tickled awake by John Humphries.

If you’re more of a 6Music kind of person, the Siesta sounds fine playing background music while you’re getting ready to go to work, but not much more. You wouldn’t want to use it to soundtrack your day if you work from home, for example.

Connect your phone and the first thing you’ll notice is a fairly major disparity between radio volume and the sound emitted over Bluetooth. I had to pump it up to even hear it.

In general, the Siesta sounds fine – but not £130 fine. Compared to a similarly sized and similarly priced Bluetooth speaker, the sound it produces lacks weight and body. There’s a flatness to it that means it’s difficult to get excited by what’s playing.

The fact that you can’t play music from your phone over USB is also quite baffling. Most bedrooms aren’t that big and, chances are, you’ll have your phone sitting next to the S6 when playing music through it. Why not allow a wired connection, which would also allow you to wake up to your own tunes? 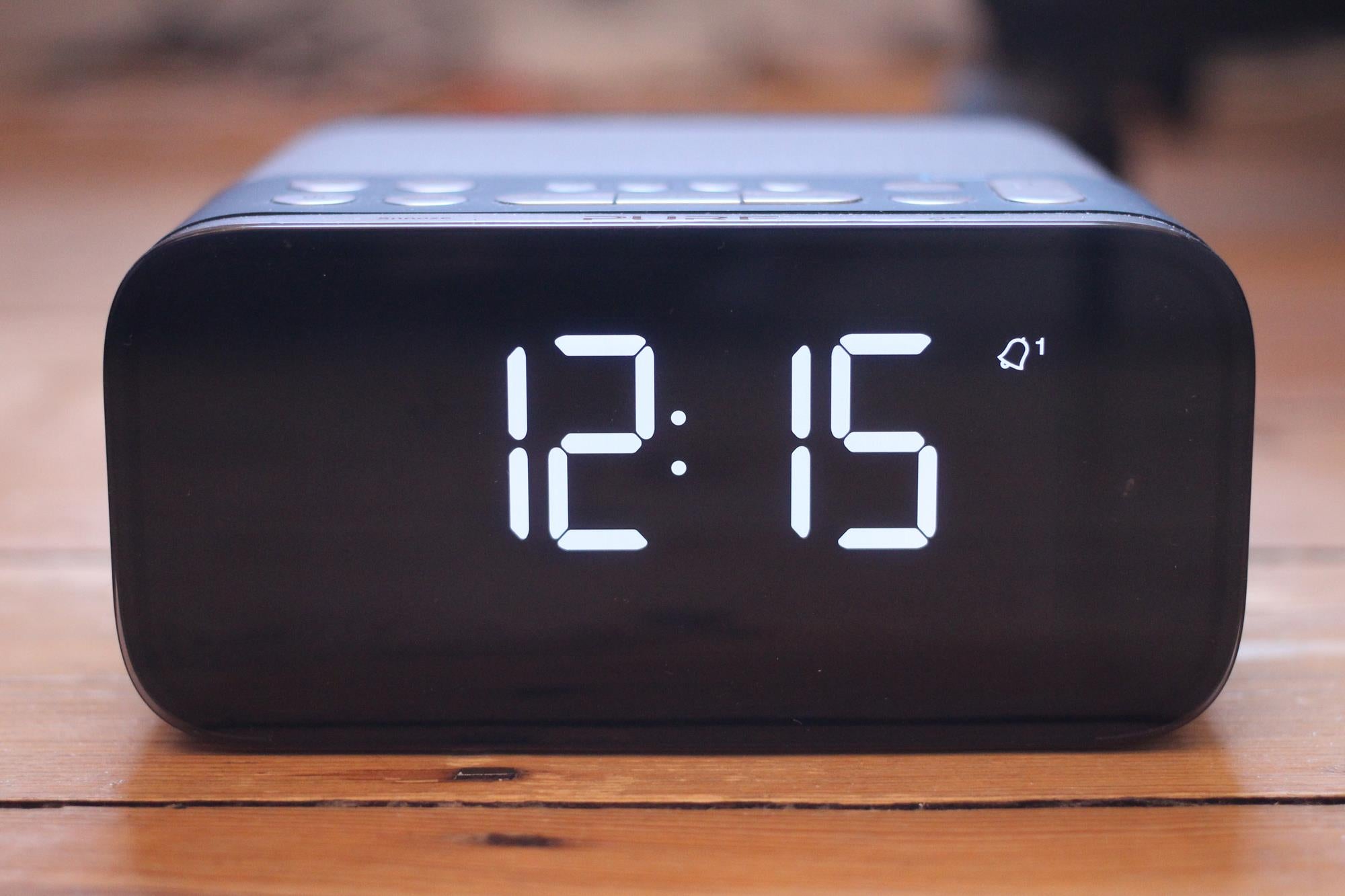 Why buy the Pure Siesta S6?

As slumber interrupters go, there’s no denying the S6 is one of the nicest around. However, it’s difficult to justify spending £130 on an alarm clock when your phone will get you out of bed just as effectively.

Its screen is lovely, and the USB port will save you a socket by the bedside, but the Siesta doesn’t really sound good enough to make it a better option than buying a cheaper alarm clock and a decent Bluetooth speaker (UE’s Wonderboom, for example) to sit next to it.

A stylish chunk of bedside tech – but the Siesta S6 just doesn’t offer enough for the price.