What is the Pure Jongo T6?

The Pure Jongo T6 is the largest wireless streaming speaker in the Jongo family – as of January 2014. This big daddy box is designed to be able to lead the charge as the centre of your home hi-fi and is a direct rival for systems like the B&W Zeppelin Air and the Sonos Play:5.

It’s easily the best-sounding speaker in the Jongo range and has enough gusto to fill your living room with music. However, some sonic issues mean it just misses out on our Recommended award.

The Pure Jongo T6 is the biggest of the Jongos, but it is still designed to fit in with your living room. It’s a single curvy box that can sit either on its side or upright. Two of the things can be paired up in stereo, and they will look a bit like a pair of large bookself speakers when sitting upright as a twosome. You can even turn the Pure logo on the front around if you prefer.

The speaker itself comes in black or white, with a black grille included with both as standard. More colourful grilles are available too, in a wide and expanding array of shades. However, the brighter shades don’t really suit the T6 as well as something like the small Jongo S3. We’re happy with black on black, but Pure is planning on releasing some classier low-key shades this year. 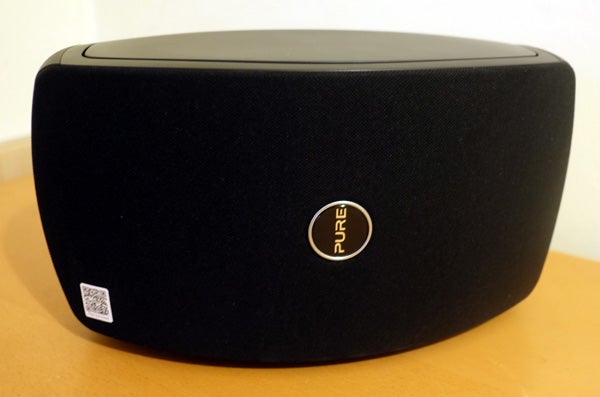 Aside from the fabric grille the Pure Jongo T6 is all-plastic. It’s not flash or particularly pretty, but it is solidly made. The one issue we can imagine cropping up is that as the rubber feet pop off to allow upright positioning without bit sticking out, you might end up losing them. However, as this speaker isn’t meant to be moved around much – it has no internal battery – it’s not a significant problem.

The Pure Jongo T6 is largely controlled using your phone, leaving just a few controls on the box itself. There’s a power button, a couple of volume controls and a mute button. These are neat and handy additions. And they’re neatly stowed away on one side of the T6, so don’t spoil the look.

Some pictures of the controls and removable feet – 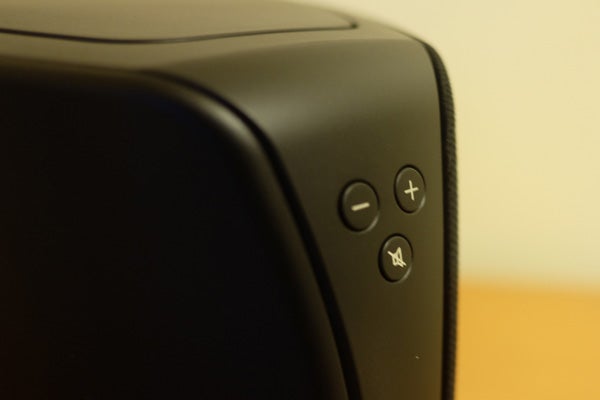 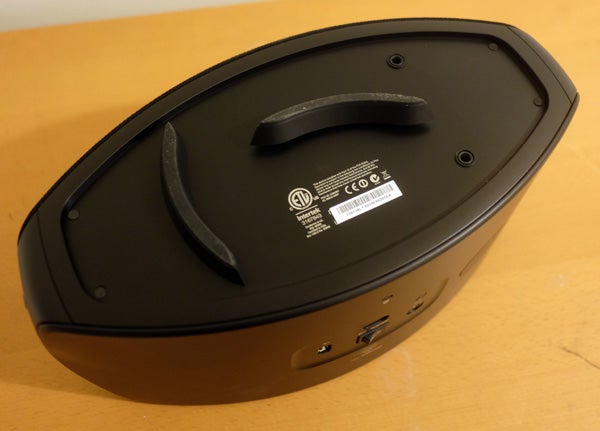 One of Jongo’s big selling points is its multi-room abilities. You can pair up multiple Jongo speakers as a stereo unit, and control multiple separate speakers using the Pure Connect app, the brain of any Jongo speaker.

However, the Pure Jongo T6 also works very well as a standalone speaker. It offers streaming over Bluetooth as well as Wi-FI through Pure Connect. That means you can stream pretty much anything from your phone, be it Spotify, a game’s audio or Pure’s own music streaming service. 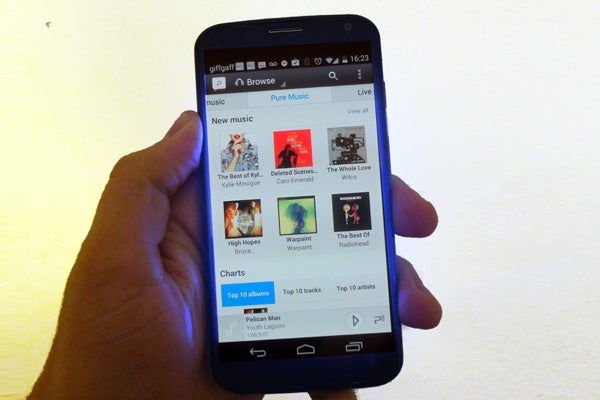 Switching between Bluetooth and Wi-Fi streaming is dead easy too. With the latest firmware the T6 can connect over both types to a single phone at the same time (both can’t play simultaneously though). Real technophobes who aren’t used to using a Bluetooth streaming device may trip up, but most shouldn’t encounter any issues.

At the moment, though, what you can do over Wi-Fi is slightly limited. You can only connect through the Pure Connect app, which gives you access to the various Pure music sources and any music on your phone.

Pure’s own audio hubs include a decent all-you-can-eat streaming service that costs just £5 a month (a bargain, although audio is streamed at lowly 128kbps), a good internet radio service and Pure Sounds.

This is a slightly bizarre library of audio loops including such delights as the sound of a Mexican farm and a Costa Rican jungle. Some are pretty useful, though. There are tones for tuning an acoustic guitar, white noise (good for those who have trouble sleeping) and lullaby tunes to help get the kids to sleep. Pure Sounds is a genuine USP, and while it’s a bit mad we do like it.

Pure is planning on opening up its Jongo system to let other apps interface with speakers like the Pure Jongo T6, but for now if you want to stream from things like Spotify, you’ll have to do so over Bluetooth. It’s a minor inconvenience, though, and Pure says we’ll start to see the Pure system branch out by late March.

The flexibility of Bluetooth is something you don’t get in system from arch rival Sonos, and the Pure Jongo T6 also has a 3.5mm auxiliary input. Although constrained in some respects, it’s much easier for a friend to share a tune they’ve just found with a Pure Jongo T6 than a Sonos Play:5. 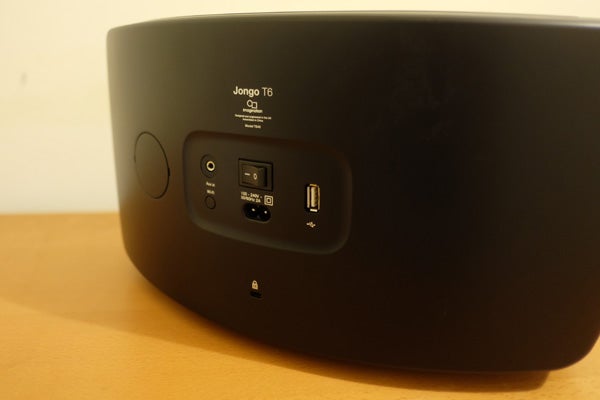 Setup is reasonably hassle-free too these days. The Pure Connect app offers a little video tutorial if you get stuck. A Wi-Fi button on the back of the Pure Jongo T6 gives the speaker output its own Wi-Fi network. You connect to this with a phone and it’ll take you to a webpage where you teach the Jongo your network’s security code. We did have to try this a couple of times. The first time around the Wi-FI network didn’t appear, but once set up we experienced no more issues.

We were pretty critical of the last Jongo we reviewed, the Jongo T2. It had two fairly basic full-range drivers that did not excite. When we first took off the grille of the Pure Jongo T6 we were worried we might be in for something similar.

The drivers at first appear to be normal full-range drivers, but they’re actually quite different. The Pure Jongo T6 has two 5.25-inch concentric drivers, which means they encompass both a full range driver and a tweeter, which lives in the centre. 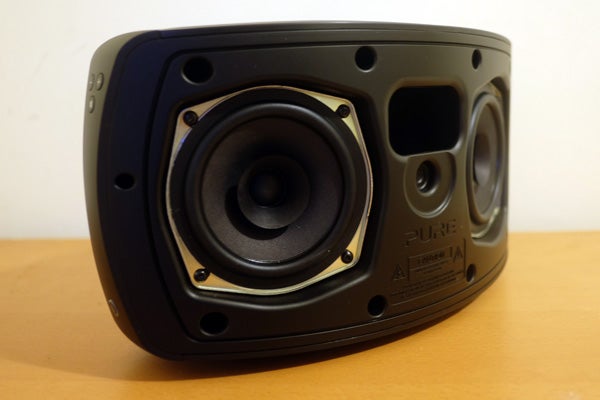 Top-end clarity is far better than in the Pure Jongo T2, with quite sparky treble. With reasonably high-quality content it’s great, but it’s not so kind to the low-quality streams you get with most internet radio stations, where it can turn harsh and sound poorly integrated. Those who dislike bright treble should probably stay away, and Pure should arguably have smoothed out the treble a little to appeal to the widest audience.

However, the Pure Jongo T6 is largely tonally sound. It’s not too bassy and there’s a reasonable amount of power on offer here – much more than the smaller Jongo T2.

Sound quality is not perfect, though. While bass authority is good to an extent, the Pure Jongo T6 fails to reproduce low bass and sub-bass properly at lower volumes. We had hoped for slightly better from 5.25-inch drivers (which is about as big as you’d get from a lifestyle-oriented speaker like this), but it is likely what comes from using full range concentric drivers like this, rather than a ‘dedicated’ bass driver.

We’re also not convinced the  Pure Jongo T6 is adequately ported. Low bass performance improves at mid-high volumes, but the lone front port turns into a noisy woodwind instrument as far too much air tries to rush through its fairly small aperture. 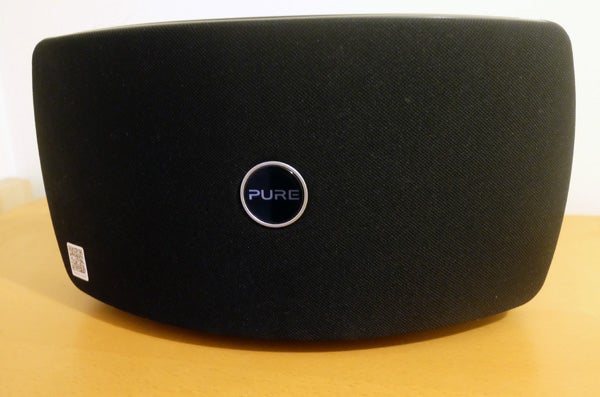 Should I buy the Pure Jongo T6?

The Pure Jongo T6 is a decent-sounding wireless speaker with a software infrastructure that’s getting better every month. It’s not quite perfect, but with a little effort the Jongo T6 can already do everything you want it to. While it’s not as beautiful as some of the competition, it is generally a bit cheaper too.

It’s £50 less than the Sonos Play:5 and £200 less than the B&W Zeppelin Air. Its sharp treble will probably turn off more than the sound of those rivals, but the saving does count for something.

Decent sound and flexible wireless streaming make the Pure Jongo T6 the strongest member of the Jongo family yet. The sound isn’t perfect, but it should make a good addition to any lounge.

Next, read about the Pure Jongo T6’s little brother in our Pure Jongo S3 review.