What is the Pure Evoke F3?

The Pure Evoke F3 is a DAB radio, one that packs in Bluetooth and Wi-Fi to let it stream internet radio and audio from your phone.

It includes plenty of features and is easy on the eye. Sound quality is decent too, being far better for music than pretty much any single-speaker Evoke model to date.

If a radio is what you’re after, I think you’ll be more than happy with the £120 Pure Evoke F3. 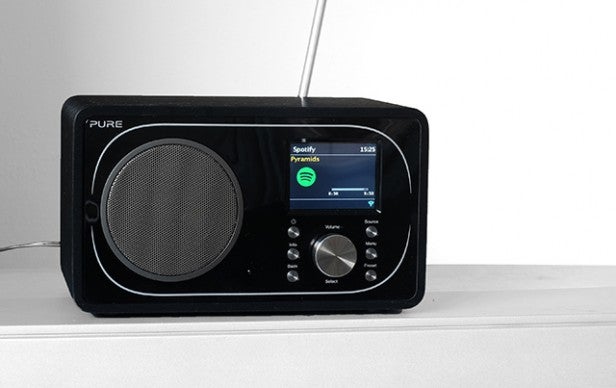 The Pure Evoke F3 is a mix of new and old. From a distance, it looks like your average DAB radio. It’s a rectangular box, with an aerial sticking out of the top. The Evoke F3 will look right at home on your kitchen worktop, or on a table beside your bed.

It lets you tune into DAB and FM radio stations, and reception is great with the antenna fully extended.

Up close, however, you’ll notice that it isn’t the same as the classic Evoke radios we’ve reviewed over the years.

First, there’s a colour screen. This is a handy addition because the Pure Evoke F3 doesn’t only play radio stations, so you’ll be required to do a bit more navigating of the interface. And let’s be honest, it also makes the unit look a little more modern. 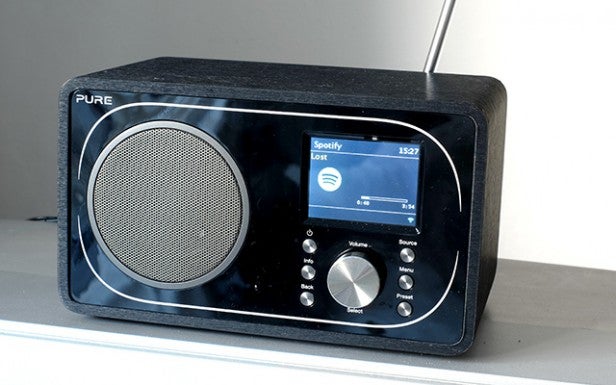 This is reflected somewhat in the F3’s overall design. Where classic Evoke radios are packaged in lacquered-wood shells and are more retro in look, the F3 sheds the vintage garb. It’s replaced by a plastic veneer shell that almost has the texture of brushed metal, and a moodier-looking gloss black front panel. It’s still wood underneath apparently, but I wouldn’t have known unless I’d pored over Pure’s product page.

I think this style works a little better in the Evoke F4, which mixes more elements of the classic Evoke style with the F-series’s moodier look – but judge for yourself. Not bad-looking, is it? 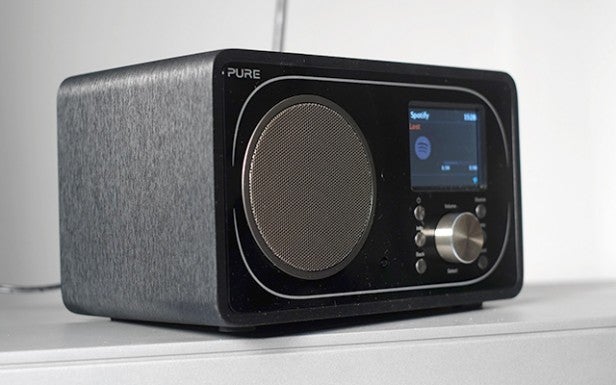 The Pure Evoke F3 doesn’t use touchscreens and gestures; a single rotary dial provides a control to choose stations and adjust volume, and there are a few auxiliary buttons around it. Pure’s decision to ditch the touch-sensitive panels of the F4 is a good one.

I found the interface simple to use. A tap on the dedicated source button lets you switch between Bluetooth, Spotify and the radio. The Wi-Fi and Bluetooth connections here let you stream just about anything from your phone or tablet, and even any “shared” music from your laptop for desktop.

Aside from inputting your Wi-Fi password on first setting up the F3, using this radio is simple. While it supports Spotify, you don’t search through Spotify on the box itself. Instead, you use Spotify Connect to pipe audio directly from your phone’s Spotify app to the Pure Evoke F3. It’s dead easy.

The internet radio section lets you browse through thousands of stations worldwide, as well as some of their linked podcasts. If you want to go even further with wireless control, Pure offers a a neat Pure Select app that lets you control the source from wherever you are in the house, over Wi-Fi. 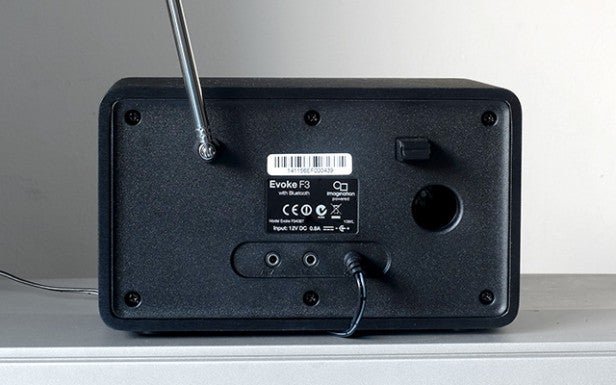 At first I’d assumed the F3’s wireless offering would be a little simplistic, judging by the on-box interface and the fact that it doesn’t auto-switch between sources when, say, you fire a Spotify stream its way. However, it’s actually very comprehensive.

Bluetooth is the simpler option. You simply hook up the radio to your phone or tablet wirelessly – it takes only a minute – and all the sound from your device is played though the Evoke F3. This includes games and notification sounds.

There are a few elements that could be a little more advanced, however. First, I experienced some lag when navigating through the menus. It’s consistent, feeling a little like scrolling through the menus of most TVs. However, now that we’re all used to lightning-fast phones, it’s a pain. 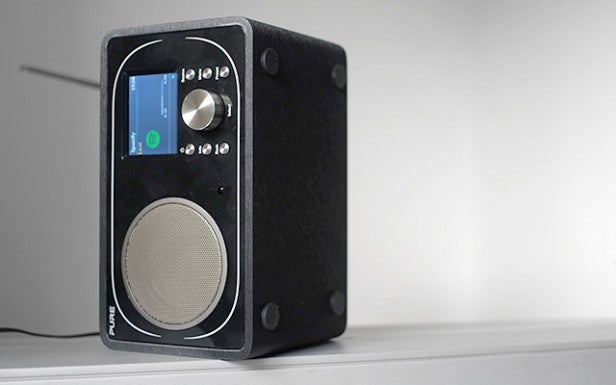 The Pure Evoke F3’s display, too, could be better. It’s a colour screen, but it uses the same style of TN display on older colour radio sets. It looks perfectly fine front-on, but from an angle the display begins to look odd because of something called contrast shift. I’d really like to see Pure switch over to using IPS or OLED displays, such as phones, in the future. After all, at £129, the Pure Evoke F3 could be considered a “premium” device.

Also note that, unlike the Evoke F4, the F3 doesn’t accept one of Pure’s long-standing ChargePAKs. It has to be plugged into the mains all the time. It also lacks Pure’s signature snooze handle – it lets you snooze your alarm with a touch of the metal bar – which I think is a must-have if you fancy a Pure radio for your bedside table.

It does feature and alarms (there are two programmable alarm options), but the Evoke D4 and Evoke F4 feel a bit more ready for bedroom duty.

The Evoke F3 also comes with a remote control, of the sort you might get with a mini-system. See the little black circle to the left of the main buttons? That’s an IR receiver. 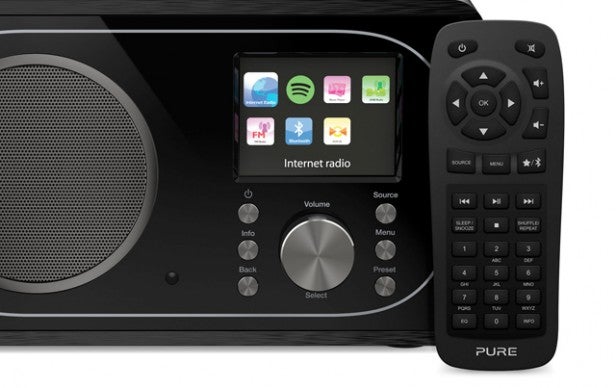 The Pure Evoke F3 is a traditional device with a few extra connectivity add-ons to stop it seeming like a relic of the past. Its speaker style is similar to previous Evokes, though.

It uses a combo of a wooden, non-ported cabinet and a 3.5-inch driver to provide all the sound. No tweeters, no passive radiators – these are the companion drivers used in all the best small wireless speakers to radically increase bass power. It has a bass port to help, but that’s it.

Ignoring all these tech advances, the Pure Evoke F3 sticks to its guns but still provides surprisingly good sound. It’s of decent quality, it goes louder than you’ll need if you’re using this as a radio, rather than your main sound system, and totally avoids the nasty “tinny” small radio sound that made the recent Goodmans Go Dash so disappointing. 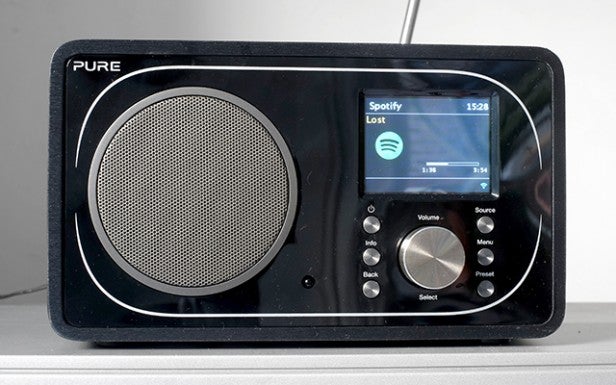 There’s a decent amount of bass, but not so much that its resonates beneath voices in spoken word stations, muddying up the sound. For listening to podcasts or stations such as Radio 4, the Pure Evoke F3 is perfect. It’s much louder and more powerful-sounding than the Evoke F4.

Bass scales nicely throughout the volume range, which is always a challenge when dealing with a smallish box and speaker driver. The Evoke F3 doesn’t sound thin, muggy or overly bassy at any volume.

That Pure has managed this with a single driver is impressive. Thanks to its solid bass production, you need to be more careful about its placement than with other Evokes however. Positioned too close to a wall and you’ll experience a bit of bass boom.

The Evoke F3 is much better at delivering music than many previous Evokes, and all the single-driver units I’ve heard (there are Evokes with two 3-inch drivers). You can whack up the volume to near-max without serious distortion; there’s just an ever-so-slight strain that makes the F3 sound a little more comfortable at 80% volume and below. For example, if you need it to compete with the noise of the extractor fan while cooking in the kitchen, you’ll be well within this area. 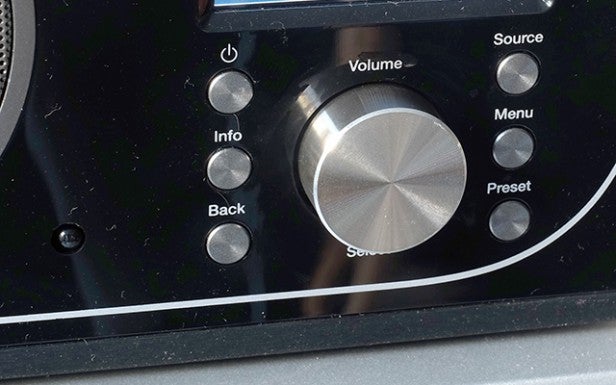 My only reservation is that if the very direct feel of a good old-fashioned DAB radio isn’t an appeal in itself, I’m not sure Pure has done quite enough to compete with the growing crowd of quality Bluetooth speakers.

Smaller units sound as big or bigger by using more “modern” driver layouts, and at a similar price the Ministry of Sound M presents far better dynamics for a much livelier sound. The Wi-Fi version is significantly more expensive, though.

These comparisons aren’t all that fair, however. A Bluetooth speaker is exactly that, while the Evoke F3 packs in a DAB radio, an FM radio, an internet radio UI, Wi-Fi, a screen and Spotify integration. There’s plenty more on offer here – and there’s no major price premium either. This is a seriously competitive package.

If you’re looking for a kitchen hi-fi, this is actually a much better option than the more expensive Evoke F4. By moving from the classic radio sound to something more like a radio-music-system hybrid, the Evoke F3 actually pumps out tunes with a far more punch.

It’s only the flat-ish mids and lacking separation that make me interested to see what Pure could come up with if it packed in drivers closer to those of a speaker such as the Bose SoundLink Mini II. The mids are a little lifeless, putting a stopper on the dynamics of vocal tracks in an otherwise good signature.

I should stress that I only feel compelled to make this more in-depth criticism because the Evoke F3 has managed to elevate its output beyond that of a mere DAB radio, closer to that of a dedicated active speaker or mini hi-fi. 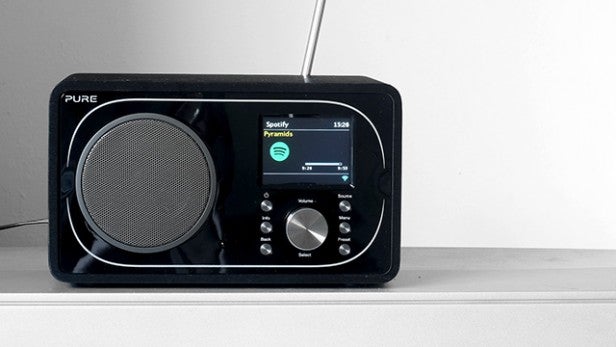 Should I buy the Pure Evoke F3?

While the Pure Evoke F3 seems like a lower-end, cheaper version of the Evoke F4, it’s actually a different beast altogether. Where the Evoke F4 is perfect for the bedroom, the F3 is much better for the lounge, or perhaps a big kitchen.

As well as including an IR remote, it has more powerful, much louder sound. It seems like a radio that really wants to be thought of as an all-round music system.

It has a beefy, powerful sound that shrugs off the usual sound limitations of a DAB radio. You can get slightly better sound from some simpler wireless speakers at this sort of price, but given the volume and bass limits of most radios, what Pure has achieved here is top-notch.

A petite wireless radio that offers much more powerful sound than its predecessors.