Okay, okay, we know it’s a bit silly: a DAB radio that looks like a guitar amp. But, if you’re looking for a fun gift for a rock-lovin’ friend or family member or just need something to finish off you’re home studio in style, this radio could be right up your street. Pure is one of the most respected manufacturers of compact desktop DAB radios, producing as it does well made, decent sounding, and above all easy to use products like the Pure Evoke Flow and Pure Evoke 3. Meanwhile Marshall Amps has been producing some of the world’s finest guitar amplifiers and speaker cabinets for over 50 years. With that sort of heritage, what can go wrong?

The styling of the Pure Evoke-1S Marshall is obviously an homage to the classic Marshall amp look with black vinyl covering, big chunky plastic corner protectors, a large rubber handle, white Marshall logo, and gold hardware. It’s certainly not going to be to everyone’s taste but within the confines of making a radio that looks like a Marshall amp, it’s about as good as we would expect. 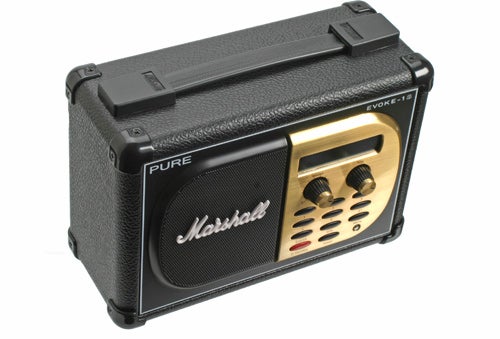 Build quality, though, is not up for debate. Just as the company’s amps are built to survive a life on the road, so the Evoke-1S Marshall is equipped to brush aside all that a kitchen window sill or shed shelf can meter out. Those corner protectors should save this radio from any severe damage from falls, unless you’re unfortunate enough to have it land straight on one of the knobs. Meanwhile the tough yet soft vinyl does a good job of absorbing and disguising any minor knocks, and is wipeclean.

On the underside are four rubber feet that will stop anything scratching the radio and stop the radio from fighting back. As for that rubber handle, it looks and feels identical to those used on full size Marshall Amps, which are quite capable of taking the weight of a 30Kg amp, so this radio’s mere 2.2Kg should cause it no problems.


The only slight let down with regards fit and finish is the plastic control panel section. While the gold sections are brass (hmmm, oxymoronic), the surrounding black sections are plastic. It still looks okay and is by no means something to get hung up on but it’s worth noting. 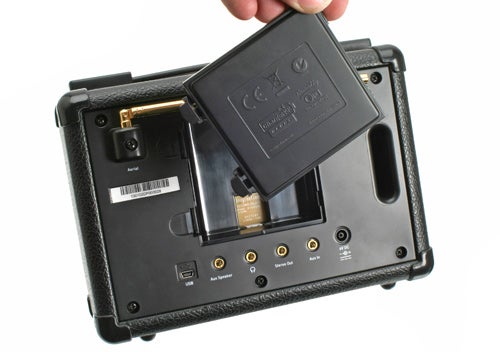 Round the back is the telescopic aerial, the battery compartment and a number of the ports. From left to right there’s a USB socket that can be used to update the devices firmware, an auxiliary speaker output for adding stereo sound via a matching second speaker (the S-1, available for £35), a headphone output, a line-level output, a line-level auxiliary input, and of course power. One annoyance with Pure radios is their use of a proprietary battery pack, rather than just normal AAs or such like. However, the optional battery pack will get you 24 hours of portable listening.


Under all this Marshall clothing sits an otherwise bog standard Pure Evoke-1S DAB radio. So you get the ability to tune into DAB and FM stations with up to 30 station presets shared between the two types. Five of these presets can be accessed directly via the buttons on the front while pressing the 6+ button will bring up a list of the other 25 presets that you can then scroll through.

Alarm, Sleep and Timer modes are also available and you can have either a beep or a radio station come on when the time’s right. Sadly this radio doesn’t include Pure’s selection of real-world sounds for you to also choose from. These include peaceful background noises like whale calls and running water or more alarming tones like pneumatic drills and chainsaws – always useful for a murder themed party! Neither does it have Pure’s clever snooze feature whereby you tap the touch sensitive metal handle to activate this mode.

As well as volume and tuning dials, and the six preset buttons, there are buttons for cycling through source (DAB, FM, Auxiliary input), changing the displayed information, the timer modes, and the Menu. When in menus or cycling through lists, the tuning knob is used to move through your options. In the menu you can access information sent out along with the radio signal; things like what tune’s playing, who’s presenting, etc. There are also options for turning the radio’s power saving features on and off, adjusting the display brightness, retuning the radio, changing language (English, French, German, and setting the clock.


Above the controls sits a yellow on black OLED display with a resolution of 128 x 22 very square pixels. It’s bright, sharp, and incredibly easy to read, no matter what angle you view it from. It also refreshes quickly so can show smooth scrolling text, with none of the judder you sometimes get. 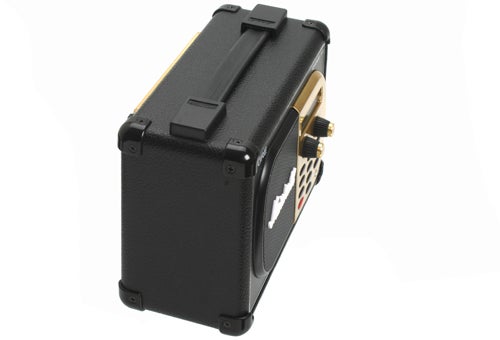 In a nod to rock and roll folk lore (namely Spinal Tap), Pure has made the volume dial turn all the way up to 11, though we’re fairly sure it’s just as loud as 10 on a normal Evoke-1S. Another brand tie-in is that the radio defaults to PlanetRock when turned on, you can however change this to whatever station you like – just change the 1st preset.


All told, it’s a wonderfully easy to use set of controls. Indeed, this is why we’ve praised so highly Pure radios in the past – they are just a joy to use. 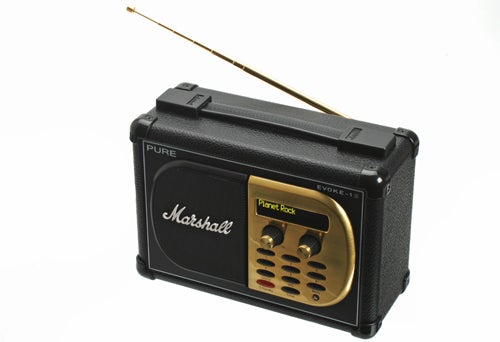 Our enthusiasm isn’t quite so unreserved when it comes to the Pure Evoke-1S Marshall’s sound quality. Overall volume is surprisingly powerful and remains undistorted all the way up to 11 – certainly there’s enough volume on tap to fill most rooms of a modest family home. It also produces a nice full tone, with a surprising amount of bass presence, however the Achilles heel is a slightly muffled sound. It’s fine for most everyday listening but if you throw something challenging and complex at it, the intricacies do get rather lost. Combined with a £30 premium for the Marshall branded version over the standard Evoke-1S and there’s no question this radio doesn’t offer great value. However, that’s not to say we don’t like it or think it’s worth a punt. If you’re willing to take the £30 on the nose as a novelty tax then the radio itself more than justifies its price.


The Pure Evoke-1S Marshall is undoubtedly a novelty gift with styling that is sure to divide opinion. It’s also a tad expensive but if you or someone you know is into their guitars/music, you’re highly likely to be very pleased with the performance you get from it. It’s easy to use, looks great if you’re into that sort of thing, is well built, and sounds pretty decent too, though they could’ve just made 10 louder.