They say that form is temporary but class never stays hidden for long. Others may make DAB radios but none can really make them with the consistency of quality of Pure. Pure is an example of that rare breed, a great British company. A logo on the back of the Tempus-1 S says ‘Powered by Imagination Technologies’, who before moving into DAB, was known for the Videologic brand that produced the classic tile based rendering Kyro graphics chips, as well as sound cards and some excellent speakers. Those, as they say, were the days.


In the here and now though Pure has carved out more than a niche in DAB radios and is the number one in the UK and gorgeous little radios such as the Tempus-1 S are going to do little to change that.


The Tempus-1 is a smaller unit than the Evoke 3 I looked at over 18 months ago and as such is perhaps more suited to a bedroom than it’s larger brother, though it would do an equally fine job in, say, the kitchen. Note that it only has a single 3in speaker, though if you feel as though you want stereo you can add a second designed to match speaker, available separately from the Pure Online shop for £29.99. Also, it doesn’t feature Pure’s ‘Revu’ function, which enables you to pause and rewind radio – for that you’ll need to look at something like Pure’s Élan RV40. 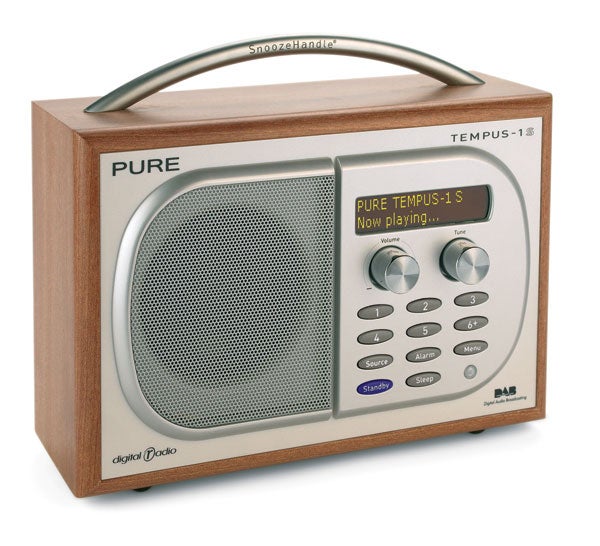 The Tempus-1 has the usual Pure retro look to it with the radio housed in a upmarket looking cherry wood veneer. The array of buttons and the OLED screen, underneath giving it that cool mix of old and new. The OLED display is small but it is probably the best looking readout I’ve ever seen. The high contrast yellow on black lettering is so bright and clear, your eyes are drawn to it, and the viewing angle is just perfect, being completely readable from any angle that you can actually still see the display from. No wonder the large manufacturers want to make TVs using this technology.


Underneath the screen are two dials with a shiny machined silver finish, the left one is a volume control that’s mutes the audio when pressed in, while the right one is for tuning and is used to confirm selections when pressed in. A quick press of the Standby button turns the radio on, notably quicker than the Evoke 3, which at times take a while to react. The first time you power it up, the radio invites you to Autotune, and scans for nearby multiplexes impressively fast. If it stores stations and later the radio is moved and it can’t pick them up, these are indicated by a question mark in front of the station name. The Source button scrolls between DAB, FM, Natural Sounds and Aux.


The FM tuner is there, naturally, as a back up in case you can’t pick up DAB. One issue I found though was that to scroll through the FM frequencies you have to constantly turn the small dial to get anywhere, making tuning into FM stations are real chore. However, if you are using this mainly for FM then really there’s no need to spend £90 on a luxury DAB radio. Also once you have reached your FM station you can programme it into one of the 99 presets, which will happily switch between DAB and FM. There are only five direct buttons on the front. Once you hit the sixth, you can either press the tune button to go to that sixth preset, or spin the right dial to go any of the other presets, a solution that works well.

There are four alarms that you can set from any source, to be daily, weekly, just at the weekend, just on Sunday, just on Saturday or just once. One of those sources includes the aforementioned ‘Natural Sounds’, so if you like the idea of being gently awoken by the sounds of tweeting birds, now’s your chance. The Natural Sounds are, as the name would suggest, sounds of nature and you get, Waves, Bird Sounds, Thunderstorm, Forest Rain and White Noise. If it sounds gimmicky it is, but it can’t be denied that it’s still pretty cool. You can also set the snooze time to be between 5 and 59 minutes, (the latter presumably for students). Snoozing is particularly clever, you just touch the handle at the top – which is neat.


The radio has a couple of nifty features, one of which is called Intellitext. This stores the text information broadcast by many radio stations, containing news or other information, and lets you browse them at your leisure. This can be set to be held for either a day or up to a week. While I thought this might not work so well on the smaller screen it actually works quite nicely. Textscan meanwhile, lets you scroll manually through the text information that’s being broadcast live, as opposed to having to wait for it to scroll slowly across the screen – handy for taking down phone numbers or the name of the track playing – though this is really to make up for the fact that unlike the Evoke-3 the Tempus-1 S can’t fit all the information on its small screen at the same time. 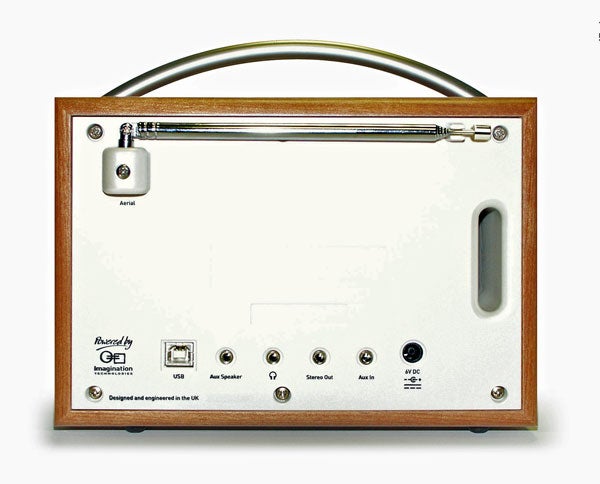 Round the back you’ll find an auxiliary input for connecting other sources, such as an iPod. I tried this out and was disappointed to find that the volume level was low even with the iPod and the radio on full volume. Alongside the Aux-in, is a line-out Stereo output for connection to external stereos and the connector for the extra speaker. There’s a USB port for hooking up to a PC for firmware updates, which echoes the old style meets new technology in this radio.


Those looking to extend their green credentials will like the fact that this radio is an ‘EcoPlus’ product, which according to Pure’s literature means that its designed with the environment in mind, and so is “made from recycled and sustainable sources”, has, “Optimum packaging size for transport efficiency”, and contains a, “selection of components with minimised environmental impact”. Pure also claims that in standby and active mode it uses much less power than rival radios. Being green is very much a saleable point to make these days, but it would be churlish to be too cynical about such moves.


The Tempus-1 S then is great looking, easy to use and great sounding radio- and a green one to boot. Even over the single speaker the sound was smooth and detailed and really made the best of DABs compressed sound. Certainly there are cheaper options that would do a good job but if you’re willing to part with £90 for a radio, you won’t find a finer example than this one.