Pure has a highly enviable history of creating cracking little DAB radios. The British company has been churning them out for years now and has lead the way for design and ease of use the whole time. More recently its ventured further afield with iPod docks and internet radios, with mixed success. The Pure Contour 100Di, however, sees the company getting things spot on once again.

Costing just shy of £100, this compact radio and iPod dock is widely available from high street stores as well as online. 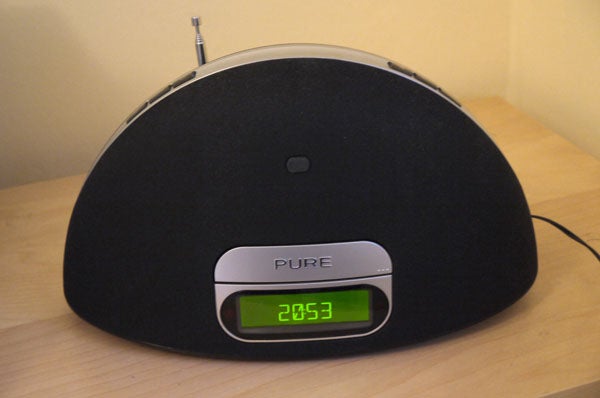 Design and Hardware
The Pure Contour 100Di may look like a number of larger oviform iPod docks, such as the Monitor Audio i-deck 200 https://www.trustedreviews.com/monitor-audio-i-deck-200_Portable-Audio_review  but is in fact a more compact device with dimensions of 174 x 308 x 145mm – ideal for a bedside table or kitchen worktop. It’s relatively lightweight too (2.7Kg), though this isn’t necessarily a good sign for an audio product, where weight tends to correspond to good sound quality.

We like the styling of the Contour 100Di. The squashed hemisphere is finished in black cloth on the front and black plastic on the back with a strip of silver-painted plastic bisecting them. Inset into this strip are the controls, while the front houses a screen and the flip out iPod dock. The look is smart and simple, with a clear appreciation of how to make something look and feel good despite the use of less then premium materials – the metal, wood and glass of £200-£300 docks aren’t present here, with plastic used throughout. 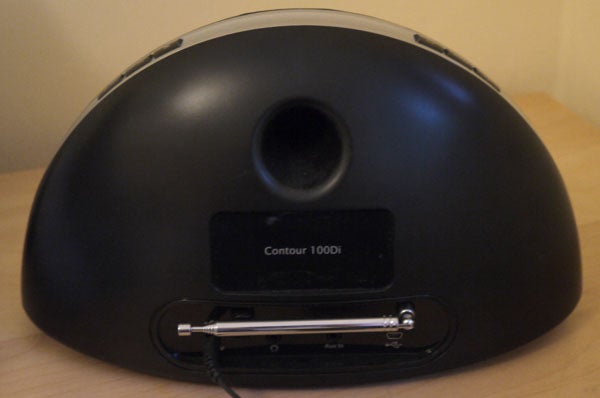 Round the back is a proper telescopic aerial that extends to around 45cm, and folds away into a plastic clip when not needed. Below it are the various connections. On the right is the power socket, a headphone jack, line input jack for plugging in an alternative sound source, and miniUSB port that’s for service purposes (applying firmware upgrades and such) – you shouldn’t need ever use this. Above this lot is the bass port for the speaker.

Turning our attention to the front, it houses the aforementioned screen and iPod dock, above which is a small rubber nubbin which is used to support your iDevices when plugged into the dock. This does mess with the look of the device a little, breaking up the seamless expanse of the black cloth, but it’s not all that noticeable in day to day use.

The dock itself is a work of some ingenuity. Push in the the area marked by the raised dots and the dock folds away into the chassis, leaving a plain silver plate. Press the dots again and the dock flips open. Sadly the mechanism only opens automatically with a simple tap, whereas closing it requires you to push the whole mechanism back inside manually to hide it. It’s a bit awkward to do, so we suspect few people will actually bother ever hiding it away once deployed for the first time, but at least the option’s there. 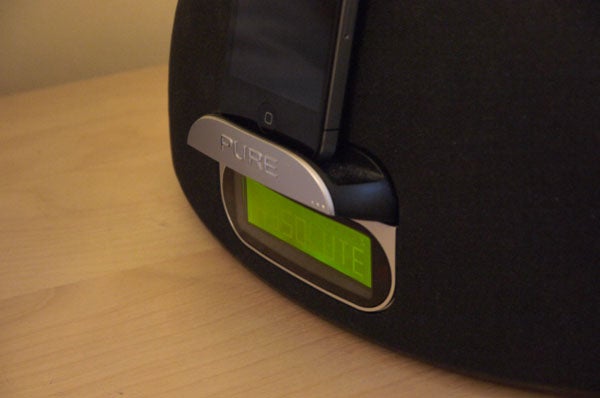 An even nicer touch is that the docking area is wide enough that iPads can be docked, along with all current iPods and iPhones (bar the iPod shuffle), without the need for dock adapters – all the devices are supported by that little rubber nubbin. The dock is rather dwarfed by an iPad but it’s held reasonably secure.

Below the dock sits the monochrome (yellow on black) LCD display, which features seven 14-segment characters and a number of feature specific logos such as the source and signal strength. It’s not the best display we’ve seen, nor even the best Pure display we’ve seen, with contrast dropping dramatically when viewed from an angle. In fact, it does fail our pillow test wherein we found it couldn’t be read when on a bedside table with us resting head-on-pillow. It’s not a disaster, as you should be able to angle the device to better see the display (or sit up to check the time), but it’s a shame you have to. At least the characters are just about large enough to read from across a large room.

Controls and Usability
Just six buttons are used to control the Pure Contour 100Di, with Power, Source and Favourites on the left side of the silver arch, and Mute, Volume Down and Volume Up on the right. All the buttons, while not backlit, are large and easy to feel your way around in the dark, with a nice defined click so you know when you’ve pressed them. With so few of them, it takes little effort to memorise which one’s where – they really are a cinch to use. 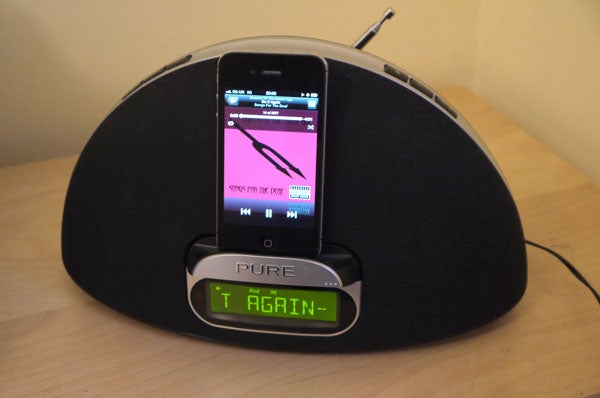 Controlling your iDevice is done purely through the device itself unless you use the remote. Sadly the remote is one of the least accomplished aspects of this device as its little popper buttons are not backlit and are uniformly arranged, so difficult to pick out by feel alone. It works but we can see you seldom using it if used as a bedside radio, and once you’ve set up your fave radio station. One very neat trick is that the remote docks into a magnetic recess on the back so you should never loose it even if used infrequently.

When it comes to radio, you’ve got both DAB and FM, though AM and DAB (which is coming but not yet used in the UK) don’t make it in. You can store up to 20 presets for each type of radio and we found reception to be very good.

Internet radio is also an option if you take advantage of the Pure Lounge app on your iDevice. This provides free access to thousands of internet radio stations, on demand content like podcasts and ambient sounds such as whale song and crickets. You can also download and stream music from the subscription based Pure Music service.

Sound Quality
So the Pure Contour 100Di is stylish and easy to use, but what of how it sounds? Well, it’s not going to blow your socks off. If you’re familiar with other Pure radios like the classic Evoke range then you’ll be familiar with the level of clarity on offer, but what the Contour 100Di adds is a bit more wollop. There’s a fuller bass sound and slightly more expansive sound stage thanks to its stereo speakers. We’re not talking Hi-Fi by any stretch, with even the mono Vita Audio R1 giving it a thorough spanking, but in isolation it delivers what feels like a satisfying full sound that’s at home playing rock and pop as it is spoken word on Radio 4. Certainly for the money, we can think of few devices that offer this range of features and markedly better sound quality.

What we particularly like is how well it works at low volume, giving a pleasing sound at night-time listening levels. You can also adjust the volume in fine increments, allowing you to get just the right setting so as to, say, not keep you awake but still give you a satisfying listen when nodding off.

The downside is that it doesn’t really excel at high volumes. It doesn’t distort or sound outright bad but simply lacks the bass and general scope to fill a room to party listening levels.

In fact, just before we sum up, this touches on something we’ve felt for a little while with Pure’s products. While largely excellent for the money, we’d really like to see a more premium range providing better build and sound. In the case of this Contour 100Di, if you could get a version that had an OLED display, metal strips in place of the silver plastic and a slightly fuller sound that’s edging towards the premium iPod dock level, for say £200, we’d go crazy for it. Instead, the Contour 100Di, great as it is, leaves us wanting just that bit more. 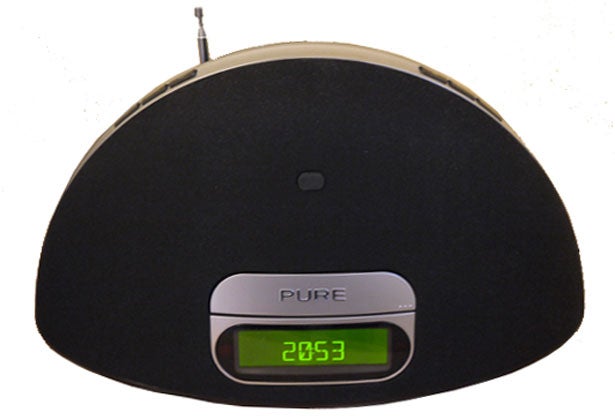