There’s no way around it: Puppeteer is a beautiful-looking game. It is a platformer styled as a fantasy puppet show in a magical theatre of illusions, it frames everything with red curtains, and every major beat of the action is met by the gasps and whoops of an unseen audience.

Every set, all the scenery, and every character, creature and prop seems to have been intricately sculpted out of painted wood and string, and the different levels revolve, rotate and slam into place with the aid of crunching gears and off-stage pulleys. 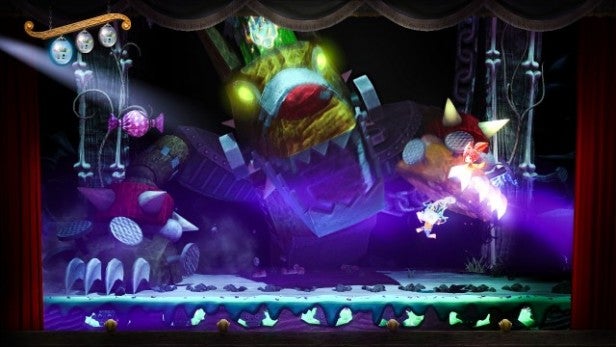 It’s not just about technical achievements, but about the level and character design – a sweet blend of European folk tale and Japanese style – and the ingenious staging and lighting. Play Puppeteer on the biggest screen you can find and turn the sound up too. The orchestral score is brilliant, and it will soon put paid to any ideas you might have that a 2D platform game can’t work as spectacle. 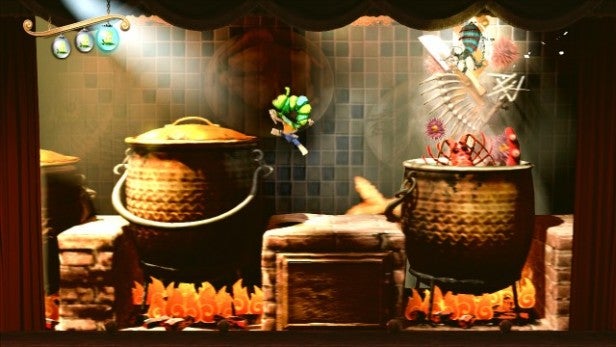 In gameplay terms, sadly, Puppeteer doesn’t shine so brightly. It’s not that it’s short of innovation, either. The premise is that a fiendish Moon Bear has usurped the place of the goddess of the moon, and – not content with lunar tyranny – he’s kidnapping the souls of children and transforming them into puppet slaves.

You are one such slave, but with the aid of a witch and an odd flying cat you escape your bonds, steal a magic pair of scissors, and embark on a quest to end the Moon Bear’s reign once and for all.

To help, you have a range of tools at your disposal. Firstly, your hero in Puppeteer comes into play without a head; an unfortunate fact he turns to his advantage by adopting heads dropped and discovered around the levels.

Secondly, he gets the scissors, which come into play as a handy, snap-happy weapon, but also provide a means of locomotion. 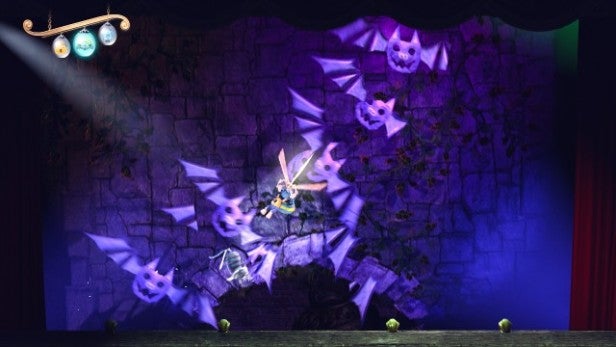 Certain parts of the scenery in Puppeteer – cloth, leaves, banners, sails, clouds – can be snipped into bits, and while you’re snipping you’re carried along the object in question. What’s more, you’ll find the occasional seam, which you can snip along at an extra burst of speed. While all the button tapping this involves gets pretty wearing on the thumb, it’s probably the game’s most interesting gameplay twist.

Making progress through the game you’ll also find items that unlock more powers, namely a shield that can reflect enemy attacks, bombs that can be thrown or dropped in place, and a hook you can use to grapple objects and drag them into place.

Throw in a right-stick controlled companion who can ferret out secrets hidden on the screen, and you have a pretty good repertoire of skills. The latter can even be controlled by another player, either with the standard Dual Shock 3 or PlayStation Move.

The heads, for example, are almost entirely wasted. You can only use a specific head at specific points, and their use is rarely fundamental to the level. Instead, they are used more like lives – get hit and you drop your current head and have to grab it before it disappears. This is a nice idea, but it means that  much of the time you’ll arrive at the magic spot to use a head without the right noggin in your possession. 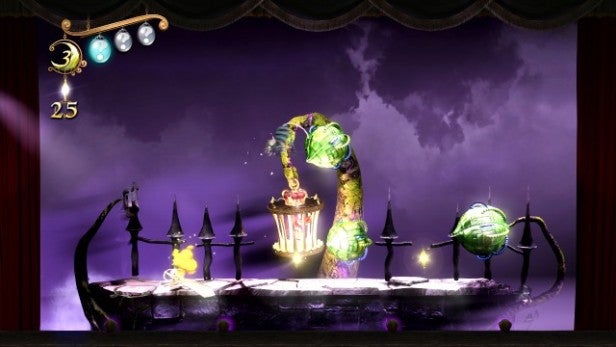 The scissors, bombs, shield and hook are more gainfully employed, but once you look beyond the visual level – where there’s almost a surfeit of imagination – these tools are never used in any interesting or unexpected way. And that really is the major fault of Puppeteer.

Beneath the razzle-dazzle of the style, the substance is of a 2D platformer of the late nineties. The characters are beautifully drawn and the settings, whether the surface of a speeding giant snake or a floundering pirate ship, are extraordinary. But what you’re actually doing with them and in them isn’t quite so inspired.

The odd boss battle aside, Puppeteer isn’t a particularly difficult game, and in that respect it’s a good game to play with kids, particularly if you can play the supporting role and take over for the tricky bits.

The controls could be slightly tighter and more responsive, and there’s a nasty tendency to fall down unassuming gaps. But neither flaw is so extreme as to wreck the game. What threatens to at times is the endless storytelling. We like the story and we like the fine voicework from a mostly British cast and the witty script.

What we don’t like are the endless cut-scenes that punctuate the action and introduce every segment. Just when you’re into the action, they drag you back out. We’ll admit to skipping more and more as the game went on. 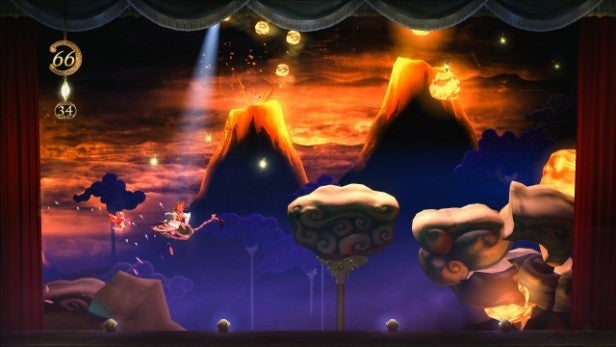 The big question with Puppeteer is this: are you willing to push through a reasonably entertaining but slightly mediocre platform game in order to enjoy the ingenuity and beauty of its visuals?

What’s more, are you willing to pay around £25 for the privilege? for many PS3 owners, and with the superior Rayman Legends only just released, the answer is going to be no, and we suspect Puppeteer would have gone down much better as a £10 to £15 PSN release. Yet there is something about that style that’s almost impossible to resist. It doesn’t play as good as it looks, but is that such a disaster when it looks so damn good?

Check out our best games round-up

There’s more to Puppeteer than a triumph of style over substance, but it’s a shame that the style is so extraordinary when the substance is, well, so ordinary. It’s a fun run-and-jump platformer with a handful of brilliant ideas, but not all are executed or explored to their full potential. Enjoy it for its visual marvels and sense of magic, but be prepared to be left wishing it was something more.