The Puma Smartwatch has the company DNA running all the way through it. It’s just a shame then that its attractive, sporty look doesn't have the hardware and software to match.

The sports apparel giant with the big cat logo is experiencing a bit of a revival at the moment. Now it’s hoping the decision to dip its toes into the world of smartwatches with the Puma Smartwatch can help the company cash in on those who want a connected watch, but don’t fancy an Apple Watch 5.

It’s getting some help to make that happen having signed a long-term partnership with Fossil Group, which already has a veritable army of smartwatches to its name.

The fashion giant might be better known for its dressy Wear OS watches, but it has recently flexed its muscles into the sports realm with the Fossil Sport. The company’s Gen 5 smartwatch collection, which has been rolling out over the past few months, also displays a more “active” look.

The Puma Smartwatch is a culmination of what Fossil has managed to deliver with its existing smartwatches, leaning on Google’s Wear OS to run the software show, all while throwing in a few of its own extras.

While this is Puma’s smartwatch debut, the brand has been selling “dumb” watches for a while now. So it’s no surprise to see that it has leant on the look of those existing timepieces sans smarts. It’s unashamedly sporty, and is built to worn in the gym or out on a run. A waterproof rating means it’s also suitable wearing for a dip in the pool, offering swim tracking capabilities to make the most of those sessions in the water.

Size-wise, you’re getting a 44mm, fully round watch that’s held in place on your wrist via an interchangeable silicone watch strap. We experienced no irritation from the flexible band, and found it comfortable to wear day and night – and during sweaty gym sessions.

At the rear of the watch you’ll find an aluminium case, while up-front, surrounding the full touchscreen display, is an eye-catching metallic bezel that reminds us a lot of the Fossil Sport. What separates the Puma from the Sport is the fact you’re getting fewer physical buttons here. Puma opts for just a solitary crown that you can twist to scroll through notifications and menu screens, or press and hold to launch Google Assistant.

The Puma measures in at 11mm thick, so it certainly isn’t a chunky watch by any stretch of the imagination. It sits light on the wrist, so if you like your smartwatches slender then the Puma Smartwatch will appeal. 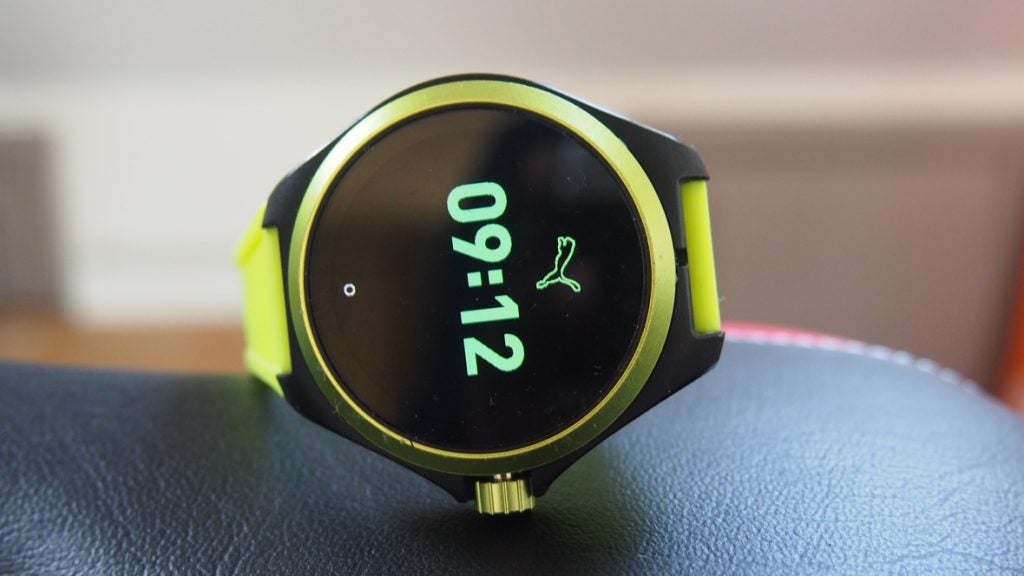 The Puma Smartwatch is available in black, rose gold and yellow. We were definitely happy with the yellow unit we were testing – which is actually more neon than your standard primary yellow.

The Puma Smartwatch comes packing a 1.19in AMOLED touchscreen display that offers a pixel density of 328ppi. In terms of screen estate, that puts it in line with numerous other Wear OS watches out there. Thankfully, it’s a fully round display with no flat-tyre in sight.

We’d consider Apple and Samsung’s smartwatch displays to be the best in the business. While the panel here isn’t class-leading on the screen quality front, we don’t have any complaints. It’s a good-quality touchscreen with strong brightness, even when not set at the maximum level. Colours are rich and contrast levels impress, too, making the smartwatch viewing experience a good one.

Screen visibility is decent and there’s even a Sunlight boost option in the watch settings that provides a temporary boost in direct sunlight, if you think you need it.

It’s no big surprise to find that Puma hasn’t decided to build its own operating system, especially considering it’s partnered up with Fossil for this smartwatch. What you’re getting is the very latest version of Google’s Wear OS.

This means pretty much everything you’d expect from a Wear OS-running smartwatch. You can receive notifications, get access to Google Assistant, load up music using Google Play, and can pay for items via Google Pay. There is a microphone, but there isn’t a speaker, so you don’t have the ability to take calls like you can on some newer Wear watches.

Puma does make its presence felt on the software front to some degree, through preloaded watch faces and a couple of apps. There are only a handful of Puma-branded customisable watch faces to choose from, however. Scorecard is certainly the standout one, offering an attractive place to tell the time when you wake up the watch and in standby mode. It’s just a shame that Puma didn’t offer more of its own.

In terms of app additions to the usual array of Wear OS selection, there’s a Saved Looks app where you can view and select your own customised watch faces. It’s something we’ve seen crop up on a lot of Fossil-built smartwatches. The more interesting addition is PumaTrac, a fitness focused extra that’s essentially an alternative place to track indoor and outdoor runs. 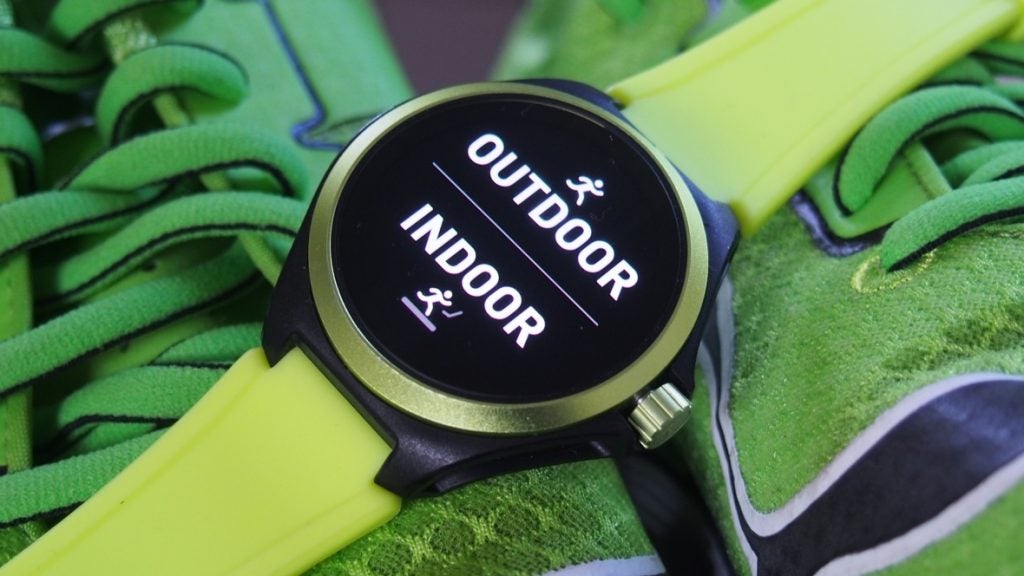 There’s also a PumaTrac experience off the watch that offers the ability to build training plans, and to download workouts that you can follow in the app. Disappointingly, this experience remains on-app, with no integration into the watch in any way. The ability to follow these workouts from your wrist would have been a nice touch.

Has Wear OS on a Puma smartwatch changed our feelings about the operating system as a whole? Not really. It’s largely more of what we’ve seen before. Things simply don’t feel as slick or polished as they do on rival operating systems. The Puma extras don’t bring anything groundbreaking to the party, and Google just feels like it lacks something to make you really love how it goes about its business.

Puma is well known in the sporting realm, so it’s no surprise to see that we’re getting the full range of fitness features here. You have built-in GPS for tracking outdoor activities, a heart rate monitor for measuring effort levels during workouts and, of course, a waterproof design so you can take it for a swim.

Out of the box, you’re relying on Google Fit to offer a place to store, view and track workouts. This takes the form of two apps: Google Fit and Google Fit Workout. There’s also Google Fit Breathe, which offers guided breathing exercises similar to those proposed by Apple, Samsung and Garmin.

Of course, you also have the option to tap into third-party apps if you’re already using something to track your workouts and want to continue doing so. If you do take the Google Fit route, then what you’ll find is a very clunky approach to unifying your health and fitness data. The experience is certainly better on a smartphone than it is on a watch right now, that’s for sure. Yes, the Google Fit watch face that displays your Move and Heart Points looks great, but for tracking workouts and viewing data, it isn’t the most intuitive.

We put the GPS to the test for a bunch of runs; however, we ran into issues. The first problem is getting the watch to stop trying to piggyback off your phone’s GPS. It clearly does that as a measure to improve accuracy, but it should be far easier to stop that instant connection, especially when most people will track with their phones nearby and not want to use the phone GPS. When we did finally manage to do this, accuracy next to a dedicated running watch came up short. As a result, it delivered inaccuracies with other run metrics.

In a more extreme test of the Puma Smartwatch’s ability of functioning as a running watch, we ran a marathon with a running watch on the other wrist. While accuracy seemed to be largely in line with the running watch during most of the race, we don’t have the data to show for it because the Puma’s battery died before the end without saving any of the data. 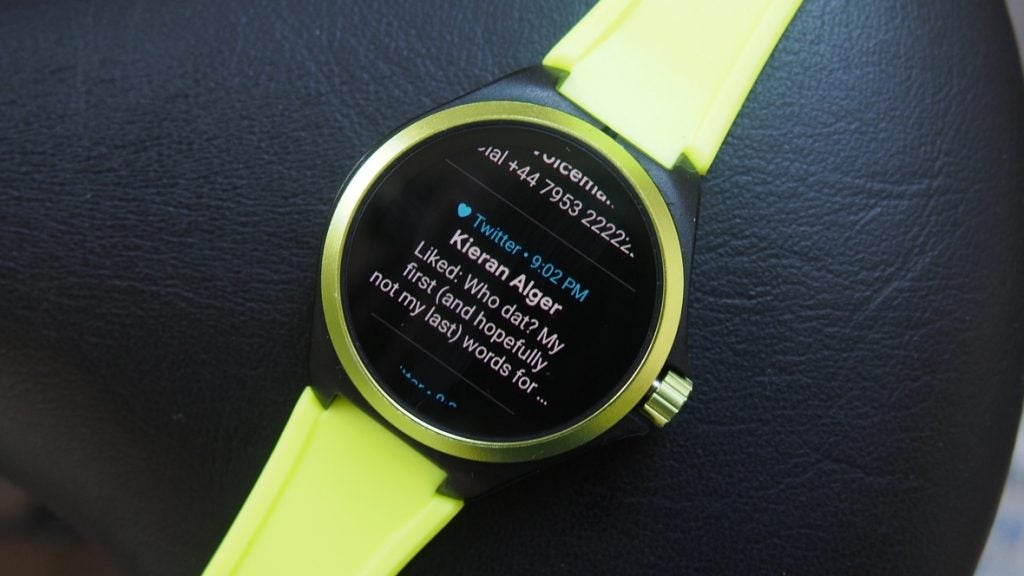 The performance of the heart rate monitor isn’t really much to write home about, either. In an interval indoor rowing session for instance, it struggled to keep up with the quick spikes and drops in heart rate compared to a heart rate monitor chest strap as the screenshot above shows. If you’re buying this watch for its sports tracking, we think you’re likely to be disappointed.

Keeping the Puma Smartwatch running smoothly is a mix of old and new hardware. The new is Qualcomm’s latest Snapdragon Wear 3100 processor. The old is the 512MB of RAM accompanied by 4GB of storage. That’s the kind of RAM and storage combo we’ve been seeing on Wear OS smartwatches for years – even going as far back as the Android Wear days.

As a result, you get far from buttery-smooth performance here. There’s noticeable lag when you’re swiping through watch screens, with the sluggishness even more noticeable when trying to launch apps. For example, the PumaTrac app  seems to take a mini-age to open, just to be able to do something as simple as log a run.

Puma isn’t breaking new ground on the battery life front, either. You can expect a pretty standard 1-2 days of battery life, which is the norm for Wear OS smartwatches. Based on our time, you’ll comfortably get a day plus a few hours the following day. Bottom line: you’re going to need to charge it every night. 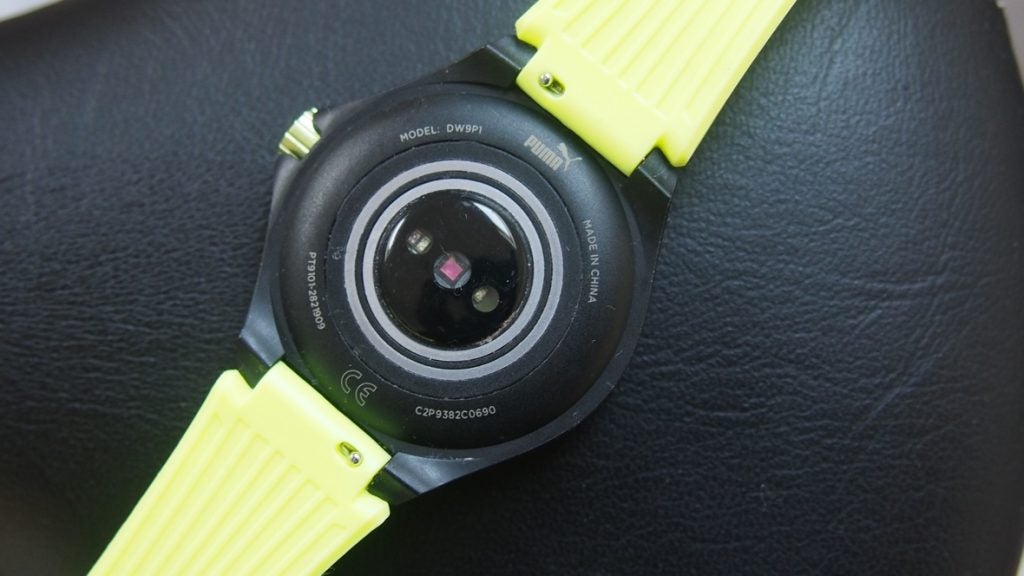 On a day where we didn’t use any of the sports-tracking features, it tended to hit the 40% battery mark at around 11pm. When the battery is running low, it automatically jumps into battery-saver mode – and that means all features aside from telling the time are off-limits.

Tracking a workout has a notable impact on battery life. A 20-minute workout using the heart rate sensor knocked just over 10% off the battery. For an hour’s run, using the onboard GPS, the watch saw a 30% hit. One positive is that it’s at least a speedy charger, getting you from 0-100% in just over an hour.

Should you buy the Puma Smartwatch?

Buy the Puma Smartwatch if you really like the look of Puma watches and yearn for that extra functionality beyond telling the time.

As a smartwatch, it does a solid job. As a sports watch, you’d be better off opting for the similarly priced Garmin or Polar. You can get a lot of the same smart features and more reliable health and fitness tracking.

Unfortunately, Google’s Wear OS still has its annoying quirks and, combined with low-powered hardware, is the Achilles’ heel in this otherwise decent first effort from Puma.