Imagine living in a world where your mood is constantly monitored; the world, clothes and people surrounding you manufactured to suit your own idealistic expectations. The class system we once knew is no more, replaced by a society that’s equal, happy and prosperous.

This is exactly the kind of disturbing future Psycho-Pass presents, putting you in the shoes of an inspector responsible for apprehending criminals for acts they’ve yet to commit. Working alongside enforcers – former criminals who find themselves in a bleak world of blunt morality and feigned perfection.

Psycho-Pass is a mostly thrilling cyberpunk adventure, lined with compelling characters and startling plot developments. Having said that, it doesn’t give the finest first impression, boring me with endless dialogue boxes and unending exposition. 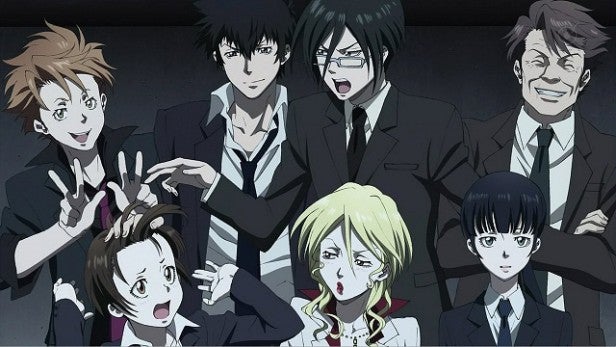 The world and terms I found myself learning were overwhelming, but soon formed into a thrilling and believable cyberpunk locale. The second things begin, you choose from one of two characters. A tall handsome lad or a stone-hearted lady; I went for the latter, since I’m all business.

Mandatory Happiness adheres to your typical visual novel formula, which means it’s an interactive story, with your decisions reflecting upon the unfolding story and relationships with each character. Since this is inspired by anime, of course the protagonist has amnesia, missing memories of her past that are slowly pieced together as you navigate cases and come to terms with your own existence.

It’s a surprisingly compelling character arc, acting as a fitting parallel to the mysterious utopian world you uncover and dissect as the plot progresses.

While many of the characters you befriend in Mandatory Happiness stick to a handful of predictable anime archetypes, they prove to be both relatable and charming. The main cast is comprised of “inspectors” and “enforcers”, both former criminals working for an agency that has the responsibility of preventing crime and maintaining the status quo. 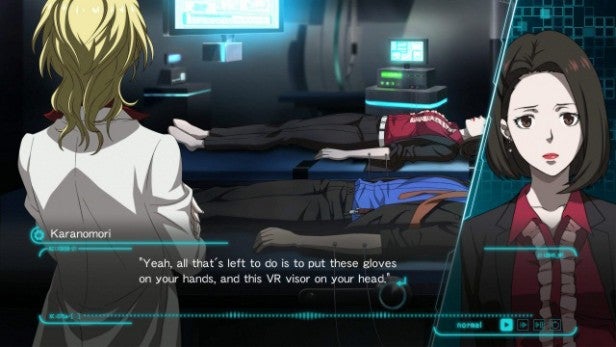 Due to the complicated past of each character, their individual arcs prove to be impressively comprehensive, filled with personal issues that interconnect effectively with the wider themes of Psycho-Pass. In a world where your mood is constantly suppressed, how can you be unique, find love or pursue ambitions? The morality of such dilemmas aren’t exactly original, but feel imbued with enough stylistic anime charm to maintain intrigue.

I’ve played through a decent selection of visual novels in the past, and Psycho-Pass is particularly heavy on the decision-making. For a genre that mostly involves pressing one button for the entire game, this is a welcome advancement.

There’s a huge range of choices available throughout, presenting personal and tense situations to resolve. At times it can be unclear exactly what these decisions could mean in the long-term, making repeat playthroughs for additional arcs and character moments a frustrating ordeal. That said, there’s plenty of variety in Psycho-Pass, with its Blade Runner-inspired characters and set acting as a wonderful backdrop to this bleak yet occasionally heartwarming adventure.

Speaking of Blade Runner, the primary antagonist is a rogue android who hopes to bring eternal happiness to the population of Japan. Its base intentions are good, but his mind is warped, twisted and arguably homicidal. In the world of Psycho-Pass, the mood of the populace is controlled by mental supplements, ensuring they remain calm and level-headed, fulfilling their respective roles for Sibyl – the game’s equivalent to 1984’s Big Brother.

The aforementioned rogue android wants to throw a wrench in the wheels of society, twisting this utopian world into one without order and tranquility. It’s a powerful if unsubtle concept that questions our morality, asking how important order and technology are to our everyday lives and how we might cope without them.

Psycho-Pass is filled with fantastic moments that play on these ideas, throwing me into scenarios with absolutely heart-wrenching decisions to make, purposely asking me whether or not my actions are right or wrong.

Related: PS4 Pro vs PS4 – How does Sony’s new console stack up? 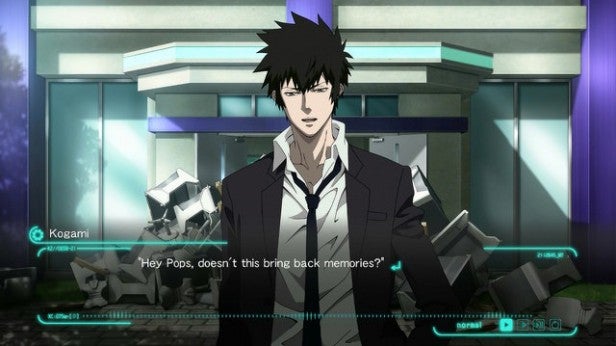 One particular scene had me tracking down an abusive parent, clutching her newborn son to her breast in delusional desperation. According to the system, she was a criminal, and had to be dealt with. I did what I was told, pulling the trigger and splattering her guts all over the wall. This made me feel sick to my stomach, but then I was told the baby was also seen as a “latent criminal”, with no hope of living in our twisted utopia.

Is it right to kill such a small child, or subject it to a life of inevitable crime and ridicule? These narrative crescendos are powerful and frequent, providing Mandatory Happiness with a distinctive feeling of poignancy.

Fortunately, it isn’t all doom and gloom. There are a handful of sweet moments peppered throughout the overwhelming bleakness. Despite the weird world I occupied, I’m still a human being with my own independent thoughts and beliefs. 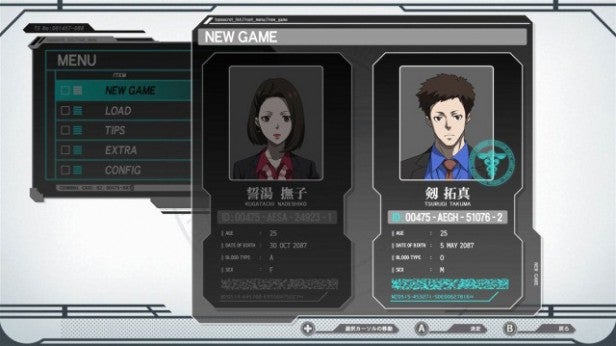 Following a particularly harrowing case, a colleague asks to go shopping, and despite my reluctance, I went along. She was delighted, darting through shops for new clothes and accessories, springing them on me without a second thought. My character was unusually professional for a while, until a long, flowing purple dress is thrust upon her. She’s taken aback, unaware she was capable of exerting such beauty beyond her strict amnesiac demeanor. This was, for a lack of a better word, absolutely adorable; a reminder that humanity will always prevail in the bleakest of circumstances.

Psycho-Pass: Mandatory Happiness is an enjoyable cyberpunk adventure with an excellent setting and cast of characters that are worth caring about. It doesn’t quite stretch its storytelling muscles as far as it could, confined by the traditional visual novel formula in ways that feel detrimental to the overall narrative.

Despite this, the world is compelling, original and thought-provoking at times. If you’re a fan of Danganronpa or Persona, Psycho-Pass: Mandatory Happiness could be next on your wishlist.