These PSB M4U 8 compete, and sometimes beat, the big names for sound – but comfort could be better

PSB is a hi-fi brand with 40 years’ heritage. While you may not have heard of the company – PSB isn’t as big as KEF or Denon – the sound quality of its speakers have helped the brand spread across the world.

The PSB M4U 8 are full-size headphones with Bluetooth and active noise cancellation. They cost £299, making them direct competition for the rather fabulous Bose QuietComfort 35 II and Sony WH-1000MX3.

These PSBs can’t match either for comfort or noise cancellation, but they sound great as long as you’re happy with a little bonus mid-bass. Although this is the kind of characteristic many reviewers highlight as a negative, but many buyers actually enjoy. 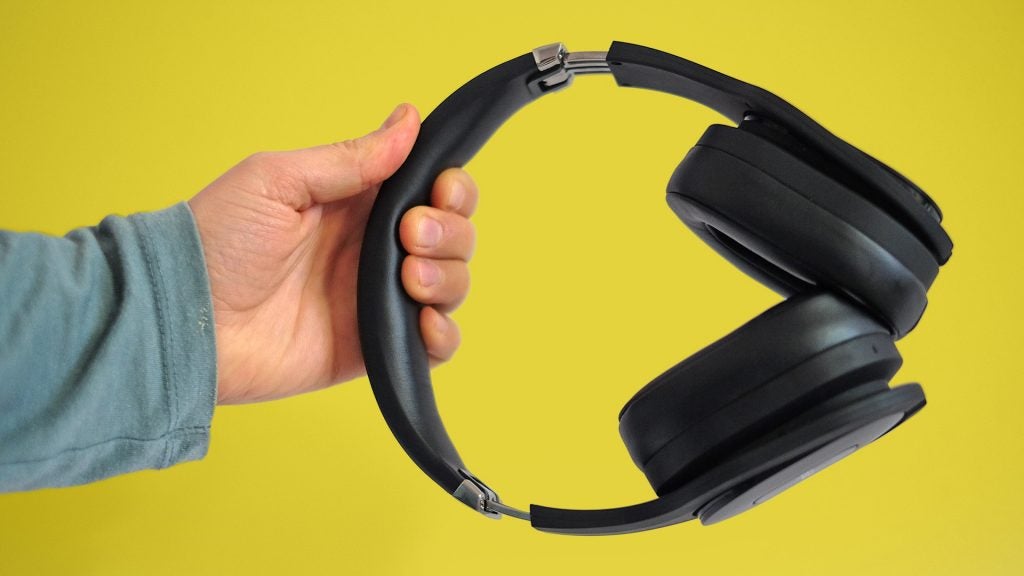 The PSB M4U 8 are large, ordinary-looking headphones. They don’t have the overt street style of the rival Sony pairs, and I’m left clutching at words to describe them without going with “normal headphones”.

There are a few neat touches to separate from the cheaply – but often, adeptly – made Chinese-branded headphones from Taotronics, for example. The PSB M4U 8 have oval cups rather than round ones, and come across as a less sophisticated version of Oppo’s brilliant-but-discontinued PM-3.

Wide and chunky, the headband sticks fairly close to your head. I must have worn hundreds of pairs of headphones over 10 years of reviewing, and nothing makes me feel self-conscious quite like a headband that looks like it’s trying to pick up an FM radio signal. 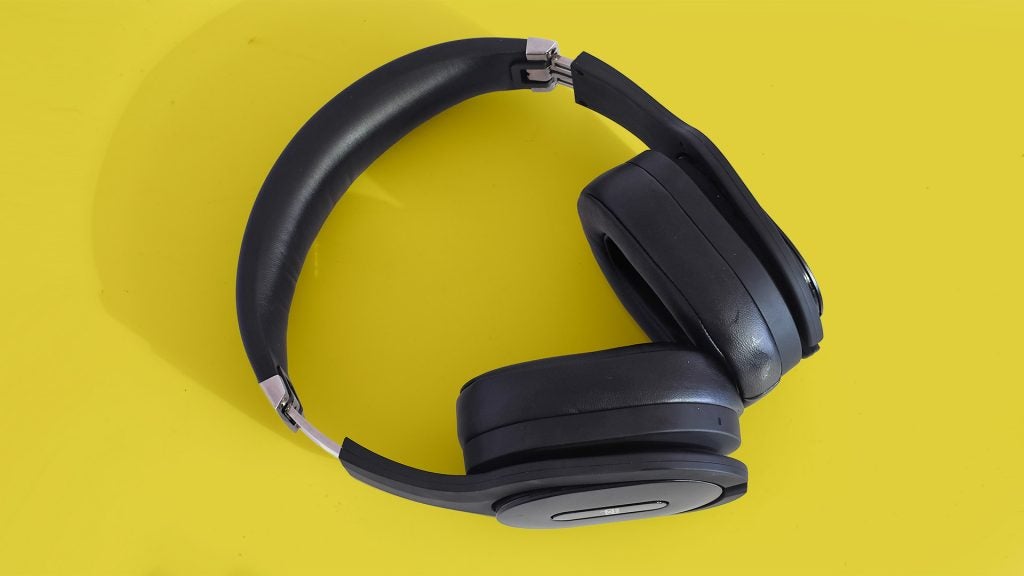 PSB puts in some wasted effort, though. The PSB M4U 8 have metal outer cup caps, but you’re unlikely to notice because of the ring of plastic surrounds them. I’d assumed the cup rears were plastic, until I sat down to write up this review. Aluminium is largely wasted unless you can see it clearly, or are likely to feel it directly.

If you like the look then this won’t matter – but the PSB M4U 8 headband is the one significant design issue. 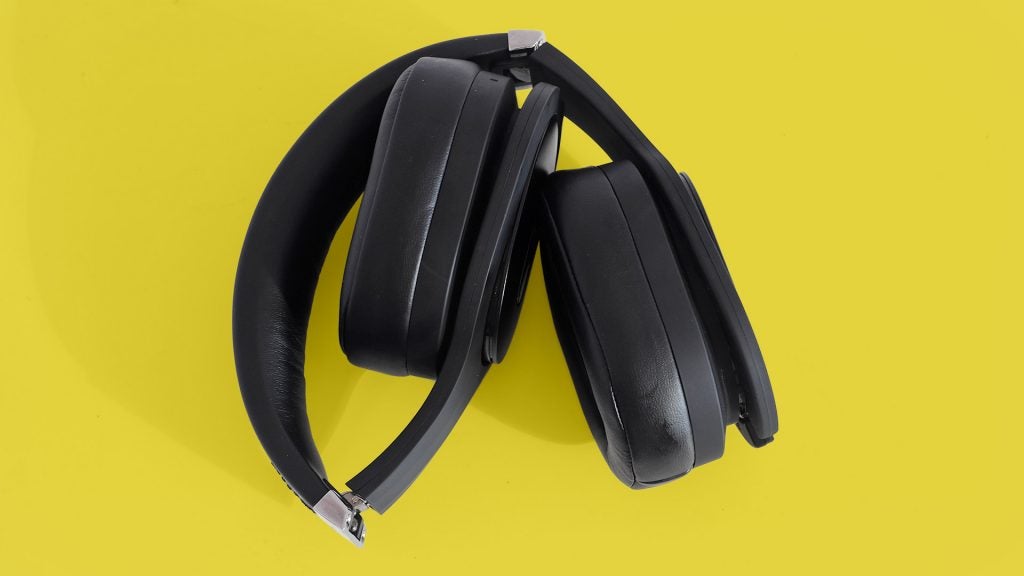 These headphones can fold up, but aren’t small

Apparently, the M4U 8’s head-grabbing pressure was too great at one point, which PSB reportedly resolved. But I find these headphones aren’t hugely comfortable for long periods. The pressure of the pads compresses against your ear cartilage, causing discomfort after a while. The headband’s pressure can make a spot on the top of your head ache after an hour or so.

Play with the headband setting and you can tweak the pressure balance a little, but next to the Sennheiser Momentum 2.0 Wireless and Bose Quietcomfort 35 II, the PSB M4U 8 aren’t particularly comfortable for all-day listening. You wouldn’t guess this to look at them, though; the padding is thick all-round. 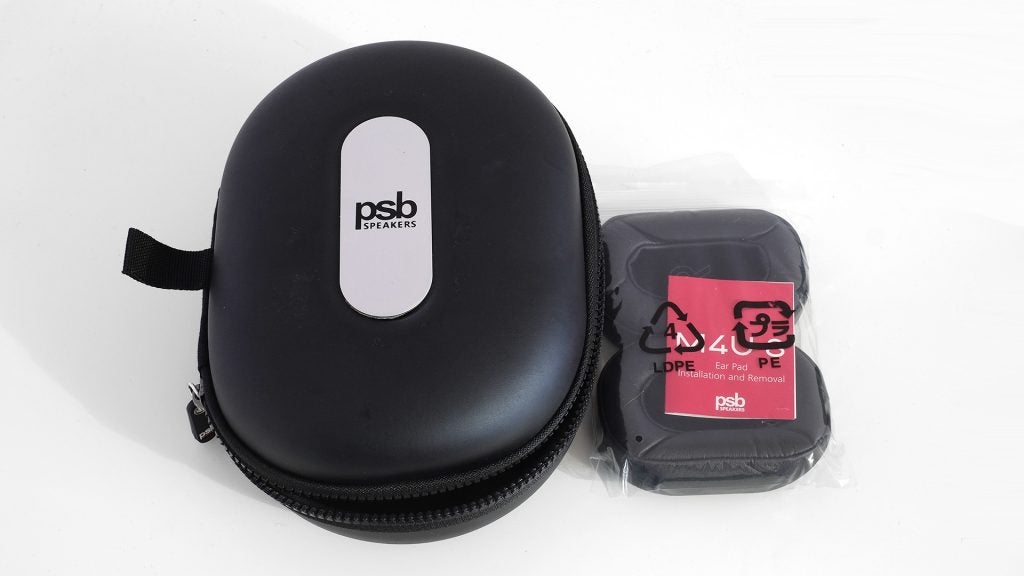 Accessories include a semi-hard carry case and extra pads

The PSB approach to features and tech is typical of a nerdier audio brand. There’s no attempt to hide the controls, but the tech inside is solid.

These headphones offer aptX HD, a Bluetooth standard that lets you stream at 24-bit quality (and a high bit-rate), leaving virtually no perceptible difference between wired and wireless listening quality. They have active noise cancellation, too. 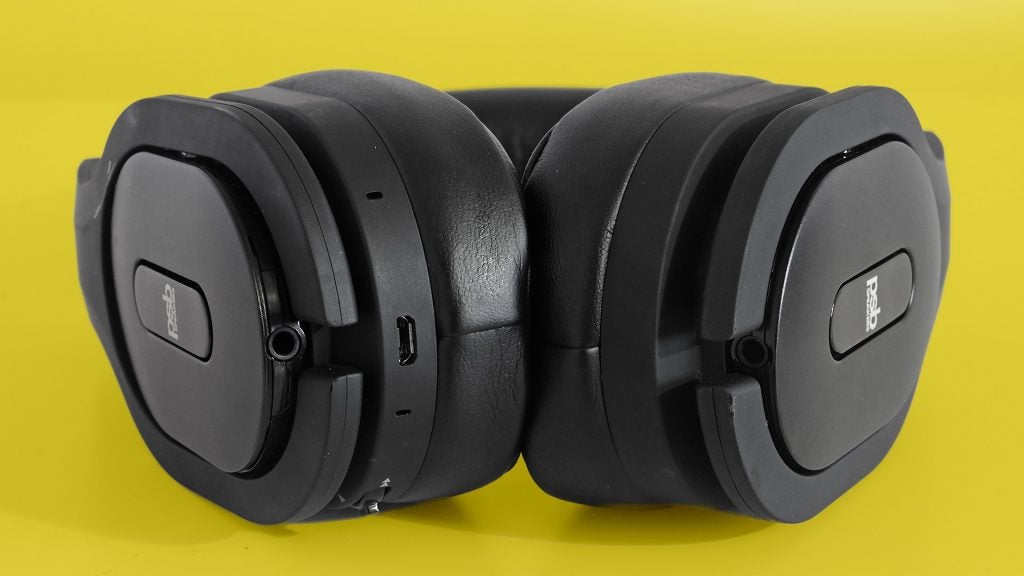 It isn’t as effective as Sony’s, or Bose’s. You don’t get the sense of disconnection from the auditory stress of the outside world, but it does take the weight out of engine noise, to make it easier for your music to compete.

The PSB M4U 8 also rely on passive isolation. A relatively firm headband allows the pads to form a decent seal with the side of your head.

These headphones want to be powered, as the drivers are designed to use the amp circuitry, not just the feed from your phone. A three-way switch on the side of one cup turns them on/off, and enables ANC. Two joystick flicker controls to each side alter volume and control track playback.

There are no gestures to worry about, no touch-sensitive surfaces. No messing about. 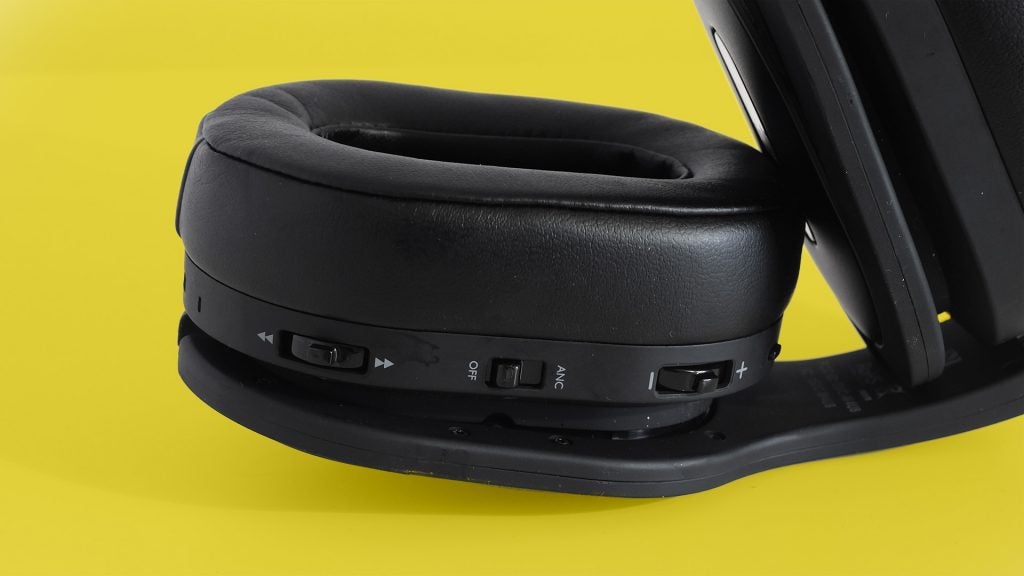 Battery life is only passable. PSB says the M4U 8 last up to 15 hours between charges, which is below the 20 hours of the Bose QuietComfort 35 II and 30 hours of the Sony WH-1000MX3. This review set’s battery also failed during testing, lasting just a minute or two before switching off. I’ll put this down to bad luck.

However, this battery is unusual. Pull off the left ear cup cap and you’ll find two rechargeable 750mAh AAA batteries. Replace these unremarkable GP NiMH units with a pair of Eneloops or Duracell Recharge Ultra batteries and you should see better charge retention (and possibly better longevity).

Note that there’s no “auto off” feature here, though. You have to remember to flick that switch. 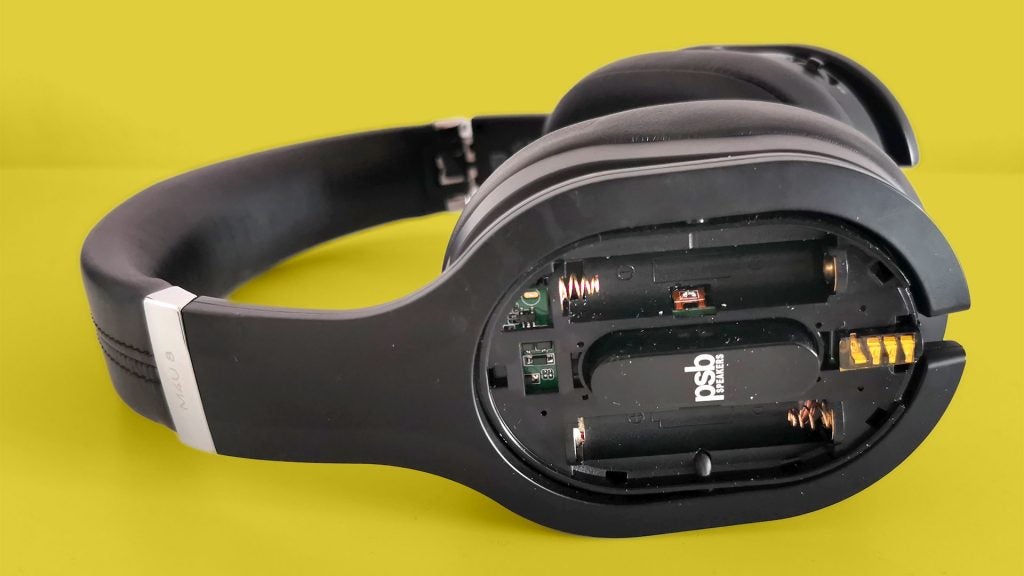 The PSB M4U 8 are among the best-sounding Bluetooth headphones out there. They’re dynamic, punchy, deliver deep but controlled bass and smooth treble.

PSB has crafted a sound signature that makes your music vivid and exciting, without leaning on very heavy bass, or fatiguing treble that screams for attention. It’s a perfect mix of class and enjoyment that should keep just about every kind of listener happy. 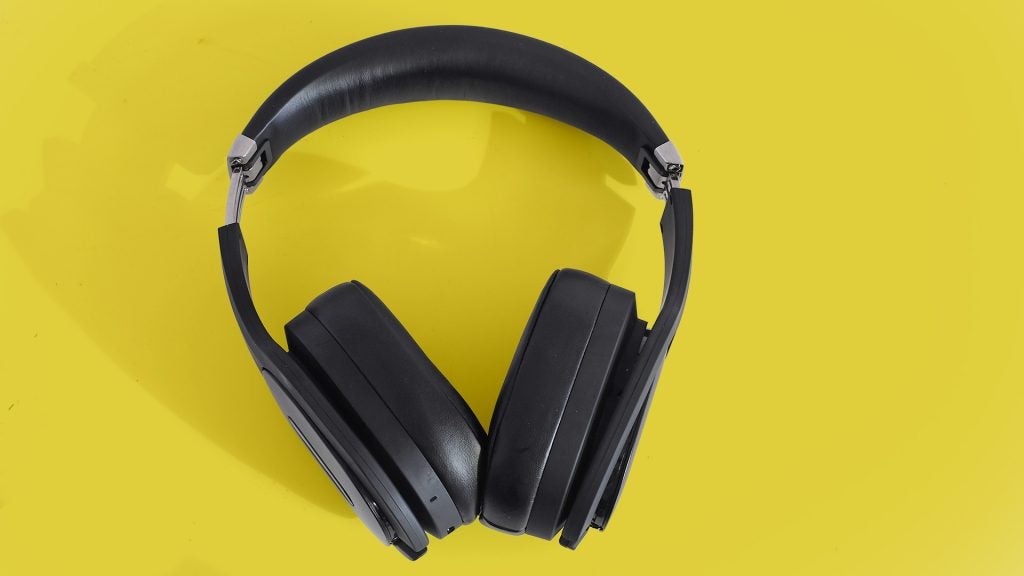 You only get this when the PSB M4U 8 are powered, though. Switch them off and the sound deflates significantly; dynamics sag and treble loses much of its energy. You can still hear evidence of the high-quality drivers in the texture of certain parts, but since much of their charming energy evaporates, you need to listen to the M4U 8 switched on.

This is in part down to PSB’s RoomFeel. It features audio processing designed to give the M4U 8 some of the sound characteristics of PSB’s hi-fi speakers.

Are they perfect when used powered? Not quite.

I often listen to the Oppo PM-3 as a reminder of what a £300 headphone aiming for neutrality can sound like. These headphones are less neutral than that pair.

The PSB M4U 8 have more hyped bass than you might expect. It adds to the energy and excitement, but steers them from neutrality. 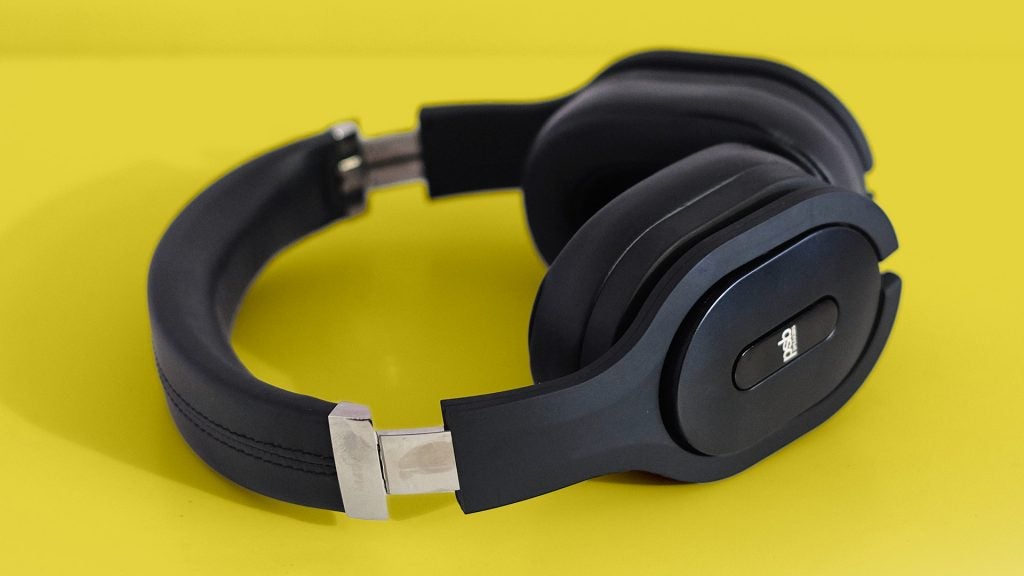 Treble is slightly tame – it’s smooth and well-textured – but fans of bright headphones may find they lack zesty bite slightly.

Also, the one part I see as an issue – the element that can’t be put down to sound character choices – is the mid-bass. It’s a little clouded, a little too rich to avoid negative knock-on effects to the PSB M4U 8’s dynamics and stereo separation. You can hear this in deeper vocals. The lower frequency content of them favours weight and richness over texture and definition, which stands out against the better-defined upper-mids.

You should take these issues seriously if you’re looking for a hi-fi headphone rather than a portable one. But when contending with outside noise, the energetic and engaging presentation stands out far more. 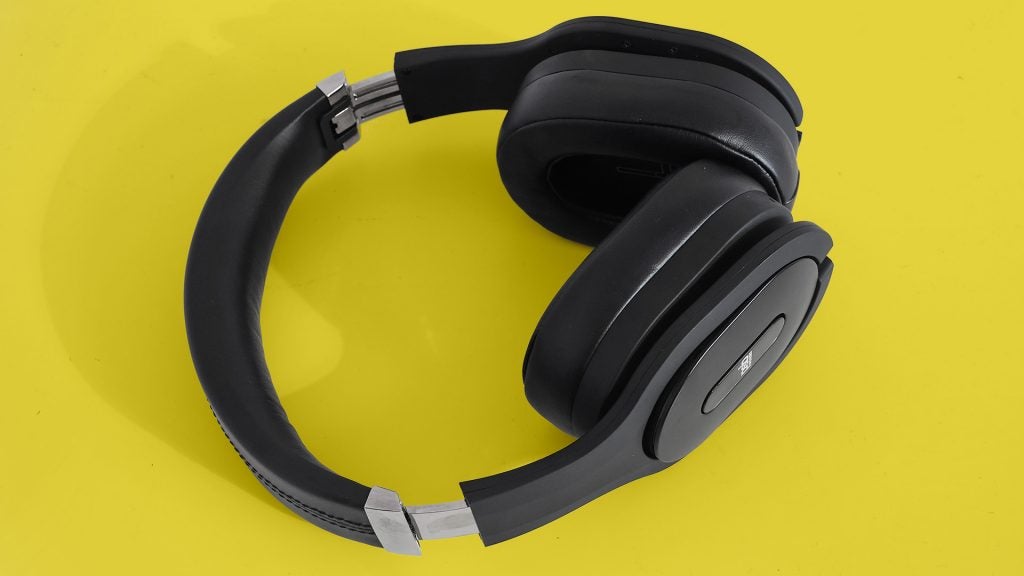 The PSB M4U 8 are accomplished enthusiast headphones. They’re engaging and punchy, but don’t quite reach the all-round heights of the rivals from Sony, Bose and B&W.

Comfort isn’t at the same level, and when used unpowered they sound a little flat.

Keep them charged and the PSB M4U 8 are among the best-sounding pairs in this class for pure enjoyment, however.

These PSB headphones compete, and sometimes beat, the big names for sound – but comfort could be better.