If you’re looking for a free VPN, ProtonVPN is definitely one to get, and its paid service is going from strength to strength, although its wide range of pricing options is confusing.

ProtonVPN, launched in 2017, is one of the newer contenders in a crowded VPN (virtual private network) market. Like its sibling, encrypted email provider ProtonMail, it focuses first and foremost on privacy.

Dedicated GUI clients are available for Windows, macOS, Android and iOS, plus a Linux command line tool and instructions for using the service on other hardware such as routers.

ProtonVPN has a clear no-logging policy which, as its transparency report reveals, means that there’s no data hand over to authorities when a warrant is enforced against the company. However, Swiss authorities have the right to order ISPs to enable logging to collect data in criminal cases, which Proton Technologies AG has done, with notification going to the person whose account was involved.

While the company clearly fights orders that it suspects may expose whistleblowers or contravene its users’ rights, it’s still inherently less secure than a no-logging service that’s based in a country that doesn’t have any laws or back doors allowing authorities to force data collection.

ProtonVPN’s Windows client has a particularly attractive charcoal and green interface. The main display allows you to select countries from a list or a map, use a pre-generated fastest or random connection profile to pick an endpoint based on those criteria or create your own profile, with options including connection type, country and specific server.

The main endpoint list allows you to select specific endpoint servers and shows how busy each one is, and which connection features they provide. Special features offered by ProtonVPN endpoints include Secure Core – which offers additional protection against external network attacks, P2P for the benefit of torrent users, and Tor, which uses The Onion Router network to help further anonymise your activity.

A traffic graph helps you to monitor your connection’s performance, as well as how much data you’re sending across it. Open the client’s Settings interface, and you can enable features including a VPN kill switch to cut off all internet traffic if your VPN connection goes down and Split Tunnelling so you can allow specific applications or IP addresses connect outside the VPN.

You can also have ProtonVPN load at boot, connect at launch, switch between TCP and UDP and opt into an Early Access programme for new versions of the VPN client. 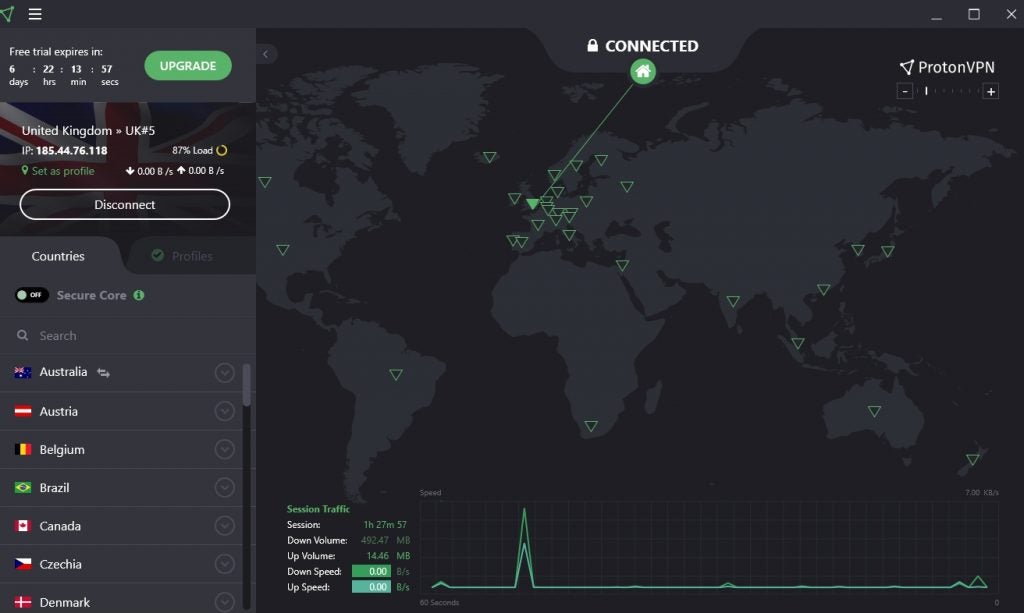 Average HTTP download speeds for the entire April 2020 VPN group test, measured from a test system in London with a fast and stable internet connection, were 65.63Mbps from UK endpoints, 71.37Mbps for the Netherlands and 51.15Mbps from the US.

These tests used the ProtonVPN Plus service, which gives you a wider range of servers to choose from than the company’s Free or Basic tiers. I’m really impressed by the degree to which ProtonVPN’s endpoint performance has improved over the last year, and it’s been a consistent trend. This time around, download speeds from US endpoints have been phenomenal, well above not only the group average but also the test system’s non-VPN’d reference speed.

Should you buy ProtonVPN?

As well as an outstanding free tier, which only limits the endpoint servers you can use to three, in the US, the Netherlands and Japan, rather than restricting how much bandwidth you can use, there are three different paid tiers, which can make comparing the service to its rivals a little confusing. I always use the Plus tier when testing, unless specifically stated otherwise.

Basic covers two devices and gives you access to all standard servers in the 46 countries now covered by ProtonVPN, as well as some dedicated P2P servers, for an extremely competitive £4.07 per month, £39.12 per year or £64.38 every two years. It’s a good entry-level VPN offering for users on a budget, but the lack of streaming endpoints chafes a little and will be a deal-breaker for some.

You can pay anonymously using bitcoin but have to create a free account and contact support to do so.

ProtonVPN has an outstanding unlimited-bandwidth free tier and a good value but slightly confusing, range of paid-for tiers. It’s packed with features and provides clients and configuration instructions for a wide range of different devices and operating systems.

If you’re looking for a free VPN, ProtonVPN is definitely one to get, and its entry-level paid subscriptions are also very competitively priced. We appreciate ProtonVPN’s efforts to be transparent and privacy-oriented, but Switzerland isn’t the best location for cast-iron privacy guarantees. Private Internet Access if you’re on a budget, or ExpressVPN have both had their privacy policies proven through government seizures.

ProtonVPN Basic would be a shoo-in budget option, but its low annual subscription fee actually still costs more than Private Internet Access. However, the fully-featured ProtonVPN Plus tier is fast, great at streaming, and a strong competitor against services such as erstwhile Trusted Reviews favourite NordVPN. It’s a particularly convenient choice if you’re already a ProtonMail subscriber.

But if you’re looking for value, Canadian VPN provider Windscribe espouses a similar commitment to transparency and is fantastic for streaming, making it the most obvious alternative to ProtonVPN Plus: it’s also half the price.