There has always been a gulf between the British and American attitudes to sports games (and let’s not mention the Japanese attitude – all cutesy, cartoon graphics and oddball bonus prizes). The US likes things slick and showbiz; rock soundtracks, fast-paced editing, big stars and branding, simplified simulation gameplay. We like all those things too, but we tend to think of them as the icing on the cake, not the essence of the cake itself. That’s why you’d never get a British developer doing something like FIFA Street, and why the team at Codemasters comes up with games like TOCA, not games like Need for Speed. 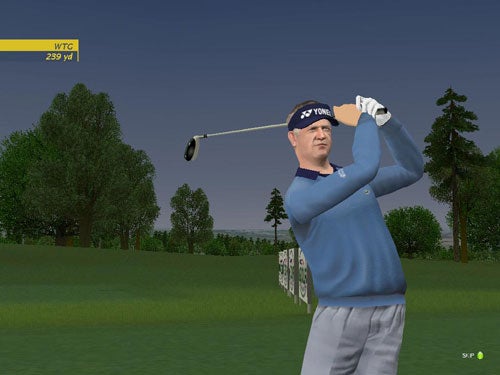 Now apply those processes to golf. On the US side, we get Tiger Woods 2006, with its signature Dave Matthews Band anthem, intuitive controls and those bizarre multiple split-second replays that accompany every killer shot, as if whacking a ball with a five-iron was the sporting equivalent of a Jean Claude Van-Damme high-kick. Now imagine a British equivalent. It takes a no-nonsense approach, avoiding a pounding rock score in favour of a cheerful little jingle every time you approach a new hole, and giving those clichéd replays a miss too. It offers subdued commentary, slightly plain camera work and realistic sound effects, and eschews all the scene-setting, crowd cheering, player saluting stuff you get in Tiger Woods. And most of all, it’s an attempt to get back to the basics of golf; the hands-on feel of the game that many hundreds of thousands of Brits play every Sunday morning. The game in question would be much like ProStroke Golf. 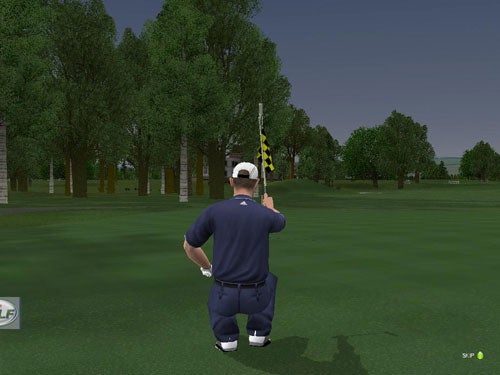 In fact, one of the great pleasures of ProStroke Golf for us Brits is that it couldn’t be more British if it tried. Commentary comes courtesy of the familiar dulcet tones of the BBC’s Sam Torrance and Radio 5’s Alan Green, with Ian Baker Finch to provide US players with some sort of reference point, and it’s full of the sort of light, softly-critical banter we’ve come to know and love. It also offers an extremely Brit-friendly line-up of pros to play with – including Justin Rose, Colin Montgomery and Ian Woosnam – not to mention a few well-known Euro types, like Sergio Garcia and Thomas Bjorn. And if Montie seems a little trimmer than in real life, and the in-game Woosie bears a slightly disturbing resemblance to a Pringle-clad Jabba the Hut, who cares? The overall result couldn’t be more homely if you met your slightly rotund rivals in the 19th hole after play. 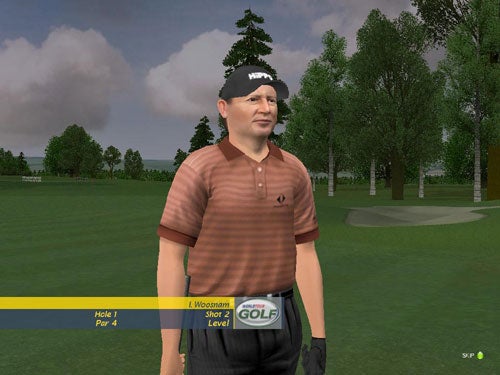 However, likeable as all that is, the ‘True Brit’ feel isn’t going to sell the game. What might is the control system, which is probably the most accurate and realistic system we’ve seen. As with most golf games you start by setting up the shot from behind, checking the layout from golfer to green and making adjustments for wind conditions and any hazards on the way. With Tiger Woods, you would then simply use the left thumbstick to take your swing, but ProStroke takes a slightly more complex approach. First, you switch to a downwards view of the club. Using this, you can use the D-pad to control the stance of your golfer, the left thumbstick to adjust the angle and facing of the club and then – finally – the right thumbstick to swing back, swing forwards, and connect. It’s intuitive enough to suit non-golfers, particularly as there’s a line indicator to gives you a real-time update on your swing, but if you have a passing knowledge of the noble game you’ll be surprised how much of your experience translates. You don’t have to fiddle with clumsy crosshair-on-ball diagrams or shot-modifier keys to add spin, fade or draw, or get the club-face under the ball in a bunker. Instead, you simply work out what you would do in real life, and apply it in the game. 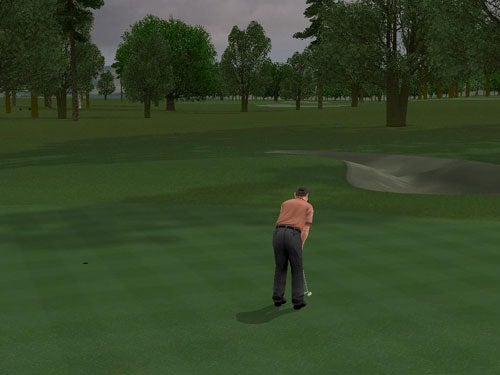 Admittedly, this system takes time to get used to. Your initial problem will be gauging distance. ProStroke Golf doesn’t go in for Tiger’s super-human power swings, so in many cases the quoted maximum distance for a club is a best-case scenario, and you’ll frequently fall short. This in turn will have a major effect on the way you play over water hazards or towards a sand trap. What’s more, ProStroke seems a lot less forgiving when you over or under-egg the swing. As with just about any golf game, putting also takes a certain amount of practice. While you get plenty of information on distance, along with an estimated percentage of putting power to use and some idea of the amount you’ll have to modify for slope, the pitch of the green from left to right is harder to read, meaning you’ll spend a lot of early games overcompensating and missing the hole, or under compensating with much the same effect. All I can say is that, with time, you will develop a feel, much like you do in real-life golf. 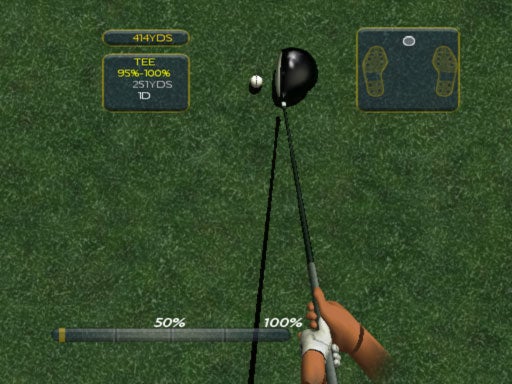 The important thing is that ProStroke golf gets all the basics right, and plays an enjoyable and grittily challenging game of golf. The mix of real-world and imaginary courses caters to most tastes and levels of ability, your AI opponents – even the pros – make mistakes, and the game always leaves you feeling that with a little more luck or a little more skill you could soon pull that handicap down. In a sense, it’s just like the real thing.

However, it has to be said that it’s not a game packed with features. You get quick match and single and multi-player tournaments, but there’s no online mode, and it has to be said that the career mode is fairly basic. There are tournaments and prizes to be won, plus a reputation system that sees your position rise not just when you win, but also through a series of cool, crowd-pleasing achievements. At the end of the day, though, it’s all a bit Spartan. And while a course designer is welcome, the player customisation options seem awfully thin after EA’s ‘gameface’ technology. With only a few costumes, haircuts and face and body types to play with, you’re in luck if you can get something that looks much like yourself. 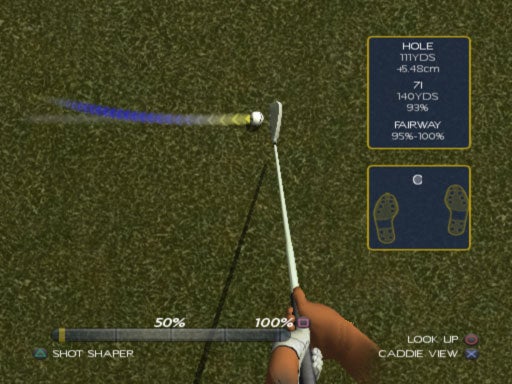 However, the biggest problem here isn’t depth but surface. The menus and the interface are slick, but the graphics are – to be honest – fairly rough. The courses look bland, the foliage looks primitive from a distance and plain terrible up close and even the water can only manage a slightly dull, motionless, sheen. The players are well-animated, but their facial modelling and texturing is slightly primitive. Anyone who’s seen Tiger Woods on the 360 will feel like they’re looking through a time tunnel at a golf game of circa year 2000, and even against the PS2 competition ProStroke faces some unflattering comparisons. This is a game you love despite its looks, not because of them. 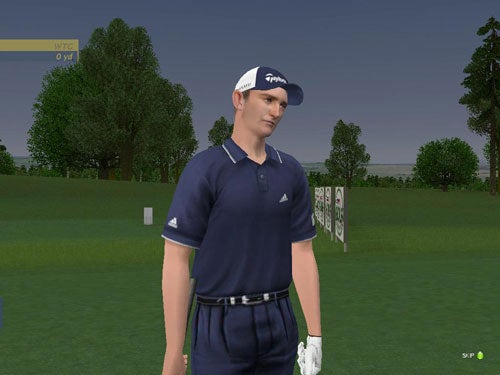 And it’s this kind of response that will most affect how you see ProStroke Golf. If you can do without the showbiz glamour and visual appeal, not to mention the sheer, bend-over-backwards desperation to entertain that surrounds EA’s blockbuster golf franchise, then you may form a lasting bond. In fact, I can imagine the more straight-laced Sunday golfer getting a huge kick out of ProStroke’s more authentic, Brit-centric approach. The more casual crowd, however, are going to dismiss ProStroke after a glance. Me? I’m caught somewhere in-between. I’ve enjoyed playing ProStroke, and it’s actually made me want to get back out there on my local course and play for real. And yet, as soon as I went back to Tiger Woods (just for purposes of comparison, you understand) I found myself having a better time, and I must shamefully admit that some of that was because I was having an easier time. 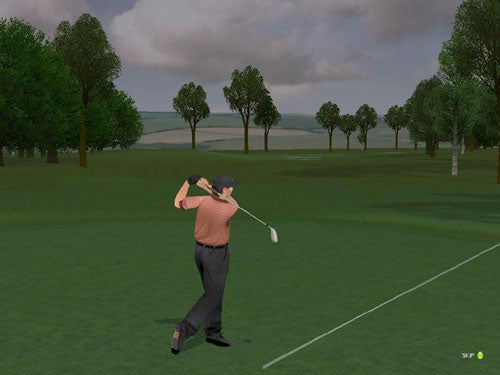 So, this is a case if you pays your money and takes your choice. If you’re a golf-course regular who wants a game that reflects the real-life sport as played in our rainy, windy climes, then ProStroke Golf will do you proud. If you’d rather tackle Pebble Beach the Hollywood way, wait for Tiger Woods ‘07 to roll around.


True-to-life golf without the EA glitz. ProStroke has solid controls and a richly authentic British feel, which almost makes up for its lack of visual glamour.