Promise Technology’s business has always been focused primarily on RAID controllers and large disk storage arrays but even it has been unable to resist the allure of the SOHO and SMB desktop NAS appliance. It steps in gingerly with a single product and here we see whether the SmartStor NS4300N has what it takes to cut the mustard in this fiercely contested market.


Supplied to us for review by UK audio visual specialist Planet Audio, the NS4300N is a compact box with an outer shell constructed entirely of plastic. There’s no physical security as the thin front door can’t be locked shut and the drives are held in place with simple plastic hot-swap carriers. It’s reasonably well constructed but will be found wanting when stacked up against the solid steel shell of Netgear’s ReadyNAS NV+. It’s also more obtrusive on the desktop as the fans for the chassis and power supply are noisier by comparison to said ReadyNAS appliance. 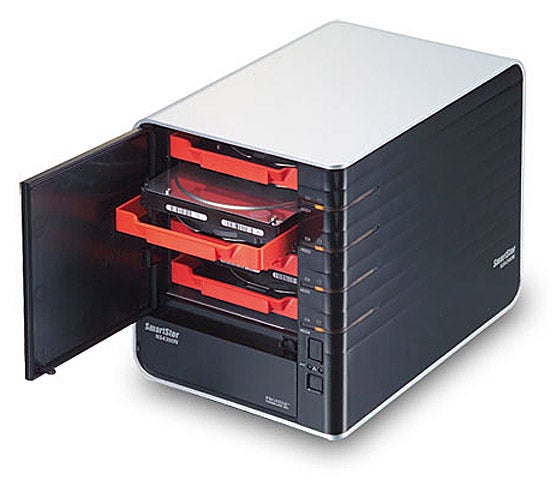 The appliance sports a decent 400MHz FreeScale MPC8343 processor and the review model came equipped with a quartet of 500GB Seagate Barracuda ES SATA hard disks. You get a modest 128MB of memory and the embedded Promise PDC40719 controller supports RAID 0, 1, 10 and 5 arrays along with hot-standby. It offers a Gigabit Ethernet port at the rear and the two USB ports alongside can be used to connect external storage, share printers over the network and add an intelligent APC UPS. The small button on the front panel could prove to be useful as it’s linked to the bundled SmartSync backup utility and pressing it fires up scheduled backup jobs on PCs running the software.


Promise’s Smart Wizard deftly handles initial configuration as it locates the appliance on the network and the Express mode offers data protection and sets up a RAID 5 array for you. The Advanced mode steps through setting the date and time, configuring the network interface and also offers a striped array for maximum capacity. The web interface is nicely designed and quite accessible. It opens with a setup wizard where you can create new users and groups, activate file sharing services for Windows, Unix, Linux and Macintosh users, start the FTP server and create new shared folders.


For Windows users you have a workgroup mode or the appliance can join an Active Directory domain. Share access can be strictly controlled as for each local user you can decide which shares they can use and whether they have read only or read/write access whilst quotas can be applied to control the amount of space they can have. FTP access can also be determined separately for each share.

Multimedia services are centred on the appliance’s DLNA server which can stream content to UPnP compliant devices directly over the network. This is an optional feature and to activate it you need to use the maintenance screen in the web interface to download the DLNA plug-in from the CD-ROM. Once the server starts it automatically creates a separate folder with three sub-folders for storing music, pictures and videos. One multimedia feature conspicuous by its absence is the ubiquitous iTunes server as virtually all the competition offers this as standard.


Backup features are plentiful as the appliance can run volume snapshots allowing scheduled point-in-time copies to be taken of selected volumes. These can then be used to restore them to a specific time. The NAS Replication feature adds value because at scheduled intervals it will copy all the data on the designated primary appliance to another NS4300N backup appliance on the same network. 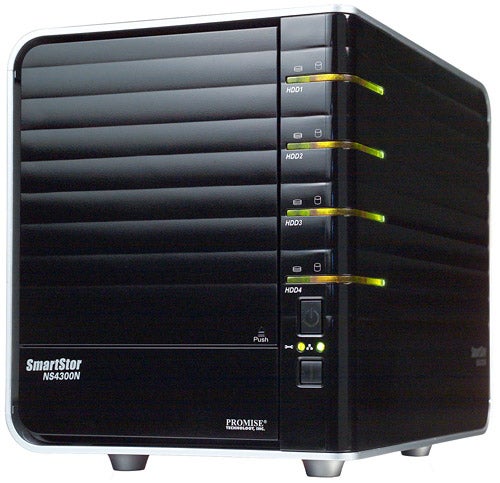 The One-Touch Backup feature is very similar to that offered by the Linksys NAS200 and worked fine during testing. From the SmartSync interface you need to create scheduled backup jobs where you pick your source files, a mapped folder as your destination and an interval which can be hourly, daily or weekly. Pressing the backup button on the appliance will automatically fire up the scheduled job but, as with the Linksys alternative, it will start ”all” scheduled jobs on ”all” PCs running SmartSync.


Every SmartSync backup job creates a folder on the appliance with the user’s name appended. Nested under this are more folders with the machine name and the drive letter making it easy enough to root through your backups when you want to restore data using SmartSync. We did find performance to be uninspiring, though, with a 12GB backup returning speeds of around 5MB/sec.


Promise Technology’s new desktop NAS appliance offers a good range of storage features along with some decent backup options. However, performance is below par and the 2TB model on review is a tad pricey when compared to much of the competition at this level.

(centre)”’A good range of RAID arrays are supported and the appliance supports array migration as well.”’(/centre)

(centre)”’Press the backup button on the appliance and all scheduled SmartSync jobs will spring into life.”’(/centre)