Best known for its extensive range of RAID controllers, Promise Technology now moves into the home and small business NAS appliance market with a modest range of appliances. It also brings yet another acronym to the storage industry although BYOD (Bring-your-Own-Disks) merely allows you to buy an unpopulated unit and add your own SATA hard disks.


A feature that piqued our curiosity with the NS2300N was Promise’s new SmartNAVI client utility as it claims to be endowed with artificial intelligence. This is stretching the imagination a tad although the utility does offer some useful features that help with general setup and configuration. SmartNAVI runs as a background task accessible from the System Tray and automatically locates SmartStor NAS appliances on the network. 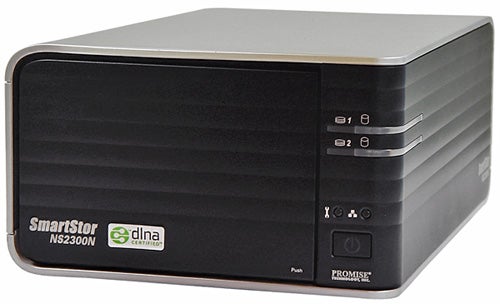 Selecting an appliance from this interface fires up the main window which provides a useful one-click setup wizard. This applies a range of default settings based on what it finds on your network and these include the IP address, time zone and automatic volume creation. The interface does a lot more as it allows you to manage key features on the appliance without having to use the PASM (Promise Advanced Storage Manager) web interface.


You can create volumes, manage users, groups and shares and access the new Download Station tool. The latter is a feature appearing with increasingly regularity in most desktop NAS appliances and allows you to retrieve remote files using BitTorrent, HTTP and FTP. We found it easy enough to create a link to our FTP server from the SmartNAVI interface whereupon the download started as soon as we’d added the link. Performance leaves an awful lot to be desired as a 690MB video clip FTP download from Netgear ReadyNAS and Iomega appliances delivered less than 0.4MB/sec average speeds in both cases 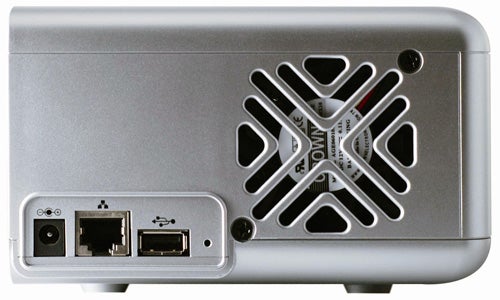 Promise can add new features to the appliance using plug-ins and along with the Download Station it also offers plug-ins for iTunes and DLNA servers. Previously, these could only be added by copying them to the appliance and installing them from the PASM web interface but this can now be done directly from SmartNAVI.


Activating the DLNA plug-in automatically creates three new sub-folders for storing music, pictures and videos allowing you to stream content to UPnP compliant devices directly over the network. There’s nothing much to see with the iTunes server as once activated the appliance appears in the iTunes client as a new server and advertises any music stored in its default Music folder.

The appliance itself is a reasonably well constructed plastic box although the front door can’t be locked shut and the drives are held in place with flimsy plastic hot-swap carriers. It’s endowed with a 333MHz FreeScale MPC8313E processor along with 128MB of DDR2 memory and the embedded Promise PDC20771 controller supports mirrors and stripes. You have a Gigabit Ethernet port at the rear and the single USB port alongside can be used to connect external storage, share printers over the network and add an intelligent APC UPS.


The main PASM web interface is nicely designed and also offers a setup wizard where you can create new users and groups, activate file sharing services for Windows, Unix, Linux and Macintosh users, start the FTP server and create new shared folders. Security is good as the appliance supports both workgroup and Active Directory modes for Windows users and share access can be strictly controlled with read/write or read only access granted to each user. You can also use quotas to limit their personal storage and FTP access can be determined on a per share basis. 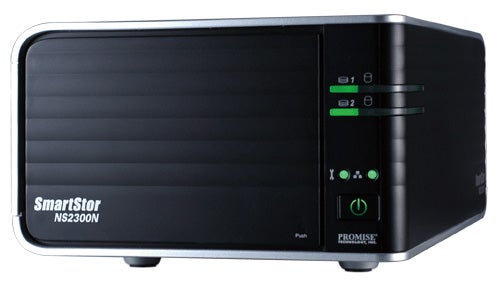 Backup options centre solely round the SmartSYNC tool which provides facilities for securing local files and folders to the appliance. This is accessed from the SmartNAVI interface where you select your source data and either secure it manually or run it to a schedule. If you enable the One Touch Backup feature from the PASM interface you can use SmartNAVI to fire up all predefined backup jobs immediately. Every SmartSYNC backup job creates a folder on the appliance under the user’s own share with sub-folders showing the machine name and the drive letter. Data can be easily restored directly from the SmartNAVI interface as it lists all your own backups and associated files on the appliance and you can restore them to their original location or another of your choice.


This little two-drive NAS appliance offers a reasonable range of features for the price and Promise’s new SmartNAVI utility provides easy configuration and swift access to the main utilities. However, our favourite dual-drive NAS box is still Netgear’s ReadyNAS Duo as it offers much more for a similar price and better performance. 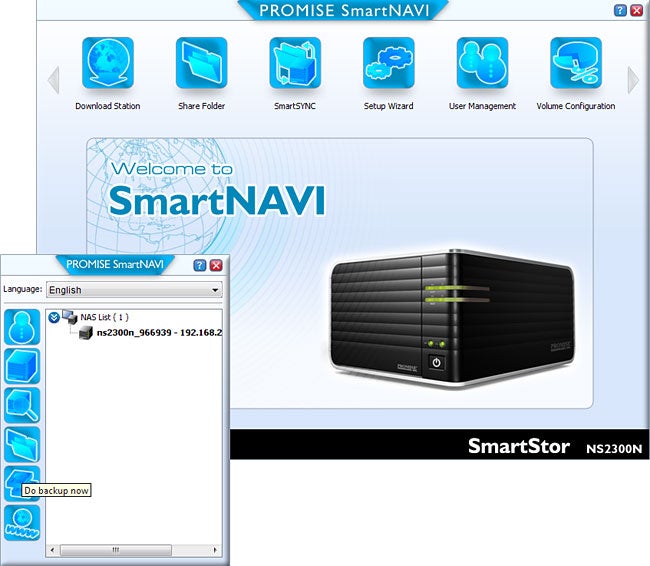 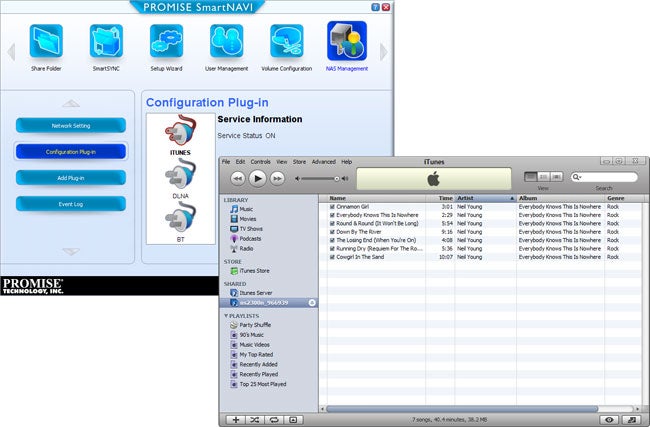 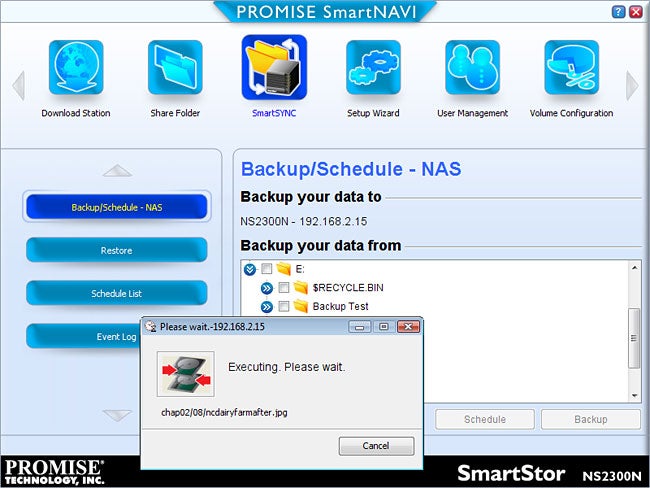 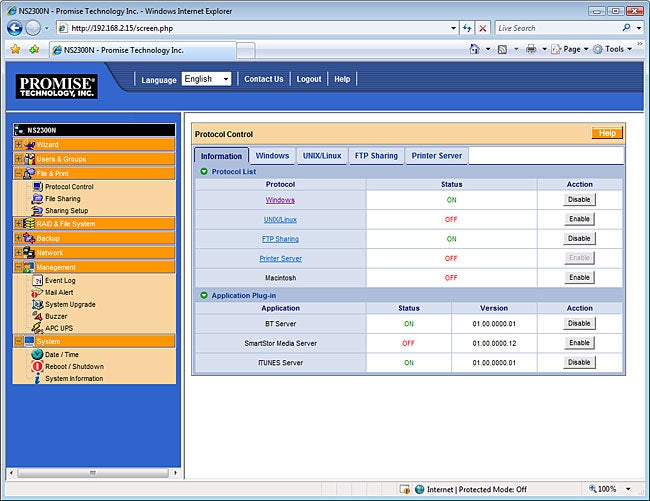 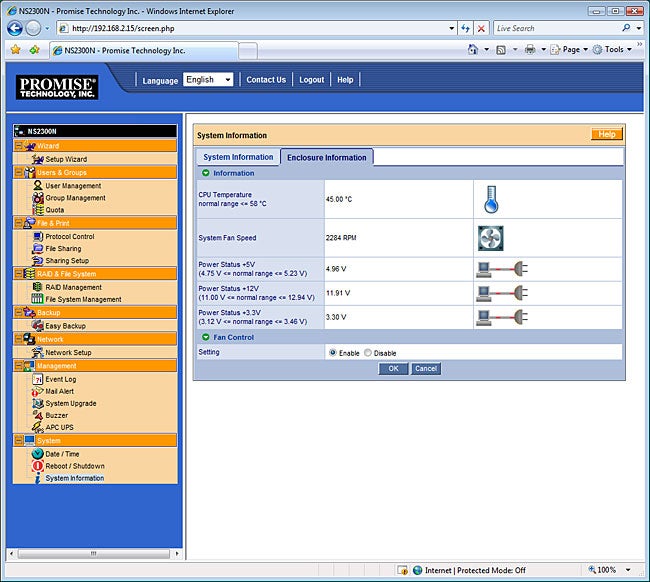