If you’re one of those people who likes to get a lot of ‘real estate’ for your money, the Action! M20 projector from Norwegian brand projectiondesign is probably not the projector for you. For something costing north of £3,000 it’s really remarkably small, with its tiny footprint and dramatic curves and grilles making it look more like a funky bit of fun than a truly serious home cinema machine. But in this case, we assure you, looks can be deceptive… 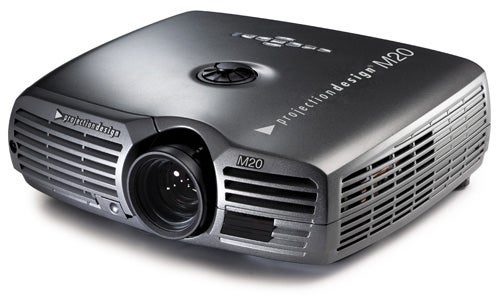 For starters, making the M20 so diminutive hasn’t exactly been easy for projectiondesign – inside the little exterior there really does beat a mighty large projection technology heart. In fact, to realise its dream of fitting high quality optics into a truly insubstantial chassis, projectiondesign turned to the same people who design the renowned Koenigsegg super car and Hydrolift power boats. Plus it made the bodywork out of cast magnesium so that it could function as a heat sink, removing the customary need for ‘cooling’ space inside the projector.


In other words, the M20’s smallness is for once more a sign of its seriousness than an indication of any kind of shallow approach. Though for those of you who are suckers for a bit of glamour, you might like to know that projectiondesign does the M20’s high gloss exterior in four equally cute colour options: Vanquish Grey, Pearl White, Maranello Blue, and British Racing Green.

Projectiondesign’s innovations with the M20 aren’t restricted to its TARDIS-like bodywork. For inside resides something called BrilliantColor: a brand new imaging arrangement that the company’s own engineers have developed in tandem with Texas Instruments (which invented the DLP technology the M20 uses).


Designed to produce brighter peak colours and more natural tones, with less accompanying colour noise, BrilliantColor comprises two elements: software algorithms and a new colour wheel design that includes yellow, cyan, and magenta elements alongside the usual red, green and blue. While other brands can use the software part of this system, the M20 is currently the only 720p DLP projector using the software and hardware components together. Hopefully this full BrilliantColor system will help give it the sort of performance edge over the 720p competition that its relatively high price really demands that it should.

Connectivity is actually a touch disappointing, thanks to the provision of a single DVI-type digital video input. There’s no great problem with this jack not being an HDMI, as it’s a simple and not necessarily expensive process to equip yourself with an HDMI-to-DVI cable, or an HDMI-to-DVI adaptor. And actually the DVI socket is arguably sturdier than an HDMI one anyway. The problem is that there’s only one such input; this is not really enough in these days of HD disc players, Sky HD receivers and next-gen games consoles. You may therefore need to factor in the cost of a digital input switching box, unless you happen to have an AV receiver with HDMI switching built in.

Elsewhere, video connectivity is pretty much as it should be, with a D-SUB port, component jacks, S-Video and composite video options. Plus you get a few ports that indicate a desire on projectiondesign’s part to make the M20 appeal to the custom install market, namely a USB, a 9-pin RS232 and an RJ-45 TCP/IP port. It’s worth mentioning that the digital input is configured to handle practically any HD format you could think of, including 1080p/24fps.


As indicated earlier, the M20 sports a native pixel count of 1,280 x 720 – something that may disappoint people now that full HD projectors using other LCD and SXRD technology are selling for around the M20’s price. But although we don’t intend to cover all the arguments here, there are plenty of people in the AV world who’d argue the benefits of DLP – especially in terms of colour richness, life cycle and black level – more than counter the problems DLP has delivering a full HD resolution at an affordable price point. 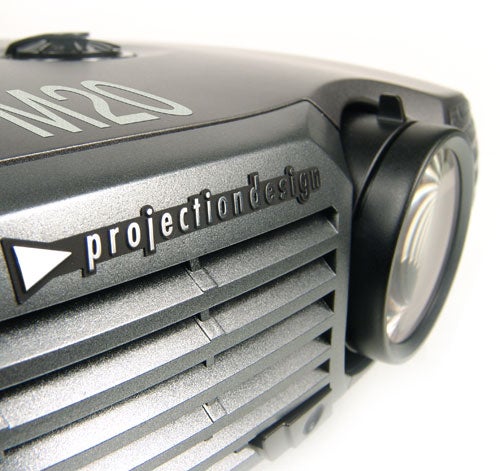 Having mentioned black level, it’s nice to find the M20 boasting a contrast ratio of 4,000:1 from its Texas Instruments DarkChip 3 DLP system – and this figure becomes even more impressive when you realise that it’s a ‘true’ one that doesn’t depend on a dynamic iris to reduce brightness output during dark scenes, as happens with LCD and SXRD technologies.


This isn’t to say that the M20’s brightness is completely fixed; you can actually adjust it yourself between 500 and 1,000 ANSI Lumens to suit the demands of your tastes, room, or the source material. But the point is that setting the brightness level is your choice rather than the projector’s.

Setting the diminutive M20 up is a breeze, thanks in particular to a superb level of optical lens shift and plenty of optical zoom in the Fujinon-sourced lens. The onscreen menus are tidily organised and well presented too.


Our testing of the M20 inevitably focussed at first on its BrilliantColor functionality. Are its colours really noticeably superior to those of rivals in the same class? Actually, they are. The already intense colour scheme of Viva Pinata on the Xbox 360, for instance, looks even more vibrant, solid and three-dimensional on the M20 than on any other projector we’ve seen for the same kind of money. But it’s not just ‘cartoony’ fare that benefits from BrilliantColor. The endlessly filtered colours of Ridley Scott’s Kingdom of Heaven on Blu-ray, for example, are delivered with seriously impressive authority and subtlety, getting much closer than most mid-range projectors to the sort of expressive colour quality we experienced when we saw the film in our local Odeon

Once the impact of the subtler colour palette and extra dynamism had sunk in, we also noticed how clean colours looked, with little if any sign of the common DLP failing of dot noise over rich colours.


Talking of dot noise, the M20’s colour wheel arrangement also helps it stay largely free of two other traditional DLP issues: dithering noise over moving skin tones, and the rainbow effect, whereby stripes of pure colour can flit around in your peripheral vision. 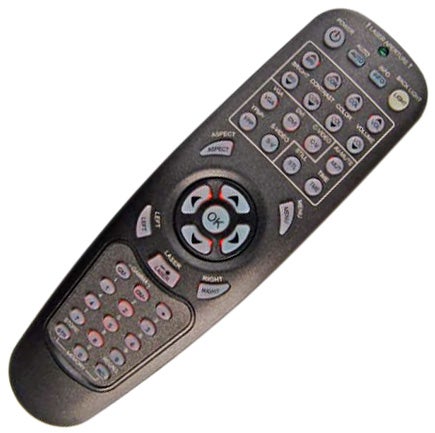 The M20’s black level response is also outstanding for its price point. The space backdrop to the opening space battle of Star Wars Episode III recorded in HD from Sky looks largely free of the tell-tale greyness that flattens the scene out on lesser projectors. Meanwhile, the black level depths are achieved ‘naturally’ enough to retain plenty of subtle shading detail in, say, the shots of all the huge space craft. In fact there’s plenty of detail of all types in the picture by 720p standards – so much so that it gets much closer to giving 1080p rivals a run for their HD money than we’d anticipated.


The only real issue we have with the M20’s pictures is the way fast-moving objects can seem to flicker and jump a touch – though this is also seen to some extent with much more expensive DLP units and doesn’t really amount to a great deal when set against all the things the projector gets right.

It’s also worth noting that you can make a right royal mess of pictures if you’re not careful with some of the setup options available to you. The gamma, lamp output and BrilliantColor presets in particular are fraught with danger – though ironically the best approach is not to be afraid of them and to just tinker around with them until things look about right.


Actually, ending that last paragraph with the words ‘about right’ is unfair. It really should have ended with ‘absolutely brilliant’. For when you get the M20 and its BrilliantColor system firing on all cylinders, the result is genuine movie magic that more than justifies the slightly premium price point.