Despite its family-friendly nature, Nintendo has been uncharacteristically keen to snare mature players with the Wii U. First was the cult sequel Bayonetta 2, which featured foul language, over-the-top violence and suggestive themes. And more recently we’ve had the dubious pleasure of Devil’s Third, a game that offers similarly risky content but with drastically less assured production values. Both of these titles were created with investment from Nintendo to secure their Wii U exclusivity, and they’re now joined by another third-party offering in the form of Project Zero: Maiden of Black Water.

Known elsewhere in the world as Fatal Frame, this is the latest in Koei Tecmo’s long-running survival horror series. The story revolves around three characters – Yuuri Kozukata, Ren Hojo and Miu Hinasaki – and a mysterious mountain location which is plagued by supernatural activity as well as a spate of suicides.

The setting is arguably one of the strongest elements of Project Zero; the game takes place in almost complete darkness, with torches or other light sources casting only minimal illumination, dramatically increasing the tension and amplifying the many jump-scares which occur during the game’s story. 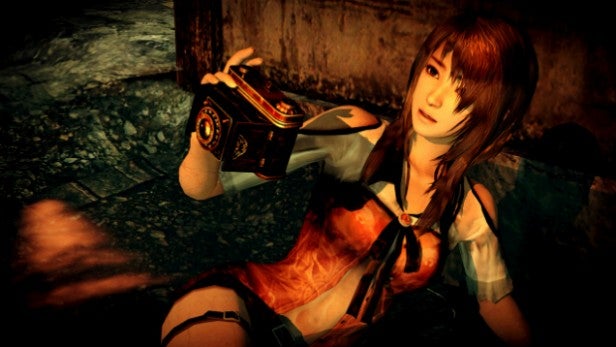 Navigating the spooky mountain is a matter of using the left stick to move and the right stick to adjust your view. You can sprint at certain points, and at others it’s possible to follow a spirit echo to your next objective.

Various items are scattered throughout each location, and these range from usable items that restore health to written journals, which give further insight into the surprisingly arresting narrative. However, by far the most important item in your possession is the Camera Obscura, a photographic device that provides your only means of fighting off the many malevolent spirits which stalk the mountain.

The use of a camera to combat such spooks is something which has been part of the series since it began, but the concept is given a new level of immersion thanks to the Wii U GamePad. When a ghost appears you have to snap it with the camera to deal damage, and in this case, the GamePad’s screen becomes the viewfinder.

Using the built-in motion controls it’s possible to twist and turn the controller to include more targets in your shot, increasing your chances of emerging from the battle unscathed. 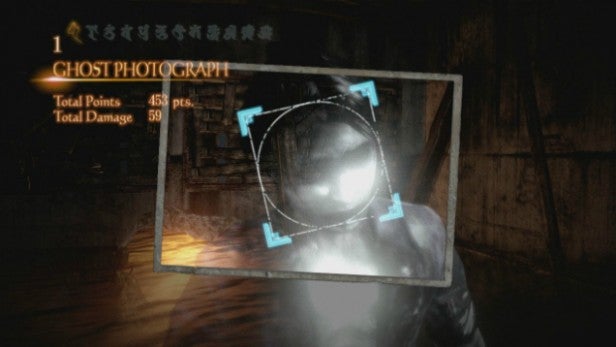 There’s a surprising degree of depth to this mechanic, too. Different lenses can be attached to the camera for bonus effects, and using rarer film will ensure that each photo deals more damage and you don’t have to wait as long for the next shot to load.

It’s possible to upgrade the Camera Obscura too, making your life a little easier and giving you incentive to achieve decent shots. Understanding how to capture the perfect image is of vital importance too. As you snap the ghosts parts of them fly off and drift around the screen, and if they reattach, the damage you’ve caused is negated.

By getting five or more targets in a single image you can trigger bonus attacks, and taking a photo just before a ghost attacks you results in a “Fatal Frame” – a blow which deals significant damage to the spook but puts you at risk. Distance is an important consideration, too. If you move away from the ghost to avoid attacks your shots won’t be as potent, but coming in closer to deliver the killer blow leaves you exposed, especially when you’re fighting multiple enemies.

The Camera Obscura is used during exploration, as well. From time to time you’ll spot ghosts in your peripheral vision that don’t pose any immediate threat but will certainly deliver a scare. For example, crawling through a tight space early on in the game sees a pair of ghostly legs materialise in front of you, just dangling from the top of the screen – the ghost of someone who hung themselves.

Elsewhere, you’ll notice ghosts standing in doorways off the beaten track which vanish almost as quickly as they appear. If you’re quick enough you can whip out the camera and snap a photo, which earns you bonus points to be spent on upgrades. 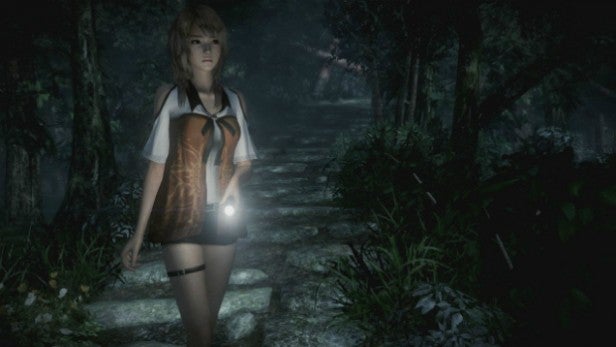 With its dark and disturbing storyline, penchant for jump-scares and surprisingly tense combat, Project Zero is one of those games that you might want to avoid playing late at night with all the lights off. Like classic Japanese horror movies such as The Grudge and The Ring, it possesses an eerie, oppressive atmosphere which makes you cautious about every step you take and every corner you turn.

However, some of the game’s tension is down to the awkward controls rather than the talent of the developers for creating spooky set-pieces.

All three of the protagonists are tricky to move around the game world. Their general responsiveness is sluggish and alternating between a slow walk and a sprint is harder than it should be. You never really feel like you’re in total command of the character.

This problem is exacerbated when you’re holding down the ZR trigger to follow a spirit trail. The character’s viewpoint locks onto the spirit as it moves, and letting go of the trigger causes the third-person camera to snap back, making movement feel even more jerky and inconsistent.

All of this combines to make even the most basic of tasks frustrating; it feels like you’re steering an ocean liner rather than a real person, and just getting them to walk near an item of interest feels like a exercise in trial and error. 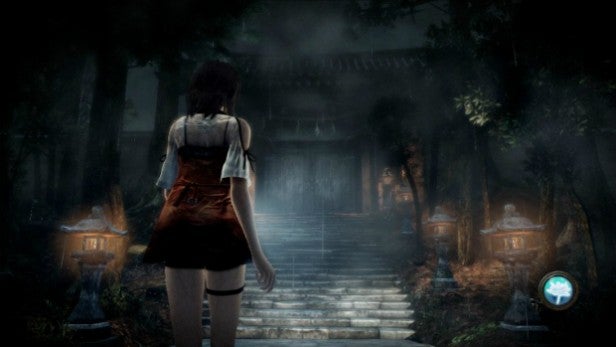 The control problems are even more irksome when you enter a combat situation. Activating the Camera Obscura and preparing for battle means pressing the X button, but you still have control of the character’s movement in this mode. Finding targets is therefore a matter of mixing up motion control with analogue sticks, while simultaneously alternating your view from the TV and the GamePad screen.

You can dodge attacks using the B button, which promptly drops you out of the Camera Obscura shooting mode – a disorientating experience which, when surrounded by ghosts, isn’t entirely helpful.

There are variations of the core gameplay – including one scene where a character has to use a network of cameras to keep a home secure – but generally you’ll be doing the same thing over and over again. You explore a location, pick up items, follow spirits and have some photographic battles with ghosts.

The ability to connect with spirits you’ve weakened in battle allows you to open up a bit of their back-story and the game keeps track of all the spooks you’ve encountered, but even with these additional layers of complexity it’s impossible to shake the feeling of repetition. 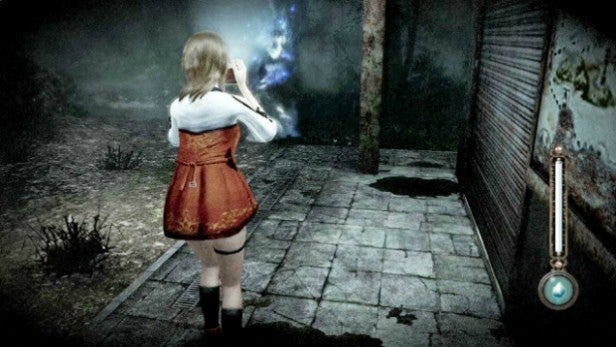 Koei Tecmo’s efforts to maintain interest include making sure that the female leads in the game remain as nubile and sexually appealing as possible at all times. They wear revealing clothing (in the Japanese version of the game you can even unlock bonus outfits which are little more than underwear, although these have mercifully been replaced in the western edition with Samus Aran and Princess Zelda costumes) and as they become drenched in water – something which makes your attacks more powerful but also results in more ghosts being present – their already skimpy outfits cling to their impossibly svelte bodies.

This is hardly a new addition to the franchise and certainly isn’t any more shocking than what we witnessed in Wii U stablemate Bayonetta 2, but at times it feels like more attention has been spent on ensuring the ladies are as attractive as possible while other aspects of the game’s presentation suffer.

There’s some particularly bad pop-in of environmental elements for example, and the frame-rate is prone to stutter throughout. A little more polish elsewhere would have worked wonders.

Verdict
Project Zero: Maiden of Black Water certainly delivers when it comes to scaring the player witless, and its use of the Wii U GamePad is commendable. If only other developers had been so bold with their ideas, Nintendo’s console might not be in the dismal commercial predicament it currently finds itself in.

The dark and often shocking storyline is also refreshing, and will strike a chord with fans of Japanese horror movies. However, the controls rarely feel right even when you’ve been playing for hours, and the ghost-snapping mechanics become quite samey and repetitive as the game progresses.

The visuals could also have done with some extra work; while the attractive female leads look amazing and boast incredible detail, this comes at the expense of other elements of the game, such as background pop-in and a frame-rate which struggles to maintain consistency.

Software-starved Wii U owners and horror aficionados will overlook such shortcomings, but everyone else should try the free trial demo before pledging their cash.