A first look at the Microsoft Edge preview

When Microsoft first unveiled Windows 10, one of the more intriguing new features was a new web browser with the working name Project Spartan. Optimised for touch and with a host of in-built extras like a reading mode, it’s designed to sit alongside Internet Explorer providing a more feature rich experience while Internet Explorer takes care of legacy duties.

Now Microsoft has given Project Spartan an official name: Microsoft Edge. The new browser will form a key part of the upcoming Windows 10 operating system, so it’s a hugely important to the success of Microsoft’s best-known product. It’s been available as part of Microsoft’s Windows 10 Technical Preview for a while, so here’s what we’ve made of it so far.

The most obvious change with Microsoft Edge is a tweaked look and feel. The top navigation bar is now thicker and has a much more uniform selection of buttons that should make it easier for use with touchscreen devices. In contrast, Internet Explorer has different sized icons and a more cramped navigation bar.

The overall layout is also a bit more logical, with the refresh button next to the back and forward buttons and alongside the URL bar. This puts all the ‘clutter’ in one row, while tabs have been moved to a separate row above where there’s more room for them and they simply make more sense to be. This is pretty much the convention now in web browsers, with Chrome and Firefox also arranged this way, so it’s a sensible change.

Microsoft could quite easily have made these changes to Internet Explorer – none of these cosmetic tweaks would have affected compatibility – but has chosen to use them as a way to help differentiate the two browsers.

The first big new feature of Microsoft Edge is an in-built reading mode. This re-formats whatever pages you’re looking at into an easy-to-read layout that’s free of adverts, menus and other distractions.

It’s not a new concept but to have it built in is fairly uncommon, with most browsers requiring an extension to enable the feature. Safari is one of the few to have it. What’s more, Microsoft’s implementation is pretty slick. 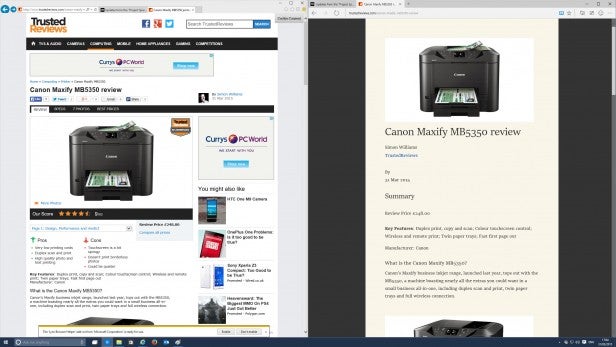 The content is shown on a non-eye-straining magnolia background, rather than pure white, and the font is set to a nice easy-to-read size. Images are also correctly formatted and positioned, as are any headings.

It can’t work miracles, though, and any content that isn’t a fairly conventional article will not work, with the Reading Mode option greyed out when not applicable. This includes things like website homepages that are mainly just boxes of links to articles, photo galleries or any content that is dynamically created as you move around or interact with the website.

Accompanying the Reading Mode is a Reading List. This sits alongside the Favourites and is a way of temporarily bookmarking a page without adding it to your longer-term favourites.  The Reading List links are shown with large pictures taken from the content and large clear headlines, so it’s really easy to quickly scan through and find the link you want. In contrast the favourites list uses traditional compact favicons to distinguish each link. 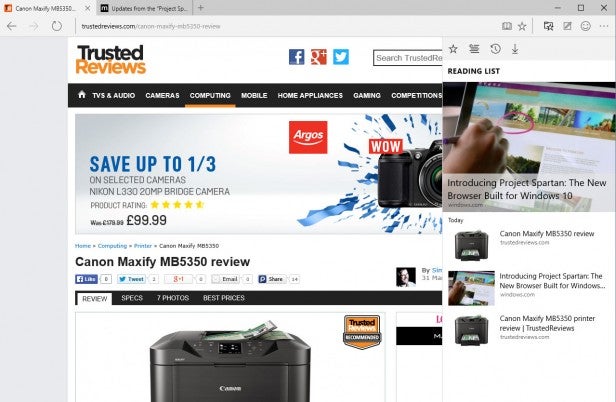 Although other browsers have similar systems this is by far the slickest way of managing a reading list that we’ve found. The only thing missing is a direct way to link to the Reading Mode version of the page – you can bookmark from the Reading Mode but the link will take you back to the full version.

Perhaps the feature that most shows how feature-rich Microsoft is trying to make Microsoft Edge is its annotation abilities. Users can simply tap a button to take a screenshot onto which they can start drawing, either with a mouse or finger.

There are tools for writing over, highlighting or doing speech boxes, along with an eraser and a cropping tool. It also has buttons to save or share the resultant image, making for a complete, integrated annotation tool.

We can’t help but feel it’s a slightly niche tool – especially as the result is only a dumb image rather than a data-filled webpage – but as a unique feature to shout about, it’s pretty impressive. 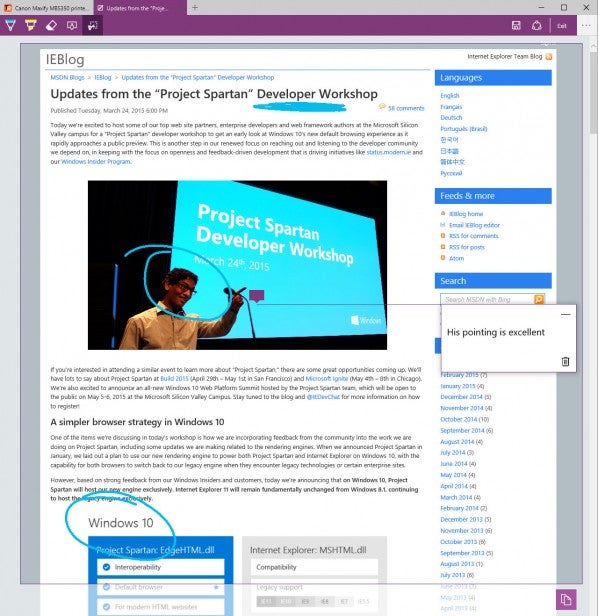 Also new is the rendering engine, although this is a far more subtle change when it comes to user experience. We didn’t notice Microsoft Edge being any quicker than the latest version of Internet Explorer, and nor does it appear any different in terms of the way items are loaded on page or the way content adjusts when zooming in, for instance.

Instead, the new engine is designed to simply bring Microsoft’s main web browser in line with more modern underlying technologies. While Internet Explorer will continue to use its older rendering engine to support old technologies – particularly for business tools built using the browser – Microsoft Edge can move forward supporting the latest tech.

A key motivator for Microsoft Edge is that it lives up to its original codename name, Spartan. The whole experience is far less cluttered than Internet Explorer. We’ve touched on the tidied-up navigation bar, but it applies to other areas as well.

Right-click on an image and you’re presented with five options, on Internet Explorer it’s 21. Right-click on a link and it’s three vs fourteen. Click on a URL in the nav bar and its five vs 11.

It’s not just context menus, either. Jump into the menu and there’s a proper Settings tab for Microsoft Edge, while Internet Explorer still just opens up the main Windows Internet Settings.

The overall result is a much easier and cleaner experience.

Sadly that’s all we get to play with on Microsoft Edge at the moment, at least in the UK. For US users some of the Cortana digital assistant features have been implemented, allowing the service to suggest useful information as you browse the web – directions to the hotel you’re looking at or reviews of a restaurant, etc.

The offline reading mode and roaming across devices features are also missing. What’s more, the current release is still very unpolished so lots of odd things happen or features just don’t work, so the full picture of Microsoft Edge is definitely yet to be revealed.

Overall, we’re largely impressed with what we’ve seen of Microsoft Edge so far. Its rendering engine is as speedy and powerful as we’d expect and will no doubt make the browser easier to program for, but it’s the in-built features that really sell it.

The reading mode is very useful and so very neatly implemented. Likewise the annotation stuff, while probably a bit of a niche, is very nicely done – no more faffing about with different screengrab tools and Photoshop just to make a few comments on a website or article.

The overall experience is also blessedly clean and simple, with Microsoft doing a good job of tidying up the clutter that made using Internet Explorer at times confusing and cumbersome.

What’s more there are still more features to come, so the future’s certainly looking rosy for Microsoft Edge.

Whether it’ll be enough to drag people away from the likes of Chrome and Firefox is less clear as the hurt runs deep when it comes to people’s memories of how bad Internet Explorer used to be. Nevertheless, Microsoft can but try and we think it’s going in the right direction.