What is the Pro-Ject VT-E?

The vinyl revival might be in full force and record prices are rising, but the turntable landscape has been a funny old place. Tapping into our nostalgia have been armies of tiny retro record players costing surprisingly little – because they sound like a bag of spanners in a washing machine and wear out the grooves on all those shiny black discs on which you’ve just spent a fortune. Still, at least they don’t look boring.

The Pro-Ject VT-E is aimed at this new wave of style-conscious, space-saving vinyl junkie, with a vertical design that even permits it to be wall-mounted. No, it doesn’t sit flat like a normal record player. Yes, it stands almost upright. Funky, eh?

But is this just gimmicky style over well-established substance? Pro-Ject is a big name in turntables, so you’d hope not…

Opening the VT-E’s box, you’re greeted by what looks like a fairly completely built turntable. There’s a vinyl-coated MDF platter and felt mat on top of an attractively triangular, vinyl-coated MDF plinth that’s pre-fitted with an 8.6-inch aluminium tonearm.

There are actually two versions of this record player – the VT-E R and VT-E L – with the R having the arm mounted on the right, and the L with it on the left. The version I was sent was the former, in black; red and white finishes are available too.

The tonearm is unique to the VT-E models, requiring a special design to cope with vertical playback. Although the armtube and headshell are the same as those on the Pro-Ject Elemental, it has a different bearing housing, base and counterweight. Most importantly, it has a spring specially placed towards the counterweight, which helps maintain tracking despite the whole verticality thing. 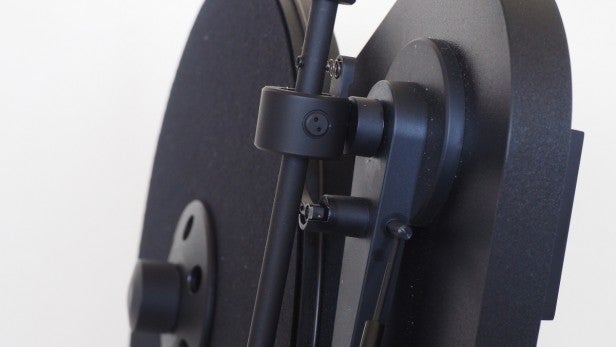 Also protruding from the plinth are a familiar-looking belt pulley, a threaded spindle for taking one of Pro-Ject’s screw-down record clamps – actually essential in this case, again because of that vertical design – and a power switch mounted on the right-hand edge.

Around the back is a socket for the power adapter, as well as a captive 1m stereo phono interconnect cable, which is of decent quality for this price point.

The VT-E isn’t quite a plug-and-play turntable, partly because it doesn’t have a built-in phono pre-amp – you’ll have to buy one separately – but also since there’s a little construction required, depending on how you intend to mount it.

Opting to free-stand it on my rack to start, I had to remove the platter and pop two bolts through the plinth, which screwed into the optional leg section. This leg is made from the same matte-finished, vinyl-coated MDF as the plinth, and takes the overall front-to-back depth of the turntable to around 10 inches. Not too much space-saving in this configuration, then, although it certainly does look eye-catching. The plinth and leg are fitted with plastic, felt-bottomed feet – three in total. 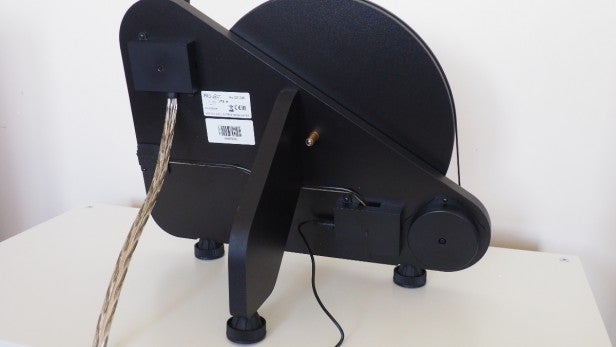 For wall-mounting there’s a small metal bracket that bolts on using the same holes as the leg, and has just a single hole at its top for a screw to go into the wall. It hardly seems the most secure of fixings, but presumably Pro-Ject played around with multiple fixing points and settled on this one for the best sound – rather than because it was the cheapest option. We can but hope.

Sticking the VT-E on the wall definitely means you benefit properly from the space-saving vertical design, but bear in mind the cabling. You’ll end up with trailing wires unless you channel the cables into the wall – not really an option with that overly short, captive phono cable, so you might need to get rewiring. The new Bluetooth-equipped version, the VT-E BT, might make more sense for wall-mounting, but the problem of that trailing mains cable remains. 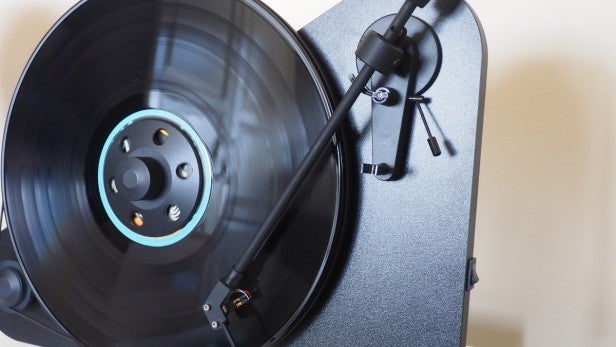 The VT-E comes with a pre-aligned Ortofon OM5e moving-magnet cartridge – the same as found on most of Pro-Ject’s entry-level decks – and with the tracking weight preset. In fact, the instructions make it clear that only Ortofon OM cartridges are to be used with the VT-E because of the arm setup, so bear that in mind if you’re thinking about upgrades further down the line.

Changing speeds between 33 and 45rpm is achieved easily by hooking a finger around the rubber drive belt and shifting it up or down a level on the pulley. The pulley is exposed, so thankfully there’s no need to remove the platter to do this – as you would have to on Rega players. The disadvantage is that it can be a pain to refit the belt around the platter if it ever pops off.

I’ve never been a fan of Pro-Ject’s screw-down record clamps, but at least in this case there’s a valid reason for one: to keep your vinyl from wobbling in its upright playing position. Still, the screwing adds a little extra faff to the process of playing vinyl, plus the size of the clamp means it covers record labels, so if you’ve left a record on the player for any length of time you’ll probably have forgotten whether it’s the A or B side, and can’t check without spinning up or removing the clamp. I know, first-world problems…

Actually more annoying is how difficult it is to see where you’re placing the needle. With the VT-E at the fairly normal height of a standard rack’s upper shelf or the top of a sideboard, I had to get my eye level with the cartridge to see what I was doing. Attempts to place the needle while just standing up straight led to me mostly dropping into the middle of a song, or even off the edge of the record.

Stability is also an issue. Freestanding, with the back leg fitted, the VT-E not only feels  flimsy, but the velvet on the feet means the whole thing slides around a lot when you’re fitting records. I had one new album with a rather tight centre hole, and when I tried to push it onto the spindle I almost sent the VT-E off the back of the rack. This sliding is something I’ve found with all of Pro-Ject’s budget decks, but it’s made worse in this case by the higher centre of gravity and narrower base. 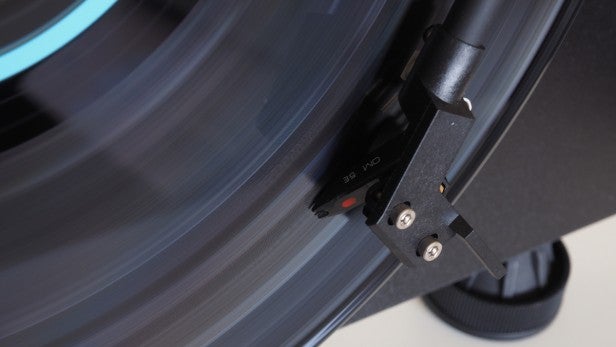 But onto the better news that the VT-E actually sounds like a typical entry-level Pro-Ject turntable. That instability when you’re physically operating it does appear to translate into a little liveliness, though, making it sound similar to the Pro-Ject Elemental, but a little leaner.

The Ortofon OM5e is a warm performer, but always seems a tad laidback for my liking. It offers a meaty mid-range, but less of the agility and excitement of the Audio-Technica AT91 variants that are rife at this end of the turntable market. The VT-E seems to strip away some of that warmth without really injecting much pace. It doesn’t sound bad, but saps some of that cartridge’s strength and doesn’t really deliver the level of sonics you’d hope for at this price.

Perhaps I’m being a little harsh. A listen through The Age of Adz by Sufjan Stevens revealed plenty of detail and a wide, shimmering soundstage – if not the fullness it deserves.

Should I buy the Pro-Ject VT-E?

As a designer object in a room, the VT-E certainly is a conversation starter – even if its ultimately low-end build quality is quickly exposed by a closer inspection. In terms of sound quality, again, there are far worse turntables you could buy, such as the similarly centrepiece-ish Crosley Dansette Bermuda.

The problem is that there are certain quirks that make the VT-E a pain to use. Also, its credentials as a space-saving solution are only really justified if you wall-mount it, which throws up its own problems with how to handle the cabling.

Personally I’d save some cash and buy the Pro-Ject Elemental, which sounds as good, if not better, looks pretty tasty for the price, and isn’t exactly huge.

The quirky design doesn’t have too much impact on sound quality, but the flawed wall-mounting option and usability issues may infuriate you.