The majority of us are used to seeing simulator experiences focusing on all manner of pastimes – driving trucks, performing surgery, being a goat… – but few would imagine spending the day running a prison. After all, the very nature of a penitentiary isn’t one you necessarily equate to fun. Other ideas within the same genre always seem so ridiculous by comparison. Prison Architect takes a much darker approach.

This is inherently why it’s so compelling, though. Designed to be instantly familiar by aping the feel and look of the genre, the game very quickly starts to veer off in its own direction. It all begins when you decide to either work within an existing prison or set up your own, and Introversion Software has skilfully offered up the tools for you to properly go to town. Everything from building the walls around your penitentiary to installing TVs in your inmates’ cells, you have to consider even the smallest detail in order to keep the peace.

As you may have gathered, trying to do that in a house filled with naughty people is easier said than done. Along with hiring the correct personnel to keep the day-to-day as subdued as possible, you have to provide constant management and maintenance, too. Guards need to know where they’re supposed to patrol, new prisoners have to be kept calm and every basic, menial task must be kept up – you can’t have rubbish just filling the yard. 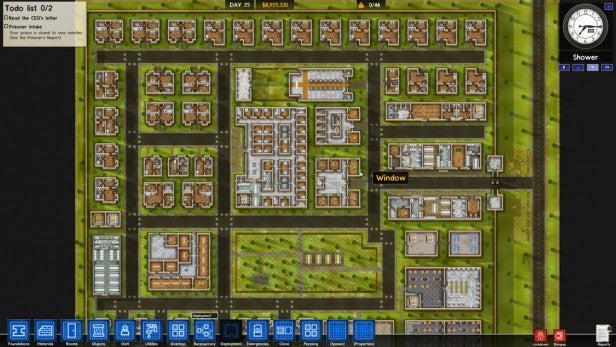 It’s all seamless, though, thanks to how accessible each mechanic is – there’s always the sense that the entire block’s future is in your hands. Much like the classic Theme Park, your aim here isn’t to ‘win at prisons’. It’s just to maintain order and see how long you can succeed before everything goes to pot, which will happen.

Prison Architect is not an easy game – deliberately so. As well as the more mundane aspects that come from running a business – mainly to ensure it doesn’t run out of money – you also have to keep an eye on riots breaking out or detainees threatening fellow cons. It’s not immediately obvious if you’re merely focusing on Prison Architects’ mechanics, but delve a little deeper and you will find some horrendous stories that remind you of what virtual job you’ve accepted.

Related: How Nintendo can survive and thrive with the NX

Given its cartoony look you’d be forgiven for dismissing what’s here as nothing more than video game nonsense. You’d be wrong. The people you’re dealing with are criminals, and as such have a backstory: they need to be punished in a way that fits their crime. This is where everything takes a serious turn, especially when it dawns on you that a man convicted of a double homicide has been sentenced to death. You may not have slammed the gavel down, but it’s up to you to see it out and, yes, that does include building the chamber to carry out said judgement.

It’s horrifically chilling as it is, but the simulator nature adds to that even further. You have to remove yourself from the situation and carry out sentences as the law dictates you should. Sure, it’s not real, but Prison Architect is very good at presenting these things and making sure they’re not taken lightly. 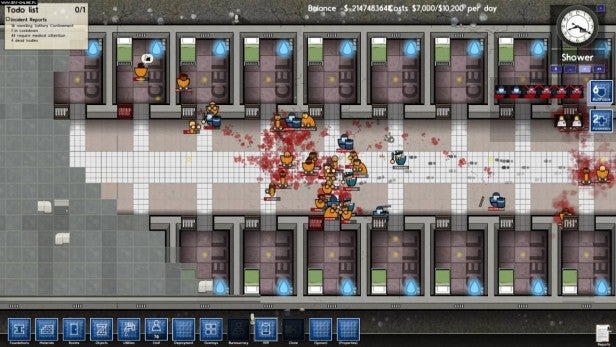 It doesn’t stop there, either. Once again, law breakers aren’t the nicest of people, and while most may be happy to serve their time quietly, others won’t be so ready to play ball. Prepare to deal with situations that are more akin to The Shawshank Redemption than The Sims.

This was all prevalent in the earlier PC version, mind, so it’s to Introversion Software’s credit that they’ve made the move across to console so well. Anything that relies so heavily on a keyboard and mouse always runs the risk of struggling when jumping to a controller, but few will find any issues here. Simplifying its setup to take advantage of the D-Pad and shoulder buttons, there will be a few occasions when you’ll be entering and exiting menus more than you’d like, but even that doesn’t feel too taxing.

While Prison Architect may have been designed for a specific audience that laps this stuff up, Introversion’s dedication to making it feel unique is admirable. Sure, you’ll be micro-managing and fussing over the little things to the nth degree, but there’s a real edge here that keeps it interesting far longer than it may have done otherwise. A solid port and a decent game in its own right, this is a surprise of the year that will keep on giving.

Prison Architect is a solid simulation experience that raises the stakes thanks to pulling no punches when it comes to human beings being locked-up. A surprise treat.