Let’s get one thing clear straight away: if you’re a committed hardcore gamer, a fan of Prince of Persia, and the kind of person who thinks Devil May Cry 3 or Ninja Gaiden were not nearly hard enough, then feel free to disregard the rest of this review. Go out and buy this game ¬– you won’t regret it. For me, however, the third in the Sands of Time trilogy isn’t so much a tale of two thrones, but of three sighs. 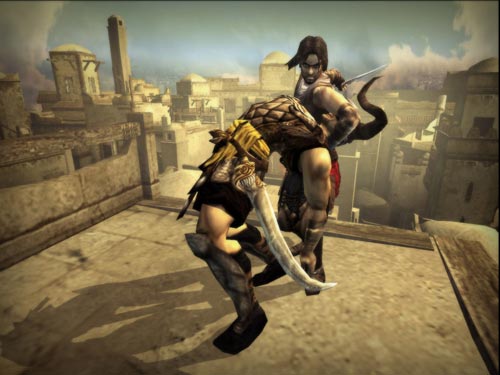 The first is one of relief: the Two Thrones is clearly and unequivocally a huge improvement on its predecessor, The Warrior Within. It’s not a complete repudiation – there are still hints of that game’s gothic stylings and macho posturing – but here, at last, is a sequel that fans of The Sands of Time can embrace. The ghastly metal soundtrack has disappeared, the combat has been toned down, and there is a renewed emphasis on what made the Prince’s first 3D outing great: the sheer joy of his wall-running, pole swinging, chasm leaping acrobatics.


This last point can’t be made enough. Apart from Mario 64, I can’t think of another game that made movement through 3D space so enthralling, and in The Two Thrones the magic is definitely back. The new setting – the Prince’s home city of Babylon (under occupation from a fiendish unknown force) – is like an enormous playground for the prince’s athletic escapades. Grand palaces full of high balconies and fiendish traps? Check. Dank sewers populated with monsters? Check. Narrow streets packed with poles to swing from and walkways to traverse? Yep, them too. What’s more, the Prince has added to his roster of moves. He can now leap into spaces between two walls and slide down, jab a dagger into a plate to gain a purchase for a second, or use special spring plates to make enormous, diagonal jumps. The result is a game where smart, context-sensitive controls and stunning animation combine to form a beautiful, flowing sequence of runs, leaps and swings that make you feel like Douglas Fairbanks Jnr. or Errol Flynn (or whoever the modern day equivalent might be). 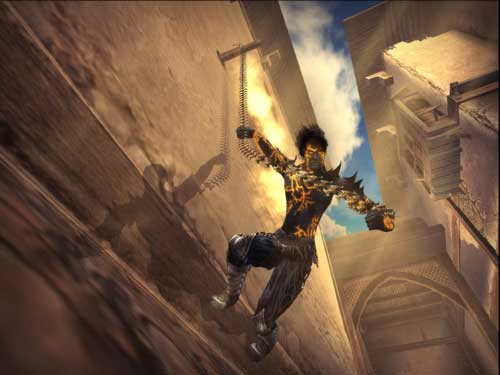 It’s also a game that feels built to mend the faults of its predecessors. The repetitive, drawn out combat that marred The Sands of Time was only made worse by Warrior Within’s combat-heavy design, and finally Ubisoft has done something to make our lives that little bit easier. That thing is the new ‘speed kill’ system. Get into position behind or above a baddie and the screen flashes with a weird blurry, iris-in effect. Press the right buttons in the right sequence at the right time, and you can finish off your enemy before they have a chance to retaliate. Early on, this just seems like a flashy way of avoiding the regular scraps, but believe me: in later stages ‘speed kill’ will become your new best friend. It helps you narrow down otherwise impossible odds, and prevents you getting bogged down in tiresome, run-of-the-mill fights. It’s one of those enhancements that really does alter the flow and pacing of a game for the better. 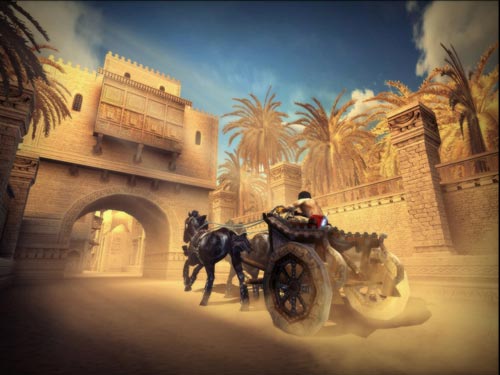 Pacing was obviously a concern for Ubisoft, as there have been real efforts to spice the action up with chariot-racing interludes, heavily-staged boss battles and sequences which see you in the form of the prince’s demonic alter-ego, the Dark Prince. Now, while we love the “Dukes of Hazzard” slow-mo jumps, the chariot races are spoilt by the tendency of one wrong move to send you back to the start of the section, but the Dark Prince bits are simply ace. Your new form isn’t just faster and stronger than the standard-issue Prince; he comes complete with a cool, God of War-style chain weapon, which comes in handy when dismissing larger groups of baddies and also enables some new acrobatic feats. Of course, the Prince isn’t short of tricks of his own – you can still use the sands to turn back and slow down time, giving you a vital chance to cheat death just as it seems most inevitable. 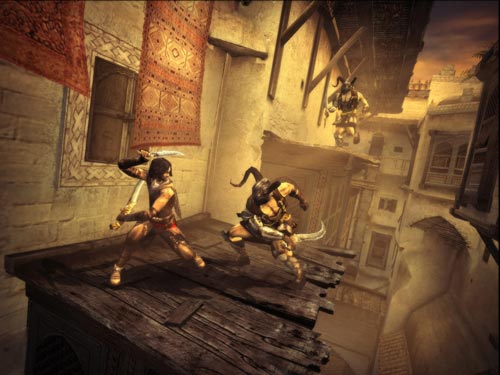 When all the good stuff comes together – the daring runs high across the rooftops and through the streets of Babylon; the dark prince slicing and dicing his way through guards and monsters; the prince sliding down a chain to deliver a ‘surprise’ to the guard below – it’s time for a deep, cheerful sigh of satisfaction. In a year that’s seen a dearth of decent platformers, The Two Thrones seems a wonderful reminder of just how engaging the genre can be.

Admittedly, there are signs that the prince is showing his age; on the Xbox the prince still looks like a PS2-friendly compromise, and some of the environments lack detailed décor or variety. Yet The Two Thrones produces real moments of wonder and vertiginous majesty. At times the views across Babylon’s rooftops are breathtaking, while the fierce warriors who oppose you, warped and bestialized by the sands of time, are a huge improvement on the more generic foes of the original. Best of all, you have to love the way The Two Thrones takes the disparate strands of Sands of Time and Warrior Within and tries to weave them into one coherent whole, bringing back old flames like The Empress and Farah, while trying to recapture some of the original’s exotic grace. 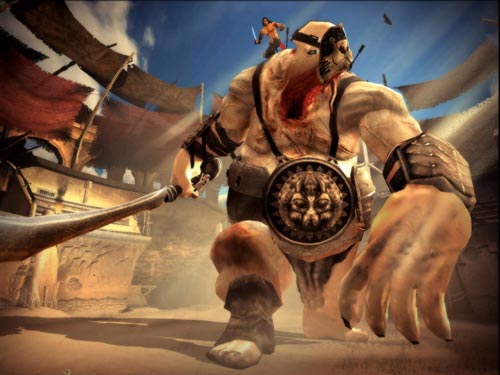 Sadly, though, there’s still one sigh to come, and it’s a long, bewildered sigh of sheer exhaustion. While the new speed kills help, The Two Thrones still suffers from the same problem that has always blighted the prince: frustration. At several points I’ve had to drop the controller, switch off my console, and walk straight out of the room before something got damaged. I’ve used swearwords that would have made Eddie Murphy in his eighties heyday blush.


It’s not that The Two Thrones is a constantly obstructive game. For the most part, the difficulty level is well judged; with evenly placed save points and sensible check points in-between. When you mistime that jump or throw yourself off a pole in the wrong direction you usually have only a few minutes of gameplay to repeat, and the ‘rewind’ button can pull you out of most minor scrapes. However, when The Two Thrones gets it wrong it gets it really, badly wrong. The game starts throwing regenerating guards and monstrous, sand-stealing hell-hounds at you, and you find yourself repeating the same ten minutes of gameplay over and over again until, by some incredible fluke, you get things right. I don’t call this an enjoyable challenge – I call it a waste of my time. After a while, one option on the Quit/Retry menu gets a whole lot more tempting, and it’s not the one that takes you back for more. 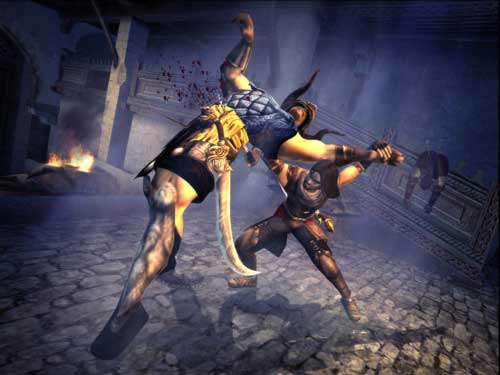 And that’s a shame, because the further you get on, the more enjoyable and involved The Two Thrones gets. Existing fans will want to reach the end of the Prince’s twisting tale, and even newcomers will appreciate how enjoyable the basic game dynamics can be. Those of a temperamental disposition, however, should think again. A racing pulse might be a good thing, but boiling blood’s another matter.


The Prince returns to form, but patches of frustration spoil the adventure. Maybe persistence is a great Persian virtue, but you’ll need plenty of it to reach the story’s end.