Few gaming series can boast about even one title that helps redefine a genre. Fewer still can lay claim to two. With the latest installment, Prince of Persia comes pretty damn close to doing it for a third time. Some might not like the new direction while others will pick holes in the execution, but you can’t say that this is a series that lacks ambition.


The original Prince of Persia took the 2D platform game, added realistic and (for the time) cinematic animation, and developed the sort of tricks, traps and puzzles that games like Tomb Raider would later rely on. Then, Prince of Persia: The Sands of Time made the formula work in 3D, with a beautifully realistic control system and a superbly implemented time control feature that, in a flash, made Tomb Raider and its clones seem fiddly, dated and frustrating. The new Prince of Persia takes this to a whole new level. In a way, this does for the platform-action game what Fable II did for the action RPG. It’s a game that bends over backwards to accommodate and entertain even the most casual gamers, yet doesn’t do so at the expense of those of us who’d consider ourselves enthusiasts. And while it’s doing all this, it delivers one of the most magical game experiences you’ll have had all year. 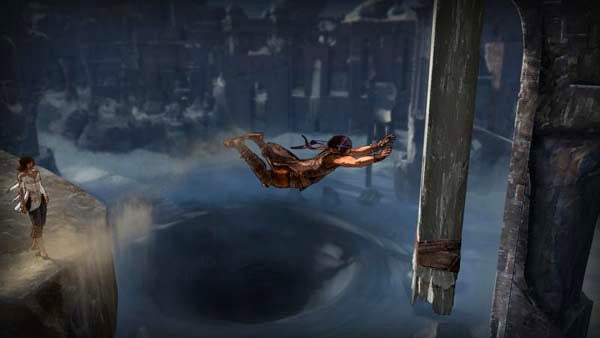 Rebooting the franchise from scratch, as Ubisoft has done, turns out to have been a smart move. Throwing out the old Prince, the old visual style and much of the old control system has given Ubisoft the freedom to re-imagine everything and create a game where every element works like a cog in a beautifully engineered piece of clockwork.


The cel-shaded visuals are hardly revolutionary, but the combination of huge draw distances, sumptuous lighting, incredible architecture and fantastic character detail makes for arguably their strongest implementation yet; imagine Disney’s Aladdin reworked by WETA and Studio Ghibli and you might get some idea. In stills it can look slightly odd or artificial. In full, fluid motion it’s absolutely gorgeous. 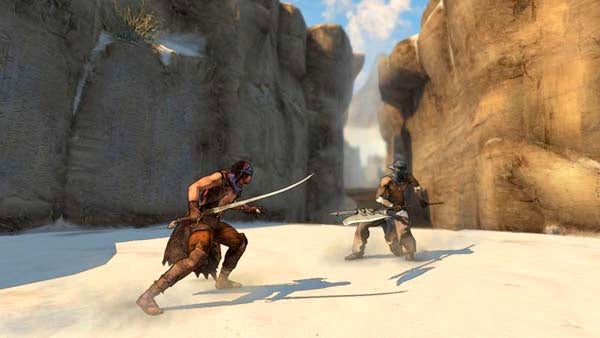 The hero’s animation is beautifully smooth, but then you could say the same thing about the control system. Where the controls in the Sands of Time trilogy grew increasingly complex, here all the wall-running, jumping and clambering is stripped back to simple presses of the A, B and right trigger with the emphasis more on timing than precision fingerwork. At first, more experienced gamers might actually find this counter-intuitive – I kept on pressing more buttons than I needed to in the first hour of play, and so kept falling to my doom. After a while, however, you settle into the game’s rhythm, and when you do it’s totally exhilarating. Prince of Persia doesn’t quite match the extreme adrenaline rush of the best sequences from Mirror’s Edge, but the actual flow of action from platform to pole to wall to slide to platform is much less stop/start. This is a game that just feels right.

I think the reboot also benefits from two bold choices. First, Ubisoft decided to take it more open world. Don’t worry: Prince of Persia hasn’t gone in an Assassin’s Creed direction, but the linear sequencing of levels has gone in favour of a sprawling, ruined city radiating out from a central desert temple hub. With certain limitations you can tackle the available areas in several different orders or move from one into another as you wish and at no point will you come across a loading screen. Just as importantly, this world feels like it has been built and tested and polished and retested and repolished to ensure that it’s a joy to make your way around. Prince of Persia has some staggering set pieces – escapes from collapsing buildings, wild rides up the side of a colossal tower – but the bits that come in between are just as enjoyable. Where Mirror’s Edge had the core gameplay sorted but couldn’t deliver environments that really made the most of it, Prince of Persia has both working together in perfect synchronicity. 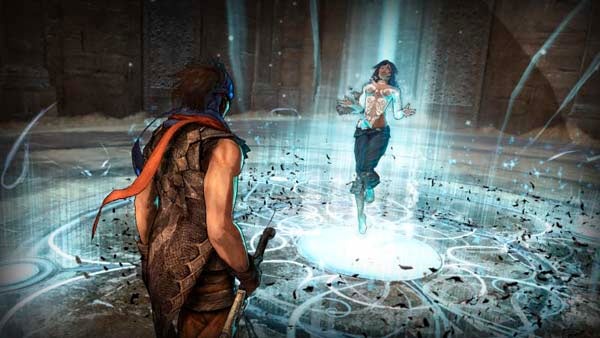 The second choice is more controversial. When the team at Ubisoft announced that the hero would have a female co-star, Elika, they took pains to make it clear that she would assist, and not annoy. They weren’t just whistling Dixie. While she follows you at all times, there never comes a point where you have to risk your own safety to keep her behind you. Because she has magical powers, she’s always there, swinging and clambering along with you. She’s handy too. Tapping Y in the middle of an impossible leap calls her in to sling you through the air for what’s effectively a double jump, while doing the same in combat gets her dishing out a few crucial, magically-enhanced blows. Most importantly, Elika ensures you can’t die. Fall, and she grabs you and drags you back to the last safe spot. Take a battering in combat, and she stops your enemy and gets you back on your feet. The overall effect is that, just as you never see a load screen, you never see a reload screen either. 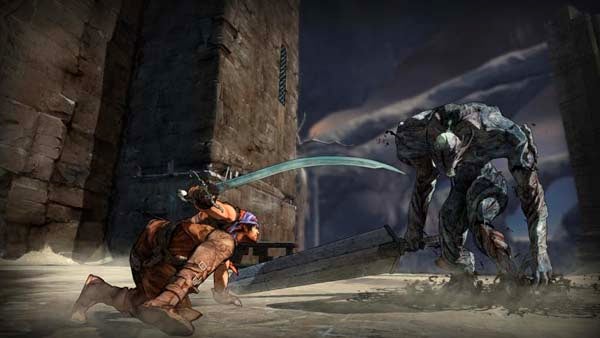 For some people this will have a negative effect on the game. From one point of view you can see Prince of Persia in the same vein as Bioshock or Fable II – a game that ‘dumbs down’ a slightly hardcore genre for mass market acceptance. There’s a good chance that anyone who would describe the – in my opinion – excessive difficulty level of Prince of Persia: The Two Thrones as a satisfying challenge will find this Prince of Persia rather too easy-going. In fact, you could even say that the revamped controls can make you feel like you’re not in full control. I’d argue differently. 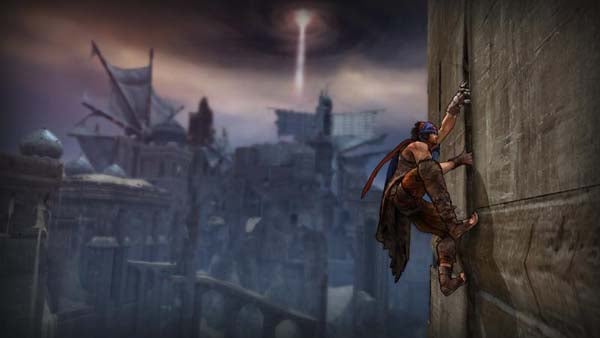 For me, Elika takes the frustration out of the experience and allows you to concentrate on exploring and experimenting, finding new routes and new areas and just enjoying the ride. There’s still enough skill in timing the moves to make you feel like the acrobatic hero, but you’re rarely playing the same five minute stretch over and over and over again because you can’t make that final, fearsome jump. Prince of Persia isn’t just a game you want to complete; it feels like a game that you will complete – and I couldn’t always say the same about The Two Thrones. 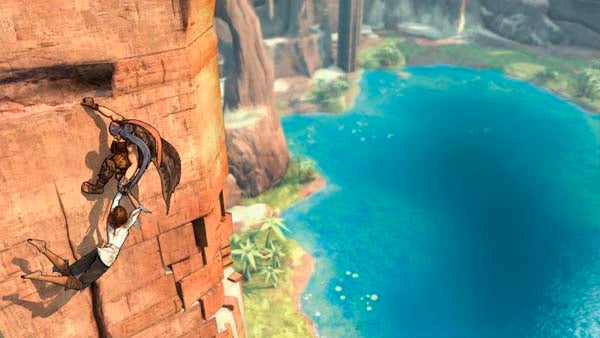 Elika’s powers are also key to how the new structure works. Basically, the hero and the princess are up against an ancient, evil god, barely restrained by a series of ‘fertile grounds’ that give life to the city and keep him firmly under foot. Sadly, a disastrous choice by Elika’s father has allowed this god, Ahriman, to unleash his dark force, an inky filth known as ‘the corruption’, on the world. Basically, our heroes have to get to each fertile ground and reawaken the energy stored there, replacing the corruption with life (in an effect that will be familiar to fans of Zelda: The Twilight Princess or Okami). However, while the first few grounds are easily accessible, the remaining sites require Elika to master four additional powers. These allow Elika and the hero to run up vertical walls or take flight from certain pads, but to gain them you need to gather light seeds and take them to the central temple. Unfortunately, these light seeds only appear when an area is cleansed of the corruption.


Were I feeling mean, I’d say that this was a cheap way to extend the game’s lifespan by forcing you to redo sections you’ve already done, but in fact I’d go the other way: gathering light seeds gives you a reason to really explore areas you’ve earlier rushed through, and each has enough secret pathways to make the effort worthwhile. What’s more, the levels – all rather dark and cold when under the influence of Ahriman – are just beautiful when restored to their natural state. When you get to a high spot and gaze far across the city, looking at the windmills of the construction works or the high towers of the palaces, the impact is simply breathtaking. 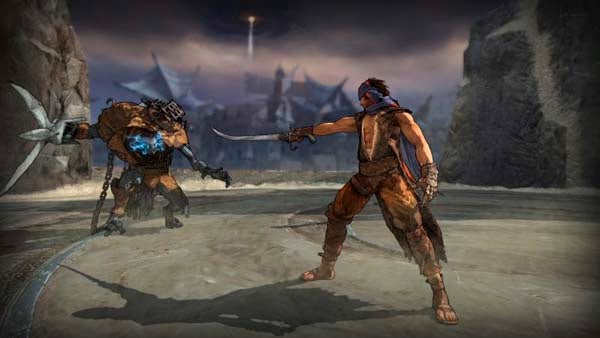 I’ll come straight out with it: I love the new Prince of Persia. It’s beautiful, engaging and superbly entertaining, and the plot and characterisation work brilliantly. Admittedly the hero starts off as a slightly irritating character, but he soon develops into a more interesting Han Solo-style rogue. And while his relationship with Elika doesn’t have the poignancy you get from the more protective link in Ico, it still adds a real warmth and personality to the game. The open structure has consequences in terms of maintaining some progress in the difficulty level, but the game gets around this by introducing new elements of corruption like poisonous clouds or grasping tendrils that make otherwise easy stretches that bit more tricky. For most complaints you think you can see coming, Ubisoft’s team has found some way to head them off.

Sadly, there remain a few minor reasons to grumble. The first comes down to that old Prince of Persia bugbear: combat. Ubisoft has wisely downgraded its importance from Warrior Within and The Two Thrones, and the tremendously irritating mass scraps of old have been replaced by tense, one-on-one duels. The actual fighting system works reasonably well, and there are some nice touches like ‘state changes’ where your enemy becomes invulnerable to all but one type of attack. However, after a while fights develop along two strands. Either you use a pitifully simple combo to dispatch your enemy in seconds, or you spend five minutes or more wearing the tricky git in question down while he wallops you every instant you let your guard down. The more the game progresses, the less fun the fighting gets. 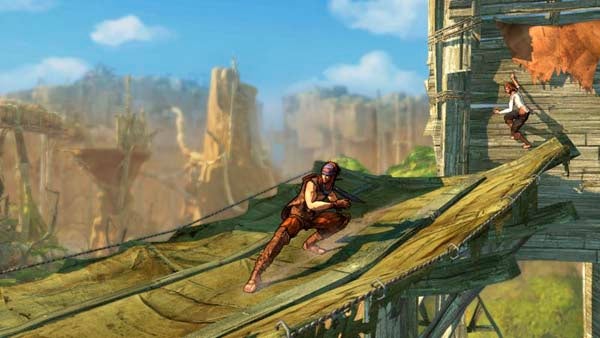 And this also affects the game’s boss battles. The game has four major villains supporting Ahriman, and each turns up several times during the game before you face them down in one climactic battle at their stronghold. Each boss has its own personality and idiosyncrasies, and you can sense that the game is building them up as strong opponents so that it’s all the more satisfying when you finally defeat them. However, the methods of doing so grow ever more ornate and the repetition gets a little wearying. For me, the final battles turned into wars of attrition, with the speed and vigour of enemy attacks making the game’s deep combo system almost unworkable, and our hero instead relying on regular resurrections while he slowly chiseled away at the enemy’s health. Maybe I just never fully grasped the intricacies of the combat system, but this stuff slowed the game down a little too much for me. 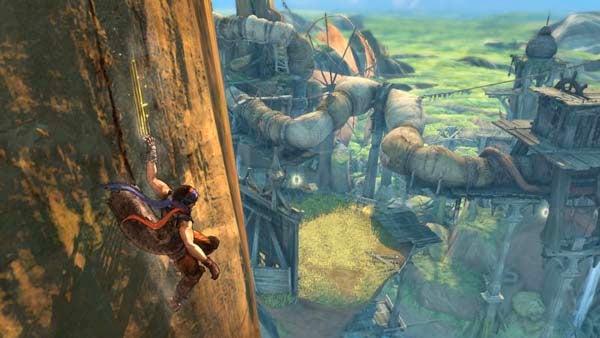 This isn’t a disaster, and neither is my second minor whinge – the limited number of puzzles. Sands of Time, with its ingenious time control mechanics, had some fantastic examples, and even The Two Thrones had a few good brain-teasers. In this Prince of Persia we only get a handful, and none of those are particularly memorable. It’s a shame that there isn’t a little more smart stuff to go with all the swashbuckling, wall-running, pole swinging stuff that makes the game so great, but – lest we forget – even The Sands of Time had its share of flaws. Forget Tomb Raider: Underworld, forget Mirror’s Edge, forget Ninja Gaiden 2. This is the best action-adventure of the year, and unless you demand a seriously hardcore level of difficulty, there’s really no good reason to miss it.


A spectacular rebirth for this great action-adventure series, and one that’s built for just about everyone bar the most hardcore gamer to enjoy. It has a few flaws, but after the mild disappointments of The Warrior Within and The Two Thrones, the Prince is back to being the stuff of legend.