What is the Prestigio RoadRunner 565GPS?

The RoadRunner 565GPS is a dashboard camera from a company you may not have heard of called Prestigio. However, this is no tiny startup, but a brand that is part of Belarusian-founded ASBIS, a multinational corporation with a two trillion-dollar annual income.

While Prestigio has been focused on Eastern Europe and the Middle East for most of its existence, its products are beginning to filter into the UK. The first to grace the TrustedReviews testing bench is the RoadRunner 565GPS dashcam.

First impressions are positive: the 565GPS offers a solidly constructed, if unorthodox, design. The casing is essentially tubular, but with an octagonal cross-section. A two-inch display juts out on one side, with two silver buttons to the left and four black ones underneath. The strangest design flourish is the indented ridge on one end that makes it look like a removable cap – but it isn’t. The design has a military air about it, and I kind of like it.

Strange design notwithstanding, there’s plenty to like about the 565GPS from the point of setting it up in your car. Most dashcams I’ve tested aren’t really meant to be taken out of the car when not in use, which concerns me a little when satnavs are such an attraction to theives. 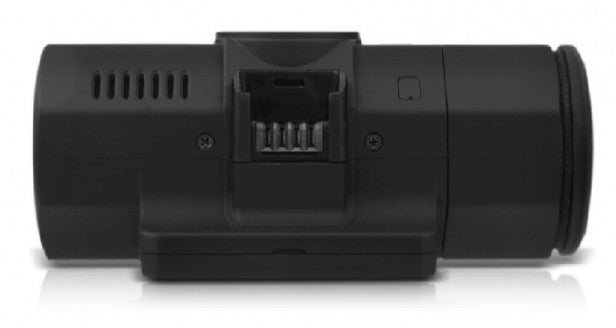 The 565GPS, in contrast, comes with a quick-release mount. This includes electrical connections, so there are no wires to connect. The car power adapter attaches to the mount, which has the GPS receiver built in. The mount is designed to sit at the top of your windscreen, as are most dashcams, and the power cable is very long, so it can be routed round your windscreen.

However, the power cable ends in a permanently connected cigarette-lighter plug, so you’ll need a second power output – a socket splitter, for example – to use the 565GPS alongside a satnav. Some newer cars do come with dual power connections or additional USB power, but many do not, and there’s a good chance you’ll want to operate both the camera and your satnav at the same time.

The 565GPS has a promising internal specification, with a decent-sized 1/3-inch CMOS sporting 3-megapixels inside. The Ambarella A7LA50 chipset takes full advantage of the pixels available to offer video resolutions up to Super HD (2,304 x 1,296) at 30fps, although Full HD (1,920 x 1,080) and 720p can also be selected at this frame rate. 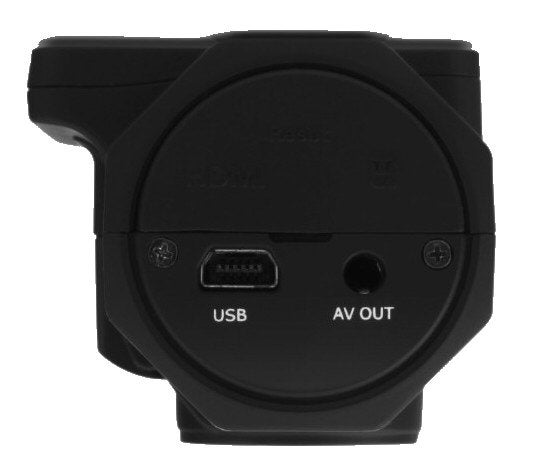 Video is recorded at around 18Mbits/sec, so a 16GB Flash memory card will suffice for about two hours of footage. Note that there’s no storage included in the box, so you’ll need to add this to your budget. A microSD card slot and mini-HDMI port can be found behind a rubberised cover on one end of the device, but the mini-USB port and analog AV out mini-jack aren’t covered.

By default, video will be recorded in a loop, so that when the storage is full, the oldest files will be replaced by new ones. There’s a built-in G sensor, for which you can set the sensitivity. When the G force in your car goes beyond the threshold, the 565GPS will assume this is an incident – a collision or other accident – and mark the files accordingly.

You can set the car number plate so this can be recorded with the video, and burn date, speed, and position information onto the video file itself.

Like a number of recent dashboard cameras, the 565GPS includes a selection of additional safety features alongside creating a video record of your journey. There’s a setting whereby the camera will trigger if motion is detected. The rather small 280mAh on-board battery then has a life of 20 minutes to record whatever is going on ahead.

I’m not sure how useful this will be if someone is stealing your car, since they’ll have stolen the camera too. But it could catch someone who backed into your vehicle in a car park, although – as mentioned earlier – I wouldn’t recommend leaving the camera in the car anyway, since it could tempt the theft it’s intended to prevent. 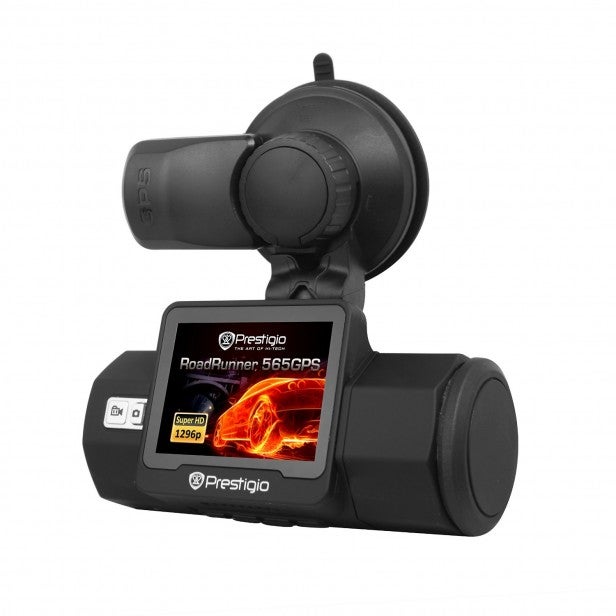 There’s a lane-departure warning system (LDWS) available, which detects the lines either side of the lane and will beep if you stray out of these. To make this operate optimally, there’s a calibration system so you can lock the camera onto the correct orientation. The LDWS will kick in only above 60km/h, so you won’t constantly hear beeping as you manoeuvre around town.

In fact, I didn’t notice it warning me at all when I had turned it on, leaving me unsure if it was working. There isn’t a collision warning system available, either. However, these safety features are there because they can be, and I’ve not found them particularly useful in any of the dashcams I’ve tested so far.

You can view the MOV-format 565GPS video files on any system that can read this type of file, either by slipping out the memory card or attaching the device via USB. I was reasonably impressed by the image quality in bright lighting, which displayed a good level of detail – certainly enough to read the number plates of cars in close proximity.

You can view some sample footage from the Prestigio RoadRunner 565GPS here.

You won’t want to record your holidays on this camera, but it’s certainly more than adequate for the job intended – at least in good illumination – and there’s a Wide Dynamic Range setting to improve detail in dark regions and highlights. In low light, performance isn’t quite so stunning, with grain obscuring detail, but overall image quality is better than most dashcams I’ve seen. 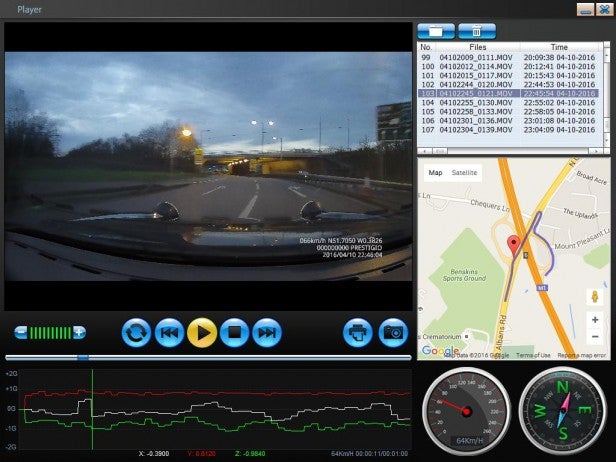 On the CD you’ll find the obligatory player software with the ability to read the stored GPS information and show where the footage was taken on a map loaded from Google, including the route depicted by the current file. This also presents a graph with G-force information, so you can analyse your driving in detail.

Should I buy the Prestigio RoadRunner 565GPS?

The Prestigio RoadRunner 565GPS is a promising little device. Image quality is decent and the price is reasonable. The quick-release mount is also fairly unusual in the current market, and a welcome feature.