Let’s talk inclusivity. Most of us believe that it’s a good thing, and if so it’s hard to think of another game that works so hard to be inclusive as Poochy and Yoshi’s Woolly World. I’m not necessarily talking about its wide appeal or its cast of multi-coloured, hand-knitted heroes, but about the fact that this is a game that just about anyone can play, improve at, complete and enjoy, yet that has enough depth to keep devotees of the 2D platformer happy.

Provided you don’t actually hate cute dinosaurs and their high-jumping, foe-swallowing antics, or you’re not an apologist for the Bowser clan, you’re pretty much guaranteed a great time. You can’t get much more inclusive than that.

This is a 3DS remake of the Wii U’s Yoshi’s Woolly World, a classic 2D platformer from the same mould as New Super Mario Bros or the classic Yoshi’s Island, only rendered in a rather lovely hand-crafted style. Everything from our hero to the scenery to the Koopa Troopas and Petey Piranhas appears to have been knitted together from yarn.

This gives the game a little of the hand-crafted style of a LittleBigPlanet, while the gameplay plays in to the conceit. Where the old Yoshi of Yoshi’s Island could grab enemies with his tongue, suck them in and excrete them out as throw-able eggs, Yarn Yoshi turns them into one long strand of wool, then dumps them out the other end as a ball. Loose threads in the scenery can be sucked in to open secret areas or handy passages, while whole sections can be squashed and shifted to find still more. 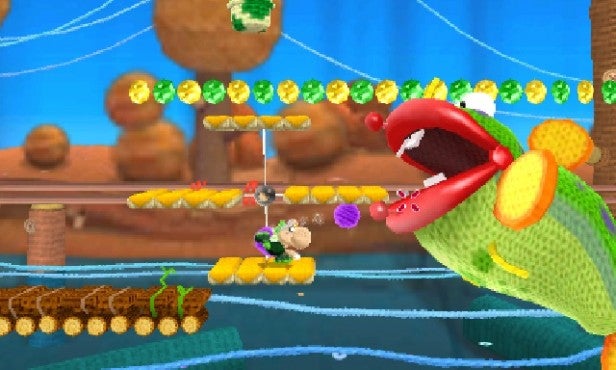 Now let’s talk difficulty. Yoshi has always been the most forgiving to control of Nintendo’s heroes, thanks to a handy double-jump and a glide manoeuvre which sees the little dino straining to reach a missed platform, and those handy eggs (now woollen balls) which he can blast out to activate switches or eliminating enemies. While targeting your yarn balls can be tricky, with one squeeze of the shoulder button starting a moving reticule, the next releasing your payload, movement is anything but. If you’re looking for a great My First Platform Game for kids, a Yoshi title always makes a great choice.

Yoshi’s Woolly World was never going to be the Dark Souls of 2D platformers – see the surprisingly fiendish Donkey Kong Country: Tropical Freeze if you want some of that – but Nintendo made it even more accessible with a switch-in, switch-out Mellow Mode, where Yoshi gains a pair of wings with which he can practically float across gaps and over perils. What’s more, it threw in a system of unlockable Power Badges, which you could buy with gems and use to boost attacks, toughen Yoshi up or protect him from death by falling. Switch on mellow mode, use a Power Badge and you could practically swan through many levels. See why they call it Mellow Mode?

Now, some people either didn’t get the point or weren’t paying attention, and complained that the Power Badges and Mellow Mode made the game too easy and some kind of affront to the serious Mario fan. Bad news, guys, but on the 3DS Nintendo has now made things even easier, with the addition of the new Poochy Pups. These cute little chaps – smaller versions of Yoshi’s canine sidekick, Poochy – will follow you around while you’re in Mellow Mode, acting as re-usable yarn balls for shooting then hovering around to point out secrets. They’ll even gag upcoming Piranha Plants so they can’t get you.

On top of this, buy the version with the Poochy yarn Amiibo, and the pooch himself will appear to help Yoshi out, given just one tap. Sadly, we didn’t get the little woolly scamp to try this out. 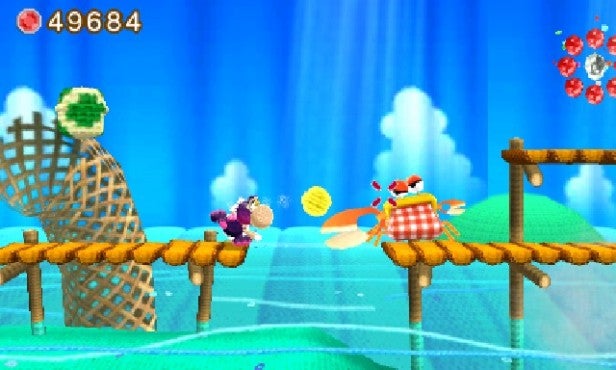 Basically, turn on Mellow Mode and practically anyone will be able to finish any level as long as they develop a little skill, exercise some patience and are prepared to learn the mechanics as they play. That’s great news for younger gamers, less-experienced gamers and those who tend to give up when things get tricky, but it doesn’t mean that Woolly World has nothing to offer the rest of us.

For one thing, the team at Good Feel – makers of the earlier Kirby’s Epic Yarn – aren’t short of ingenuity or level-design expertise. Levels have you clambering around on mobiles from a giant children’s nursery, leaping from rug to rug as they unfurl in the sky, or taking rollercoaster rides on high-speed drapery. Interludes transform Yoshi into a gliding umbrella or the star of a scrolling shoot-’em-up.

One level may have you wrecking the scenery on the back of an excitable Poochy, spitting out fluffy chicks to form traversable trails of vapour, or using the wilfully destructive nature of a yarn-covered Chain Chomp. Another has you rolling enormous snowballs or handling platform-changing spectral curtains in a ghost house. No one level is exactly like another.

What’s more, simply getting through the game’s six worlds isn’t really completing the game. Each level has a selection of collectible yarn balls, coins and flowers, and you’ll need to collect the latter to unlock the secret level in each world. These are hidden in all kinds of ingenious places that you simply won’t spot on your first time through, turning Poochy and Yoshi’s Woolly World into something that’s as much about noticing anomalies and solving puzzles as razor-sharp reflexes and precision timing. Turn Mellow Mode off, say no to Power Badges, and Yoshi’s Woolly World has the stuff to satisfy old-school Mario fans. 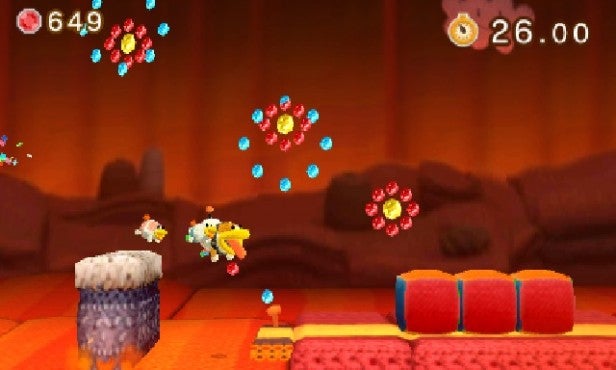 Any complaints? The boss battles are good, but not so good that you want them repeated, which makes it a shame that bosses and mini-bosses get recycled for a slightly more difficult second encounter later on. The visuals also suffer a little on the 3DS hardware, just because the GPU and screen can’t give you all the rich woolly textures that made the Wii U original look so special. That said, this is still one of the 3DS’s finest moments, with some great use of 3D to make up for the loss of definition.

The biggest disappointment is that the excellent co-op mode of the Wii U original has gone. The 3DS version tries hard to make up for it, though, with facilities for hand-crafting your own Yoshis, plus a series of fun, unlockable stop-motion animations and – most importantly – the all-new Poochy Gold Rush mode. This gives you a series of levels transforming Woolly World into an endless runner, with Poochy dashing left to right at a breakneck pace, leaping onto platforms and over obstacles on a quest for gold and gems – you can spend these on more Power Badges in the main game.

The levels are short but great fun, and Good Feel has added replay value through a range of missions that unlock once you complete each stage for the first time.

If you missed out on the original Woolly World, don’t make the same mistake on the 3DS. This is a beautifully made, brilliantly designed 2D platformer with lots of charm and some fantastic levels. It gives Mario’s dino chum his best outing since the original Yoshi’s Island 20 years ago.

The Poochy Pups and Poochy’s Gold Rush can’t quite make up for the lost co-op mode, but this is a platform game for everyone – accessible enough for the least-skilled gamer while packing in a challenge for more experienced fans. It’s a thing of joy.