What is the Polti Vaporetto Airplus?

The Polti Vaporetto Airplus is a cylinder-style steam cleaner with a design very similar to the Vax S6S Home Pro Compact Steam Cleaner. It has a large number of tools, stored on board, and a deodorant tank.

Steam is variable and well-judged: enough to lift dirt without leaving floors and furniture soaking wet. 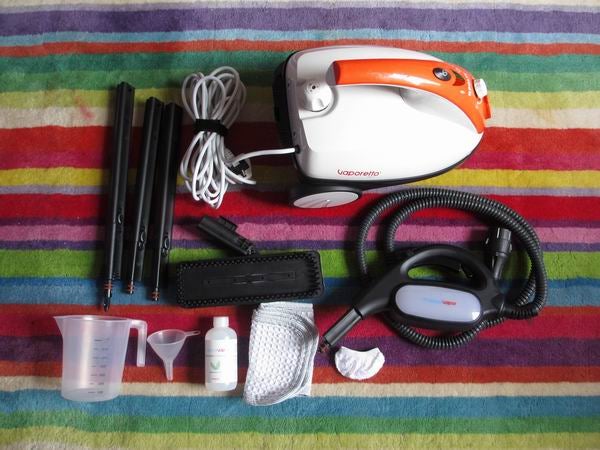 The Polti is compact and portable – it follows you around on wheels and is light enough to lug without complaint. It comes with three extension tubes that give flexibility (you can use all three or just one or two) and a long reach.

Its cylinder design is very similar to the Vax S6S. But where the Vax stores its tools at the back, the Polti has a large tray of tools hidden underneath the body of the cleaner. Tools include a concentration nozzle, two angled nozzles, two brushes, a brass brush, a small cleaning head and a window squeegee. There are pros and cons to the onboard tool storage – the Vax has fewer tools but they’re easier to access. 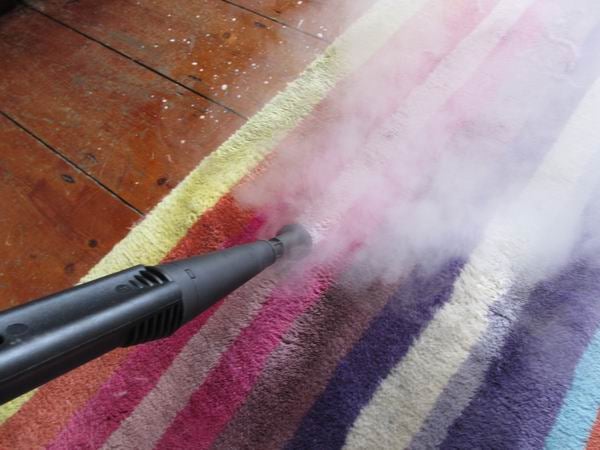 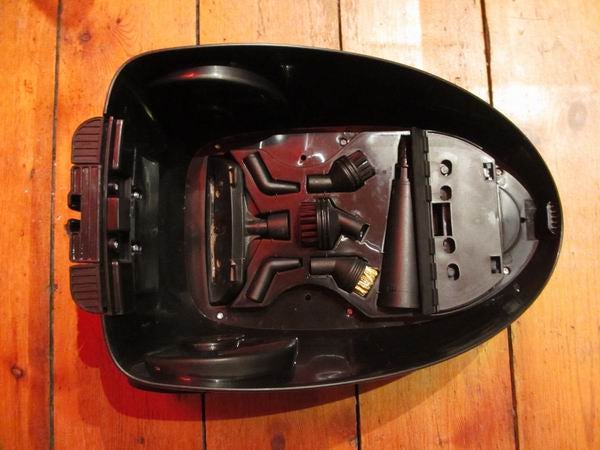 Assuming you attach the extension tubes and big cleaning head to the Polti, there’s not much left that can’t be stored on board. There’s also a loop of Velcro to keep the power cable tidy.

The other similarity is the deodorant tank built into the Polti’s handle (the Vax has a similar one for detergent). You can fill the Polti’s tank with pine-scented FrescoVapor perfume that claims to neutralise odours rather than mask them. A controller on the handle lets you choose how much, if any, of this to use as you clean. 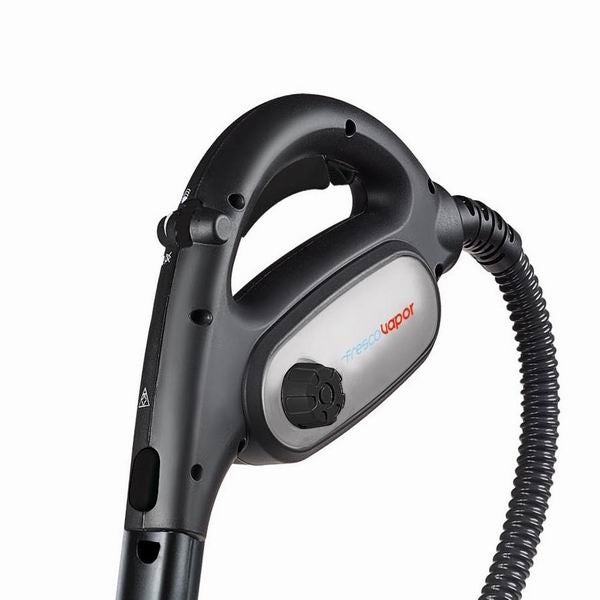 You fill the Polti with water, using the supplied jug and funnel, screw on the safety cap and wait. It takes a few minutes to bring the water up to the boil. A light indicates when it’s ready. And it’s worth the wait because it then supplies a decent constant steam.

The steam is variable, controlled with a knob on the body of the cleaner. It’s not stunningly powerful… and yet it is enough to do the job – everything from mopping to lifting grime. The large cleaning head comes with a waffle cloth for cleaning hard floors. This is held securely in place by clips on both sides of the cleaning head; you could use any cloth that’s the right size in its place. 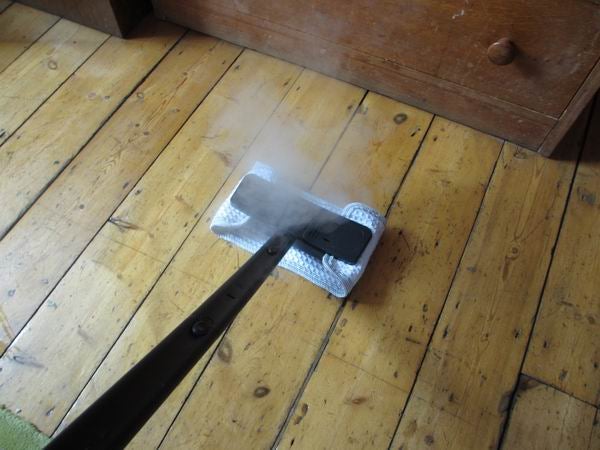 With the cloth in place, the large cleaning head does an effective job of steam mopping – there’s enough steam to lift dirt but not so much that the floor is drenched. Using it without the cloth to clean a rug was less successful though – it was good at picking up fluff but it didn’t glide well, so pushing it around was quite an effort.

Using the small brush and towelling cloth to clean a mattress was a revelation. The mattress looked clean but it was shocking how much dust it lifted, presumably dander from skin… perfect fodder for dust mites. The sight would turn anyone into an advocate of steam cleaning. 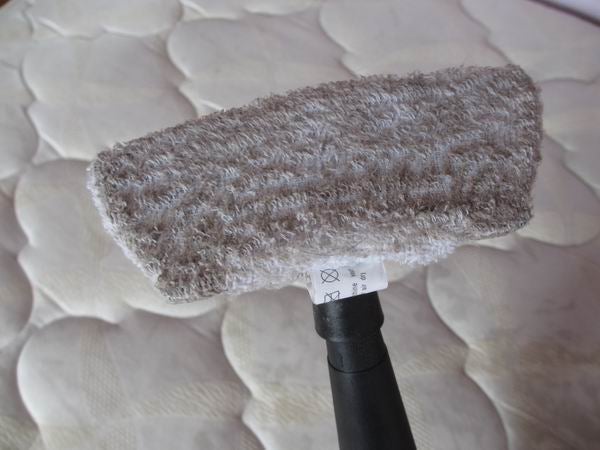 There are a wide range of small tools stored on board and the trigger has a safety lock. This is great for when you change tools as you won’t accidentally steam your fingers. These are both next to each other on the handle.

The handle is also the place to control deodorant. It’s adjustable – you can fill the deodorant tank but use as much or as little as you like. We found it unnecessary for most tasks but useful for spot-cleaning ground-in dirt where, despite being billed as a deodorant, it acted as a detergent.

The onboard storage is excellent, with one caveat. It’s been designed to fit the tools so perfectly that if you get one even slightly out of place the cleaner won’t clip down properly. Still, it’s a huge improvement on carrying a bag of steam nozzles round the house.

After cleaning, the Polti packs away well for storage. But if you want to empty the water tank you need to release the pressure first. You can achieve this either by leaving it to cool for 10 minutes or, if you’re in a hurry, by letting steam out until the button on top of the safety cap can be depressed. 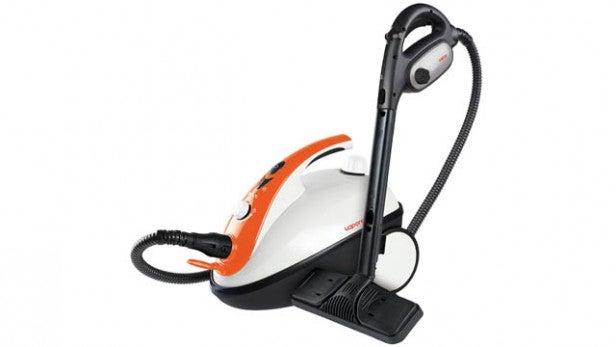 Should I buy the Polti Vaporetto Airplus?

Yes, if you want a cylinder steam cleaner that deodorises, it does a good job. The other model worth considering, with similar features, is the Vax S6S Home Pro Compact Steam Cleaner. Alternatively, if you don’t need the detergent tank, save money and get the Polti Vaporetto GO instead.

This compact, well-designed cylinder cleaner lifts dirt and deodorises as it steam cleans.