What is the Polti Forzaspira MC330 Turbo?

Long-standing Italian brand Polti is best known for its steam cleaners and steam irons, but also features a bagless vacuum cleaner in its range – the superbly named Forzaspira MC330 Turbo. Vacuum cleaner or Italian supercar? We had to check in the box to find out.

This chunky bagless cleaner offers a 700W A-efficiency motor, a capacious 1.8-litre bin and four stages of filtration for cleaner exhaust air. You’ll find electronic controls on the handle, beautifully made telescopic tubes and plenty of tools too.

The Forzaspira is a mid-priced bagless cleaner with plenty to like. It comes to the party with impressive style, a packed feature list and a tool for almost every occasion.

On the metallic-green body there’s storage for the crevice tool and a combined upholstery/dusting brush. Both are on the small side but usable nonetheless They’re nowhere near as bijou as some micro-tools we’ve tested of late.

Between these two tools sits the huge bin and cyclone, easily removed using the release clip at the rear. The bin is a whopper, holding a good 1.8-litre of dirt and dust and easily emptied through a rounded lower flap. For a more thorough bin clean, the top section removes and the cyclone slides out completely.

The 1.4m-long hose clips easily yet securely to the body, and ends in a rather fancy pistol-grip handle with remote controls and indicator lights. This is powered by the two AAA batteries supplied, which fit into the handle.

Interestingly, the remote control is infrared (like your TV remote) so signals can be blocked if you put your hand over the emitter on the handle. In use, the IR signal bounces off your walls and ceiling. We didn’t experience any issues in operation, even if standing between the handle and cleaner. 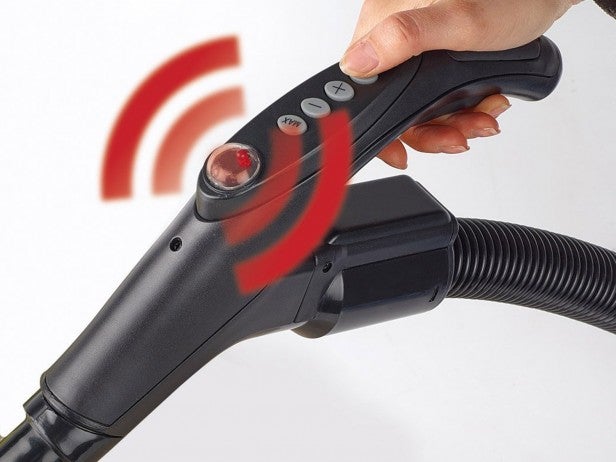 The four-button controls on the handle are on/off, up/down, power and max, with three power levels on offer. LED lights on the cleaner display the level of power selected, along with an LED warning light that is an indicator of air-flow being blocked somewhere. The main power switch on the body needs to be set to “On” before the remote will operate.

The telescopic tubes are finished in a brushed, glossy, stainless steel with a ratchet system. You can choose a range of tube lengths between 50 and 80 centimetres. The tube is a simple push-fit into the handle. It’s a snug fit, but thanks to steel against plastic, it’s easy to pull apart for storage. All six tools fit directly to the handle or the extension tubes.

Which brings us to the MC330 Turbo’s fine collection of floor tools. Topping the bill is a 28cm-wide turbo-brush head with tilt and pivot neck, suction release slider (not really needed when you have variable power on the handle) and four wheels to aid scooting it around.

The brush has standard mid-stiffness bristles. While there’s a flap that allows cleaning access to the air turbine, the brush itself is best cleaned in the old-fashioned “sticking scissors in through the base” sort of way. 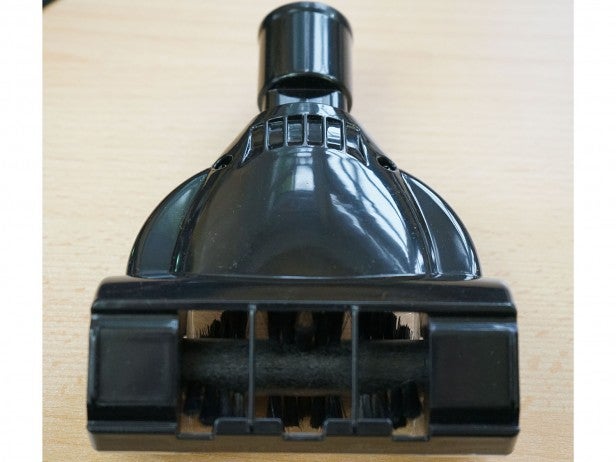 A second, smaller turbo tool is also provided for stairs and smaller areas. This is a fairly basic tool with a fixed neck. Due to the large plastic mouldings for the turbines, it addresses only some 60% of the full width of the tool (pictured). It will split open for cleaning, but not without a small Philips screwdriver and a good eye for dropped screws.

If you want one head to do it all then Polti’s combined hard and carpeted floor-head certainly looks the part with its carbon-like checked top pattern. It’s nearly 30cm wide, so will cover a large area, and its air channels extend to the outer edges to promise cleaning up to the skirting board.

It’s fitted with a rear rubber blade, drop-down brush sweepers and five wheels for easy manoeuvring. The neck rotates and pivots for easy steering too.

For those with lots of hard floor, and in particular softer hard floor such as parquet, the MC330 Turbo’s dedicated parquet tool is an interesting addition to the lineup.

It’s usefully wide at nearly 30cm and is fitted with long, soft bristles to aid sweeping in the dirt. Wheels at either end help to keep it moving without sticking down, but also act as a rocker to keep one of the two rows of brushes off the ground for best vacuuming.

The Forzaspira offers a solid four layers of filtration and claims HEPA-rated quality of exhaust emission, scoring a reasonable C rating for this on the energy label.

Bin-top filters are foam and cartridge, with a third foam layer before the motor beneath the bin. The HEPA post motor filter is unusually located at the side, in what looks at first glance like a large wheel. It’s actually just a moulding… the real wheels are much smaller and hidden underneath.

The Forzaspira MC330 Turbo certainly isn’t your lightweight speedster, weighing in at a fairly hefty 4.9kg. Thanks to the beefy steel tubes, remote-control electronics in the handle and good-sized combination floor-head, these three together add a further 1.6kg to the total weight.

Despite those large wheel-like mouldings, the MC330 Turbo actually uses four much smaller wheels underneath – two fixed and two trolley-style at the front.

On hard surfaces these allow the cleaner to track your hose tugs with ease, and the low-mounted hose ensures the cleaner always remains stable. It does get a little bogged down in deep-pile carpets, but the large bases on the front trolley wheels keep things moving – even if it’s more by sliding over deep carpet than rolling. 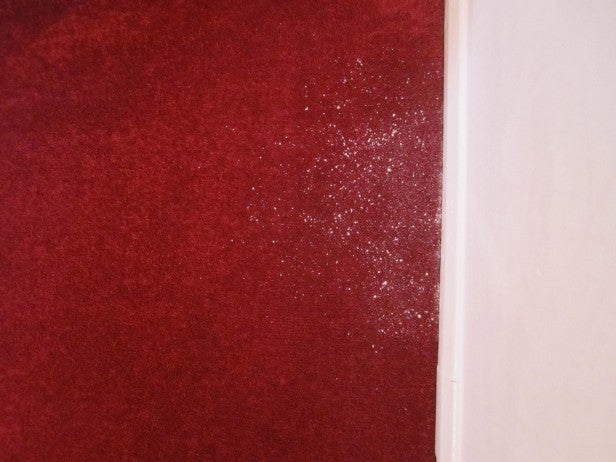 In terms of sheer suction power, the MC300 packs a reasonable punch, but it didn’t appear to have the high-volume airflow that some 700W models demonstrate.

Nor is it a stealth-silent model for cleaning in the dead of night. The three-step power control hits the EU label’s 78dB over carpeted floors only on the minimum setting, gaining +2dB on the mid and another +2dB to 82dB on the maximum. Still, Italian supercars aren’t quiet either. 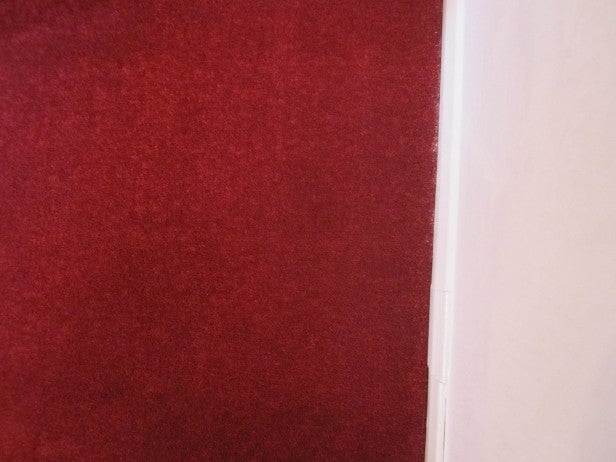 Using the larger of the two turbo brushes on open carpet, the MC300 Turbo is fairly easy to use since the wheels and turbo brush limit how much the head sticks down with suction.

On maximum power, over short-pile carpets, there remains a noticeable amount of suck-down resistance to movement. This requires either a firm hand, reduction in power, or a need to open the slider on top of the head. Since the power reduction controls are easily to hand, this shouldn’t be a problem.

The problem is that the turbo fan isn’t particularly efficient at turning the turbo brush with any real power. It spins relatively slowly against the resistance of the carpet, and on deep-pile carpets stops spinning altogether on the forward stroke.

In the mid-length red test carpet results with the test powder were pretty good, although the cleaning ability close to the skirting edge was only so-so. Yet tougher duties proved more of a challenge, as you’ll see from our pet hair test.