What is the Polk MagniFi Max SR?

Everyone loves surround sound, right? But no one can be bothered to accommodate it any more – all those speakers and cables running everywhere. Soundbars are far more convenient. No matter how much they try, however, none have managed a convincing ‘virtual surround’ effect. The nifty Polk MagniFi Max SR soundbar doesn’t even try to go virtual.

Instead, it comes with a pair of genuine surround speakers and a subwoofer, all of which connect wirelessly. While it isn’t sonically perfect, the Max SR does offer a decent compromise for people who can’t fit a full-on surround system into their lives.

Not surprisingly, the actual soundbar of the MagniFi Max SR is very soundbar-like. It’s long and slender, but also thin enough to still sit below the IR sensor on most stand-mounted TVs without messing with your remote commands. It can be fixed to a wall, though, and mounts are included.

Beneath the grille are four 3×1-inch oval woofers, a 1-inch mid-range driver and two 0.75-inch tweeters, all driven by a 180W amp. There are bass ports at either end, and a useful row of LEDs to display the volume level and device status.

On the top are the essential controls: power, source selection, Bluetooth, volume up and down, and mute. There are also dedicated buttons for VoiceAdjust – Polk’s clever tech for adjusting the volume of speech without affecting the level of other sound effects.

Around the back is a decent array of connections. You get three 4K-ready HDMI inputs, and HDMI ARC output, TOSLINK optical in, 3.5mm aux in, and Ethernet. Bluetooth and Wi-Fi are built in, as is Chromecast support.

The wireless subwoofer has a downward-firing 8-inch driver and 160W of amplification. It’s fairly small and neat – 37cm high, the same in width, and 31cm deep – so it’s easily hidden behind a sofa.

The two rear speakers are almost identical, with the difference being that there’s a specific right and left; you can’t switch the channels, so make sure you place the correct one on each side. They’re compact and discreet, if a little uninspiring in their looks.

Getting the whole lot to connect wirelessly is incredibly easy, thanks to sync buttons on each piece of kit. I didn’t have any problem with reliability, either.

The Max SR’s remote control is pretty decent, and a big step up on the blister-button unit the comes with the cheaper Polk Signa Solo. It’s a bit more substantial and has a rubber top that makes it quite pleasing to grip. There are some useful controls for adjusting the left-right balance and surround volume, as well as the usual stuff. It can learn IR codes, too.

One really nice touch with MagniFi Max SR, though, is that it’s already been pre-programmed to respond to the IR commands from most big-name TV manufacturers. That meant I was able to turn my Philips TV’s speakers off and still use my TV remote to control the volume of the Polk. Neat. 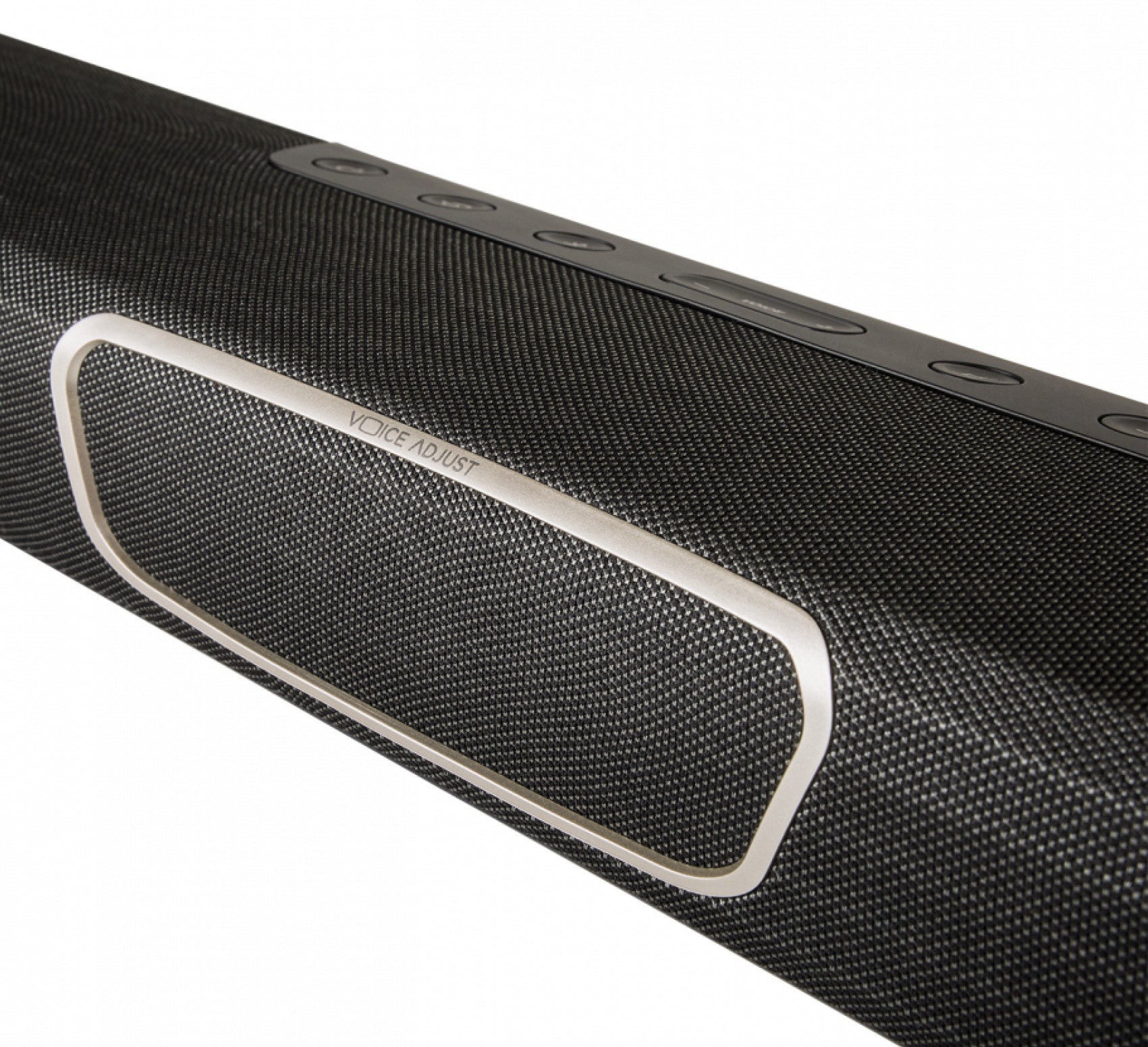 The Max SR is a bit of a mixed bag, sonically. You get decent speech clarity from the soundbar itself, even without fiddling with the VoiceAdjust settings. The subwoofer is easily capable of making itself heard, flooding a decent-sized room with bass. It isn’t the most well-controlled bass, though – there’s nothing tight or contained about it.

The surround speakers do a decent job of hurling effects behind you, with suitably similar voicing to the soundbar that they don’t jar.

Things fall down with the integration of the sub, as the soundbar doesn’t extend quite well enough toward the bottom end and neither does the subwoofer attempt to meet it halfway. It probably won’t bother you during most TV viewing, but on occasion it can be too obvious that a certain sound is coming from the sub rather than just the system as a whole. You don’t want a subwoofer to be a distraction, but you also don’t want to turn it down so much that you might as well not have it.

As an everyday sound system, the Max SR is still a huge upgrade over the speakers built into any TV, however. It isn’t wonderful with music – but again, it’s still better than most Bluetooth speakers costing under £300, and it has Chromecast support for extra versatility.

The Max SR is at a price point that’s right up there with the very best soundbars and soundbases, and in outright sonic fisticuffs it mostly comes off second best.

But you’re paying a premium for that wireless surround sound – not some faux surround, trying (and failing) to be bounced off walls; but genuine surround with wireless rear speakers. For cinema immersion, the Polk is definitely a better option than any of the one-box solutions around.

However, the Philips Fidelio B5 offers the same sort of form factor, but more balanced sound – if you can still find one for sale.

If you want surround sound with minimum fuss and maximum discretion, the Polk MagniFi Max SR is a good option.