What is the Polk Boom Swimmer Duo?

Polk has released a follow-up to its original Swimmer Bluetooth speaker in the form of the Polk Boom Swimmer Duo. What’s new? Well the latest model features the same rugged waterproof housing, but this time you have the option of pairing two of the portable speakers together to boost the volume.

Ultimate Ears has just launched its new Wonderboom, which will be a tough speaker to beat in this category, given its robust design and huge volume. But Polk has the advantage of being £50 cheaper.

Is that enough to give the more affordable speaker the edge over the big boys? Well, for the most part, the answer is yes.

First, this is an entry-level speaker, designed for ultimate portability. The 2.6-inch diameter and 180g weight makes the Polk the kind of device you’d bring with you on a day trip to boost the sound from your phone, rather than a home speaker setup. 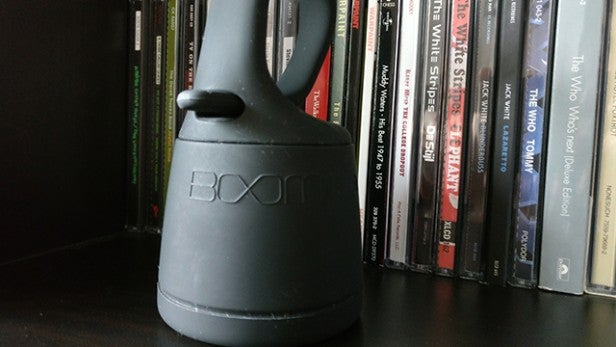 And while the Swimmer Duo may be small, it’s built to last. The rubberized exterior means it will survive even significant drops of water, and although the rubber doesn’t make for the most premium feel, it does the job for a speaker designed for portability and shock resistance.

Adding to the shock-proofing and general durability, the IPX7 rating means you’ll also be able to immerse the speaker in up to 3 feet of water for 30 minutes. Indeed, the Swimmer Duo survived its stint as my shower speaker, and continued to work perfectly following a dunk in the bath. The waterproofing is a great feature, and gives the Polk an immediate edge over the merely splash-proof £40 Creative Muvo 2c. Like its rival, the Swimmer Duo can be held in one hand, and will fit in your pocket if you don’t mind stretching out your coat a little.

Adding to the portability factor, Polk has provided its tiny speaker with two attachments that fix to the top and can be swapped, depending on its placement. One is a flexible rubber hook that allows you to attach the Duo to all manner of furniture. The other is a suction cup that’s handy for sticking the speaker in your shower, but which also has some sounds benefits – more on that later. 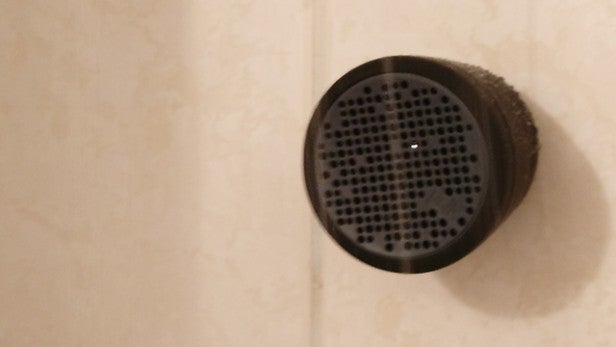 One slightly underwhelming feature of the Swimmer Duo design are the raised rubber buttons. In order to turn it on, you need to hold the power button for a few seconds. But without picking the speaker up and making sure you’ve got the right button, you’ll find it difficult to be sure you’re holding down the right bit of raised rubber. It’s actually quite difficult to feel out the power button beneath your finger and, in low light, it can be really quite hard to tell the buttons apart. While this isn’t a significant issue, it’s definitely a niggle that might irritate some.

Alongside the power button, you’ll find the plus and minus multi-function buttons that work as volume controls, track-skipping functions, fast-forward, rewind and phone controls. There’s also the pairing button, an LED light, and a built-in mic. All are easily accessible, and the pairing itself proved to be as easy as you’d hope for.

Getting to the charging port and 3.5mm jack is slightly more difficult, however. In order to charge the speaker, you need to unscrew the top attachment and prise open a rubber flap to access the Micro USB port. The fact that you have to disassemble the device is a small irritation in itself, but the rubber cover then proved really difficult to open. I had to use a pair of tweezers at one point, just to get beneath it as my nails weren’t doing the job. On the plus side, you can be sure no water is getting into the internals here. 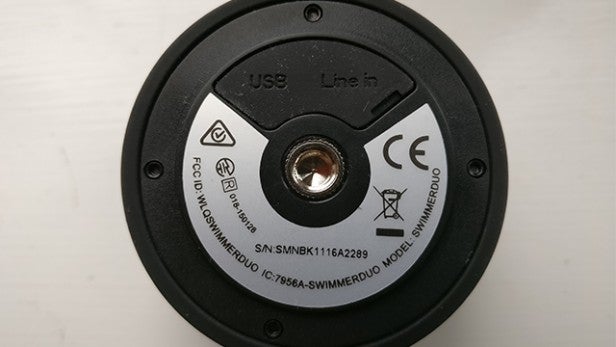 Accessibility issues aside, the speaker will last eight hours on a single charge, which isn’t bad for this price point – although this is two hours less than the UE Wonderboom. It’s still a couple more hours than you’ll get with the Creative Muvo 2c, though, and should be adequate for a day trip.

Finally, one of the biggest selling points here is the ability to pair two Swimmer Duos to boost the sound and create a true stereo setup – hence the ‘Duo’ branding. Pairing two devices is supposedly quite easy, but the company only sent us the one speaker, so I wasn’t able to test this out for myself. The idea is a great one, however, and means you should be able to get some decent stereo sound from two Duos that will likely rival the one UE Wonderboom – for the same price as one of UE’s alternatives.

Let’s be clear – this is a sub-£50 speaker, so you’re not going to be getting earth-shattering bass and sparkling treble from the Swimmer Duo’s 30mm driver. This is a portable device designed to add a little more power to the sound from your phone or laptop. And it does that well. 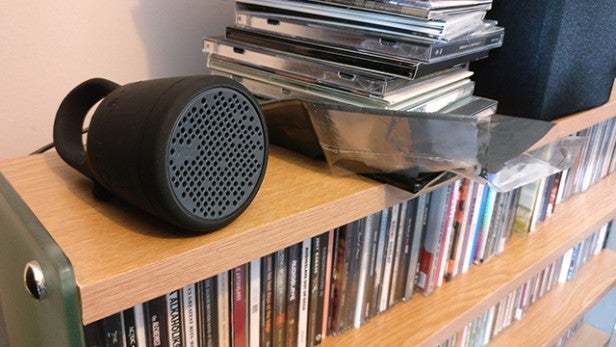 At first you may notice that the bass isn’t quite what it could be, even for a small speaker such as this. But if you switch the flexible handle attachment for the suction cup and place the device on a suitably resonant surface, you might be surprised at the difference.

When I first tried out the speaker, I used the handle to tie it to the top of an unused mic stand I had set up, just to keep the speaker elevated at ear height while I worked. And while the sound was slightly louder and fuller than what the speakers on my 13-inch MacBook managed to pump out, there wasn’t all that much difference, if I’m being honest.

But once I swapped the handle attachment for the suction cup and stuck the Swimmer Duo to my desk, with the speaker facing upwards, the sound became a lot more dynamic. The bass response was dramatically improved, and the speaker seemed generally louder. In short, you’ll get the best out of Polk’s speaker if you use the suction cup to stick it to a big resonant surface.

Of course, this is all relative. We’re still talking about an affordable Bluetooth speaker here, so while the bass undoubtedly improved on using the suction cup, you’re still not getting the most detailed low-end. It will kick, but you won’t notice the nuances of the lower frequencies too much. Similarly, the mids and trebles are solid for a speaker in this price range, but there isn’t much subtlety in the upper and mid-tones either. 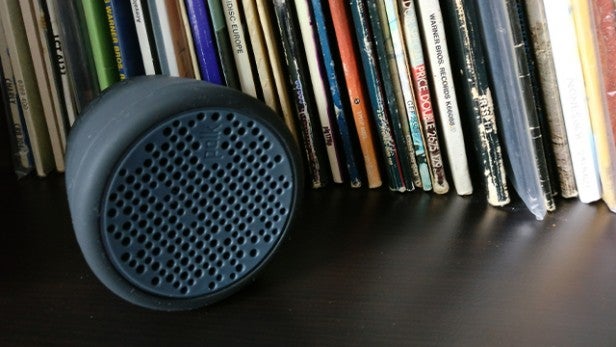 Once you crank the volume, you’ll notice the Duo is capable of getting pretty loud, but the sound can tend to distort once it gets into the higher volumes. Pairing two of these devices together, however, should provide a solid stereo experience with plenty of volume to make for a really quite robust budget setup.

One thing to note is that the speaker often suffers brief drops in sound quality when first connecting a Bluetooth device – an issue I’ve come across with many other budget devices, too. Whether it was my phone or laptop, the Swimmer Duo often began playing back the newly connected device’s sound at a very low quality. It would only last for about three seconds before the sound dropped altogether for about a second, but then came back in at full quality. Nevertheless, it’s something you should be aware of.

Should I buy the Polk Boom Swimmer Duo?

If you’re planning a trip and need an affordable portable speaker then it’s hard not to recommend Polk’s offering. It won’t give you the most varied or dynamic sound quality, but it comes with some impressive waterproofing and shock-proofing built in, and its ability to be used in tandem with another speaker gives it an edge over rival devices.

Those looking for a good home setup should look elsewhere – but as a travel companion, the Swimmer Duo is loud, affordable and durable. Slightly longer battery life would have been nice, and the charging port is frustratingly difficult to access. On the whole, however, you’re unlikely to be disappointed if you drop £40 on Polk’s portable speaker.