What is the Polaroid Pop?

If you’re of a certain age, you probably hold the Polaroid brand with a degree of nostalgia. The company was synonymous with instant cameras and quickly became a part of pop culture. Nowadays, it lives on as a licensed brand.

It’s this nostalgia the company is banking on for the Polaroid Pop, which is both an instant camera like the Fuji Instax Mini 8 or Leica SOFORT and a portable printer like the HP Sprocket. Unfortunately, it isn’t particularly good at either, with a lacklustre camera and poor print quality.

Top this off with cheap build quality, frustrating and buggy handling and pricey consumables, and – ultimately – you have a disappointing device that doesn’t live up to the Polaroid heritage.

There’s no getting away from the fact that the Polaroid Pop is a hefty camera. In its defence, it does have to be able to hold its special Zink printing paper, but even then it’s large. It isn’t a camera you’ll be able to slip into a pocket ready to capture the next surprising moment.

Its rectangular design with heavily curved corners is at least playful in keeping with the brand. But it’s the glossy plastic construction that makes the Polaroid Pop feel cheap and tacky, like a children’s toy.

The plastic finish is also a fingerprint magnet and the type of material that scratches easily. Considering you’re likely to throw the Polaroid Pop into a bag to carry it around, you’ll need to pay attention to what else is in there if you want to keep the camera in good condition. Even being careful, my review unit has picked up micro-scratches that are noticeable under the light. 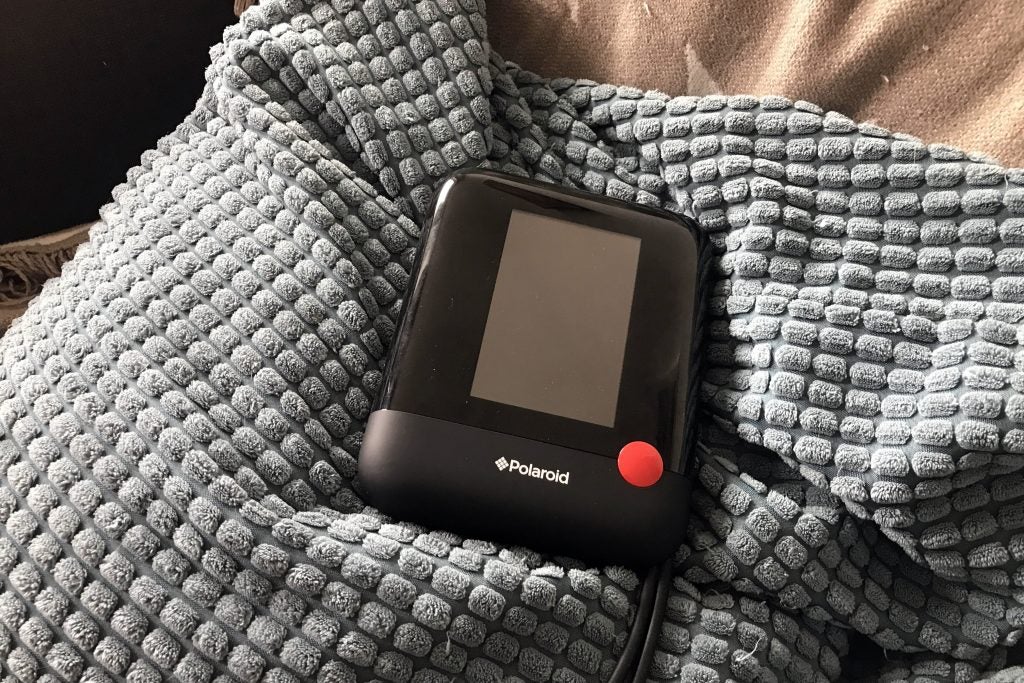 The big red shutter button on the device’s front also serves as the power button to turn on the camera. You turn off the camera using an on-screen button.

The bottom of the Polaroid Pop is actually a slide off cover for the paper feed. This is available in a variety of colours, including yellow and green; my review model was a more conservative black. The cover has a rubbery coating, through which you feed the wrist strap to minimise the risk of losing the cover. 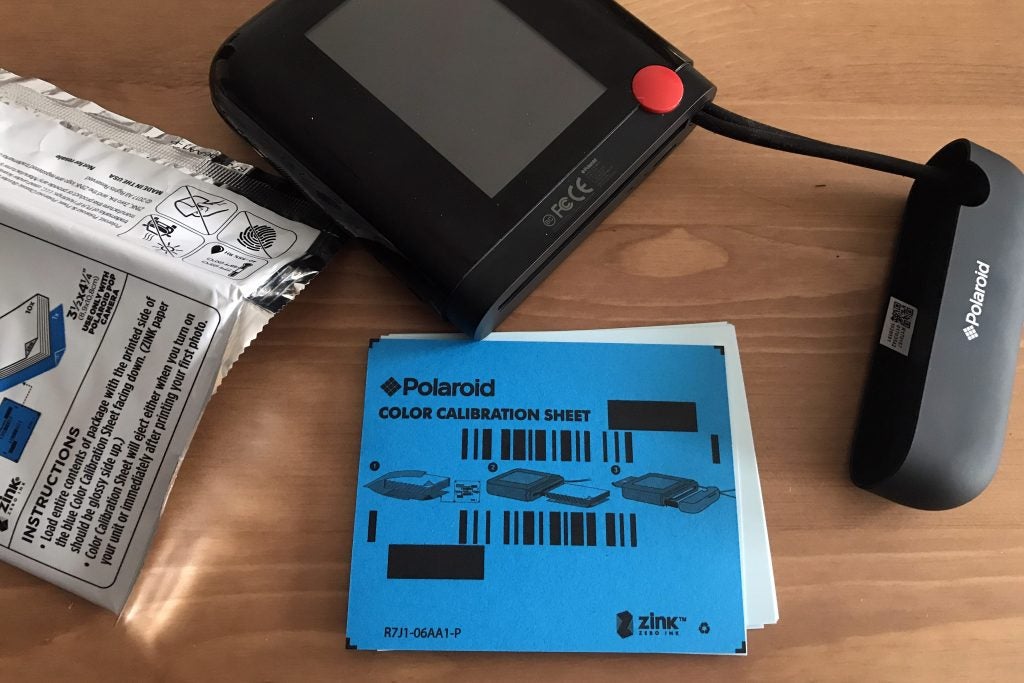 Annoyingly, the cover is secured by a magnet and the camera is able to detect when the cover isn’t on – you’ll receive an error message on-screen notifying you of the fact. The camera is incredibly fussy about having the cover in place, so if it’s loose even a fraction of a millimetre, you’ll have to give the cover a prod until the camera decides it’s happy. 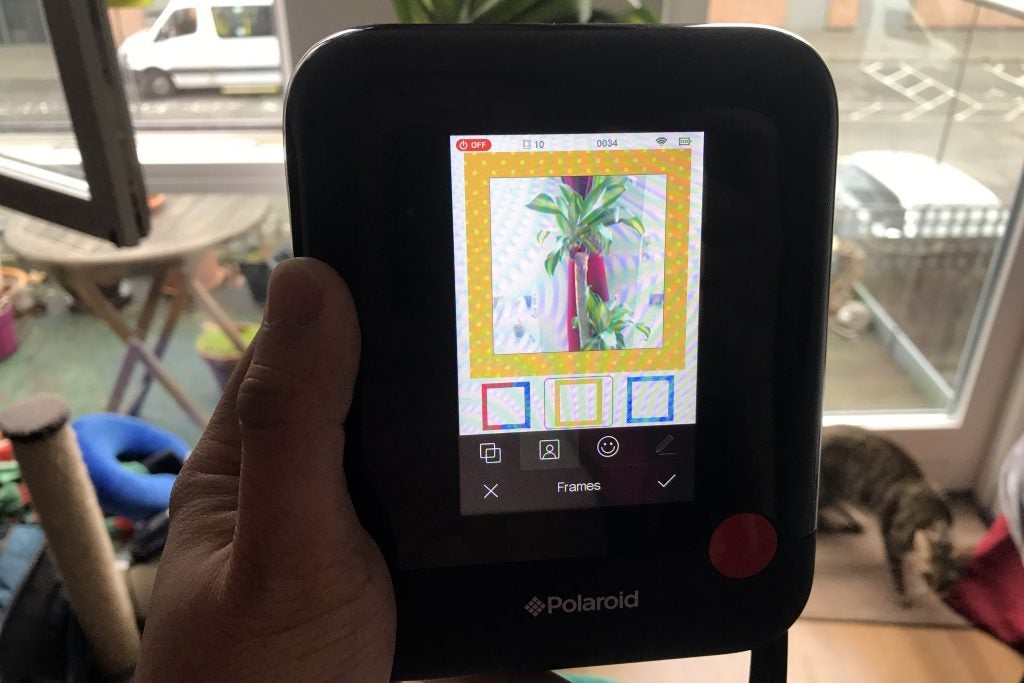 The front of the Polaroid Pop is characterised by its 3.97-inch touchscreen LCD, surrounded by a thick bezel. The display is sufficiently bright, but it’s low resolution and grainy as a result. It’s fine for framing your shots and previewing your prints, however. I also found the touch responsiveness worked well. Round the back is the lens that’s supported by a dual LED flash

You’re run through an on-screen tutorial when you first turn on the camera, but it’s not a great start when the camera is explaining what you should do if you find that it won’t turn on. I found the Polaroid  Pop failed to turn on on multiple occasions. But before you even get to that point, note that the Polaroid Pop is incredibly fussy about how it’s charged. 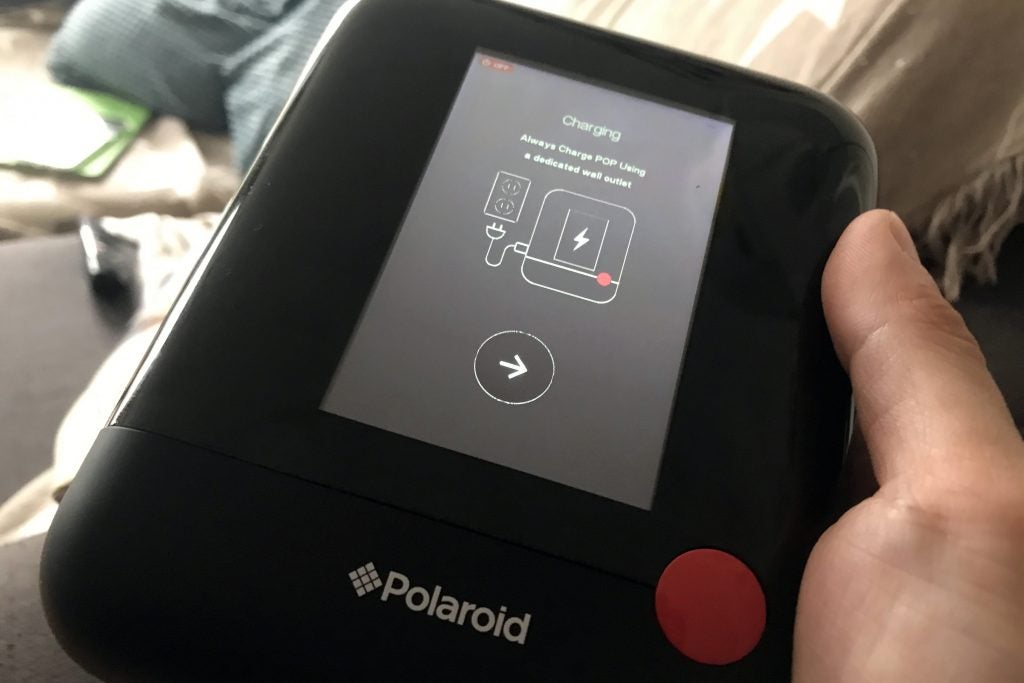 The camera makes it clear it wants 5V/2A to top up its battery through the micro-USB port. But having struggled to get the camera to initially charge, I consulted the Polaroid website’s troubleshooting page. Here, it says the camera should be charged from a single USB wall adapter plugged directly into a wall, and not through a multi-USB port charger.

I tried a range of different USB charging methods and adapters to find that only some worked. Considering a wall adapter isn’t even included, this proved hugely frustrating. 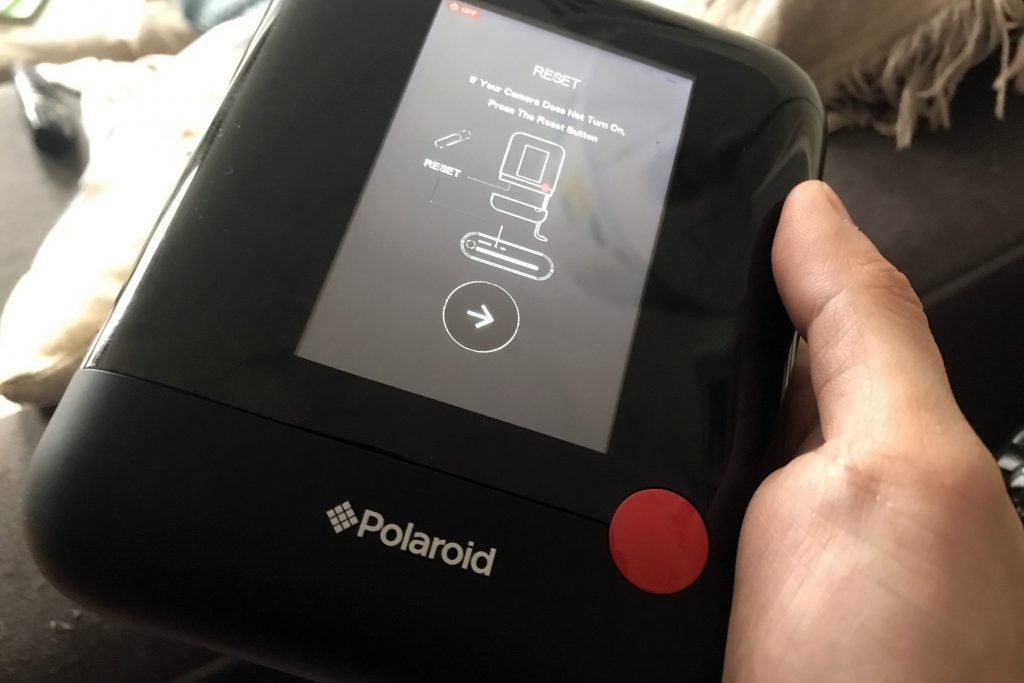 If you do find the camera won’t turn on – but you have succeeded in charging it – the tutorial says to use the reset button, which you’ll need a pin to press. I’ve lost count of the number of times I’ve had to use this button over the past few weeks. From instances where the camera has failed to turn on, to it becoming stuck transferring a photo from my phone, or just generally crashing inexplicably.

And since there’s no physical ‘off’ button, or a removable battery, you’ll have to rely on the reset button whenever there’s a camera software crash; the on-screen power button isn’t always available to give the Pop the old ‘off and back on’ treatment. If you plan to take the Polaroid Pop out and about, be sure to have a safety pin handy for emergencies – which in my experience are likely to happen often. 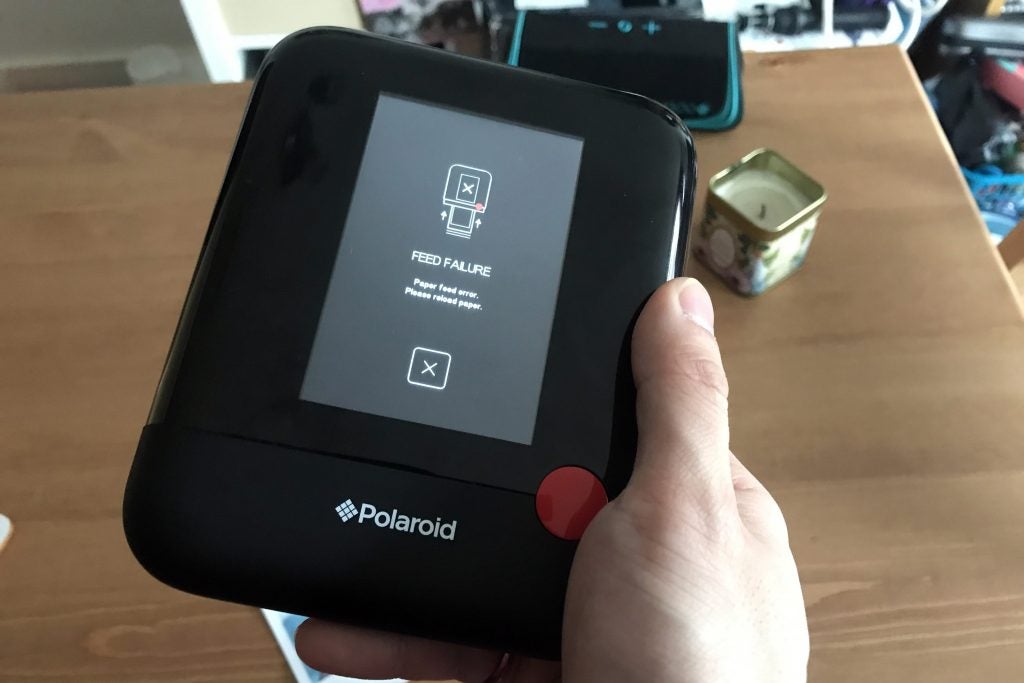 Loading the Zink paper can also prove problematic, with the camera on occasion throwing up a paper feed error for no discernible reason.

When it works, the camera’s menu and handling is pretty straightforward. There’s a digital zoom slider and the ability to swap between still 20-megapixel images or 1080p video. There’s even a GIF recording mode that loops like an Instagram Boomerang clip. You can preview the photos and videos you’ve taken using the camera and start a print. There are frames and borders you can add to images to give them some extra personality.

The Polaroid Pop companion app for iOS and Android can be used to transfer over images you’ve captured elsewhere for printing. But there’s no remote shooting control or any advanced features.

To pair with the app, simply connect to the Polaroid Pop’s Wi-Fi network. When this works, the images transfer pretty quickly; but sometimes they’ll fail to transfer altogether as mentioned earlier. Provided the transfer doesn’t actually start and then just fail, I found closing and re-opening the app usually did the trick. 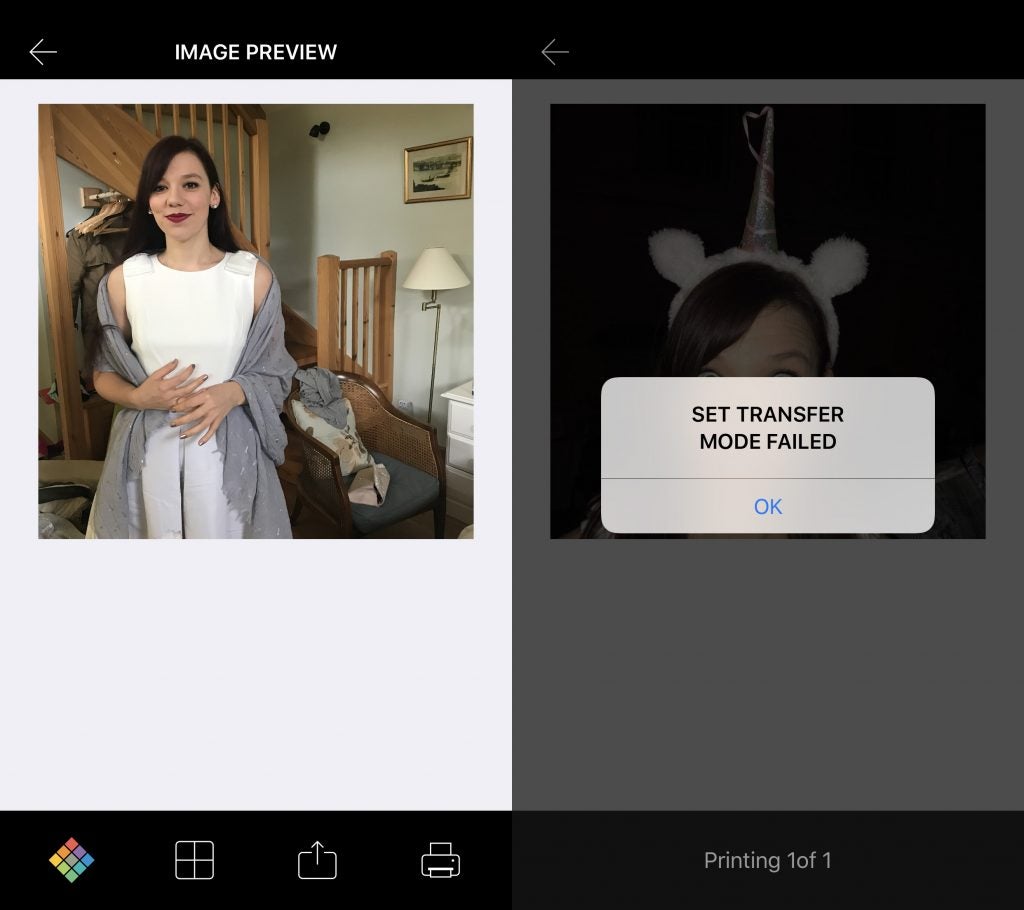 Above photos were not taken on the Polaroid Pop

Still, it’s a fiddly process and just another buggy experience that became characteristic of my time with the Polaroid Pop.

Battery life is supposed to be enough for 50 shots, but I never got close to that. I’d be down to half battery after rattling off half-a-dozen shots. This was mainly as a result of jumping through hoops and crashes that, ultimately, would consume much of the power before you’d even get to the printing stage.

The Polaroid Pop uses Zink paper, which is the same as used in the HP Sprocket. This ‘zero ink’ paper actually embeds the ink into the paper itself. The Pop uses 3.25 x 4.25-inch Zink paper, which allows for that instantly recognisable square Polaroid print format with some unused space below for you to caption or label your shots. Personally, I’d have preferred to just print on the full paper. 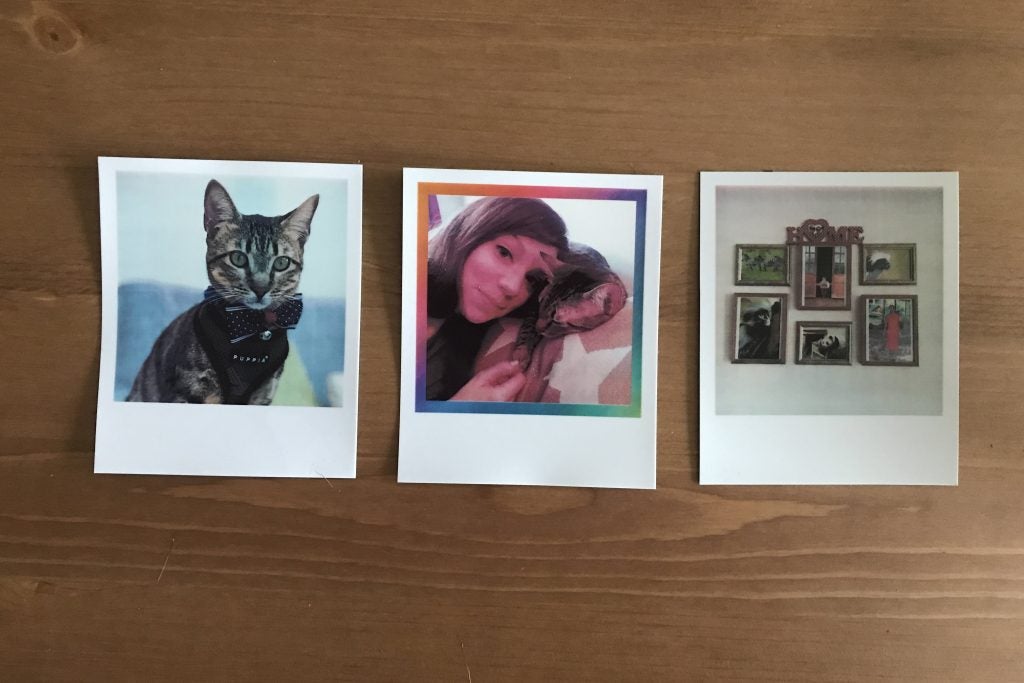 Photos taken on the Polaroid Pop

Making the overall experience even worse was the disappointing print quality; it was worse than that of the HP Sprocket. The Pop’s colour production is completely off compared to the original photos, both from the Pop itself and from an iPhone’s camera. Prints tend to display an orange tint – and a lack of detail. Results are worse than even the worst inkjet printer I’ve used.

But, considering the nature of the Pop, I could perhaps overlook some of its print quality shortcomings if the consumables weren’t so expensive. 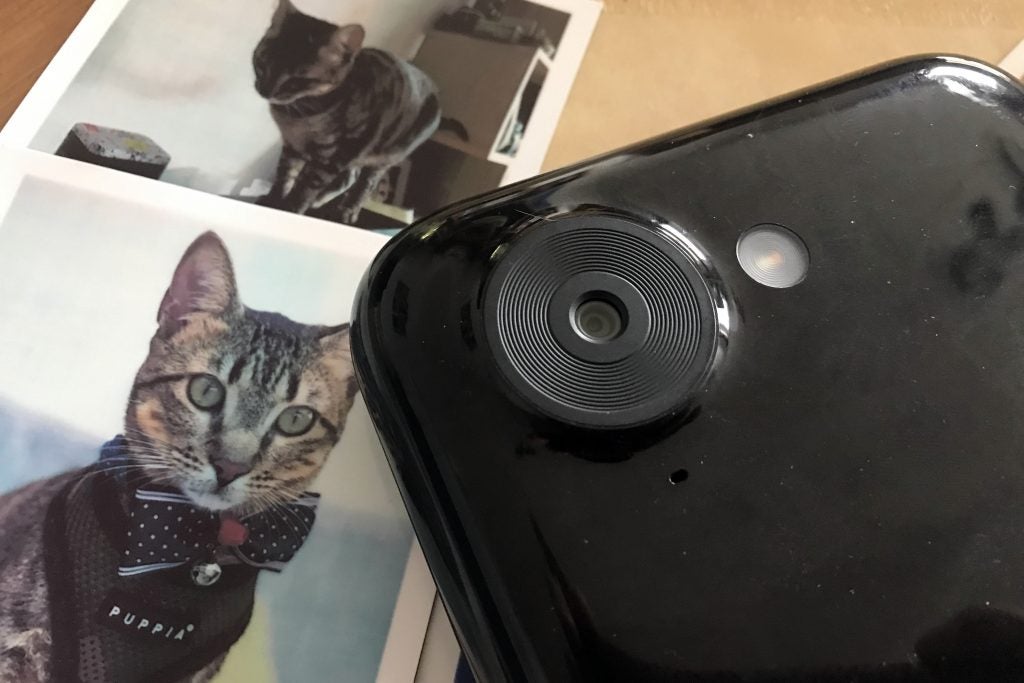 Why buy the Polaroid Pop? 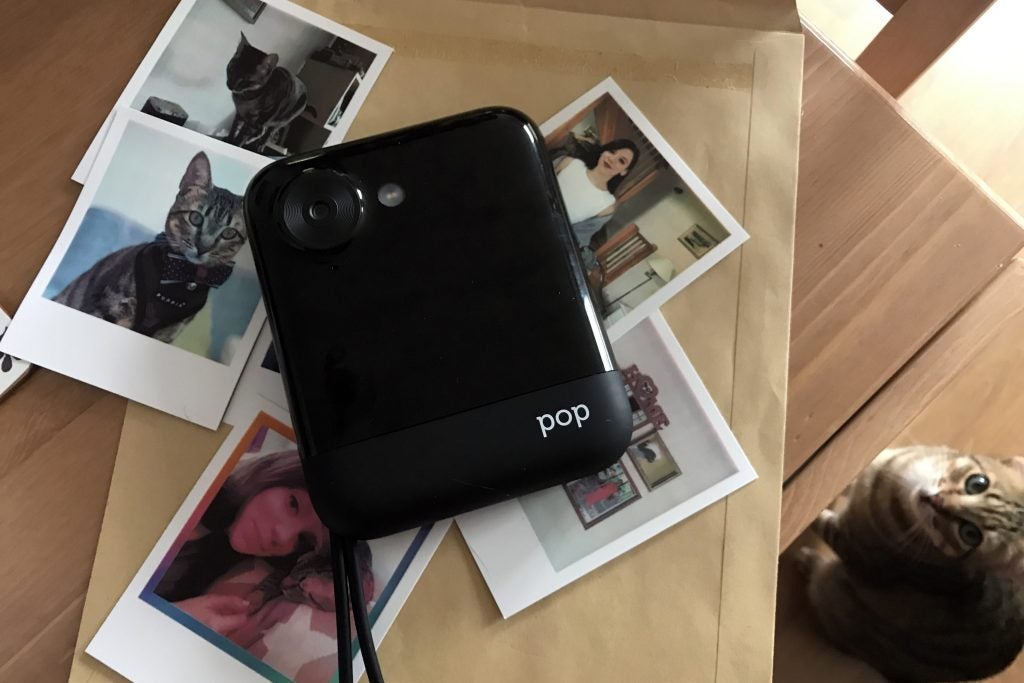 The Polaroid Pop is expensive at around £200 and one of the most frustrating products I’ve used in a long time. You’d be much better off spending nearly half the price for a HP Sprocket and just using your smartphone to take photos. The results will likely be superior to anything the Polaroid Pop delivers.

If you’re dead set on an instant camera, the Leica SOFORT doesn’t cost much more and will deliver better photos, albeit without the ability to print them from a smartphone.

The Polaroid Pop is one to avoid, unless you like pulling your hair out – and then still being disappointed.

Frustrating to use and simply not worth the hassle – the Polaroid Pop is one to avoid.