The Polar Vantage V2 is a very competent tracker that will meet even the most hardcore of athlete's needs. However, a few niggles in its user interface and a lack of local music functionality are minor annoyances.

The Polar Vantage V2 is the latest tracker-come-smartwatch to be marketed at the enthusiast, hardcore fitness market.

It targets the exact same space as the Garmin Forerunner 745 I reviewed earlier this year, and on paper features a very similar feature set, offering tracking metrics for pretty much every activity you can think of and a suite of post-exercise analysis services.

For the most part, this truly is a best smartwatch and will easily meet the needs of any regular triathlete or hardcore runner. But there are a few bugs in the ointment that stop it being a complete “shut up and take my money” purchase. 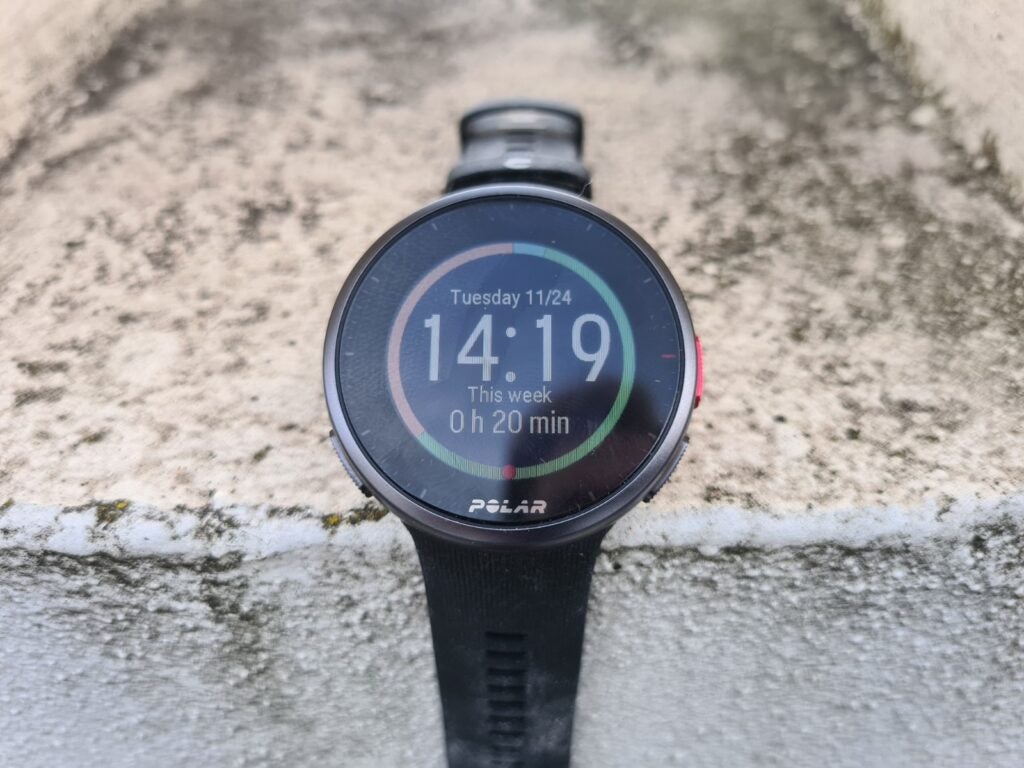 Polar Vantage V2 design – Made with serious athletes in mind

Serious fitness trackers will never offer the chic design of dedicated smartwatches, but the Vantage V2 does a fairly good job of hiding its focus.  It’s noticeably less conspicuous than most of the trackers I’ve tested, despite being built to MIL-STD-810G military ruggedization standards.

The spherical main body measures in at a modest 47 x 47 x 13mm. The thickness, in particular, is impressive given how much tech Polar has  packed into the watch. The aerospace aluminium alloy and glass-fibre reinforced polymer casing also give it a nicely premium feel.

This, alongside its 52g weight, makes it one of a select few hardcore fitness trackers that you’d wear as comfortably with a suit as you would with your workout gear.

Battery life, too, is excellent. Polar quotes the watch’s 346mAh Li-pol battery as offering 40 hours of use with GPS, and around seven days with it off. Testing it against the Forerunner 745, I saw around 4-5 days with the Vantage and 5-6 out of the Garmin. Although this puts it slightly behind its arch-rival, for daily workout tracking this still represents respectable performance.

The only design decision I’m not completely sold on is the always-on 1.2-inch colour touchscreen. The 240 x 240 resolution display is sharp enough for text to remain legible and the Gorilla Glass coating is suitably rugged, having survived an accidental encounter with a free weight during testing.

But it’s surrounded by a huge bezel, and I’m yet to be convinced that touch inputs are the best way to control a device of this size. This is especially true on the Vantage 2, where the screen occasionally struggles to read rapid-touch inputs, especially when used outdoors in rainy/damp conditions.

Thankfully, the watch does feature physical buttons around its sides that can be used to navigate its menus. The interface is reasonably intuitive, especially if you’re coming from a Garmin Forerunner or Fenix.

The top-left button activates the backlight, while the bottom-left control launches a shortcut menu featuring the watch’s activity and wellness-tracking features. The top- and bottom-right controls let you scroll through the menus and various performance/health-tracking metrics, while the middle button on the right acts as the select control.

The watch interface works well enough and is easily customisable, allowing you to set the order of the newly added data screens (widgets for items such as the weather, your recovery state, and so on) and manage its notifications and music controls. The only downside is that, unlike Garmin’s Forerunner, the Polar Vantage V2 doesn’t support local music playback.

While this might not be a big deal for casual joggers and gym-goers, the inability to play music without a phone tethered feels like an odd omission in a fitness tracker of this level. The whole point of having a GPS watch is so that I can track my workouts and navigate routes without having to take my phone with me. 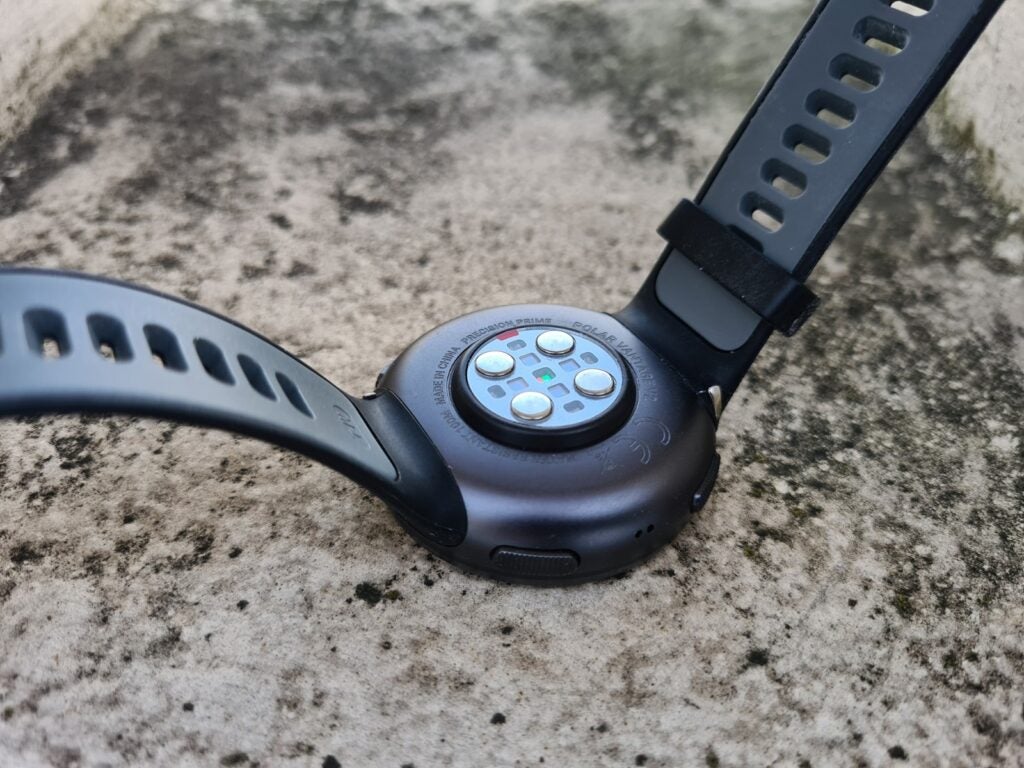 Polar Vantage V2 performance – In-depth tracking, but there are a few minor issues

The Vantage V2 is top-notch when it comes to tracking, although some of its more advanced features can feel a little finicky.

At first glance, the watch offers all the tracking metrics you’d expect of a fitness-focused wearable at this price. Out of the box, the activities it can track aren’t as diverse as Garmin’s latest line of wearables, limiting you to various forms of running, cycling, swimming and strength activities. However, it’s quick and easy to expand the range in the Polar Flow smartphone or computer app. At the time of publishing, I counted the watch as supporting around 130 different workouts, which isn’t to be sniffed at.

As trackers go, I found the V2 a solid device. Testing it against the Forerunner 745 on routes I know to be around 5km and 10km, I never spotted any serious anomalies in the final distance tracked. The built-in chip, which supports GPS, GLONASS and Galileo was also suitably snappy, generally securing a stable connection within less than a minute of being outside.

The post-workout training metrics offer all the data a serious athlete will need. After a run, the watch will offer you average lap times, heart rate, cadence plus some more advanced metrics. These include your training effect, which uses your heart rate zones, and past performance data to gauge how useful, or unhelpful the exercise was, plus a few other features such as your VO2 Max estimate, which is bizarrely labelled on the V2 as your “running index”.

It has a few other cool metrics, too, such as hill splitter and calories burned. Hill splitter is a feature seen on the last generation of Polar watches. At its most basic, it offers more detailed breakdowns of your performance while running up or downhill.

The calories feature is one that cardio fans or people on weight-loss regimes will appreciate. It uses algorithms and the captured biometric data to roughly estimate the carbs, protein and fat that were burned during a workout. 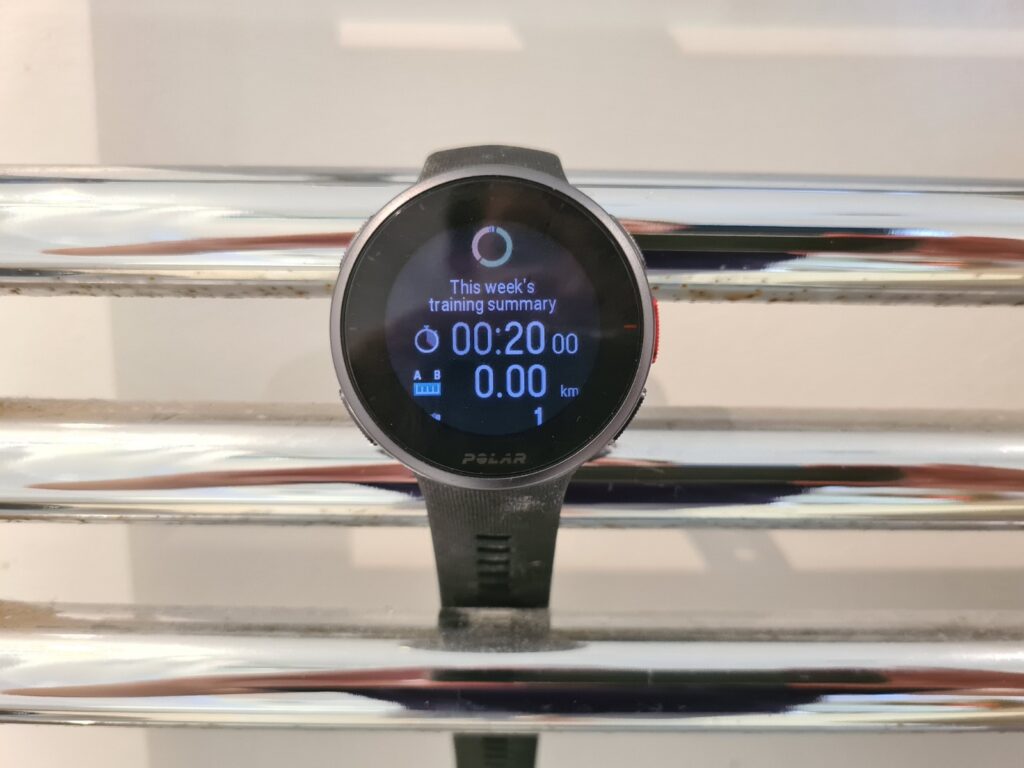 Heart rate monitoring is the one area where I noticed the Polar fell slightly short. Testing it against the Fenix 6 Solar and MyZone HRM, in common with the Garmin and every wrist-based heart rate tracker it did occasionally struggle to keep up with high-intensity spikes – for example, when I was working a bag, doing stair sprints or general HIIT sessions. To make matters worse, the sensor is very sensitive to movements and rapid pauses when doing activities such as cycling.

Early on I noticed weird fluctuations mid-run, where it would spike at odd points during my workout. After a bit of tweaking, I realised this was due to minor movements of the device mid-run. Adjusting the strap fixed the issue, but it required me to wear the tracker a notch tighter than I’d normally be comfortable with. As mentioned, this is an issue among most HRM wrist trackers; it’s just slightly more pronounced with the Vantage V2. As ever, if you want truly decent heart rate tracking then you’d be better investing in a dedicated strap.

What sets the Vantage V2 apart from its Garmin rivals, however, are its post-workout “test” features. These are a series of workouts and quick-fire exercises designed to let the watch better gauge your performance condition, and to offer more accurate readings of key metrics such as VO2 Max.

Out of the box the watch comes with Orthostatic, Leg Recovery, Cycling, Running and Fitness test options. These are guided tests that instruct you to follow a series of on-screen commands before offering more detailed, up-to-date guidance on your current condition.

The Orthostatic test requires an HRM strap and delivers a detailed breakdown of how your body is holding up between workouts.

Leg Recovery is a more casual extension/alternative to this. It measures your leg’s level of fatigue by tasking you to do three quick-standing jumps. It then uses the data to tailor its FitSpark (guided workout) recommendations and indicate whether you should rest for longer before your next workout.

FitSpark is a coaching service that suggests guided workout sessions based on your data. They’re split into cardio, strength and supportive categories.

The Cycling and Running tests do what they say on the tin, providing detailed and personalised training/heart rate zones during workouts. However, they require a lot more time to do. The Running test is basically interval training that gradually ramps up your pace in a bid to find your peak.

The Fitness test is more sedate. It asks you to lie down and chill while it takes an average heart rate over a couple of minutes before offering a VO2 Max estimate, average heart rate and single-word sum-up of your current overall condition.

These features may sound like they’re simply padding out the offering, but I found the Leg Recovery test particularly useful. It helped me avoid over-straining, which is all too easy to do at the moment during lockdown, when many folk may have upped their activity since there’s very little else to do.

So, the Vantage V2 is definitely a very capable tracker, one I can see meeting most triathletes and serious gym-goers’ needs. But there are a few minor annoyances. 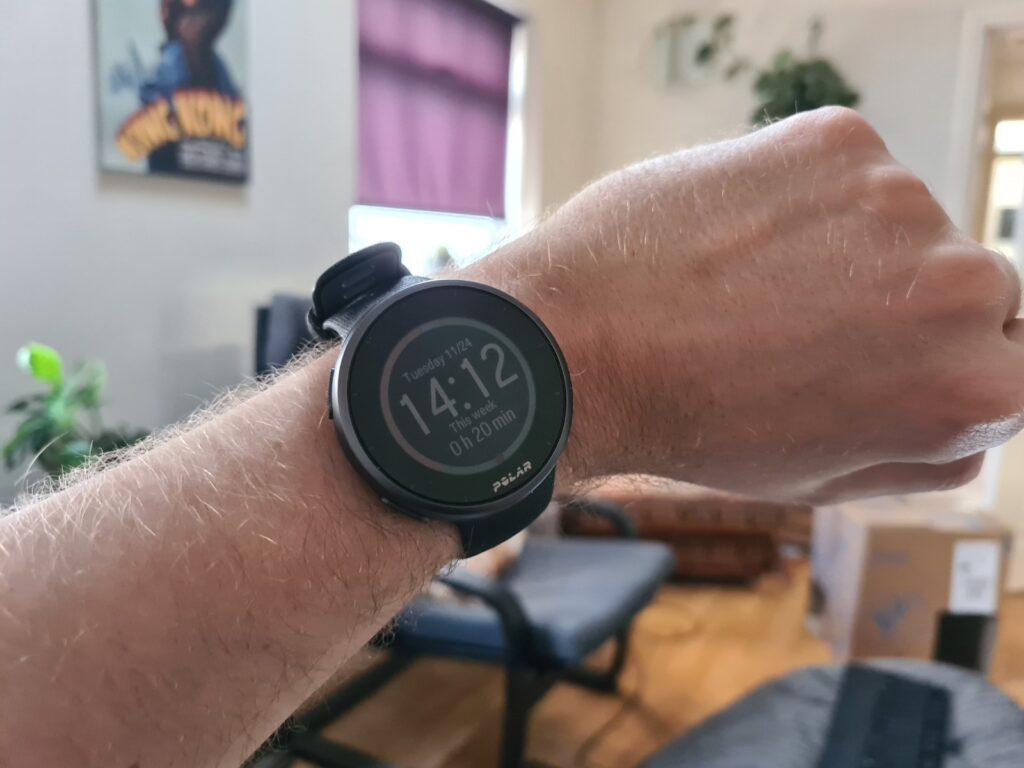 For starters, while on paper it claims to offer guided routes, the functionality isn’t as intuitive or developed as what you’ll find on the Garmin Forerunner devices. Routes can be set up and synced with the watch in the Polar Flow app, or Komoot.

The process is fairly intuitive and it’s easy to mark favourites. The only downside is that there’s no Strava route support. Considering how popular Strava is amongst runners, this feels a little odd for a wearable this price. The lack of TOPO maps, which adds data such as elevation, also puts its offering behind Garmin – which remains the top dog in this space.

The maps do offer turn-by-turn navigation via the watch, but the lack of built-in storage, or the ability to directly pair a set of headphones kills any chance of receiving audio prompts unless you have your phone with you.

Should you buy the Polar Vantage V2?

The Polar Vantage V2 is a solid GPS watch that will meet the needs of most triathletes and serious gym-goers. It offers solid GPS tracking for a variety of workouts and ticks all the boxes you’d expect of a smart sports watch at this price.

The only serious drawback is that the Garmin Forerunner 745 offers local music playback, slightly better out-of-the-box HRM tracking and maps functionality. However, it does so at the expense of a touchscreen and comes with a noticeably chunky design.