Without untethered GPS tracking, the Polar Unite will have a tricky time enticing fitness purists away from Fitbit, but there's a great deal here that beginners will love. Guided workouts, a clean UI and detailed sleep tracking make the Polar Unite one of the most approachable fitness trackers on the market.

Polar’s back with the Polar Unite – a wearable aimed squarely at the semi-affordable market dominated by the Fitbit Charge series.

2020’s been a landmark year for fitness trackers. Of course, against the backdrop of a global pandemic, it’s no wonder that people have been paying closer attention to their health and taking greater strides to improve their wellbeing.

Ahead of Fitbit’s 2020 line-up of devices hitting store shelves however, fitness company Polar has several new devices of its own to attract buyer, the premium Polar Grit X and the more wallet-friendly Polar Unite. As you’ve no doubt guessed, this review will focus on the latter.

Priced at £134.50, the Polar Unite is definitely – whether intentionally or not – going head to head against the superb Fitbit Charge 4 that launched late last year, and considering that’s one of the best fitness trackers it’s a tough fight. 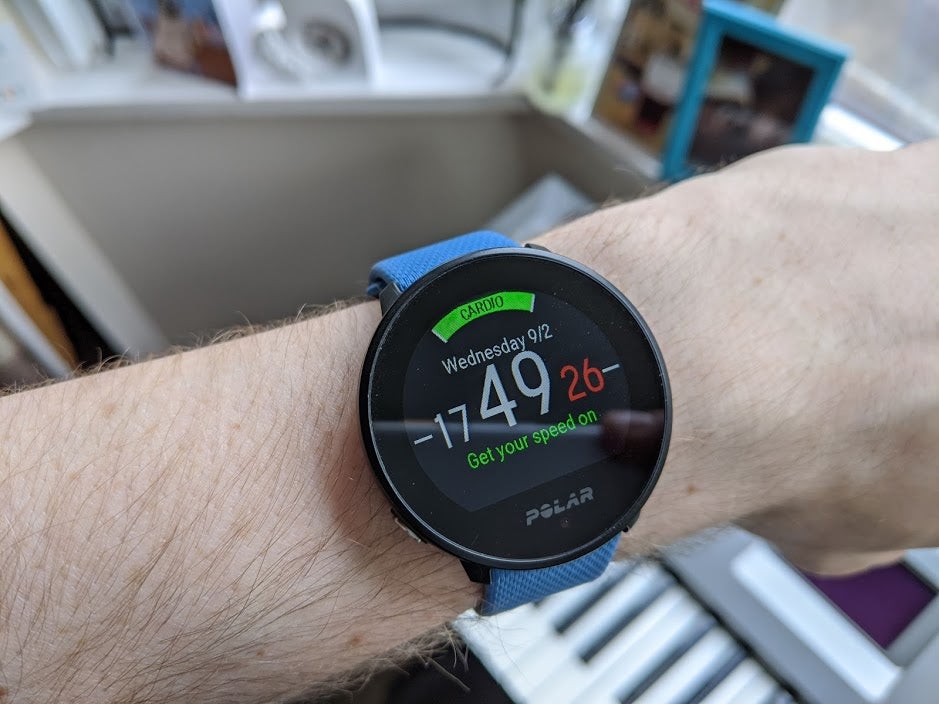 Design – the return of the flat tyre

Unlike its rival counterparts, the Polar Unite looks far more like a typical smartwatch from afar, albeit with a minimalist approach. With a sleek, round frame measuring 43.4 x 43.4 x 10.4 mm, and weighing in at just 32g, the Polar Unite feels incredibly lightweight on the wrist and never felt obtrusive during a workout.

Adding to its minimalist approach, the Polar Unite only boasts one physical button nestled away on the bottom left hand side of the watch. I’ll admit, I winced when I first saw the placement of said button. I’d become so used to the typical 2-3 button design on the right hand side that I wasn’t quite how such a deviation would even work.

What hadn’t occurred to me at the time is that this button was perfectly placed to be reached by your thumb whenever you bring your other hand over to the watch. Using my thumb in this way meant that I could also use my index finger to balance the watch – incredibly useful if your hands are feeling a bit jittery after an intense workout.

The function of this button is contextual however and will change depending on what the watch is doing. For instance, a simple press will wake the watch from sleep mode, while a long press will sync your workout metrics with the Polar Flow app on your smartphone. It also serves as the home button while navigating through menus.

For all other methods of input, the touch screen is required, and as you can see from the images featured in this review, the Polar Unite’s touch interface doesn’t encompass a full circle. That’s right; get ready to feel like it’s the early 2010s once more with the return of the flat tyre. 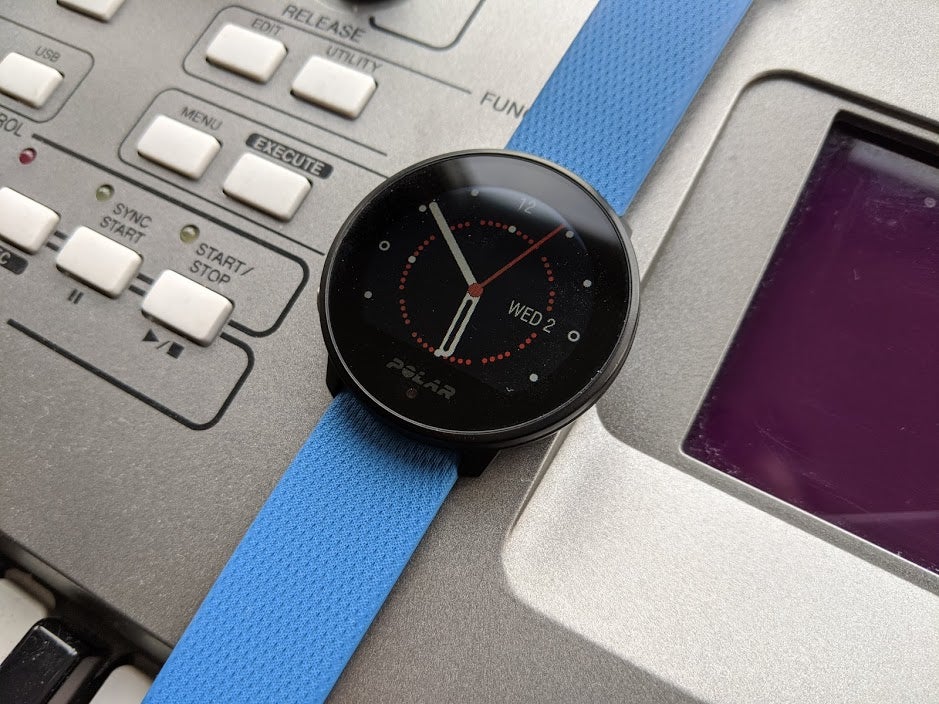 Given the affordability of the Polar Unite, having a flat-tyre design isn’t the worst thing in the world, and Polar has been clever in ensuring that the watch’s background is always a dark black, so more often that not you probably won’t even notice that it’s there.

The Polar Unite comes with a silicone watch strap, which is exactly what you need for any type of workout. Plus, the use of a snap and slip buckle ensures that you can take the watch off at a moment’s notice without worry.

Screen – old school, but does the job just fine

The Polar Unite uses a 240×204 colour touch display which might seem a little basic, especially when compared to modern smartwatches, but for a fitness tracker it does the job just fine. After all, the lower-end Fitbit devices have gotten by with rudimentary black and white displays for years, at least with the Unite there’s a dash of colour to spice up the affair.

Not too dissimilar to an e-ink display, the Polar Unite’s IPS TFT screen is easily readable in bright daylight, making it an ideal watch for outdoor runners as well as gym goers. Again, the flat-tyre design might be a sticking point for some, but it’s barely noticeable during everyday use.

Much like Garmin, Polar uses its own homegrown operating system on its wearable devices, and I have to say that the Polar Unite has one of the most brilliantly simple UI’s I’ve ever come across. I just can’t get enough of it.

Swiping left or right from the home screen will bring up different statistics ranging from your current heart rate to your sleep performance, all while showing you the time. I know that sounds like a low bar, but being able to keep tabs on the time as you’re scrolling through these tiles is a great little feature.

Admittedly, there are only two watch face styles to choose from (digital and analogue), but you can customise the colour arrangement used to complement whichever watch strap you’ve gone for. Back to the watch’s larger features, because the Polar Unite is designed to be a 24/7 device, it seamlessly tracks your sleep performance whenever you call it day.

The quality of your circadian rhythm, alongside all of your workout metrics, can be found within the accompanying Polar Flow app. I was pleasantly surprised to find that, despite the Polar Unite being on the cheaper end of the price scale, the Polar Flow app is actually one of the most fully-fledged of its kind, with a huge amount of detailed statistics to dive into, alongside tailor-made advice based on your performance. There’s even a regularly updated blog for all things fitness. 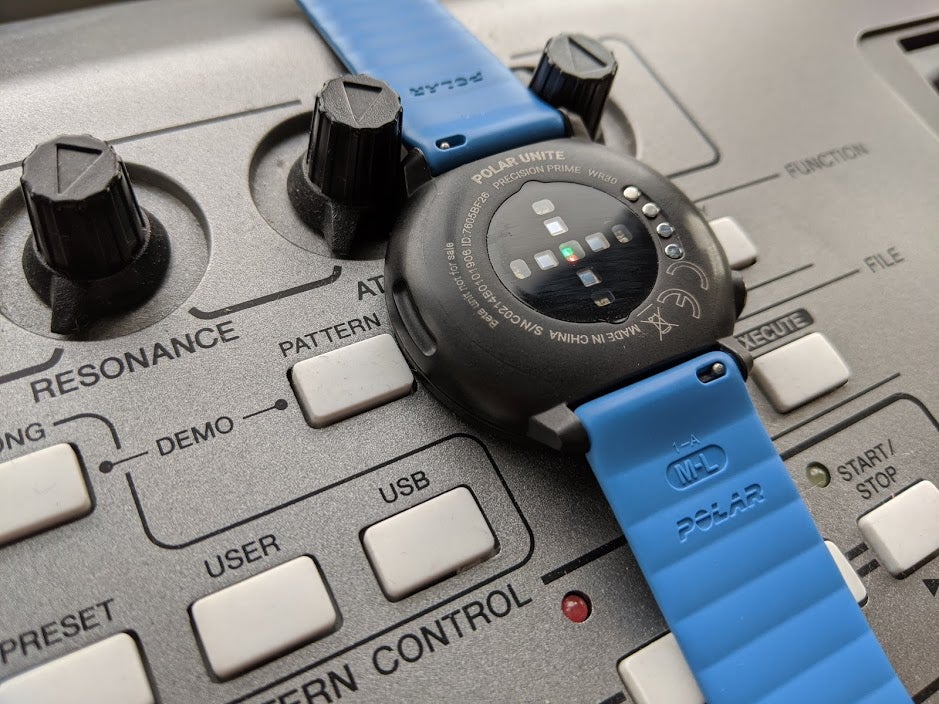 Unfortunately however, one of the reasons why the Polar Unite is so cheap is that unlike Polar’s more expensive Ignite fitness tracker, the former doesn’t pack built-in GPS tracking. As always, this means that you’ll need to bring your phone with you if you want to properly track the distance of your route.

There’s also the issue of the watch’s UI being noticeably slow from time to time. It’s not a deal breaker, but I did find myself struggling with some accidental touches/inputs not being recognised properly during use. These issues would only ever stick around for a moment or two, but they were a sore point in an otherwise feature packed device.

There is also water resistance of up to 30 metres, giving you all the more reason to visit your local swimming pool once it finally opens up again. With that high-end water protection, you also won’t have to worry about sweat getting on the device during an intense workout.

Fitness tracking – everything that a beginner could need

As if to shoot down low expectations based solely on the Polar Unite’s affordable price point – this is a device that goes above and beyond in the realm of fitness tracking. Right from the get-go, there’s an absurd number of exercises that the Polar Unite can track.

Much like Google Fit’s similarly exhausting list, you’ve got a wide range of trackable activities including ballroom dancing, indoor climbing and hiking. There’s even several sports listed, so if you prefer getting your heart rate up via a game of football or rugby, then the Polar Unite’s got you covered.

Polar has also partnered with home fitness service Les Mills to let you track your performance through some of the company’s patented workouts.

The best part of the Unite’s fitness tracking however is in its suggested workouts. At no extra cost to the user, the Polar Unite will suggest a workout based on your recent activity, from three separate types: strength, cardio, and supportive (stretching). 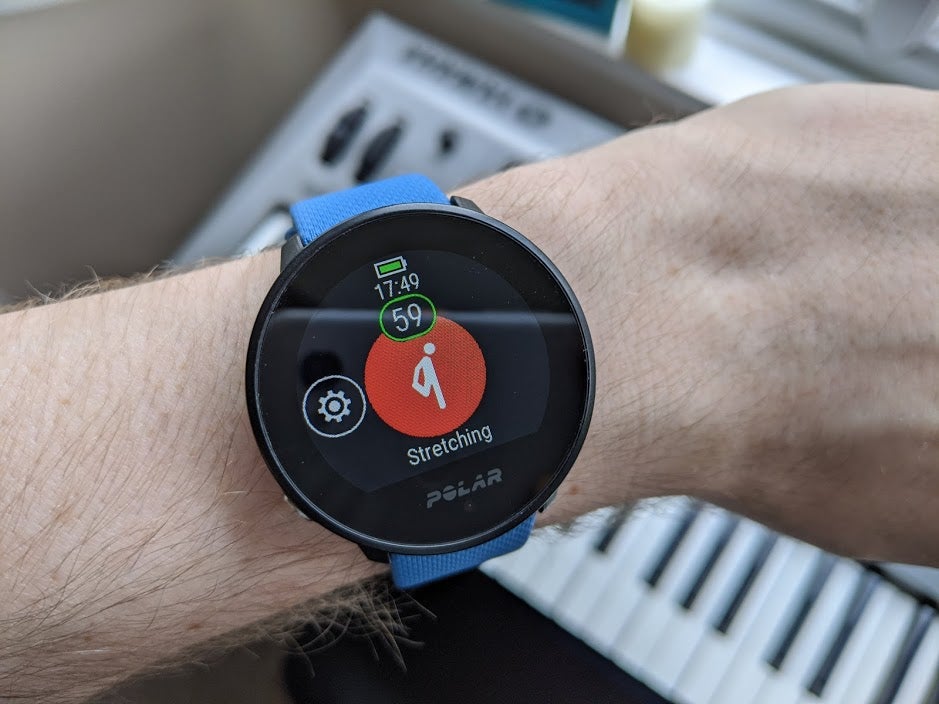 When it comes to exercise, a lot of people miss the fact that it’s a combination of all three of those workout styles that produce a good bill of health. The fact that all this is imbedded within the watch means that the Polar Unite is easily one of the best fitness trackers for beginners.

Of course, being known for its high-end heart rate straps, you’d expect Polar’s wearables to have a decent read on your heart rate – and this is largely the case here. Wearing the Whoop Strap on my other wrist, the two trackers largely aligned but there were a few discrepancies. For a more accurate reading however, you can connect one of Polar’s heart rate straps wirelessly to the watch.

Polar touts the Unite smartwatch as having a four-day battery life, and a 50-hour lifespan in training mode. While I’m not quite at the level of physical perfection to endure a 50-hour workout, I was able to get around three and half days of use with a 30-50 minute workout each day. That includes nightly use, with the watch tracking my sleeping pattern.

While there are definitely longer-lasting fitness trackers out there, three and a half days is not bad and a sure sight better than the likes of the Apple Watch Series 5 or almost all Wear OS smartwatches. What helps matters is the fact that you can fully charge the Polar Unite in just shy of an hour. Prepare yourself for a slight shock when you see the Unite’s charging cable though – it’s more of a dongle be to used on the side of a laptop.

Should you buy the Polar Unite?

If the Polar Unite had built-in GPS and a faster processor, it could very well have nabbed a full five-star rating. With the slightly cheaper Fitbit Charge 4 now offering GPS however, the Polar Unite might be a tough sell for fitness enthusiasts.

For beginners however, I can’t think of a better choice to kick-start your fitness journey than the Polar Unite. With guided workouts, sleep tracking and tailor-made advice that you can use to improve your health, you’ll definitely get a lot more done with the Polar Unite on your wrist.