Its name is synonymous with accurate heart rate tracking, but this is Polar’s first device to be aimed at average Joes who just want to move more.

The A360 measures steps and sleep, while keeping a track of calories burned and letting you log exercise sessions. It has a colour screen and can receive notifications from your phone. All the information the A360 records is synced with the Polar Flow app and website, which lets you analyse your data and offers basic feedback and coaching tips.

With a claimed 14-day battery life and slimline design, the A360 is intended to be worn 24/7. However, there’s no GPS, so it isn’t one for tracking your runs and rides. Being able to measure heart rate makes it more advanced than your average activity tracker and a great choice if rather than just wanting to move a little more, you’re keen to take a more serious approach to exercise.

The Polar A360 has a silicon strap – I opted for white, but pink and black ones are also available, too – is silky-smooth and attaches via two metal button fasteners that keep the band firmly in place.

The actual unit where all the magic happens is plenty big enough to check the time or your heart rate at a glance, but compact enough not to attract strange looks from people thinking you’re a home-arrest fugitive. The touchscreen is meant to come on when you twist your wrist to look at it, but often I found it refused to play ball and I had to tap the button on the side. Annoying, but no biggie. 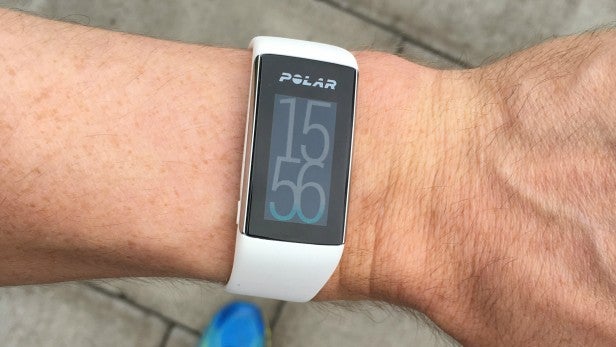 One major complaint I do have about the A360’s design, however, is how easily the main unit can pop out of the wristband. Twice while running it managed to almost detach entirely, and on both occasions I didn’t feel it coming loose. I only managed to save it from being involuntarily jettisoned because I looked over to check my heart rate. I thought I may have a defective unit, but having checked online this appears to be fairly common complaint. My inelegant, yet effective, solution? Two tiny bits of Gorilla Tape to hold it in place. 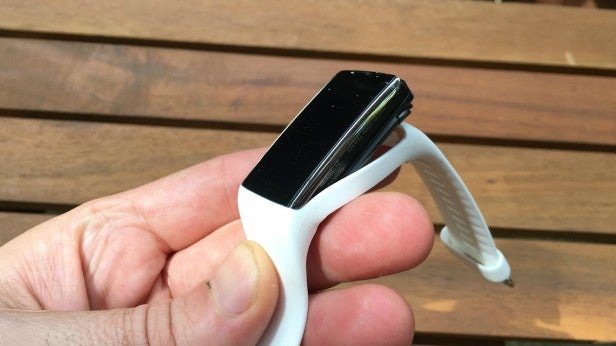 Following a few minor issues – thanks Polar, for letting me watch a video tutorial explaining initial setup right after having completed the initial setup – I was logged into the Polar Flow website and app.

The sight of all those empty graphs and pie charts had me raring to go, and slipping on the A360 for the first time, I loved how light and comfortable it felt, especially compared to chunkier activity trackers such as the Microsoft Band 2.

Polar A360 – Tracking and software

During initial setup you choose the amount of activity you want to aim for from five different levels. Your progress towards that goal is shown as a blue rising level that’s visible whenever you check the time.

Slide up on the homescreen and select “My Day” to view your total steps, estimated distance walked and calories burned. You’ll receive an “Inactivity alert” to get you moving if the A360 detects a lack of movement for more than an hour during the day. Unfortunately, simply standing up and sitting back down again gets it off your back – but obviously, we don’t recommend you do this if you’re serious about being more active. 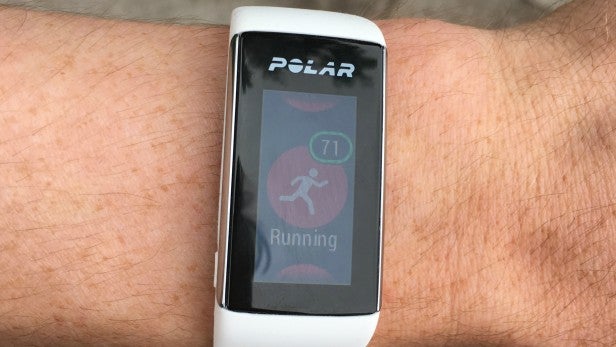 Sleep is monitored automatically, without the A360 needing to be told you’re hitting the hay, and it’s the first tracker I’ve used that’s smart enough to know the difference between me having a nap and sitting at my desk for the afternoon.

Conversely, the A360 does need to be notified when you start exercising and also of the type of workout you’re going to do – you can choose between Running, Cycling, Group Exercise, Strength Training, Other Indoor and Other Outdoor. This is so that it can activate the heart rate monitor and estimate calories burned more accurately.

I compared calorie burn with an Apple Watch while cycling and running and was pleased to see nearly identical results. 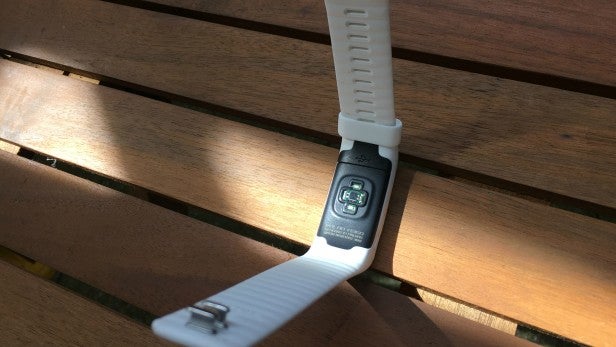 I also compared heart rate data using an Apple Watch with a Polar chest strap. Unfortunately, it was frustrating to see the A360 suffer the same issues experience by the Apple Watch.

Overall, it yields accurate results, but the A360 struggles to keep up during interval training where you’re constantly switching intensity. Having said that, doing that kind of exercise doesn’t generally leave time to check your wrist.

The main purpose of the heart rate monitor while doing steady-state cardio – aside from allowing the A360 to better estimate calorie burn – is to see which heart rate zone you’re currently in. It works perfectly for this purpose and even has colour-coded zones to make it easy to check at a glance – when the screen comes on, that is. However, it would have proved better if you were able to set a specific heart rate zone in which to train and be notified by vibration when straying from it.

Its lack of GPS prevents me from recommending the A360 if you’re looking to accurately track running and cycling sessions. It’s a frustrating omission considering competing products at a similar price include such functionality. It means that the A360 can only estimate, with varying results, pace and distance. My usual 10km run was recorded anywhere between 9km to 9.8km, but consistently sold me short.

Being waterproof up to 30m means you can wear the A360 while swimming, but the heart rate monitor rarely works in the water and without being able to record lengths, strokes or any other specifics, it’s a little pointless.

In other words, this is definitely an advanced activity tracker rather than a basic sports watch. 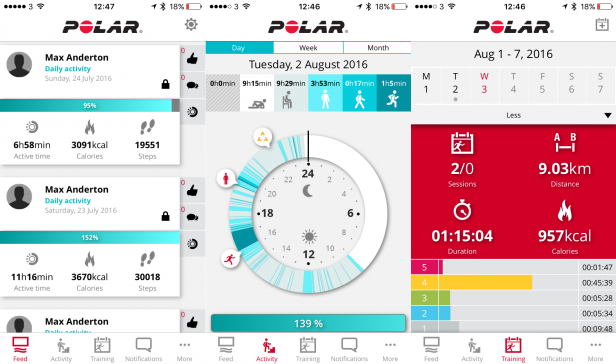 Polar Flow creates separate reports for your activity, training and running, with each able to display your data is numerous formats.

You’re shown your most active days, along with the benefits of your current level of activity, and tips on how to improve it. You also get Training Benefit assessments. For example, I ran 5K and the Polar Flow correctly categorised it as a tempo training session. It gave me some praise (“Great pace!”) and then explained the benefits (“You improved your aerobic fitness, speed, and ability to sustain high-intensity effort for longer”). It had the desired effect: I felt rewarded and motivated.

A browser-based dashboard is also available

Still, it’s as effective as any other sleep-tracking device in making you reassess your approach to bedtime, and can be a useful tool in your quest for more quality sleep. Surprisingly – and a little sadly – it turns out that a coffee in the evening affects the amount of restful sleep I get far less than a glass of wine or a couple of beers. A shame.

Polar A360 – Battery life and charging

While Polar rate the A360 as having 14-day battery life, in testing I only managed 10 when logging training sessions most days. It’s still a respectable amount. Charging is handled over a standard Micro USB cable, which is a positive, but you’ll need to pop the tracker out of its wristband.

The Polar A360 is a decent choice if you’re no stranger to exercise but not obsessive about it, and want an activity tracker that provides a good idea of the amount of calories you burn. The A360 is good for steady-state heart rate training, as long as you don’t mind checking what zone you’re in, and it has an impressive battery life too. But for the money, GPS feels like a big omission compared to competing devices.

The Polar A360 is a decent choice for anyone looking to be more active, but it can’t quite keep pace with similar rivals.