Exclusive to Nintendo Wii U
Bandai Namco hasn’t shied away from crossovers, first bringing the likes of Link, Darth Vader and The Master Chief into Soul Calibur, then mixing its characters with Capcom’s for Street Fighter X tekken. With Pokkén Tournament, however, it’s created its most bizarre blend yet. This is Tekken meets Pokémon, with Bandai Namco working to combine the hard-hitting combat of the former with the cutesy charm and cuddly monsters of the latter. Mission impossible, you’d think.

Well, you’d be wrong. Perhaps Pokken Tournament isn’t all the game it could have been, but it’s far from a disaster either. That’s because it’s more than just a reskinned Tekken, and because the team has done a great job of making a more accessible style of fighting game. That doesn’t mean there aren’t layers of depth or strategy, either. In fact, Pokkén Tournament might be the developer’s most radical beat-em-up in years. 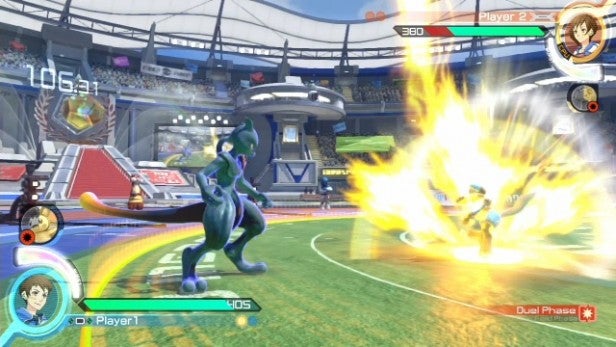 It all comes back to the core combat mechanics. When Pikachu takes on Lucario or Charizard battles Gengar, the action takes place in two distinct styles or ‘phases’. In the first phase, you have full 3D movement with the camera set behind your Poké-pugilist, and you can either use ranged attacks to wear your opponent down or close in for some harder-hitting blows and combos. Connect with a few of these and the game switches quickly to phase 2 for more straightforward, 2D Tekken-style combat. Lash out with a devastating attack, and the game shifts phases once again, taking you back to phase 1. It sounds weird, but you get used to it fairly quickly.

Meanwhile, as you battle and phase-shift, the synergy meter on the screen is building up. Wait ’til it fills then grab the L and R bumpers and you’ll activate burst mode; a super-charged state where your character dishes out more damage. While in burst mode you can also unleash your Pokémon’s burst attack – a spectacular, multi-stage affair that can wipe a good third of your opponents health bar in a jiffy. That’s if it connects, of course. Block, dodge or counter at the right moment and your opponent’s burst attack counts for nothing, giving you a good chance to unleash your own. 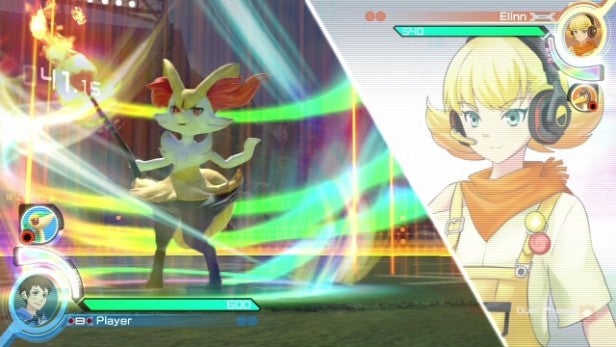 We’re not finished yet, though. As a budding Pokémon trainer, you maintain a stable of Pokémon to deploy in a supporting role. Wait until the support gauge charges up and you can tag them in, calling in a secondary attack for extra damage, buffs to speed you up or slow your opponent down, a handy health recharge, a counter or any one of a range of other helpful effects. Needless to say, your opponent can do the same, sometimes transforming a round from a foregone conclusion into a last-minute turnaround.

There’s a progression system in here too. Fights won in the single-player campaign level up your Pokémon, allowing you to boost their offensive and defensive capabilities or reduce their support and burst cool-downs and timers. You’ll also win new outfits and customisation options for your trainer, new costumes for your friend and mentor, Nia, and – best of all – new pairs of support Pokémon (they come in twos so you can switch mid-match). The more you play, the more tactical options you develop. 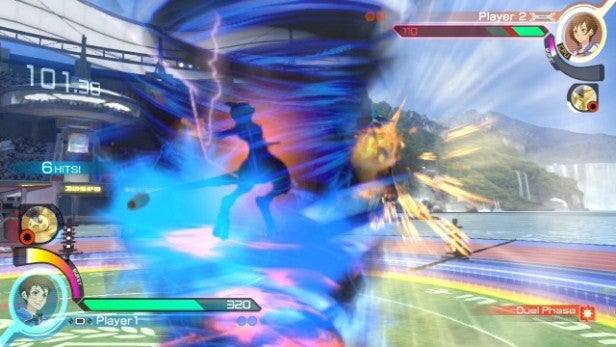 In short, we have a fighting game that embraces aspects of Pokémon as well as aspects of Tekken. Not only do you get the fast, furious fighting of the classic Bandai Namco series, but a chance for the combative critters to show off their best ranged moves, plus some pretty awesome super-special attacks and a hint of collecting too.

What’s more, systems that sound complex turn out to be quite accessible, not least because Pokkén Tournament features excellent tutorials and a great learning mode that gets you a smattering of combos in no time. Nor is this a game of complex combo strings and rapid-fire chains of d-pad moves and button presses. You can do a lot with good timing, simple combos involving pairs of buttons and a working knowledge of what the game calls ‘the attack triangle’, where normal attacks beat throws, throws beat counters and counters beat normal attacks. 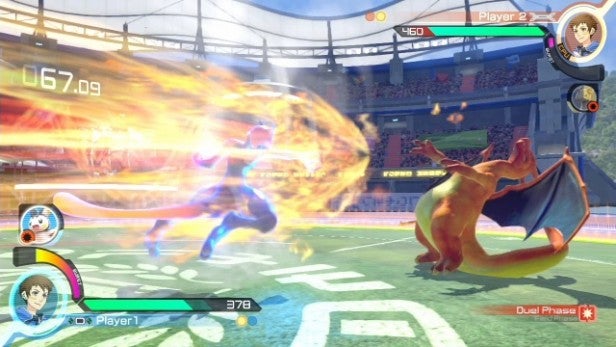 Each Pokémon has its own strengths and weaknesses, as well as their own variations on the core moves. This makes playing as a tough, fast brawler like Lucario a very different experience from playing as a slower but more brutal damage dealer like Charizard, and you’ll also find that some of the seemingly weaker Pokémon have their own unexpected special moves, not to mention faster charging of the support or synergy meters. It would have been nice to have seen more than 16 fighters, but the roster is a good one, picking out established favourites and less familiar stars with fighting skills. Simply watching them all go through their combos and moves is a lot of fun.

All this stuff makes Pokken a very entertaining quickfire fighting game where you don’t have to be a combat stick-wielding master to do well. The downside of this is that it’s also a rather spam-heavy fighting game. You can go a long way through the single-player campaign by chaining together hard-hitting moves, using your support Pokémon as backup and calling in burst mode when you need a decisive blow. And while learning how and when to block and counter helps, you will eventually find yourself on the sharp end of this, getting smashed to bits by another player or the CPU before you get a chance to gain a foothold in the match. 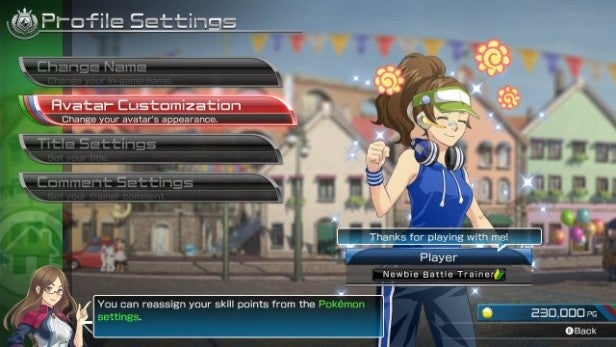 On balance, that’s the price of accessibility, and I’d say that Bandai Namco has been smart in prioritising the needs of the Pokémon audience over those of the hardcore beat-em-up fan. If anything, Pokkén Tournament goes wrong in not taking that approach quite far enough.

Take the single-player campaign for example. There’s a sort-of story that sees your newbie trainer working his or her way through a series of leagues, but nothing of the exploration or discovery of a real Pokémon game, while the collecting and training elements are pretty cursory. There’s barely any plot and the only characters you hear from are (far too briefly) rival trainers and (all too regularly), Nia. If you enjoy hearing the same lines of dialogue being dished out ad-nauseum, Pokkén Tournament has you covered. If not, Nia will annoy you ceaselessly until you find the option to minimise her input.

Beyond the campaign and the training modes you’re stuck with a simple casual match mode or one-off battles, a local versus mode and online battles. That’s it. 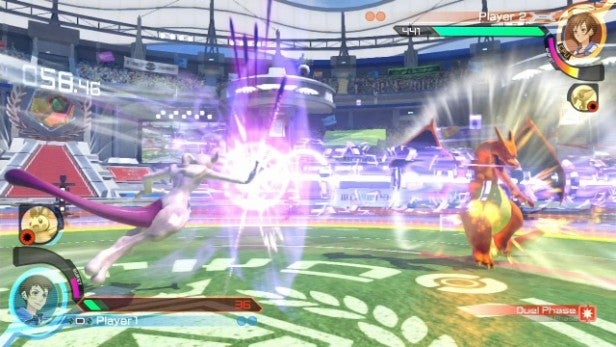 It’s not much of a looker, either. Pokémon fans will enjoy the way their favourites are bought to life in smoothly-animated 3D, but Pokkén Tournament doesn’t have the movie-quality lighting or detailed textures of Nintendo’s best first-party Wii U games, while the arenas vary between the brilliant – a Pokémon theme park or a haunted house – and the dull and lifeless, with the stadium and volcanic stages a low point. We don’t expect a Wii U game to compete with Street Fighter V on the PS4, but this isn’t up to the same standard as Bandai Namco’s work on the Xbox 360 and PS3.

The campaign is reasonably lengthy by fighting game standards, but it’s the local and online versus play that will give Pokkén Tournament its longevity. Local combat involves one player on the Wii U Pad with a second on a Pro Controller, with the first player’s view on the Wii U Pad’s screen; another thing that gives Pokkén Tournament a very different feel. Online combat, meanwhile, gives you a choice of ranked or casual matches, with CPU-controlled opponents stepping in if you’re waiting too long for the effective matchmaking systems to work. With only a handful of players online before launch it’s hard to judge, but Pokkén Tournament seems to deliver a pretty smooth, lag-free online scrap without any major trouble.

Verdict
Not content with putting Tekken in a Pokémon skin, Pokkén Tournament does its best to bridge the two worlds in one innovative fighter. In terms of the core combat it’s succeeded, and Poké-enthusiasts will love to watch their favourites battle it out in a whole new way. However, Pokkén Tournament doesn’t go quite far enough to capture the exploration, collection and training aspects of the classic series. It’s going to please an awful lot of Poké-fans, but it’s not quite gonna catch ’em all.