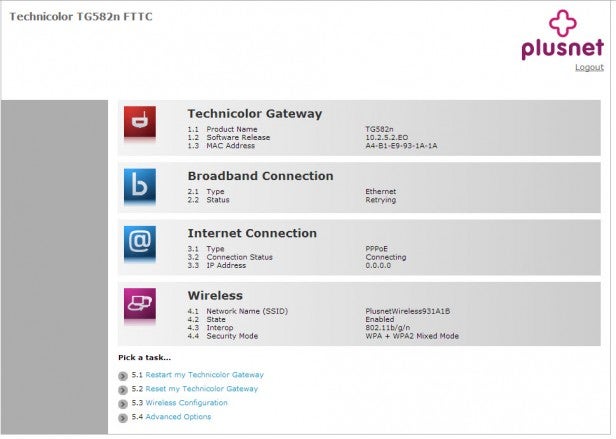 Given you’ll have spotted the TG582n is a rather basic router you’ll be pleased to know its setup process is similarly stripped down. Connect it up and use the key printed on the bottom of the router to connect to its WiFi and you’re away.

If you do want to change some settings you won’t be surprised to learn the TG582n eschews more modern URLs from its settings and you’ll find them instead by typing 192.168.1.254 into your web browser. A nice touch is the admin password is set to the router’s serial number so each one is unique and given many households don’t change their basic router settings, avoiding the default password of ‘admin’ or ‘password’ is to be applauded.

Against this is that the router UI is archaic. Traffic management requires individually typing in device IP addresses and its hyperlinked text to indicate clickable links is a mile away from the slick, Cloud-based drag and drop interface of something like the Linksys Smart WiFi platform.

So the TG582n is pretty ugly, its functionality is basic and its settings seem to come from an era before animation… all of which means its performance will be an absolutely disaster? Surprisingly, not entirely. 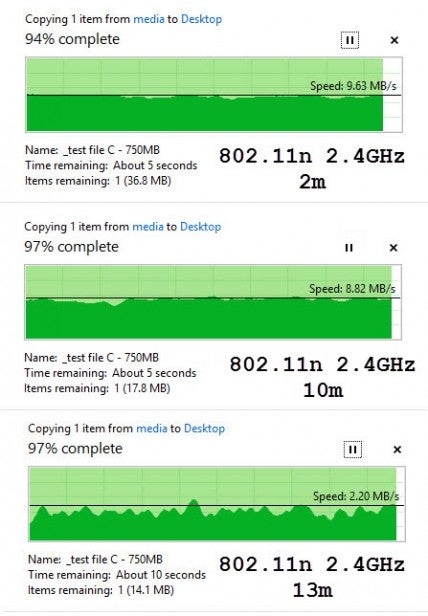 We put the TG582n through its paces in our residential test environment and it recorded speeds of 9.63 megabytes per second (77 megabits per second), 8.82MBps (70.6Mbps) and 2.2MBps (17.6Mbps) at two metres and 10 metres line of sight and 13 metres behind two standing walls.

This means the TG582n can – by the skin of its teeth – provide close range wireless speeds above the 76Mbps fibre broadband packages PlusNet supplies. In addition it operates above the 62.7Mbps average Ofcom claims is the average for 76Mbit fibre connections at both 2m and 10m with line of sight to the router.

All of which shows 802.11n 5GHz wireless really should be a mandatory requirement for any fibre optic broadband router. After all we don’t buy fibre broadband services to only get the speed we pay for without walls or doors in the way.

As for USB, speeds were disappointing with the TG582n hitting just 1.42MBps (11.36Mbps) – enough to stream HD video, but this functionality will quickly drop away with distance. Another let down is TG582n only supports external storage formatted with FAT32, a format which doesn’t accept file sizes above 4GB which therefore suppers HD film options. NTFS has been part of mainstream computing since the turn of the century, so this omission is a shocker.

Should I buy the PlusNet Fibre router?

In a word, no. The TG582n is yesterday’s technology trying to scrape by and supply today’s broadband advances. The good news is it does at least supply close range wireless speeds capable of PlusNet’s 76Mbit service, but only just. Whether this makes it fit for purpose is debatable.

For those looking to future proof the 802.11ac compliant Asus RT-AC66U, D-Link DIR-868L and Linksys EA6700 provide blazing dual band wireless n and with ac compliant equipment they can top 35MBps (280Mbps) at close range and over 24MBps (in excess of 190Mbps) even at 13m behind two standing walls. If you can afford it, their circa £150 RRPs are well worth the investment.

The TG582n is hopefully part of a fading trend to supply single band routers with fibre optic broadband services. Unlike the Sky Hub it can achieve its provider’s wireless speeds at close proximity, but make no mistake this is an outdated product in both design and features and we would advise all customers to seek out a dual band third party router instead.