In the world of optical drives, there is one name that stands head and shoulders above the competition when it comes to performance and quality, and that name is Plextor. Plextor has been at the cutting edge of optical technology for as long as I can remember – I even connected an external SCSI Plextor CD-ROM drive to a Silicon Graphics Indigo 2 Extreme workstation way back in the early nineties. Pretty much every PC that I’ve built has had a Plextor optical drive sitting in one of the 5.25in bays, and even now there’s a Plextor DVD writer in my current PC.

As always though, you get what you pay for, and Plextor drives tend to carry a price premium over their competitors. Now, there was a time when it was worth swallowing that extra cost since Plextor units were so much faster than other drives, but the competition has been nipping at Plextor’s heels for a while now and the performance gap is definitely closing. That said, the PX-716A is still the fastest DVD writer that I’ve ever tested.


Looking at the basic specs the PX-716A doesn’t look anything special – 16x DVD+/-R, 4x DVD+R DL, 8x DVD+RW, 4x DVD-RW, 48x CD-R and 24x CD-RW. However, a quick firmware flash boosted DVD+R DL speed up to 6x and DVD-RW up to 6x, while also enabling DVD-R DL support. Of course there’s still no DVD+R 8x, DVD-R 6x or DVD-R DL media, so despite having the ability, the drive couldn’t prove itself in these areas. That said, like all the drives I’ve looked at recently, the PX-716A did manage to over-burn to 2.4x DVD+R DL media, turning in some blistering times. 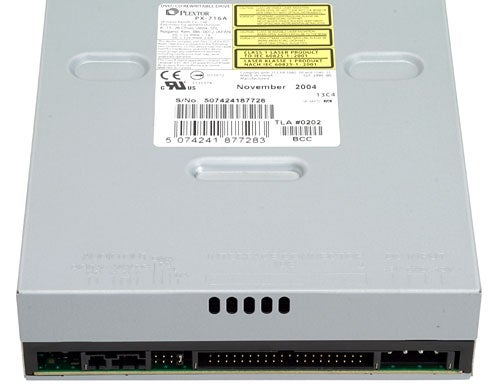 Looking at the tests, the Plextor managed to burn 7.9GB of data to a DVD+R DL disc in only 17 minutes 51 seconds – that’s over a minute faster than the previous record holder, the Asus DRW-1608P. Like many of the drives I’ve seen recently, the PX-716A had a few issues burning to DVD+R media, turning in some alarmingly high times, but then managing to produce more acceptable results when I reran the test a couple of times. It seems that most of the drives around at the moment have intermittent issues with the 16x DVD+R media, so it’s not something that I can hold against the Plextor in particular.

Most of the test results that the PX-716A turned in are on a par with the competition, but it did manage to be fairly consistent across the board, although the CD-RW times were particularly quick.

The drive itself looks pretty much identical to the previous Plextor drives I’ve looked at in the past. The draw has a glossy black plastic strip along the bottom to give the drive a bit more character than your average DVD writer. Other than that, there’s a single eject button, an indicator light and a manual eject hole. If you don’t like the way the drive looks, you can always change the fascia – Plextor supplies a black fascia in the box so that the PX-716A will slip comfortably into a black case.


There’s the usual array of Plextor goodies in the box – besides the black fascia, you also get an IDE cable, a paper manual, a CD manual and a comprehensive software suite. As well as the excellent PlexTools, you also get Nero Express 6 SE, Nero Media Player, Pinnacle Instand CD/DVD 8.3 LE. Instant Cinema. Instant Audio. Instant Copy and Instant Backup. Plextor also lists a whole raft of software from CyberLink, Sonic, Ulead and some more stuff from Nero – however, don’t be fooled since these are all 30 day trial versions and not the full packages. 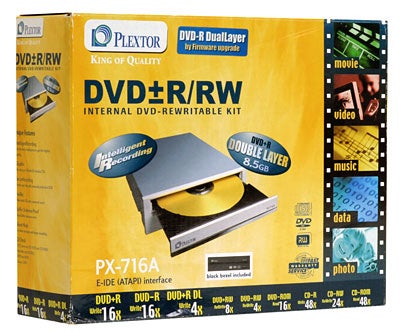 So, the Plextor PX-716A is a fast DVD writer, with a good but overly embellished software bundle and a strong heritage – but how much are you expected to pay for performance and quality? Well bizarrely, I actually found the full retail box selling for less than the bare drive on dabs.com, with a price of £74.92 compared with £75.28. But when you consider that dabs.com is selling the Asus DRW-1608P for only £46.94 and you can get the Toshiba SDR-5372 (albeit a bare drive) for only £36.42 from eBuyer.com, the Plextor starts to look very overpriced.


Ultimately, the PX-716A does smack of high quality and its performance credentials are unquestionable, but not only are its competitors snapping at its heels when it comes to performance, they’re also offering significantly better value.


Once again Plextor has produced the fastest DVD writer out there, but with the competition close behind, it’s hard to justify the high asking price.