Via its PS3 and PS4 consoles, Sony is making a brazen attempt to conquer the world of TV, with monthly packages offering access to live and on demand TV with plenty of localised content. Is this the cord-cutting solution we’ve been waiting for?

Traditionally, it has been Microsoft, through its Xbox consoles that have been obsessed with creating that elusive, all-in-one video hub.

So it came as somewhat of a surprise when gaming-focus Sony announced the PlayStation consoles were to become home to a cutting edge television streaming service, that aimed to provide the perfect out for those seeking to cut the cord and ditch traditional cable and satellite packages.

PlayStation Vue’s no-commitment monthly tariffs offer a range of channel bundles available to stream live and on-demand over the user’s broadband connection, promising savings, more freedom of choice and negating the need for additional equipment beyond the PlayStations customers already have in their home.

PlayStation Vue was initially trialled in Chicago, New York, LA and Philly before expanding to Dallas and now my neck of the woods, Miami, gets to try it on for size.

Can it really replace my cable subscription? Let’s find out. 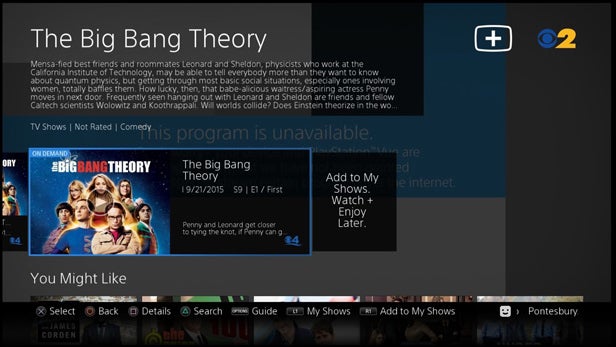 The Access platform offers 50+ channels for $49.99. This gives you all of the free to air broadcast networks ABC, CBS, NBC, Fox. However, the major boon here is that all of the content will be locally themed. So you’ll get local news, weather and locally-themed programing from the affiliate stations. This is what Apple has been attempting to hammer out with content providers for its service and also explains why PS Vue is only available in a few markets at present.

On a national level, you’ll get content that traditionally likes to stay behind the Pay TV firewall. Networks like FX, Comedy Central, USA, Discovery, Food Network, AMC, TNT, as well as sports channels from Fox, NBC and all the major 24-hour news channels.

For $10 more, you can get the Core package, which adds local sports into the mix. This is a big pull as national on demand services like NBA TV and MLB.TV don’t offer in-market sports content because of the exclusive TV deals with, in the case of this city, Fox Sports Florida.

The top package is Elite, which is $69.99. This seems a bit superfluous to be honest. It adds a host of second tier channels like Esquire, Nat Geo Wild and The Golf Channel. Those 80 channels sort of match the line up offered by cable, but it’s by no means a full house.

If I were buying this, I’m all in on the Core package, but as I’m trialling for 7 days free of charge then Elite it is! 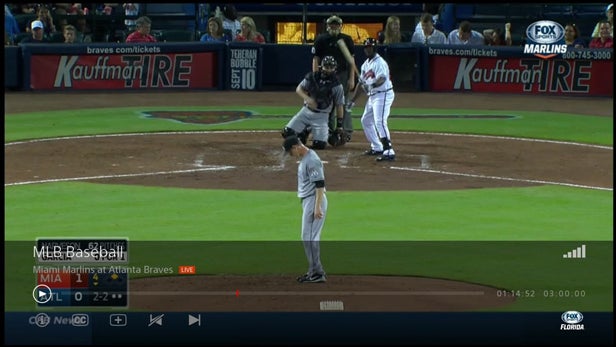 This is going to be a deal-breaker for some: There’s no ESPN. There’s no HBO and Showtime is only available as a standalone service for $10.99 a month ($8.99 to PS Plus members). Those three are the crown jewels of American TV. BBC America wouldn’t go amiss for this ex-pat either.

There’s currently still no way to get ESPN as a standalone streaming service (although it is available on PS Vue’s only real rival, Sling TV), while HBO Now will cost you $15 a month.

When it’s all totted up. Up to $70 for PS Vue, plus $11 for Showtime and $15 for HBO Now, then you probably won’t be saving much if you have a relatively decent cable deal.

Considering that local broadcast channels are free to watch through a digital aerial, you’re just effectively paying for those cable channels too.

Another thing to consider is the access to all of the on-demand platforms a traditional cable subscription offers as a bonus won’t be available to PS Vue subscribers. They would be a big loss for me.

So, as a value proposition, PlayStation Vue doesn’t really stack up. The only boon in this department is the ability to cancel at any time. 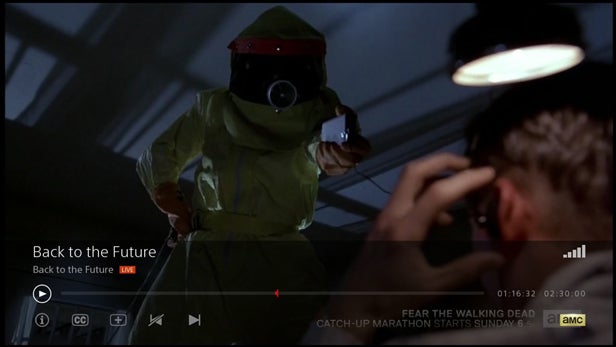 There’s a good mix of live television and on demand content available through PS Vue. When scanning the programme guide, you’ll be able to tune into the live stream, but some previous programming has a blue marker to let you know it’s available on demand.

One of the coolest things you can do with PlayStation Vue is to identify a show (either via the guide or search) and then tap R1 to add it to your shows. This will record the next episodes on a (seemingly unlimited) cloud-based DVR and allow you to catch it on demand. Alternatively, it’ll let you access the shows already available on demand.

Recorded shows last for 28 days, which is plenty of time to catch up. 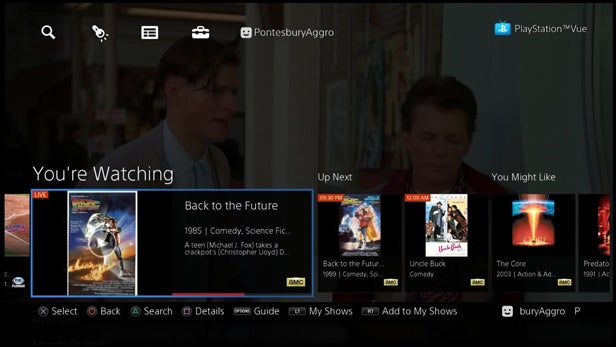 The PlayStation Vue interfaces is a break from the norm as channels are listed at the top of the screen, rather than side on. In that respect, it’s more akin to the TV listings you’d see in a newspaper or magazine. There’s a red-line that runs horizontally across the screen informing the viewer what’s on now.

Getting to the channel of your choice can be a little bit of a pain though. You may remember the numbers of your favourite channels on your cable or satellite box, but there there are no shortcuts here. You can add channels to Favourites (R1) in order for them to appear at the front of the guide, while pressing R2 speeds up the scanning

You can return to the guide at any time by pressing the Options button, while ‘My Shows’ can be accessed by tapping L1 at any time. Elsewhere, all of the media playback and interface controls (play, scan, exit, etc.) are what you’ll expect as a PlayStation user. 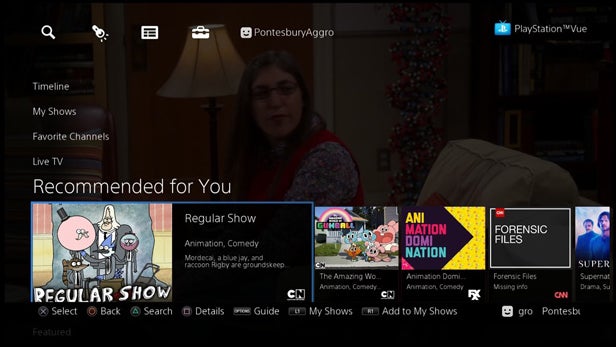 This is an area where Sony’s service performs well. Tapping the triangle button immediately brings up a search field, allowing you to quickly find shows (albeit not channels) of your choice. Typing ‘S’ brings up South Park, etc.

Recommendations are pretty powerful too. There’s a strong ‘Shows You Might Like’ line up, which appears beneath the landing page for a particular piece of content. There’s also a solid Recommended For You tool based on your viewing history. All in all, finding stuff you want to watch on PS Vue won’t be too much of a problem, even if it hasn’t aired yet. You’ll be able to add future programming to My Shows. 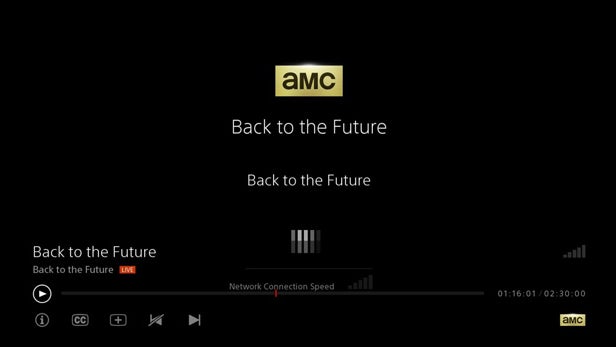 This is as good as you can expect from a streaming platform. There were no long waits for channels to load, while service ran uninterrupted and without buffering (although much of that will be dependent on an individual’s broadband connection).

I tried flicking back and forth between my live cable TV service and the PS Vue offering and the later only seemed about 30 seconds behind the live TV feed. That’s not bad going really.

Here’s a little tip though. Even if you hit the PS button to exit PlayStation Vue, the content apparently continues to play in the background, chewing through the GBs like nobody’s business. I inadvertently racked up 25GB of data in one day testing PS Vue, so make sure you stop the content before exiting. Realistically, you’ll need unmetered broadband if you want to make this your sole method of viewing. 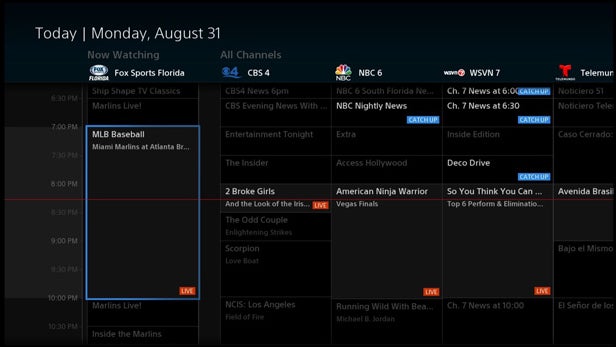 Very recently, Sony outed an iPad app to allow users to watch PlayStation Vue on another screen or outside of the home. This was most welcome. Everything is synced nicely and the two interfaces match up very well, although some content is restricted or blacked out on mobile. Only iPad users can jump aboard at the moment though sadly. 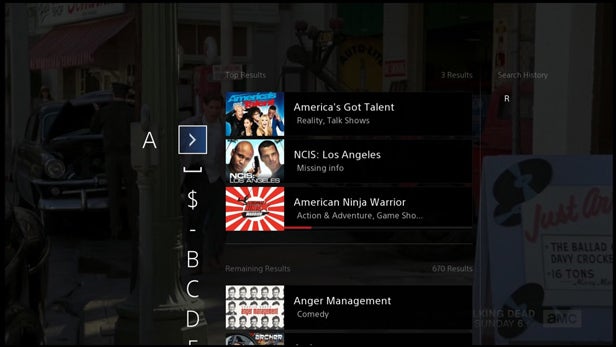 PlayStation Vue: Can it replace cable?

So, as a huge advocate for the a la carte, cord-cutting TV revolution, is PlayStation Vue going to prompt me into ditching cable? The answer is no; at least not yet.

If anything my experiences with PS Vue, although not a bad platform by any means, have made me more appreciative of what cable provides.

If I wanted the same experience, there probably wouldn’t be much in it in terms of price, but then I still can’t get ESPN, fully live TV and I still can’t access all of those individual channels’ on-demand platforms on multiple devices, such as my Apple TV.

This will suit those who don’t want the grand buffet, but just a decent selection of stuff to watch. For $50 a month the Access package definitely offers some savings, without the hassle of extra equipment. The $60 a month Core package certainly frees plenty of live local sport from cable’s grasp too. That’s a big win for PS Vue.

The interface is good, cloud DVR is very useful and search and recommendations are an upgrade on what’s offered by most traditional TV providers. All in all I enjoyed using PlayStation Vue and could definitely make do, but this is definitely a case of the idea being slightly ahead of the execution right now.