Available on Xbox One, PS4, PC (Xbox One and PS4 versions tested)

With Garden Warfare 2, it’s time to stop treating the Plants vs. Zombies spin-off as a joke. Maybe the original didn’t get the respect it deserved – too bright, too cartoony, too tied to casual mobile games – but in its character-based gameplay and witty appropriation of CoD clichés, it was a seriously smart online shooter.

Well, Garden Warfare 2 is a bigger, better version, complete with more characters, more maps and more modes. Perhaps the biggest surprise about this sequel is that, after the patchy releases of other big-name shooters – Star Wars: Battlefront and Splatoon, we’re looking at you – this one launches feeling complete. There’s no three-month wait here for the rest of the package to be released.

It’s still primarily an online multiplayer game, pitching teams of walking, blasting vegetation against teams of grey-skinned, goggle-eyed morons. All the same, it might be a while before you notice. After a short opening cinematic you’ll find yourself a sunflower on the wrong side of town – or Zomburbia as the locals call it.

This ‘Backyard Battleground’ is Garden Warfare 2’s central hub, open for exploration with activities scattered through, including some addictive target-shooting mini-games and a simple variant of the classic Horde/Firefight game style. At either end sits the plant and zombie HQs, where you can change character, switch sides and get stuck into rest of the game’s solo content. 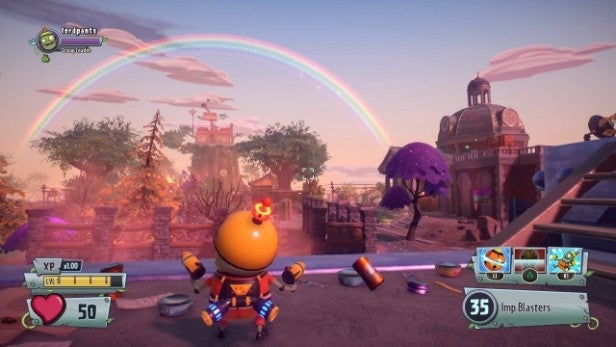 Solo content? It turns out that both the plants and the zombies have their own parallel campaigns, following the valiant veg on a career in tactical espionage action and the brains-obsessed zombies on a mission to make it to the top of Doctor Zomboss’s team.

Sure, break it down, and each is little more than a series of matches against CPU-controlled enemies, broken down with the odd search or fetch quest. Even then there’s a tendency to rely on simple base defence missions. Raise a garden or a tomb, place junior plants or zombie bots in the pots or soil provided, then fight off wave after wave of foes. Rinse and repeat.

Yet there’s some fun stuff going on here, whether you’re leading pint-sized zombies to a picnic or trying to break up a plant party. It’s a chance to get to grips with the core mechanics and the different characters – not to mention bag some loot and level up.

In each HQ you’ll also find a console to access each side’s Garden/Graveyard Ops mode; another series of Horde-style missions, which you can enjoy solo with AI comrades, split-screen with another player or online with up to three friends. And it’s here you’ll discover the multiplayer portal, enabling you to go straight to the various competitive modes. Again, it’s nice to see the option to practice these solo with bots. 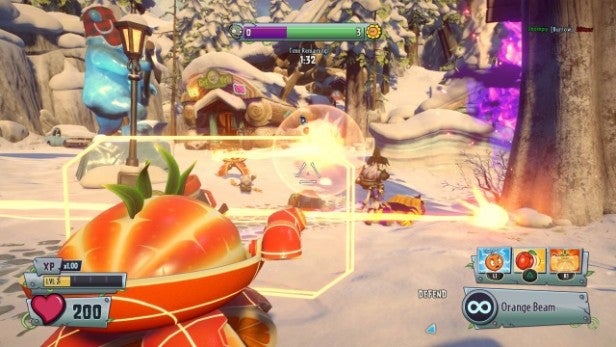 It’s not really the modes that make Garden Warfare 2 special. Most are based on classic CoD or Battlefield game types, and some even refer directly; it’s not hard to work out where Vanquish Confirmed got its name. Beyond simple team deathmatch there’s a fun bomb mode featuring explosive garden gnomes, plus the two Battlefield-esque large-scale modes, Herbal Assault and Gardens and Graveyards.

The latter you’ll be familiar with from the original, with the plants defending a series of objectives against zombie assaults, but Herbal Assault spins that around with the plants attacking and the zombies defending. However, both modes now come with but a twist in the final zone. In the Seeds of Time map, for example, the endgame sees our two teams vying to push giant balls into plant or zombie holes. In the Zomburbia map, the plants do their best to spoil a zombie graduation party. 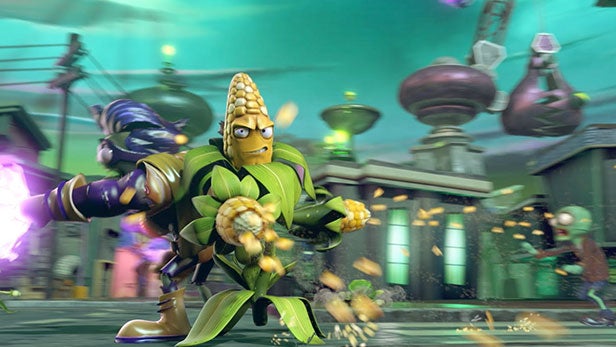 Citron is a heavily-armed orange with a high-damage beam weapon and shield, not to mention the ability to transform into a ball and roll around the map. Rose is a fast-moving sorceress, able to become invulnerable to damage for short periods of a time, slow down zombies with a time snare or transform them into goats. Finally, Kernal Corn (see what they did there?) is a new assault troop packing dual cob-blasters and a beefy long-range missile. His signature move? A cooler-than-cucumber somersault over enemies, hailing gunfire from above as he goes.

And on the zombie side? Well, Captain Deadbeard the zombie pirate has a cool musket that switches between shotgun and carbine modes, not to mention a parrot for reconnaissance and aerial attacks. Up close he can transform into an exploding barrel – great for sneak attacks – while he can leap on a powerful cannon to take out tougher plants at range.

Super Brainz, meanwhile, is a beefy Zombie superhero with a death beam and a range of whirling, punching and high-speed kick moves. They’re joined by the Imp – a seemingly weedy mini-zombie with a jetpack, but one who can call down a Titanfall-style Z-Mech to pilot once the ability charges up. Climb into that bad boy and it’s time to turn the tables, blasting the fiendish fruit and veg with missiles and machine-gun fire. 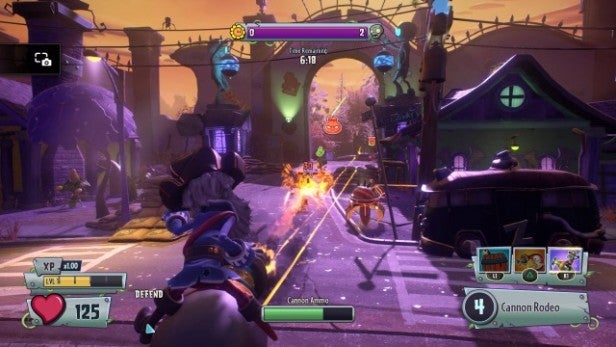 On their own, the different characters add variety, excitement, and even some tactical depth to the action. Sure a Battlefield or CoD might put you as a sniper, support class or medic, but can you transform into the a-maize-ing actobatic Kernal or a vengeful whipper-snapper in a walking tank? No.

Yet there’s more. While you battle, you earn experience points and coins. The former level you up, giving you access to a range of ability upgrades. Fancy a faster health recharge, lightning or fire-enhanced melee attacks? All you need to do is put in the hours. 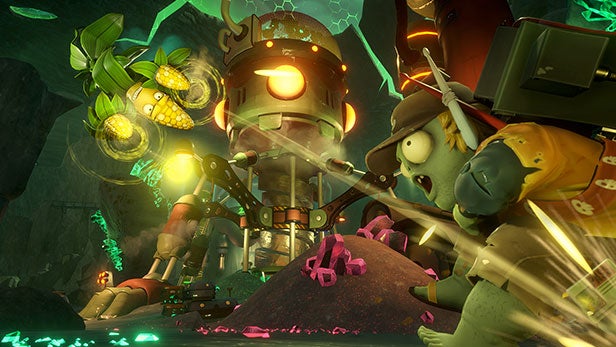 The coins, meanwhile, can be used to purchase sticker packs. Some stickers simply provide zombie bots or plants to use in the pots and grave plots provided, enabling you to surround your garden or tomb with a range of traps, health rechargers, turrets and the like. Others unlock cosmetic customisations, so that you can treat your fave plants and zombies to new gear.

Best of all, though, are the stickers that combine together to open new plant and zombie variations, complete with distinctive costumes and different attacks.

Here’s where things get tricky. In one way, the sticker packs, levels and upgrades are a strength, giving Garden Warfare 2 both long-term hooks and a sense of progression. In another way, however, they’re a weakness. Though the upgrades and character variations don’t seem hideously overpowered, I’m never too sure about systems that give the most experienced and committed players even more of an edge over more casual players – especially in what was previously one of the easiest-going shooters around.

What’s more, the pace of progression could best be described as glacial, and as experience applies only to the current character, you’re encouraged to stick to just one type. That’s not great in a game where certain characters work best with certain game types, or where enemy choices or strategies might make changing character a wise idea. 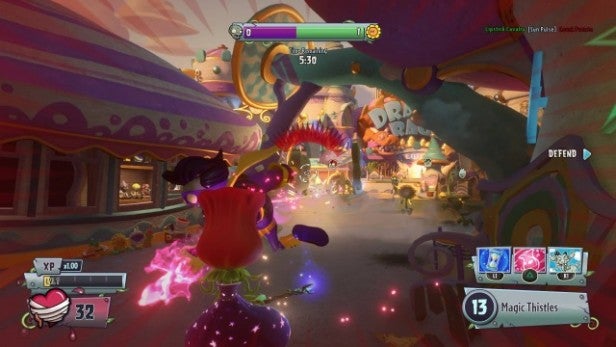 We’re also not 100% sure about the balancing. While most of the characters have a rough equivalent on the opposing side, certain options – specifically Rose and Kernal Corn – seem just a tad overpowered. One of the Gardens and Graveyards maps – Great White North – seems to favour the defensive team, while the Imp might be a little too vulnerable outside of its killer mech. We could be wrong, though. This is the sort of game where new tactics or the right abilities can right what seems an unbalance overnight.

And Garden Warfare 2 can get away with this stuff better than some other shooters, just because the action is so frenetic and chaotic. While there are times when you wish the characters moved a little faster – there’s no sprint button – confrontations tend to be less about who can shoot who first in the head, and more about who work the map, harness their abilities and fight as a team.

It’s no Battlefield, but you’ll soon note that teams where long-range snipers, faster-moving shock troops and medic/support types work together do better. Players who know when to use their special abilities prosper over those who run for the objective, firing madly. 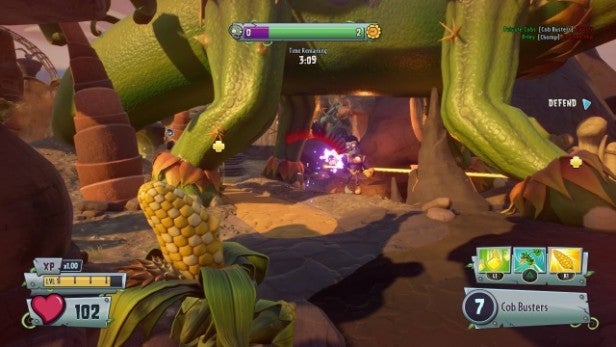 Personality counts here as much as gameplay – and maybe even more. Garden Warfare 2 is one of a handful of family-friendly shooters, but like Splatoon it’s one where the lovable quirky humour only adds to its charm. It helps having cartoon graphics that wouldn’t disgrace many CGI TV cartoons, but each zombie is designed and rendered with a childish glee for the silly and macabre, while the maps have the same 50s sci-fi meets horror meets sugar-rush feel.

Where so many other shooters seem stressed-out or po-faced, Garden Warfare 2’s bonkers brand of anarchy makes it almost impossible to have a bad time. Even when you fail on an epic scale, it feels like fun.

All the frenetic excitement of Garden Warfare, but with more characters, more maps, more modes and a ton more fun. Slow movement and some minor balance issues cramp the style, but if you’re looking for an online shooter with more belly laughs than headshots give the zombie meatheads and violent veg a spin.