The Plantronics Voyager Legend UC works with phones, tablets and PCs. Plantronics even includes a USB Bluetooth dongle in the box in case your computer doesn’t have built-in Bluetooth.

Setting it up to work with your devices couldn’t be much simpler. You just turn it on and either press and hold the call button, or tap the voice button and say ‘Pair Mode’. The headset also supports Bluetooth Multipoint, so you can have it paired with two phones or devices at the same time.

We tested the headset with a range of devices including the HTC One X , LG 4X HD, an Acer Desktop PC and a Sony laptop, and it performed flawlessly with them all. The range was generally very good too. For example, the signal happily passed through multiple rooms with plasterboard walls in a London terraced house, although it’s less successful at finding its way through solid brick walls, but that’s something that taxes all Bluetooth headsets in our experience. 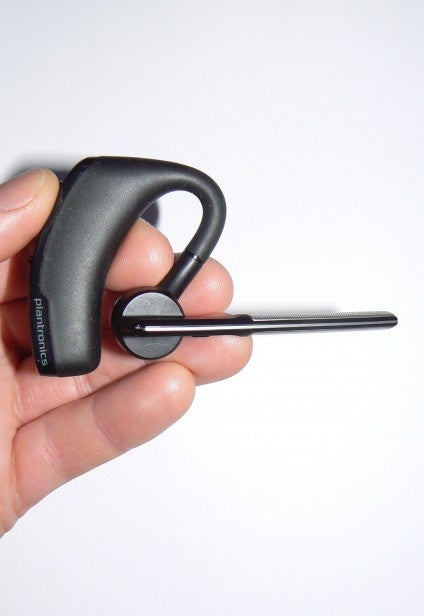 Given the size of the headset we weren’t really convinced that it was going to be all that comfortable to wear for prolonged periods. However, the Legend happily put us right on that one fairly quickly. Once it’s properly in place it not only feels very light, but is also quite un-intrusive to wear. In fact, after ten minutes or so it’s actually fairly easy to forget that you’ve actually got it strapped to your ear.

When wearing it, it also becomes quickly apparent just how good the layout of the controls is. They’re very easy to find with your finger tips, saving you the hassle of having to take the headset off just to check that you’re, say hitting the call button instead of tapping the volume up button, as you do with some smaller headsets we’ve used.

We also like the automatic sensing technology built into this model, that allows it to tell when you’ve put it on and when you’ve taken it off again. For example, if you’ve got an incoming call and put the headset on it’ll automatically take the call on the headset, while if you’re on a call and take the headset off it’ll transfer the call back to your phone’s earpiece instead, which is neat. 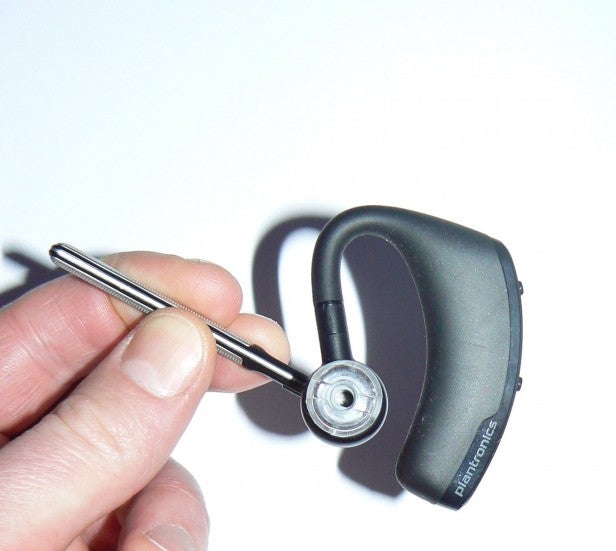 The Legend also has onboard voice announcements to make it easier to use. For example, when you start it up a nice American lady says ‘Power On’ and then tells you how much battery time is left.

The headset also support some voice commands. If you press the voice button on the bottom of the boom you can say commands such as Check Battery, Pair Mode, Am I Connected?, Redial and Cancel. 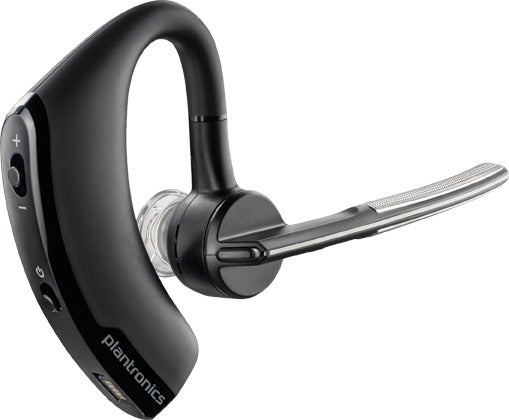 Where the Voyager Legend really excels is in terms of call quality. The ear piece is louder and clearer sounding than many other models we’ve tested, and its noise cancellation is also truly excellent. Plantronics has added three mics to the headset, as well as some advanced DSP processing to help it suppress background din when you’re on calls.

Even when used on a busy London street in gusty conditions, callers said that it still sounded remarkably clean and clear. It also manages to suppress noise without making speech sound too robotic or metallic, which is no mean feat. Battery life was also very good. Plantronics quotes a talk time of seven hours and a standby time of 11 days, which seemed about right from our experience with the headset.

The Voyager Legend UC is far from the smallest or most stylish model on the market. But if you need a Bluetooth headset to use for prolonged periods throughout the day, you’ll find its comfort, long battery life, ease of use and excellent noise suppression capabilities make it worth the admittedly high asking price.