The biggest annoyance with headphones has always been the cable. Every time you go to fish your cans out of your pocket, somehow the headphone cable always seems to have tangled itself up. Of course, most of us now use our phones as our music players, and as these usually have Bluetooth onboard, we can finally free ourselves of wires and opt for a wireless stereo Bluetooth headset instead. If this is your plan, then Plantronics wants to tempt you with its BackBeat 903+, which not only enables you to listen to your tunes wirelessly, but also doubles up as a hands-free device so you can use it to make calls with your mobile. 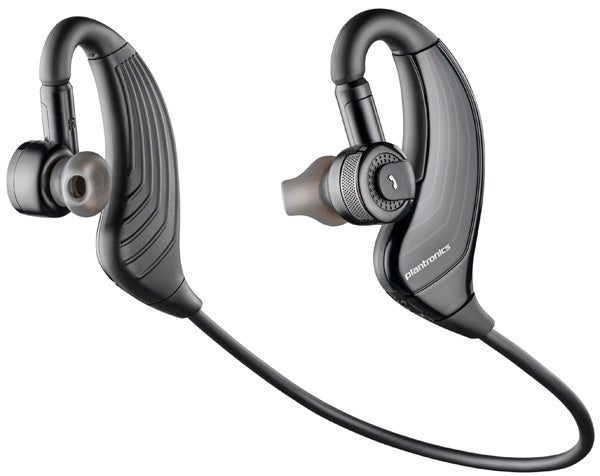 Previously, the BackBeat range was sold under the Altec Lansing brand name, but this update of the 903 headset has now been brought into the Plantronics fold. The new model includes a number of tweaks and updates. For example, the headset is now constructed out of a sweat resistant material making it more suitable for use down the gym; if you’re using it with an iPhone there’s an onscreen battery life indicator; and there’s a new telescopic section on the ear pieces so you can adjust them to better fit your lugholes.


Straight out of the box, these aren’t the most attractive looking headphones we’ve seen. Rather than using an over-the-head or back-band design, Plantronics has instead gone with two distinct earpieces, connected together via a short, sturdy cable at the rear. Like the other BackBeat models in the range, they tend to look a bit like 1970’s hearing aids when you’re wearing them – not a great look in 2011. The earpieces are quite chunky and they can be awkward to put on your ears if you’re wearing glasses or shades. However, the telescopic sections on the earpieces do improve overall comfort and once the headphones are actually in place they tend to stay in place. 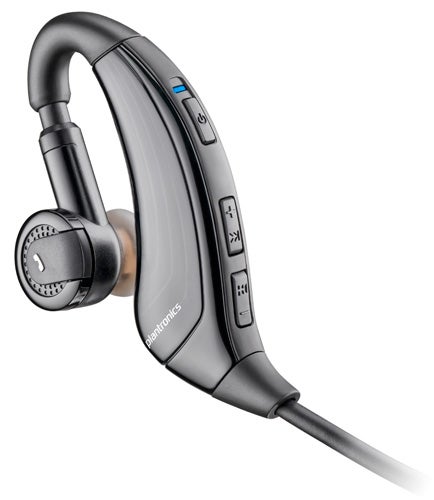 The left-hand earpiece is home to most of the controls. On the top, there’s a power button that’s not only used for turning the cans on and off, but also for putting them into pairing mode. The first time you turn on the headset it automatically enters pairing mode, but after that to re-enter it you simply press and hold down the power button until the small LED above the button starts to flash red and blue.


As with most headsets, the pairing process is straightforward; it’s simply a matter of entering pairing mode, doing a Bluetooth search on your phone or computer and then entering the standard 0000 passcode if it’s requested. Unfortunately, the BackBeat 903+ doesn’t support multipoint, so you can’t have it hooked up to a mobile phone and PC at the same time, for example, like you can with some other headsets on the market.


Below the power button, two volume controls double-up as forward and back track skip buttons. To adjust the volume you just tap each one once, whereas if you want to skip a track you press and hold them down. The headphones will then announce ‘track backward’ or ‘track forward’ to let you know they’ve registered the command.


On the side of the left earpiece is a big call button that you tap once to accept an incoming call or start a new call. If you tap it twice, your phone will redial the last number. There’s a similar button on the right-hand ear piece, but this is used for playing or pausing music tracks. If you hold in this button for two seconds, it will activate the bass boost mode that adds a considerable amount of extra bass to proceedings – this is very useful as the compression used on Bluetooth music streaming generally leads to a loss of depth at the bottom end of the frequency spectrum.

The headset is charged via its micro-USB port and Plantronics includes a power adaptor in the box. The BackBeat takes around three hours to charge and once it’s full of juice Plantronics says it’s good for about seven hours of music listening or talk time. In our experience, we tended to get between six and seven hours out of it, so this figure seems pretty accurate. 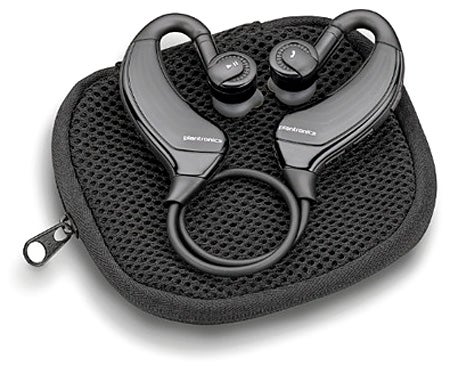 When you hook the headphones up to an iPhone, you’ll see a small indicator at the top of the screen next to the iPhone’s normal battery icon. Alternatively, you can check the battery level by tapping the power button once. The headphones will then announce through the earpieces how much listening time is remaining. The BackBeat will also beep three times once battery life gets down to the ten-minute mark to give you a chance to recharge it before it runs out of juice.


As well as the A2DP profile for stereo audio over Bluetooth, it also supports the AVRCP profile so you can use the controls to navigate through your music tracks. However, earlier iPhones using iOS versions prior to 4.1 don’t fully support AVRCP, so only the play/pause button will work on these models. 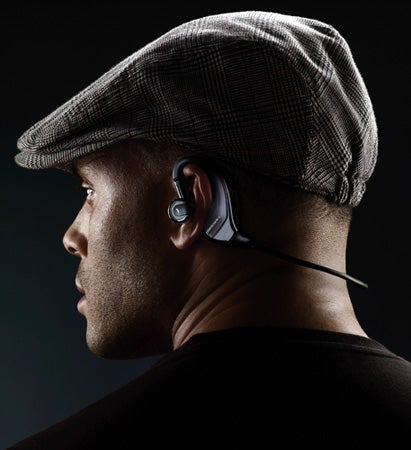 No stereo Bluetooth headset is perfect when it comes to audio quality. The A2DP profile that’s used for transmitting audio over Bluetooth only has 768kbit/s of bandwidth to play with, so audio has to be compressed before it is sent down this link. Unfortunately, the compression tends to drop a lot of bass and causes higher frequencies to sound a bit raspy.


As mentioned before, you can partly get around the lack of bass by using the headset’s Bass Boost function, but the raspiness remains on higher frequency sounds like hi-hats and cymbals. Despite this, the BackBeat remains one of the better sounding stereo Bluetooth headsets we’ve had in for review and while it doesn’t exactly deliver high-end hi-fi audio quality, it does its best to make your music sound as good as possible under the circumstances.


Of course, as well as music playback you can also use the headset to make calls. Like most of Plantronics headsets it has dual microphones and uses the company’ AudioIQ2 DSP processing for noise cancellation. Call quality was generally good, although as with most headsets, callers reported that the audio from the mic can sound a little echo-y from time to time.


The design of the BackBeat 903+ means this headset won’t appeal to everyone and we do think the lack of multipoint support is disappointing. However, it is relatively comfortable to wear, produces decent audio quality and works well as a headset for making calls with your mobile phone. Given its relatively low price tag, we think its well worth checking out if you’re looking for a stereo headset to use with your smartphone.