Over the years, there have been many attempts at making truly portable printers, with the idea being for them to accompany busy people and their laptops. Most of them, though smaller than their desktop cousins, are still bulky machines, requiring a separate bag to carry them. PLANon’s PrintStik PS910 is quite capable of slipping into the average laptop bag, though, and doesn’t even require you to carry a supply of paper.

This metal and plastic stick is quite unconventional in design. It’s around a third wider than a sheet of A4 paper (it actually uses a paper roll the width of a US Letter page) and under 50mm high. It weighs under 400g, so is very easy to move about and it will slip into the accessories pouch of a laptop bag and hardly be noticed.


At the top front of its body are two membrane switches, for power and paper feed and three LED indicators, for power, print and battery life. A single, miniature USB socket at the left-hand end of the printer’s body is the only physical connection to the world, though the PS910 is also Bluetooth-compatible and will work with several types of phone, once paired with them. These include RIM Blackberry, SmartPhone and PocketPC devices, though you’ll need to copy a driver across to your host device, before you’ll be able to print to the PrintStik.

The printer uses a thermal print head, running the full width of the paper, to print black pixels onto treated paper. A roll of this paper fits into a holder, which is an integral part of the PrintStik’s mechanism and spare rolls can be bought in packs of six, as the only consumable.


With the paper cartridge in place, you don’t need to carry any separate supplies and the printer can produce up to 20, letter-length pages from a single roll, so about 19 pages at A4-length.

PLANon rates the PrintStik PS910 at 3ppm, but it took us 1:01 to produce a single text page and 1:24 for a page of text and graphics. A 15 by 10cm photo print took a pretty long-winded 2:43. The printer is designed to stop as soon as it sees blank paper at the bottom of a page, to save on thermal paper, but this does make it hard to print full sheets. There’s no automatic cutter, either, so it’s up to you to tear off a page at the appropriate length, when it’s complete.


So, the printer is slow, and also noisy. The kicking it makes as each line of dots is created is rather different from the noises made by inkjet or laser machines and isn’t particularly unpleasant, but it is noticeably loud.


The worst aspect of the printer, though, is the quality of the print produced. It harks back to much earlier days, when prints were only an approximation to the file on screen. Text is dotty, incomplete and irregular, with few characters having complete outlines. While it is readable, it looks decidedly tatty and is only really useful for keeping drafts of documents. 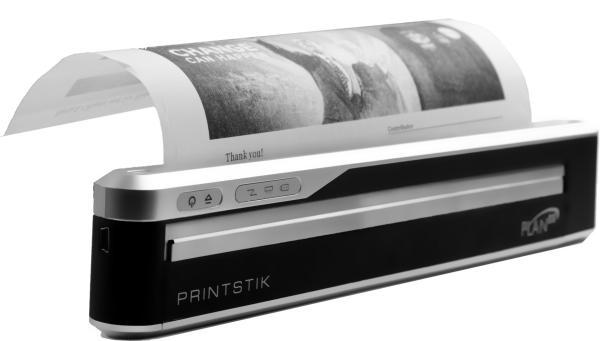 Greyscale graphics can hardly be called greyscale at all, since the patterns of dots which make up different shades are so coarse they look more like cloth textures than shades of grey. Text on top of greyscale fills is almost impossible to read.


Trying to print a photographic image resulted in a grainy, dotty picture with streaks in darker areas and obvious changes of dot pattern in areas of sky. Because the thin, thermal paper is so tightly rolled inside the printer, all the prints come out with a pronounced curl, too, and need to be re-rolled the other way, to flatten them out.


Six rolls of paper, each of which should print 19 or 20 A4 pages, cost £19, giving a cost per page of 15.82p. Although this is high – a typical inkjet page costs under 4p – it’s irrespective of the coverage on the paper, so a full A4 photo will cost no more than a page of text. Quite why you’d want to print an A4 photo on this machine is another question.


Looking at its potential competition, it’s surprising to discover that portable printing is one of the areas of the printer market which are shrinking. There used to be several more models than there are now and your choice is between the PrintStik, Canon’s PIXMA iP100 and HP’s OfficeJet H470. HP’s offering is noticeably cheaper than the PrintStik, but also considerably more bulky, while Canon’s machine is also comparatively large and costs £330.


In both the inkjets’ favour is that they use conventional liquid ink and can produce colour as well as black-and-white prints. They print on plain paper, too, and can even produce colour photos at a pinch.


If you really need a printer which takes up very little room and can print autonomously, without external power or paper, the PrintStik is pretty much your only choice. For any other portable application, though, we’d looked elsewhere.